Thanks for checking out my review of the Steam Crave Glaz Mini MTL RTA which was sent directly from Steam Crave. Before we get into it let’s talk a little about advocacy, something we need a lot of right now.

Our voices need to be heard, We Vape, We Vote! Here is a simple link below to contact the President and your representatives to let them know where you stand. It doesn’t take a lot of time at all and it can really make a difference.

If you want to take it a step further call the White House.

Our voices need to be heard, if we do nothing then all is lost. 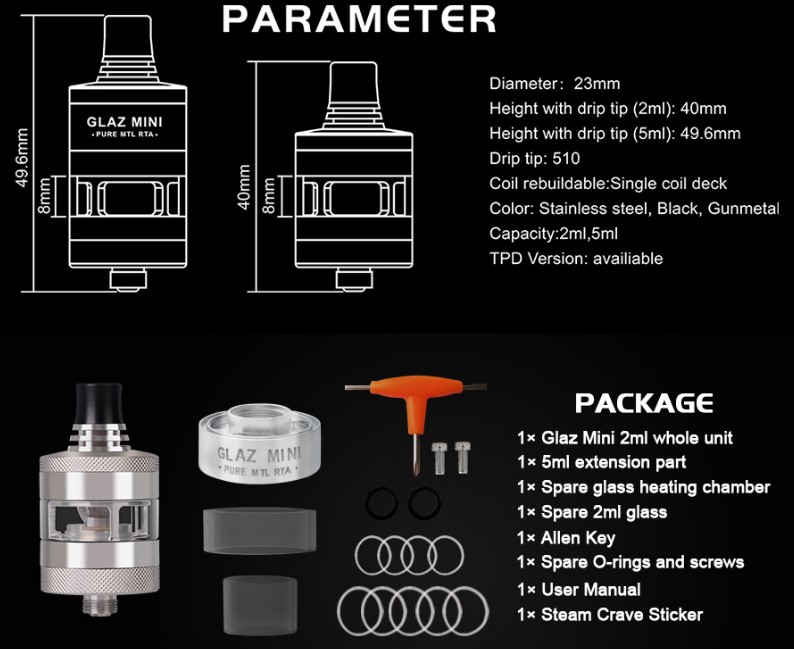 Available in black and stainless steel 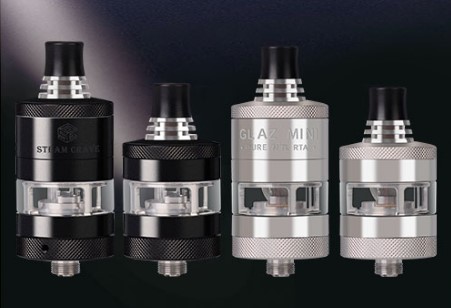 Getting to know the Glaz Mini MTL RTA

Steam Crave is not generally known for MTL tanks, usually clouds bro mother chuckers with tons of flavor….me likes. They did release the Aromamizer Lite recently which I reviewed. It was touted as a restricted deep lung or MTL RTA but I found it to be great for DL vaping, not so much for MTL. They have since added an accessory to make it more MTL friendly which can be found here but I have not tried it myself.

The new Glaz Mini which is the subject of my review is, as they say on the packaging, “Designed for Pure MTL” and yeah, no DL vaping with this one.

I always take a tank apart to clean prior to use in case some machine oil is still present. Giving the Glaz Mini a sniff prior to that it gave off no foul odors so they did a nice job of cleaning it beforehand. Not surprisingly the build quality is what you would expect from Steam Crave, smooth threads, and built like a tank. I was not happy to see the clear o’rings as those have given me problems in the past but these have been much better. Just be careful when cleaning though, some of the o’rings are prone to come off so keep that in mind. 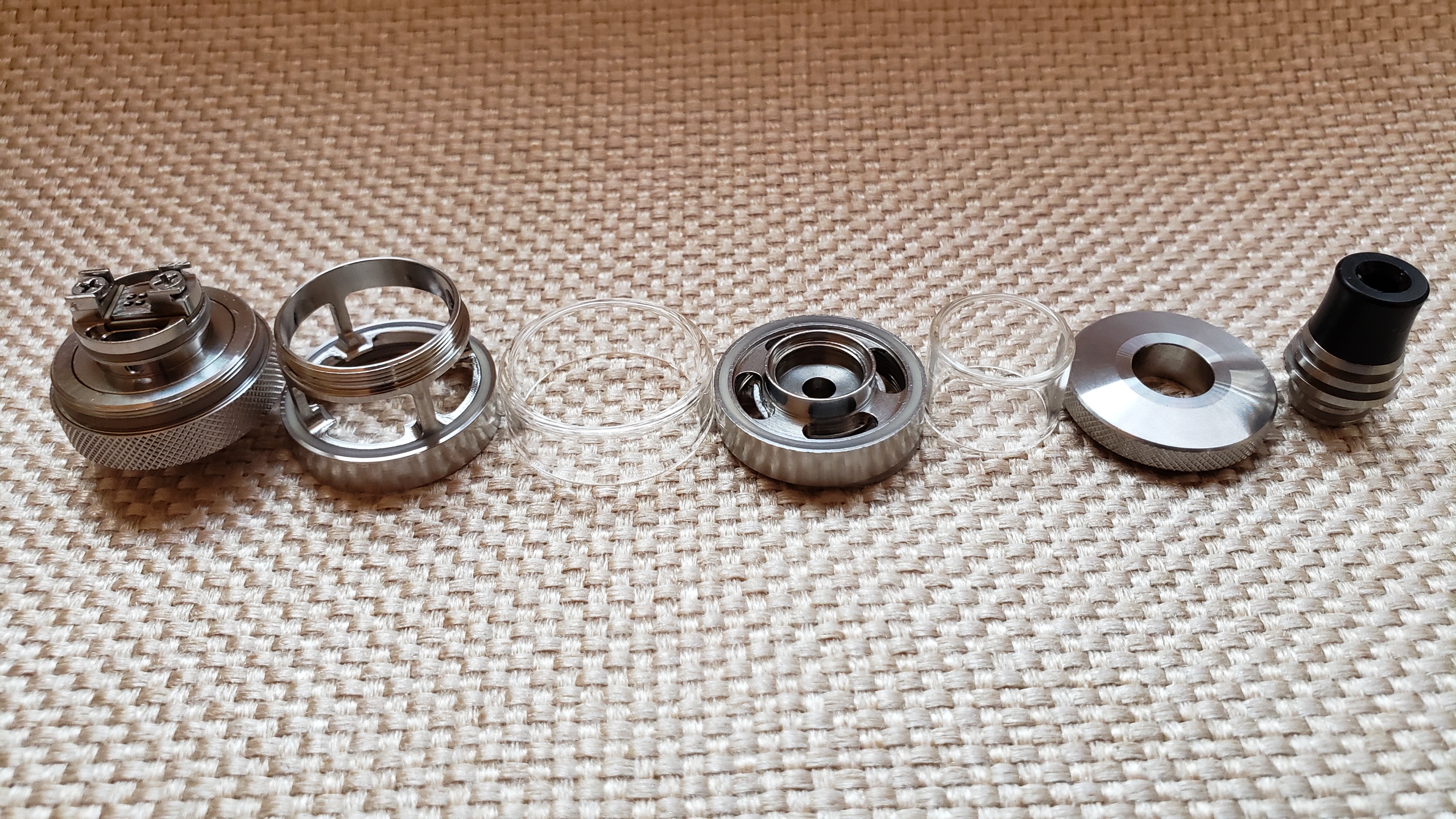 As you can see by the small air holes on the deck, this is a Pure MTL tank for sure. 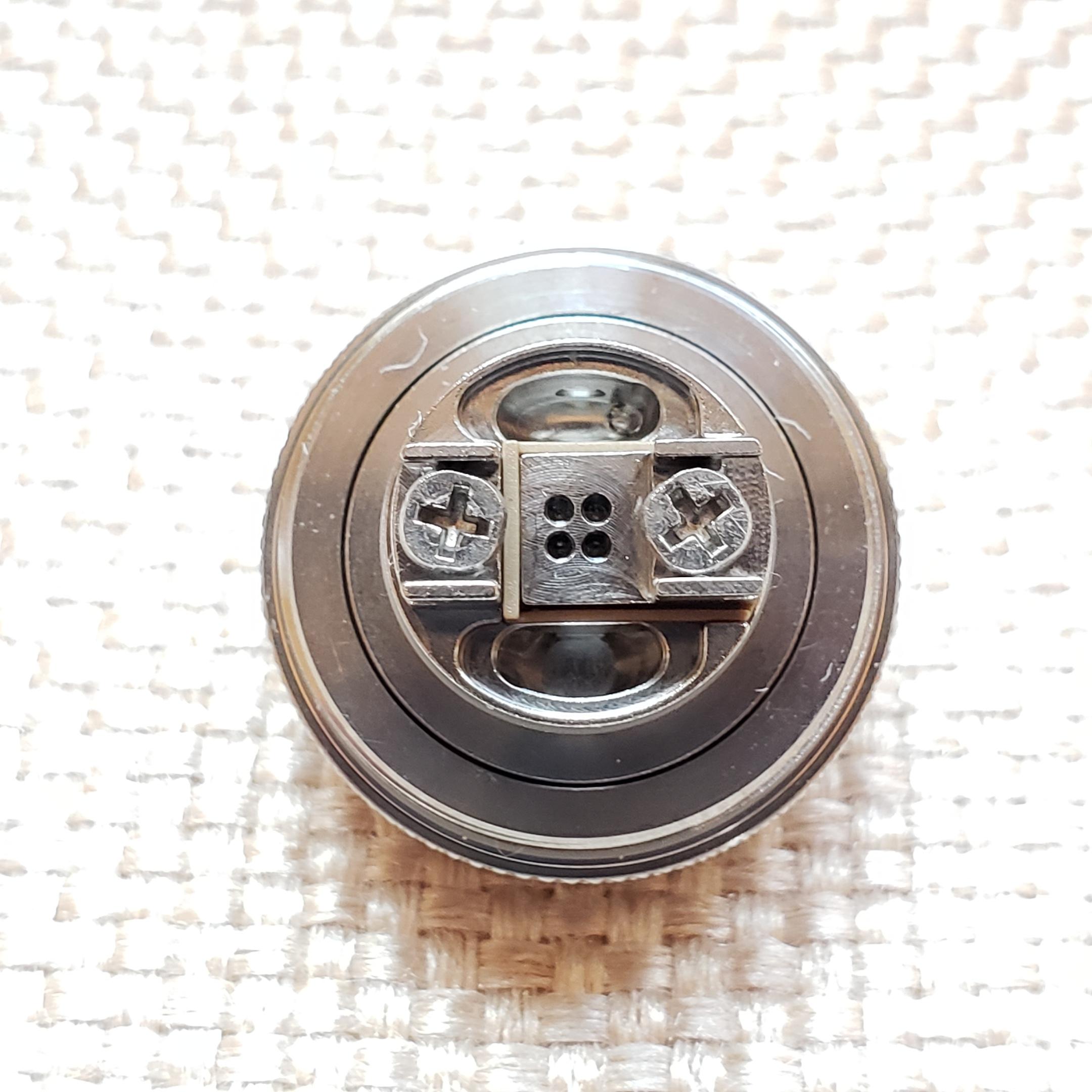 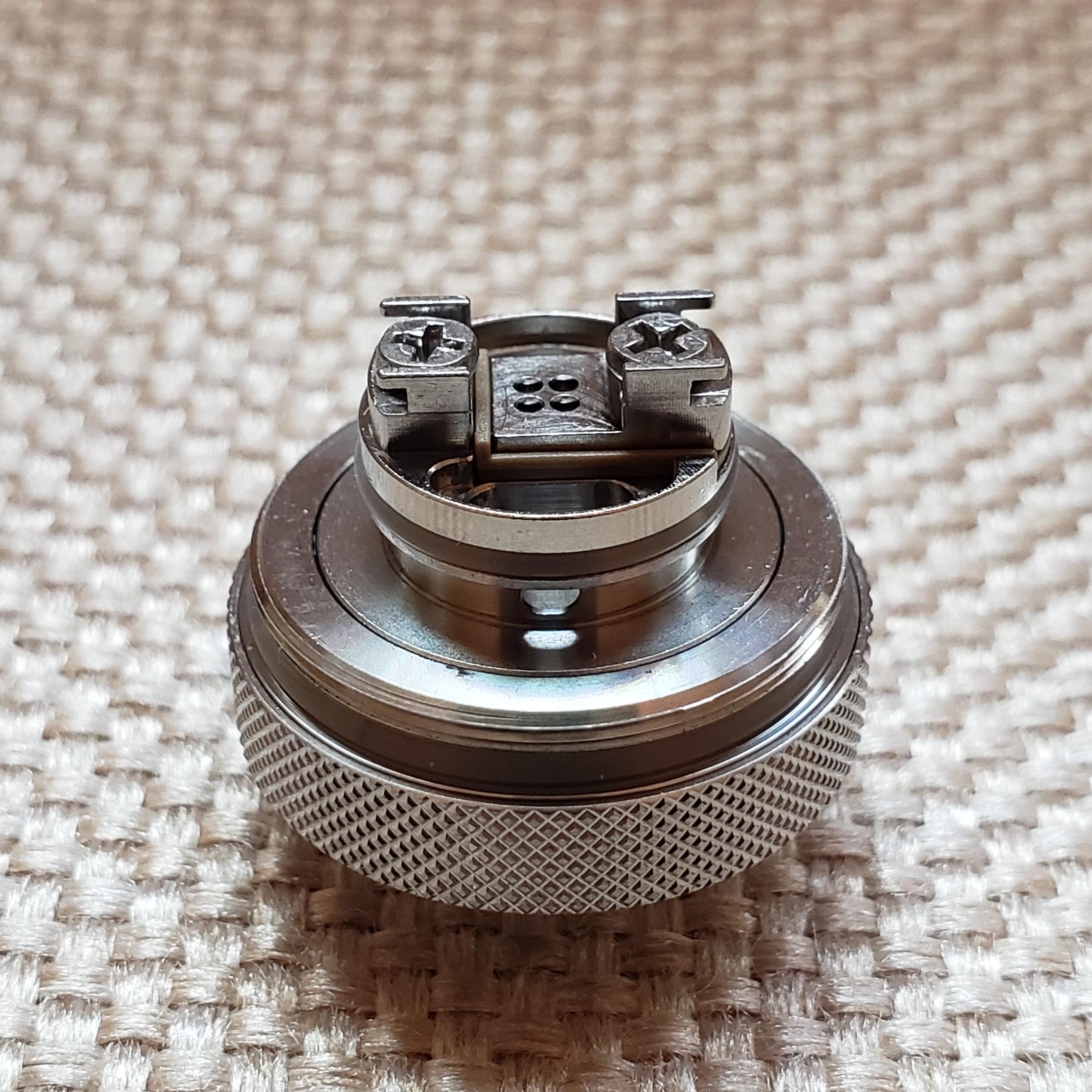 Instead of bubble glass, you get an extension that takes the Glaz Mini from 2ml to 5ml. I generally favor a bubble glass due to keeping the chimney as short as possible but in use, I could not tell the difference and appreciate the cleaner look. 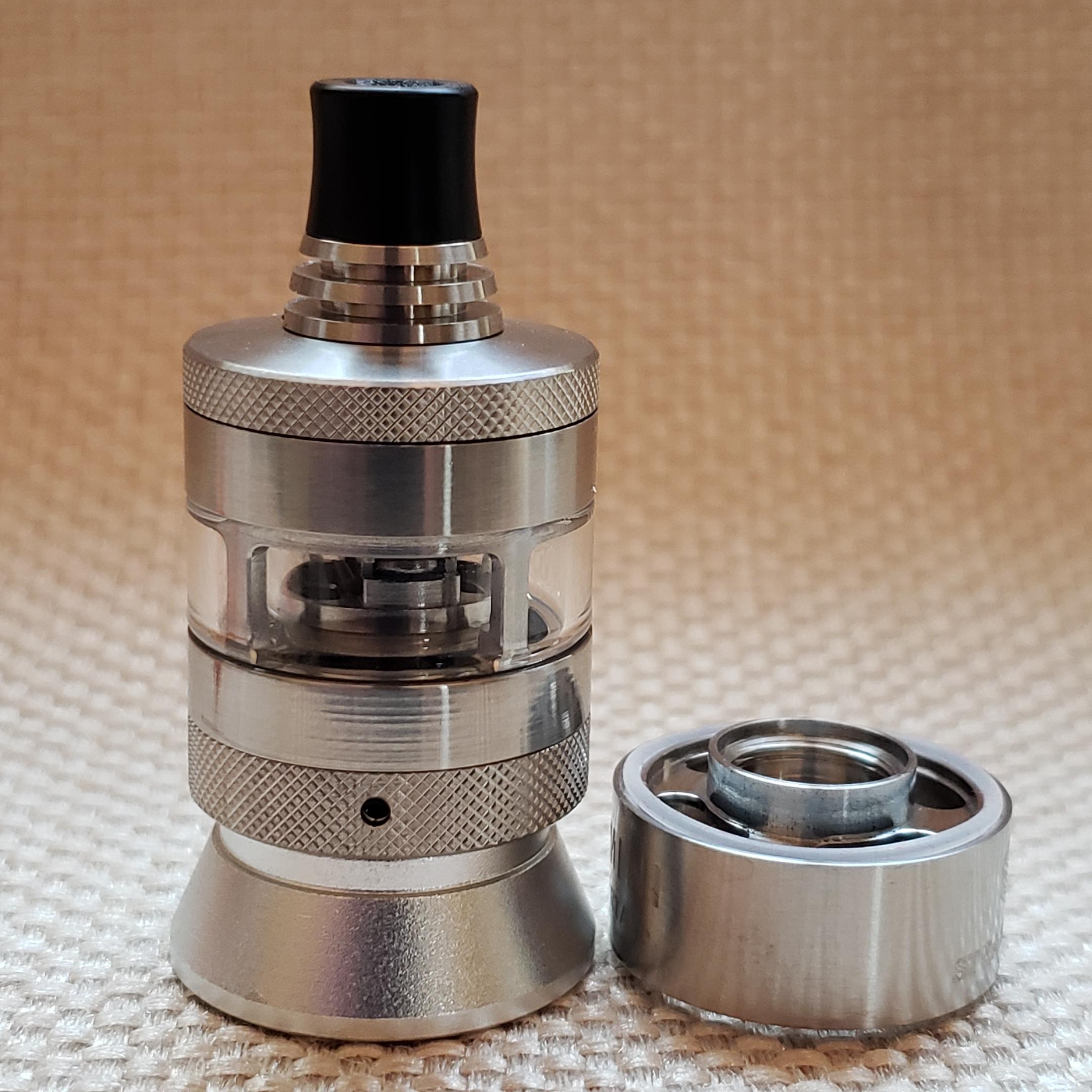 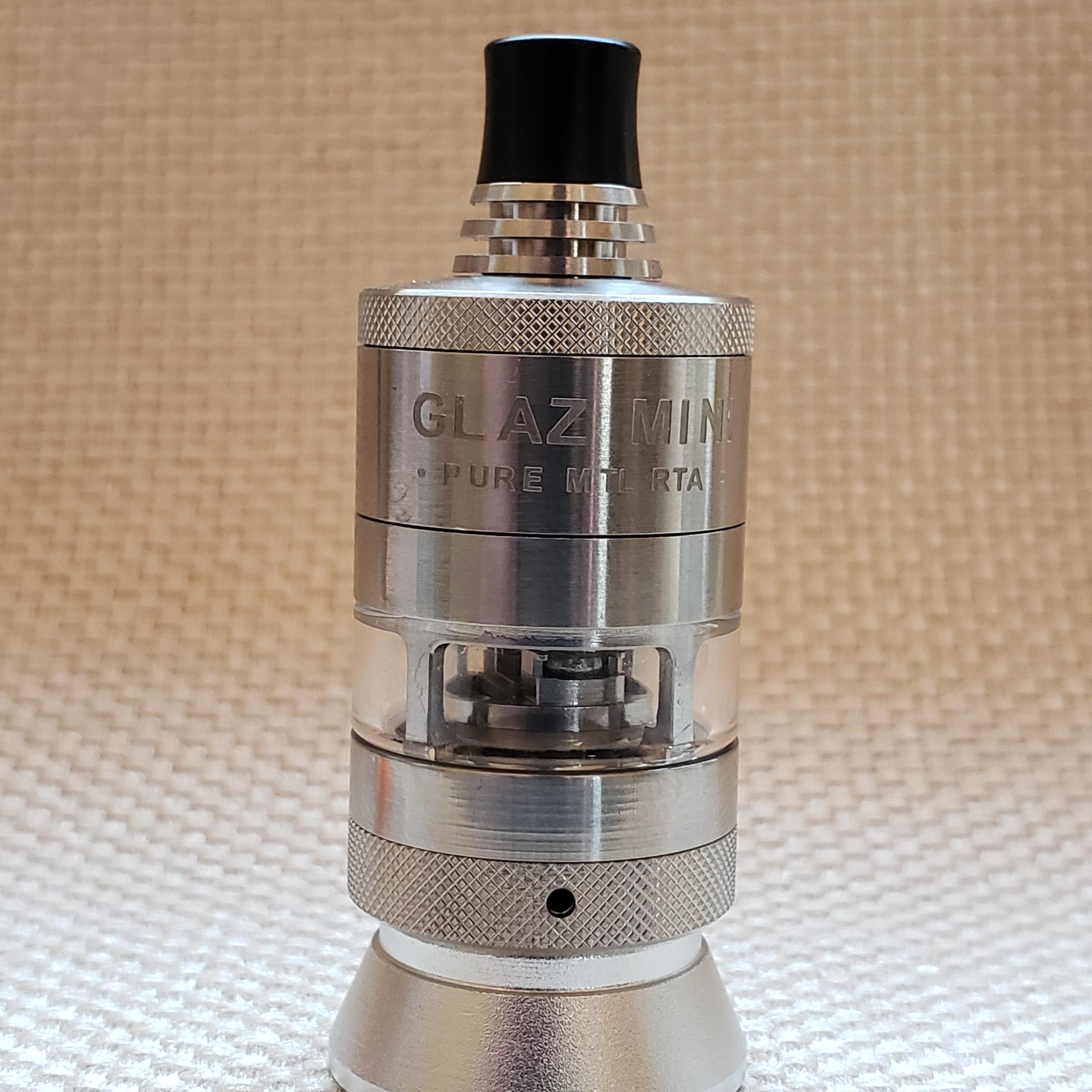 That small airflow hole you see on the bottom, that’s it, no other airflow holes so yeah…..Pure MTL.

Only one 510 drip tip included but it works well. I did swap it out for some of my favorite drip tips but in the end, I continued to use the one supplied. The only bad thing is if you have facial hair like me then sometimes it would snag a bit, never plucked one out or anything but I could feel it.

One thing I did notice while using is there is a gap between the chimney and top cap where condensation will collect. Sometimes there is a noticeable spit back from it and other times not, probably dependent on the build. 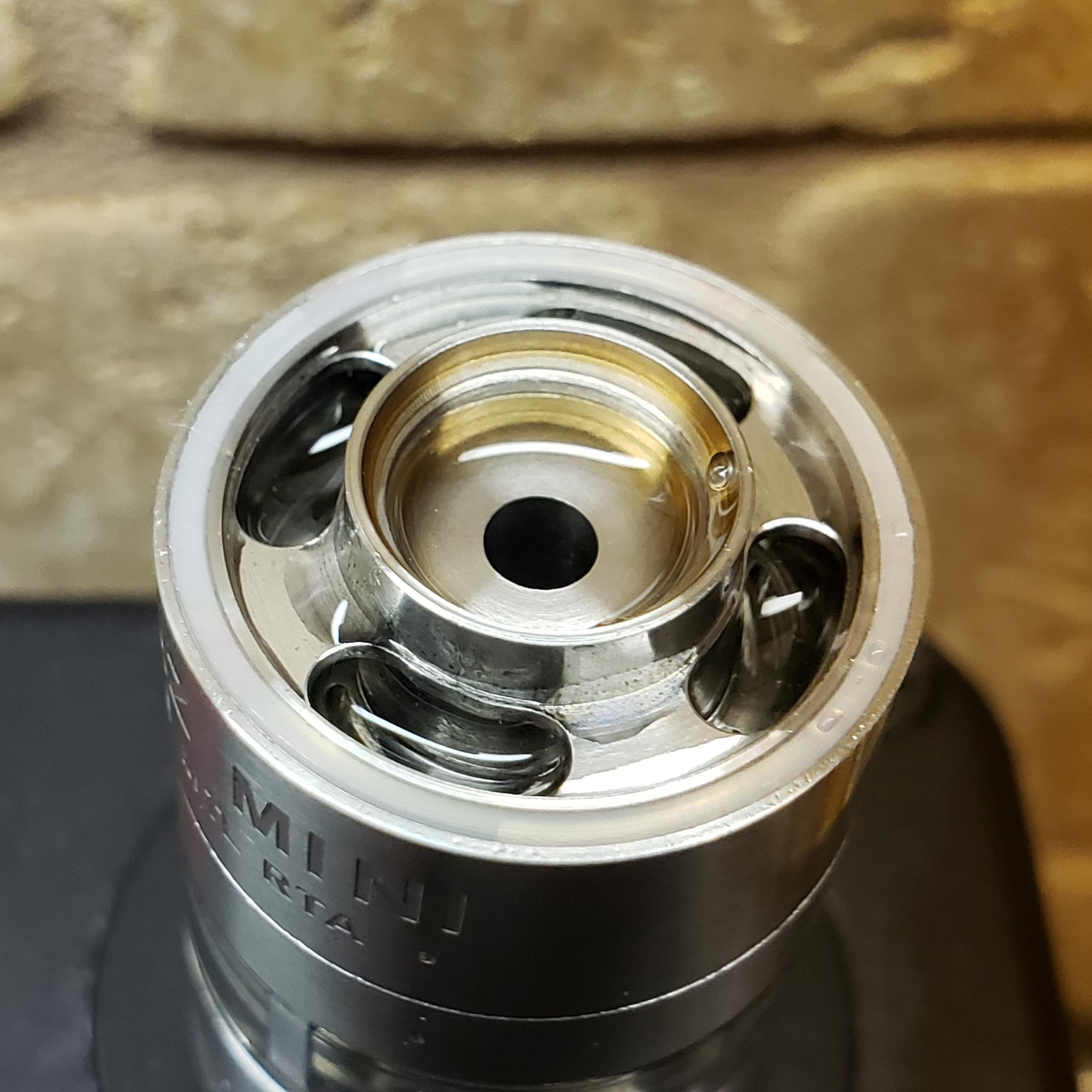 That might contribute to the extra flavor I am getting. Not like I am drinking juice but sometimes I can feel a little on my tongue. I almost forgot to bring it up as I am not experiencing it much right now and when it does happen it does not bother me much.

Now first Steam Crave gives a nice description of the building and wicking in the owner’s manual and it can be found on their website as well.

Since they did such a great job with the tips on the Aromamizer Lite instructions I tried that first. Ho hum was all I can say. First off with a 2mm coil you are not left with much wicking material which means your wicks need to be a little longer to go down further into the wicking slots. After 2 or 3 builds with 2mm coils using single wire and some claptons I decided that was enough, wasn’t working for me. I then went 2.5mm and yeah buddy, flavor improved immensely. 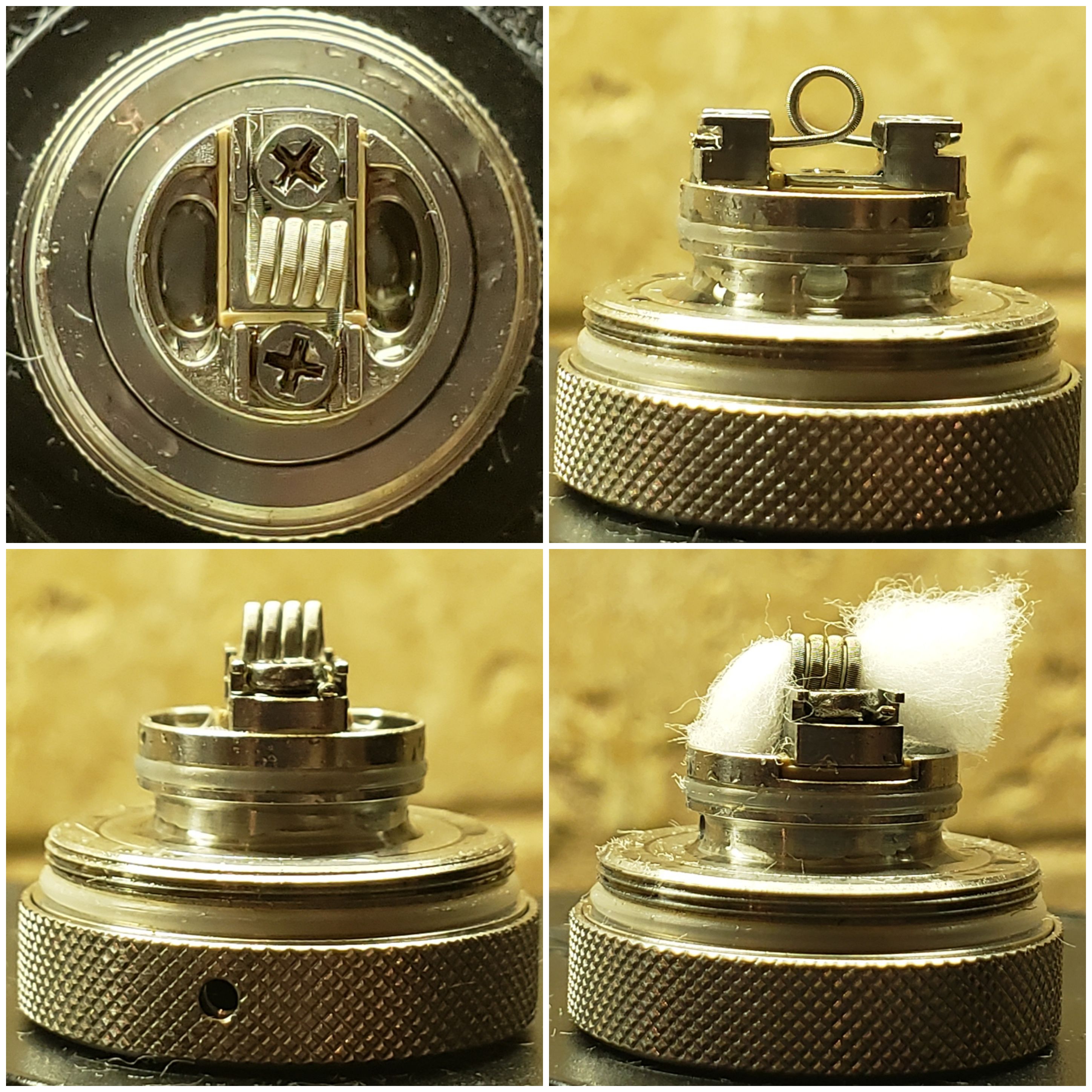 I tried about 5 more builds using a 2.5mm inner diameter with varying results but all better than the 2mm. My favorite was an SS316L tri-core fused clapton 28g inner with 38g wrap. Even though it came out lower than is optimal for MTL at around 0.26 ohms it still vaped great at about 25 watts. The wicking I feel was key to the jump in performance. As you can see in the pic below the wicking slots have a step to them, I just damned up the top step, no cotton down the next step. That kept my cotton soaking wet but no leaking. 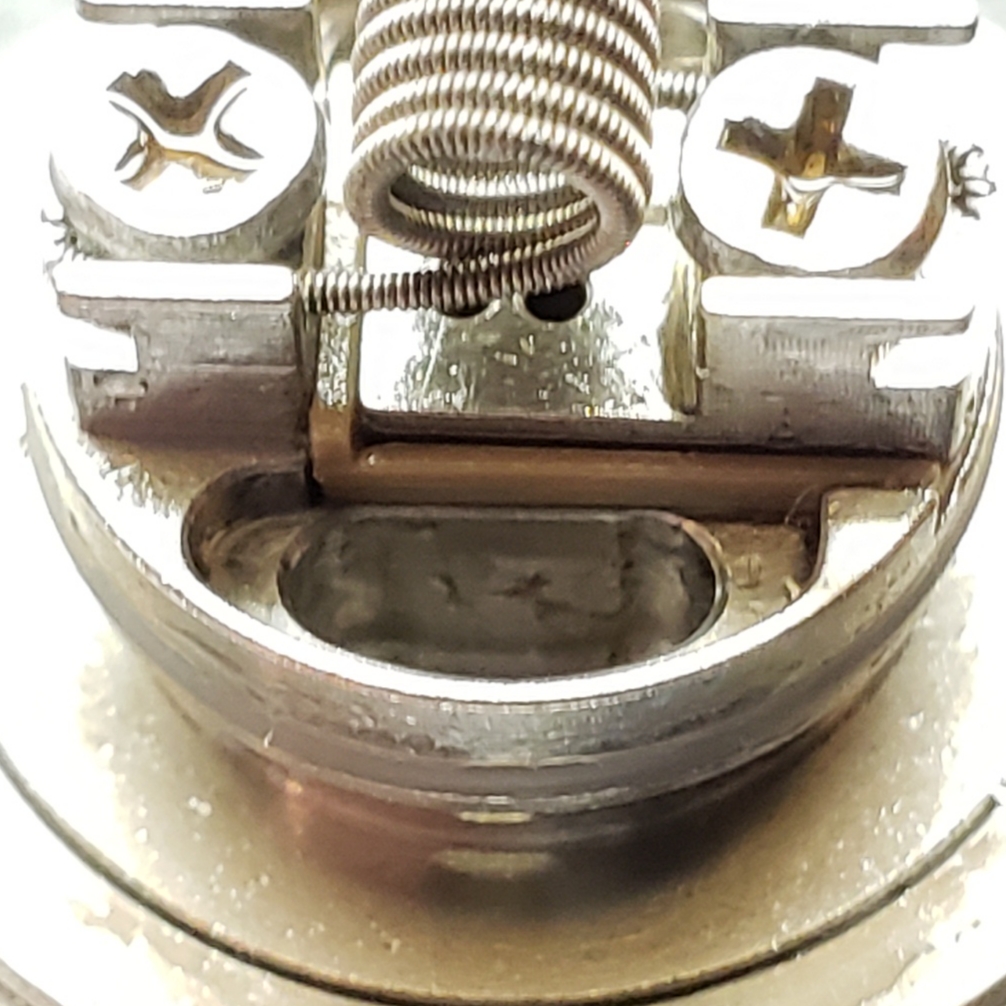 You can only do that with a 2.5mm coil, 2mm will not provide enough cotton. You have to make sure the cotton is tight in the coil, almost where the coil moves then pulling it through. No need to thin out the cotton, just make it nice and fluffy and lay it on the top wicking slot. I can’t tell you how much of a difference this made for flavor.

Cutting your wicks is maybe just a half mm more than the deck, that is all you need. 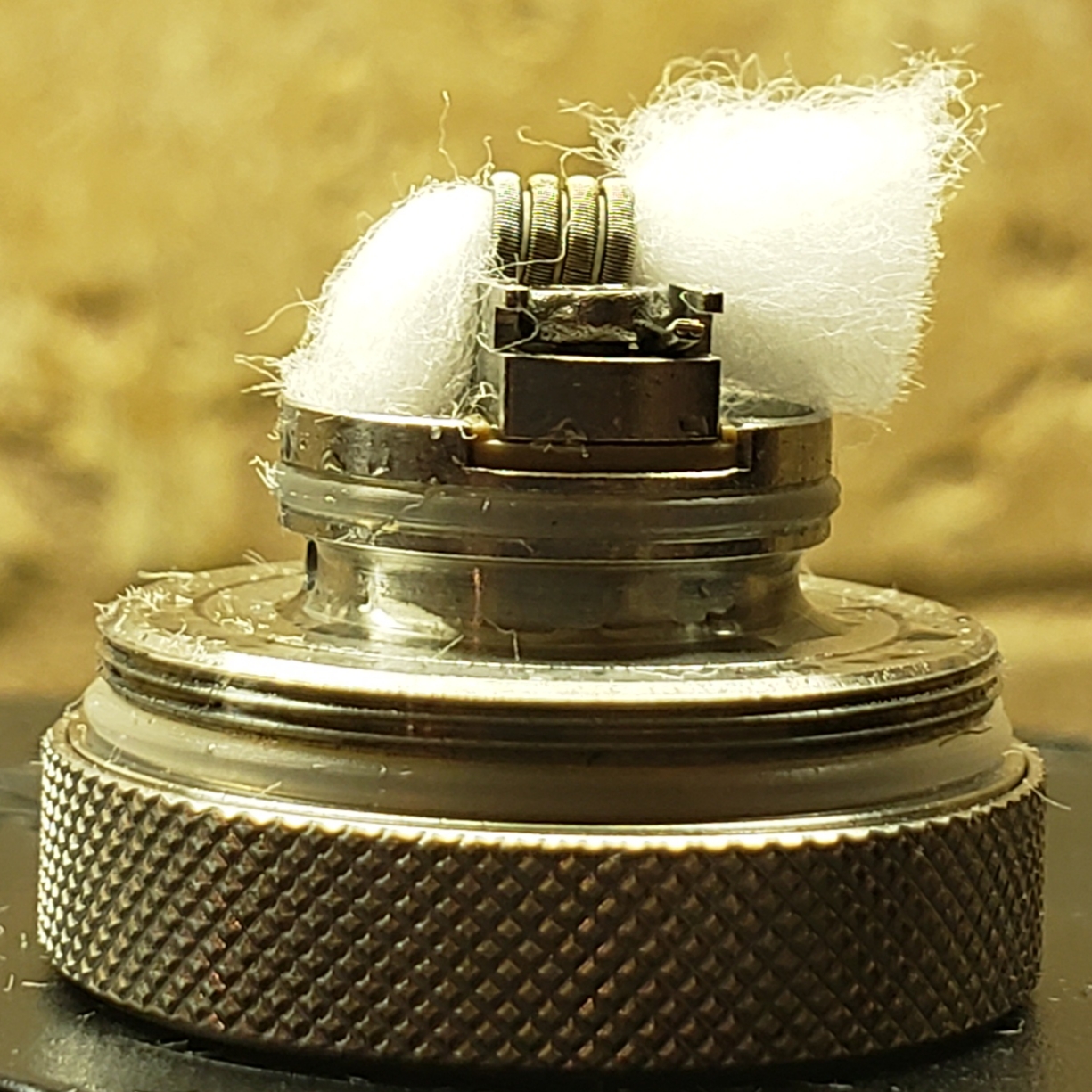 If using round wire you can wrap your leads around the post screw, they designed it that way. 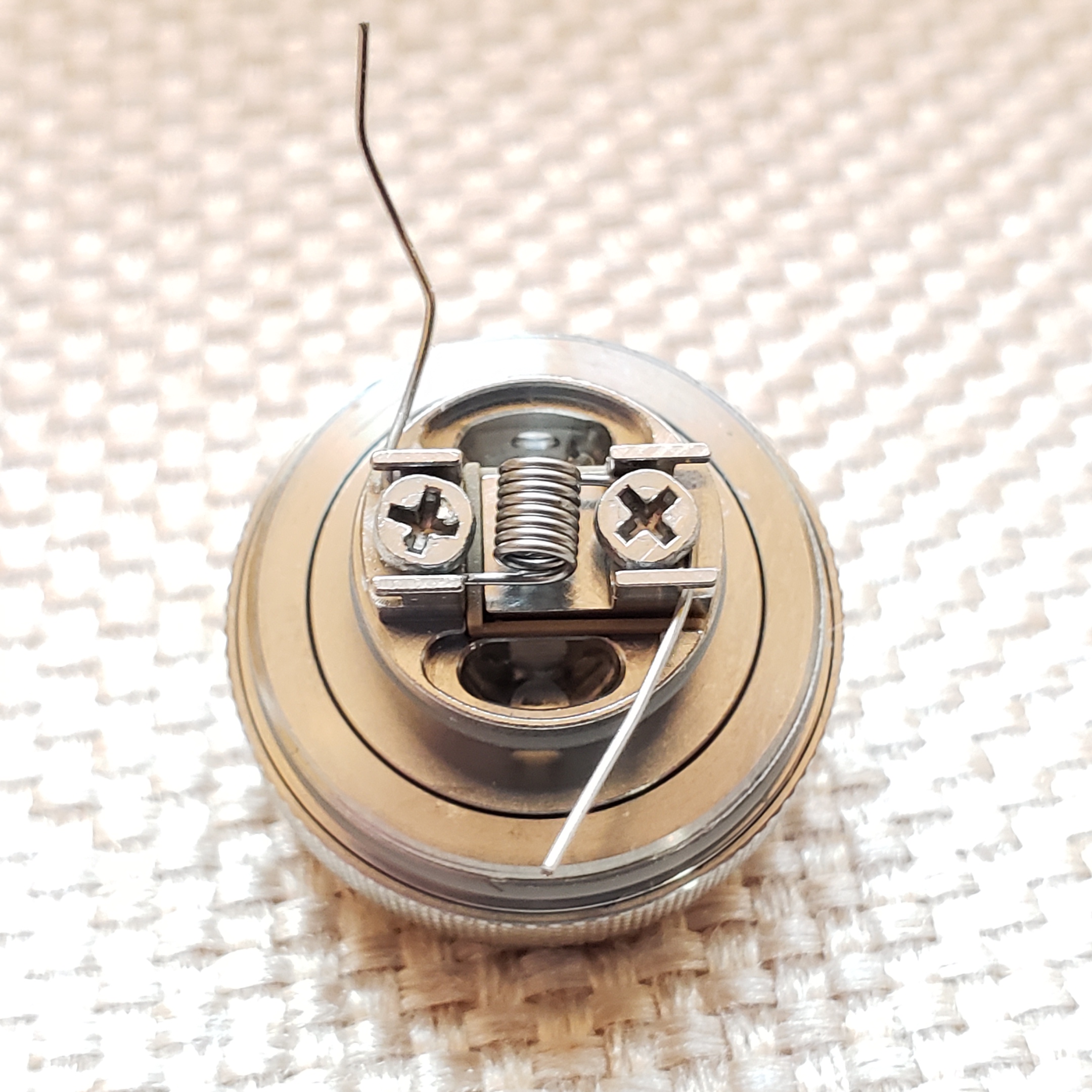 Pretty smart of them to add those notches so you could wrap your wire around for the best contact. Not possible with fused claptons, with those just hold the wire tight against the screw when tightening down. I would have liked to have had a post that screws down onto the wire from the bottom of the screw instead of around the head of the screw. It would have made building a little easier but it seems a lot of MTL tanks are designed this way. Everything held up great after 7 or 8 builds, Steam Crave quality at it again.

To MTL or not to MTL…..oh wait, with this, you HAVE to MTL 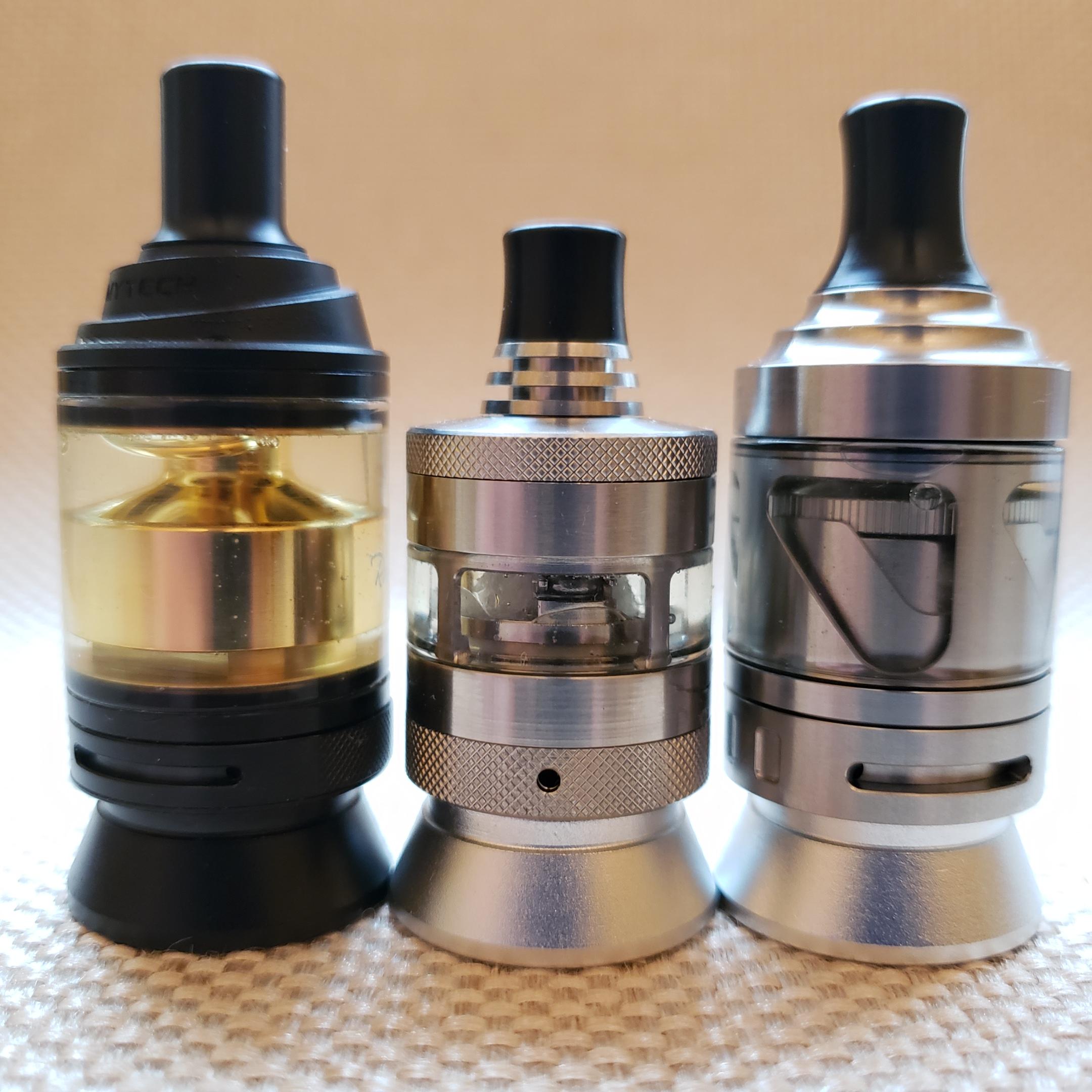 Now pay close attention to the air holes on the Silverplay on the right, and Fumytech Rose on the left. That is how much I had to close them to equal the wide open airflow of the Glaz Mini. Both the tanks mentioned can do a restricted deep lung hit wide open, not the Glaz Mini.

It was pretty clear a few puffs into it that the SIlverplay was the lesser of the other 2 tanks, after finishing off a tank in all of them the Silverplay was put to the side. The Silverplay is not a bad tank but in MTL mode it didn’t shine, it is much better as a restricted DL tank. The Fumytech Rose is a very good tank and at first, it led the pack. Once the Glaz Mini’s build broke in a bit more it was about neck and neck. Some juices I preferred the Rose, other juices the Glaz, it really was that close.

I did place an order for a Digiflavor Siren V2, a MTL RTA I have heard great things about. Unfortunately, it is still a week away but if anyone wants to hear how it compares then please leave a comment and I will update the review.

Always good to see how tanks fit on various mods, I really enjoyed using it on my mini mods. 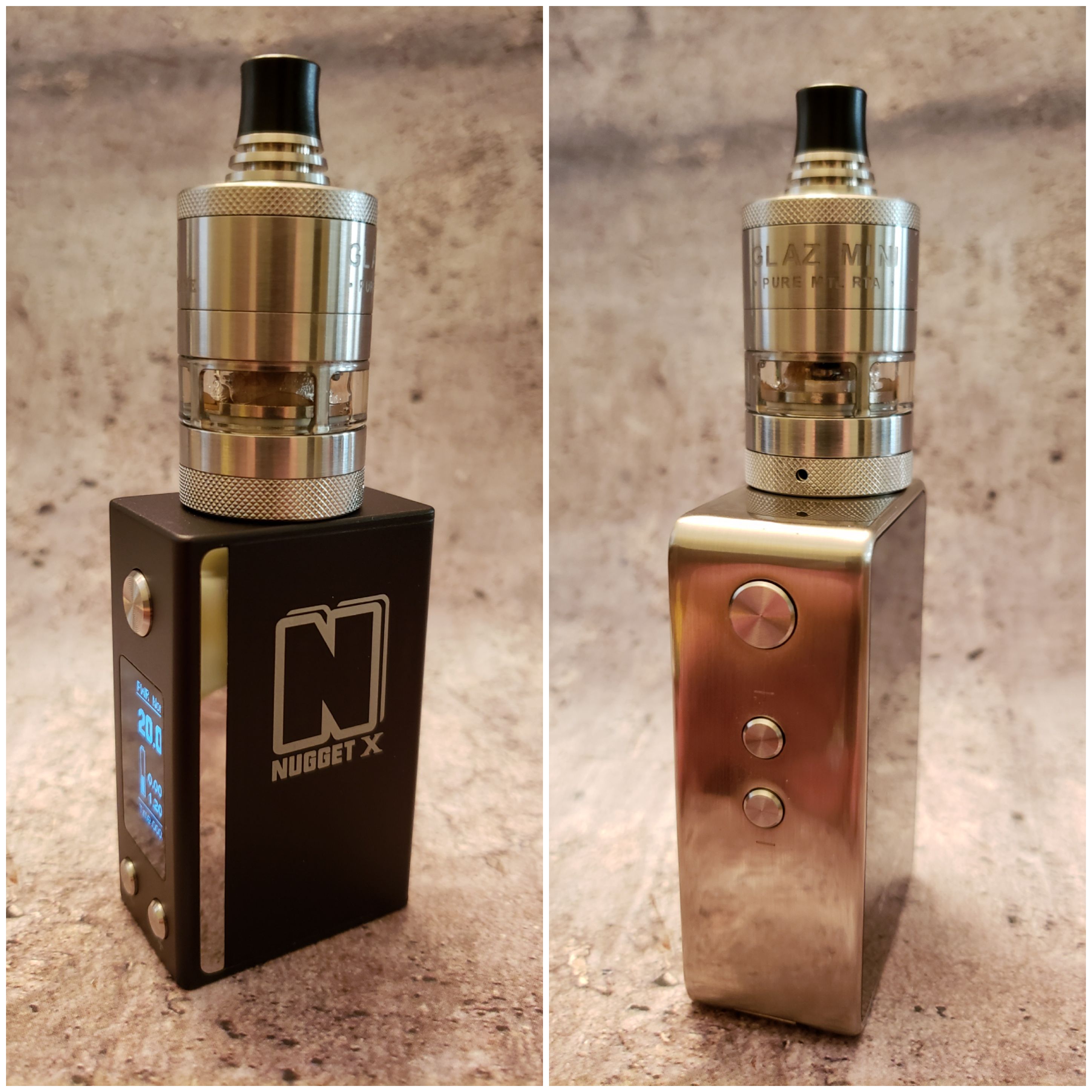 Wasn’t too bad on my medium-sized mods either 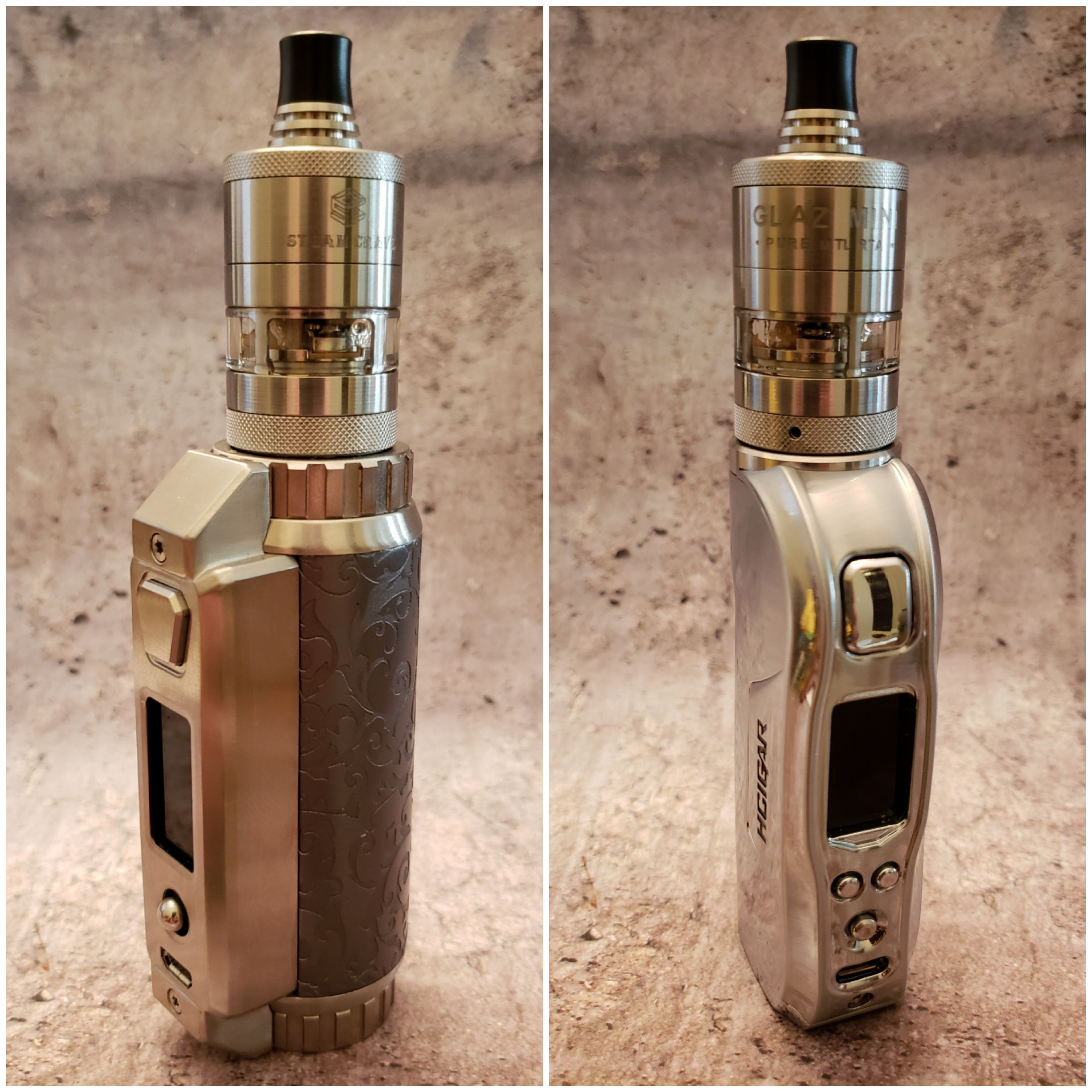 I started with MTL tanks, used a Kayfun for a good year religiously until sub-ohm tanks hit the market, I was hooked. I am coming back around though, don’t get me wrong, I will fight somebody who tries to take away my cloud/flavor chucking setups but I like a good MTL now and then. MTL tanks also come in handy when you don’t want to be a dick but still need that nic fix. With all that said it still needs to have good flavor and the Glaz Mini delivers…..albeit with a really tight draw. I was almost going to list as a con that I would have liked a little more airflow but then it would not be a “Pure MTL” RTA. Steam Crave definitely delivered on that promise, that vapor is going into your mouth first, not straight to your lungs.

Now if you’re a cloud chucking fiend like myself is MTL right for you…..No…..maybe? If you need to be discreet but still need that nic fix then this will be better than a pod IMO. I also only use MTL in the house, my DTL setups are for outside or in the garage, less chance of getting yelled at for fogging up the room. The only thing I use in the car when raining as well, it makes a lot of sense then.

I do intend to collect more MTL tanks for my personal use and the Glaz Mini will be in that rotation along with the Fumytech Rose and Innokin Zenith. Once I run out of coils for the Zenith it is likely going in the trash to be replaced with another MTL RTA.

You can find out more about the Steam Crave Glaz Mini MTL RTA directly at there site: https://shop.steamcrave.com/c/glaz-mini-rta-new_0375 Looks like they already sold out of the first batch but should be getting more soon.