Thank you for checking out my review of both the Graffiti and Metal editions of the FreeMax Twister 80W Starter Kit. Late to the party with the Graffiti Edition, got it a few months ago but half a tank in on a business trip and broke the glass on the tank, bye bye dual coil…..sigh. Freemax understood and said they would send the new Metal Edition with the new TX Mesh Coil Series（MESHED TEA FIBER COTTON） which is an upgrade to the older series. 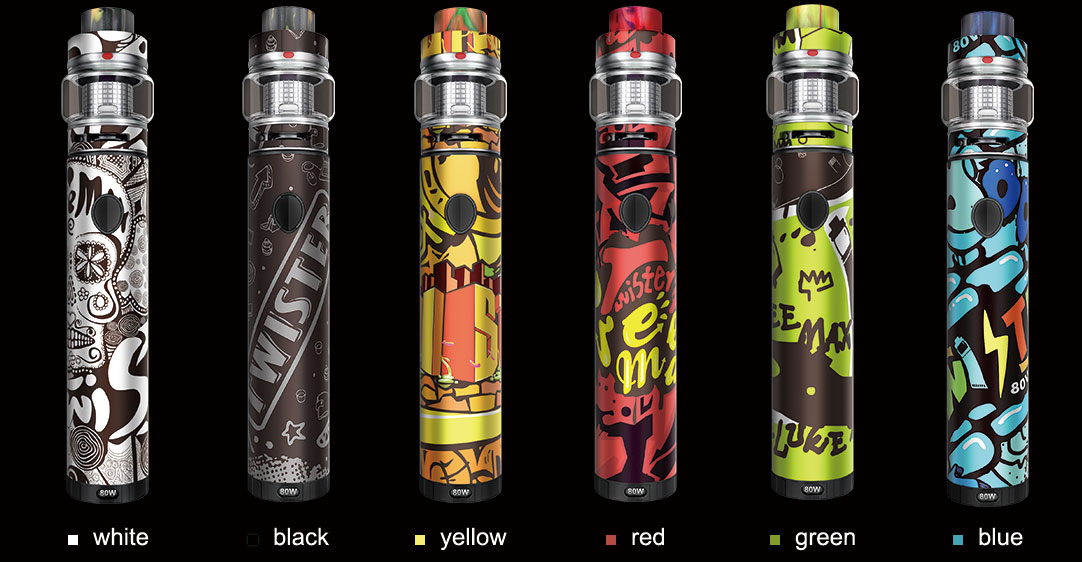 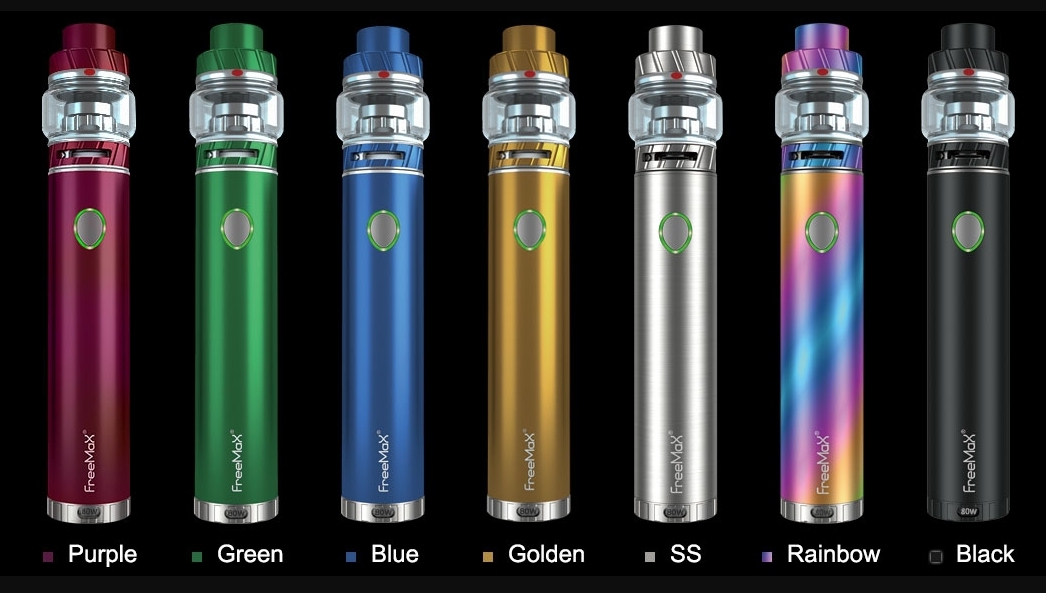 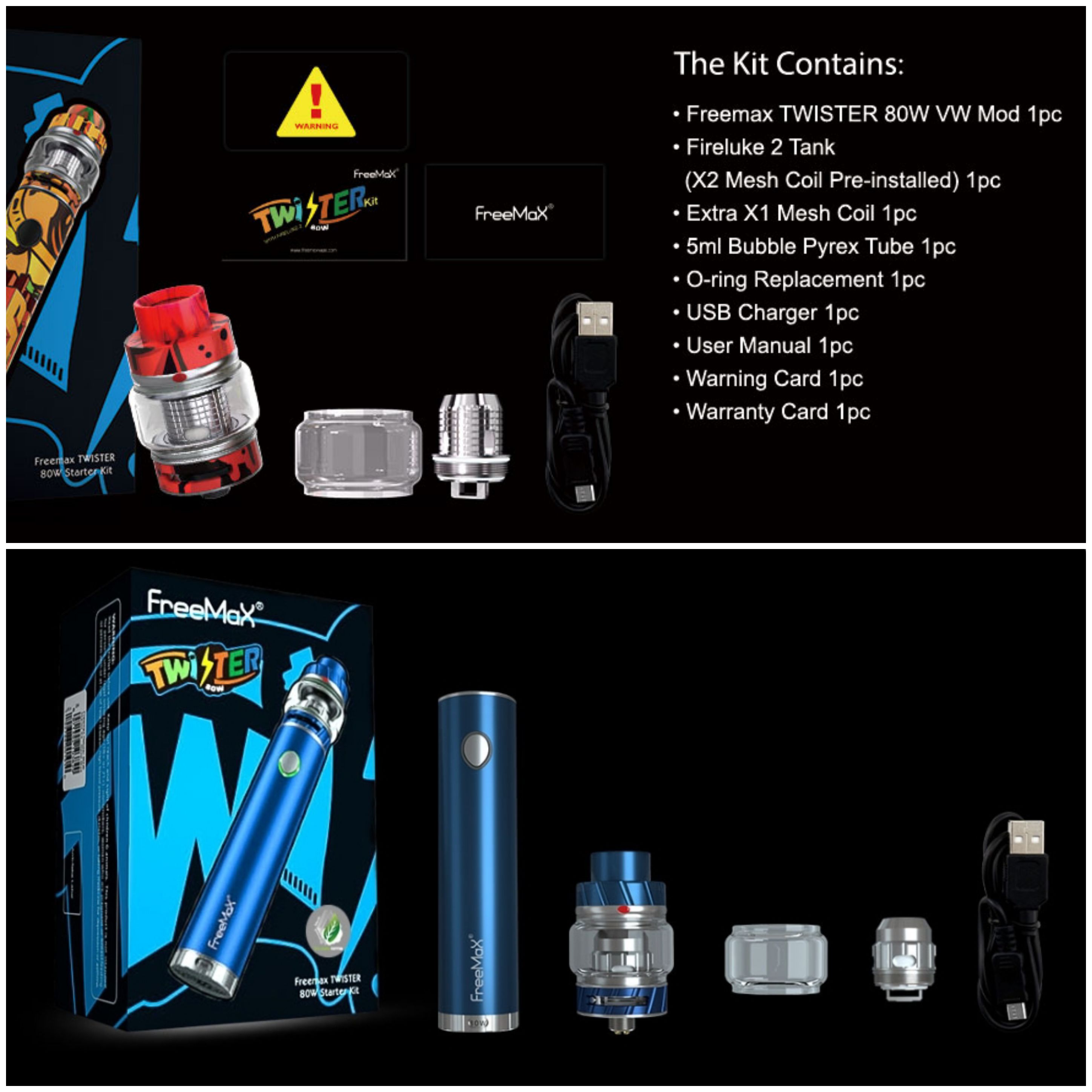 Both kits use the same mod, the only difference is cosmetics. Powered by the same internal 2300 mah 20600 battery, would have liked a little bit bigger using a 21700 battery, replaceable would have been even better. 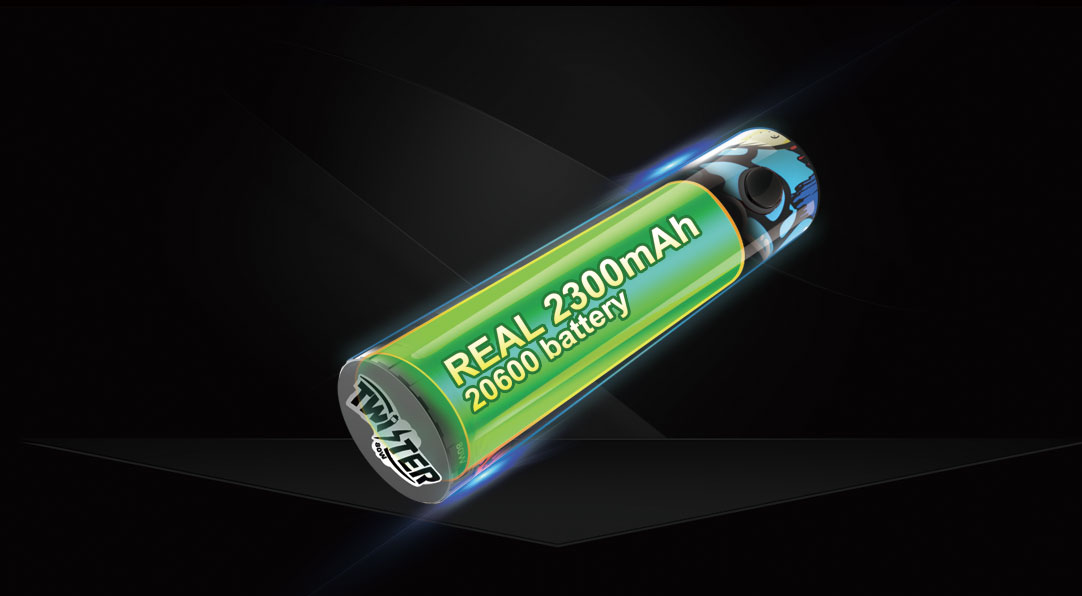 Performance wise, not a lot to complain about, hits quick and the power feels consistent until you get the red LED around the power button to tell you it needs a charge. Comparing the wattage on a full battery to a DNA mod it felt pretty close, not the equal but for a starter kit, I don’t think many will be disappointed.

Recharging using a 2 amp charger took some time, I began recharging when I felt the power drop and saw the LED around the power button go red. Set the timer for 2 hours and when that was up, still charging, added another 30 minutes and after that, still charging. Had to unplug it after that, had to leave and never charge unattended. I have to estimate it took around 3 hours to fully recharge, pretty slow. When I had it with me in the car I would just plug it in right away, passthrough charging means you can vape with the USB plugged in. Got in the habit of doing that as the first time I ran out of charge and had to wait a little till the battery got a charge before I could vape without it being underpowered.

510 is mounted from under and is a good connection with a spring loaded 510 pin that had good throw and nice resistance. 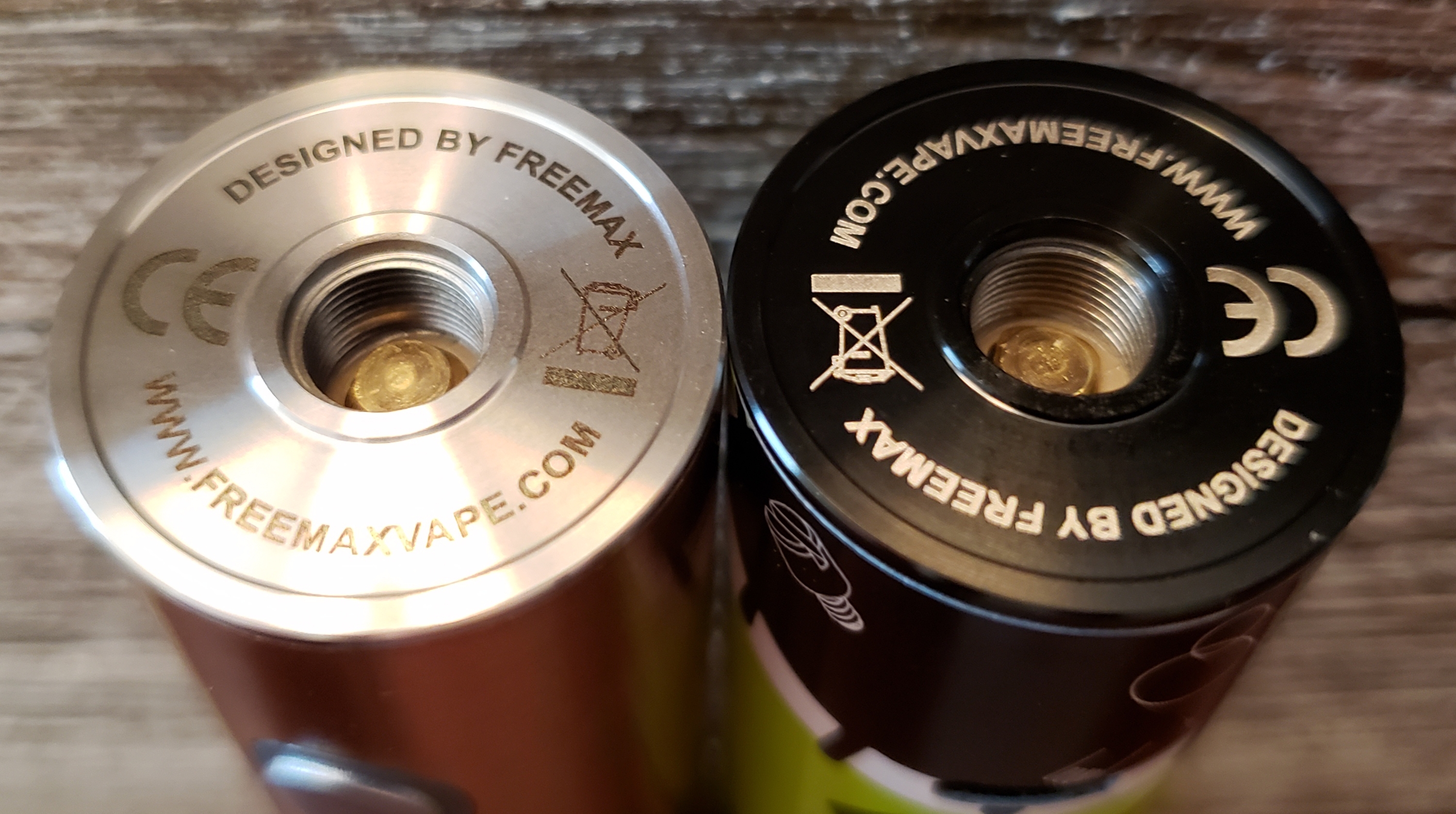 The Graffiti edition has a black background with white lettering for the power numbers, the Metal edition if stainless steel with a laser etched carbon black lettering. 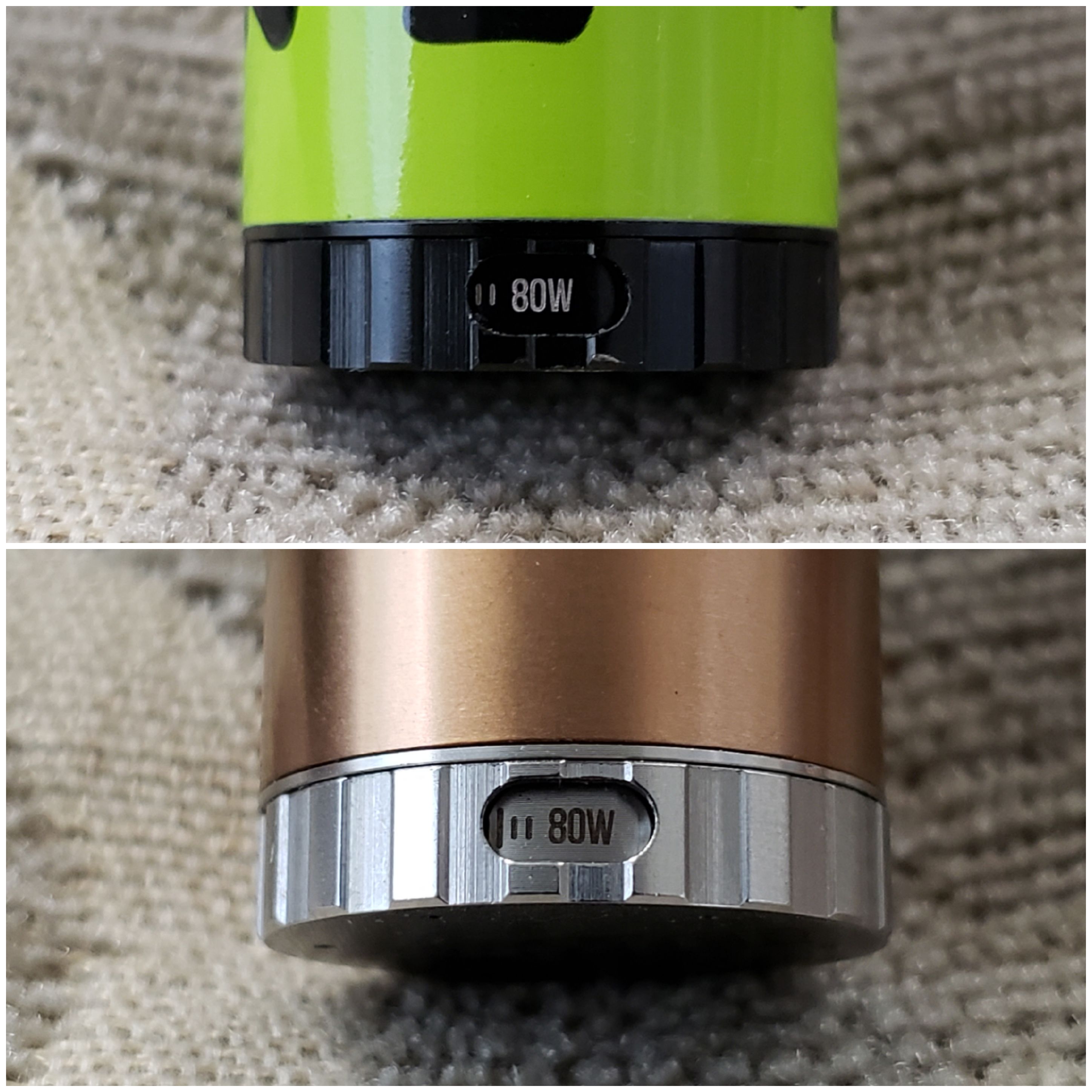 One thing I quickly realized is the Metal edition lettering is incredibly hard to see with bright lights, not the case with the Graffiti edition. 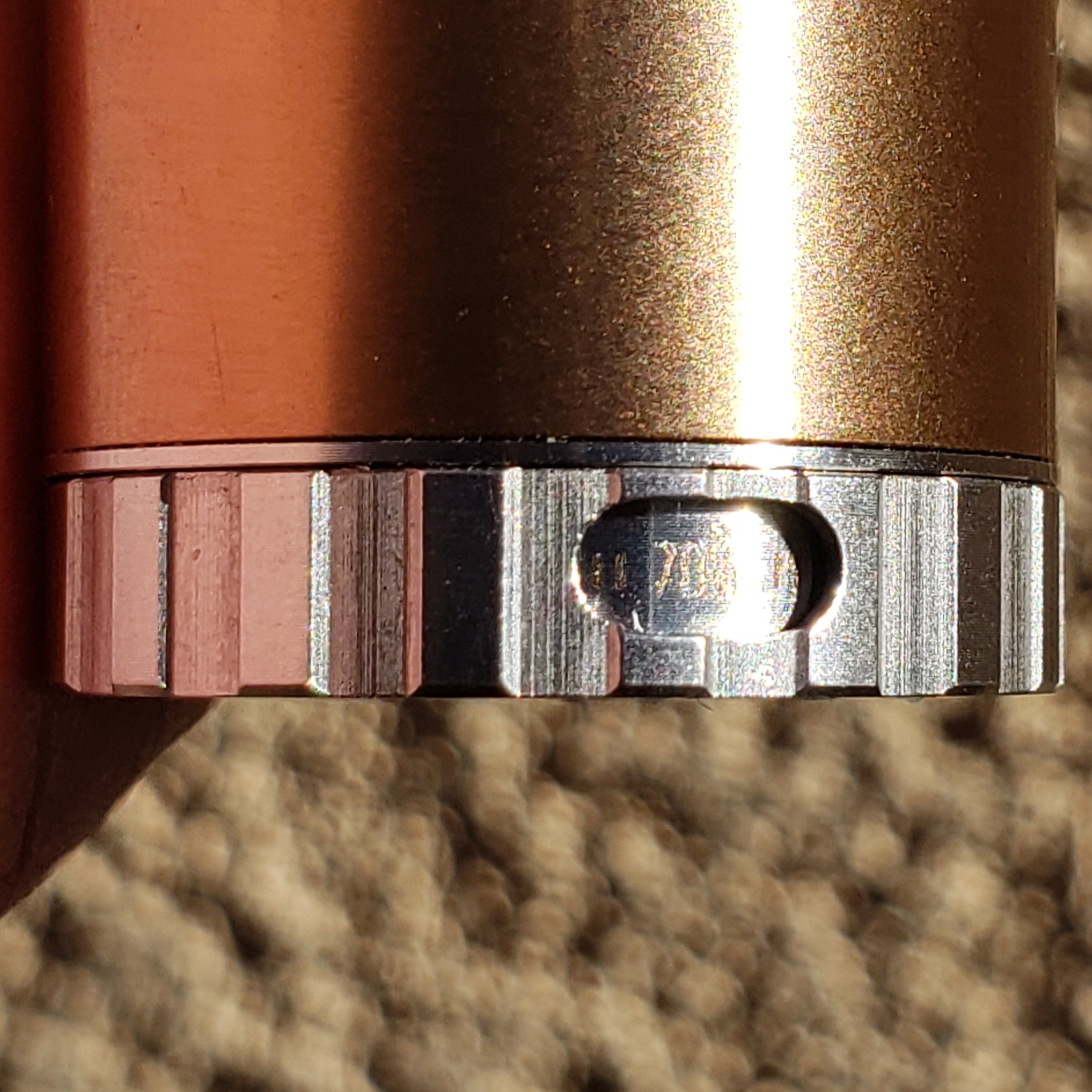 I had to shade it with my hand to see the numbers, if not it was near impossible. I really wish they used the black with white lettering, much easier to see.

My Graffiti edition Twister has a wobble to it when I set it down, have to be careful. Don’t have that same problem with the Metal edition.

Overall the Twister mod just works and I don’t think anyone will have much to complain about aside from the battery life and numbering on the Metal edition. Would love to see Freemax make a Twister Max edition with a built-in 4000 mah 21700, a version with a replaceable 21700 would be nice too but I am guessing for this market segment a built in would make more sense. Faster charging as well is a must have, took way too long to charge IMO.

The new version of the popular Fireluke Mesh tank that started the mesh coil craze. I didn’t know anyone who didn’t own and love the original Fireluke Mesh tank, I reviewed it and bought a second, that is how much I enjoyed it. Freemax then blew it and every other mesh tank away with the Fireluke Mesh Pro, the only sub-ohm tank I still buy coils for, love the Triple and Dual coils.

Needing a refresh for the original Fireluke Mesh Freemax concentrated on the coils, the coil makes the tank. They also changed the top cap. opting for a slide top instead of the screw off top from the original.

(Original on the left) 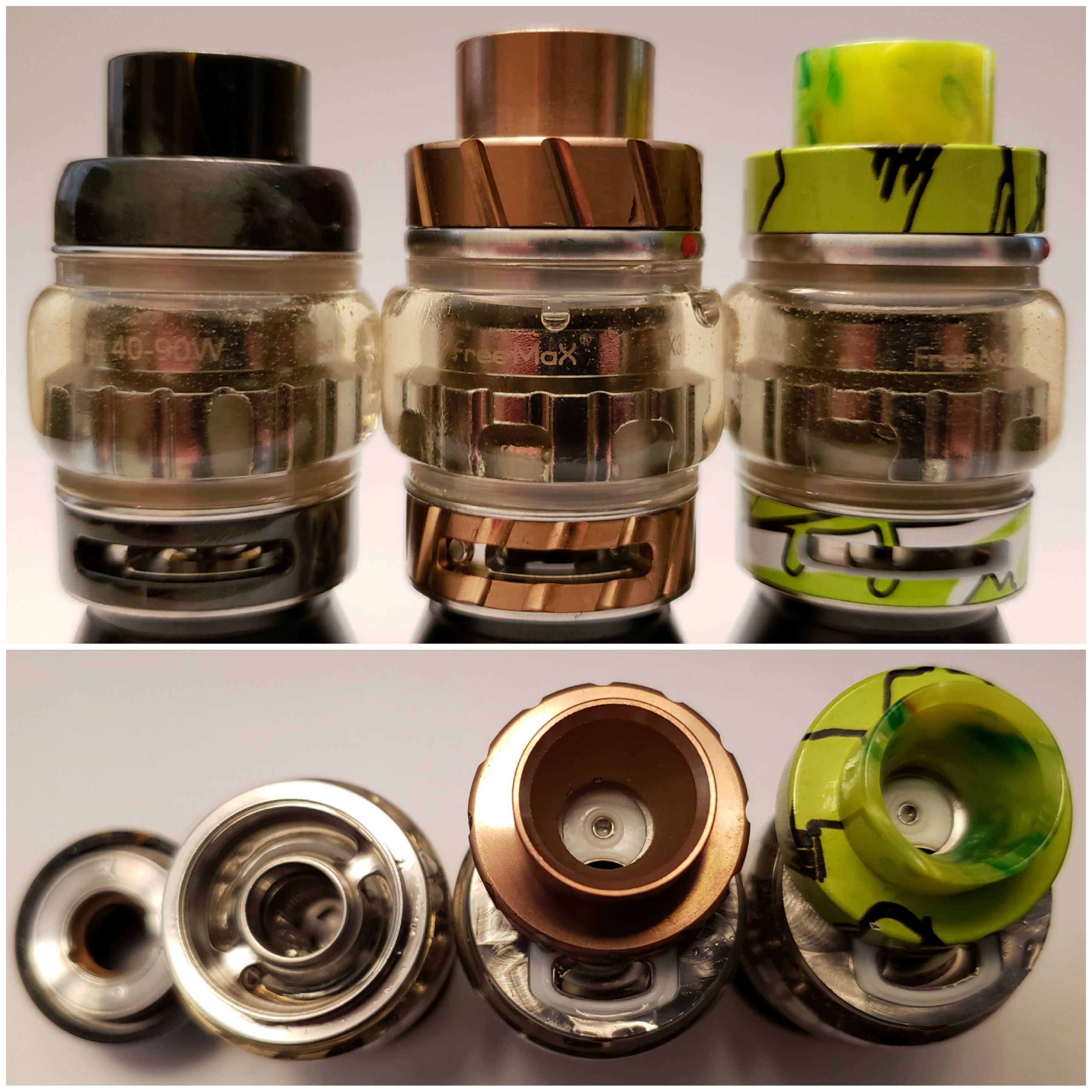 I am not a fan of slide tops, doesn’t save much time and look how big the juice port openings on the original is compared to the slide tops. You also have to be careful with slide tops opening in your pocket, who wants a pocket full of juice? That said the slide top on the Fireluke 2 has more resistance than the Mesh Pro, an overall better slide top design.

The Metal Edition comes with the New TX1 and TX2 coils, the Graffiti came with the older versions. Since I broke the glass on the Graffiti with the old X2 mesh I only got to use that coil for half a tank so can’t comment much on that. Freemax was kind enough to include the TX3 coils as well so I was able to test all 3 coils using the 3 tanks pictured above. 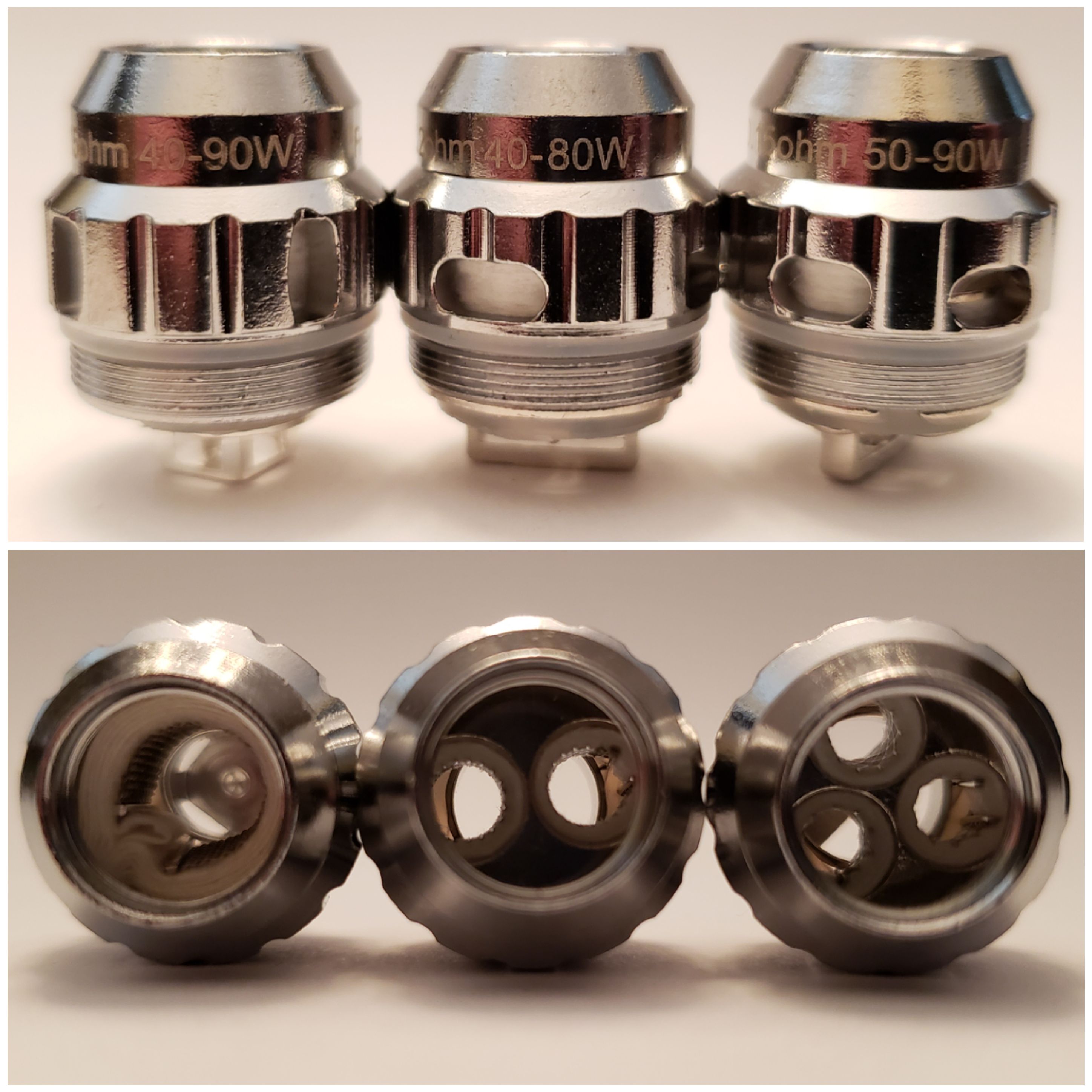 If you’re familiar with the older mesh coils you will see the new TX series coils are chunkier, this means they will displace more liquid so you lose some juice capacity. I measured 4.4 ml with the bubble glass but you can get 5ml with the X series.

Using 3 matching mods I started at the lowest wattage settings that the coils recommend to break the coils in. Using the same juice in all 3 the first thing I noticed was the TX1 didn’t match both the TX2 and TX3 for flavor, this did not change as the coils broke in and I increased power. After the 2nd tank I stopped using the TX1, not even close in performance and flavor, the other 2 were clearly superior. Between the TX2 and TX3 I preferred the TX3 the best at a slightly higher wattage but there close. The TX3 also handled it’s highest rated wattage as well, 90 watts. I was able to chain vape the TX3 at 90 watts without dry hits, the TX2 would get dry after 2 or 3 hits at 80 watts, had to drop down to 75 watts to avoid dry hits. The TX3 took more power to come alive, under 45 watts the vape was anemic and flavor suffered, the TX2 came alive at 40 watts. I found the sweet spot on the Twister mod to be 60 watts for the TX2 and 65 to 70 watts for the TX3, these ranges gave the best compromise between flavor and battery life.

Took apart all 3 coils to have a look at the mesh structure, thought you might find it useful as well. 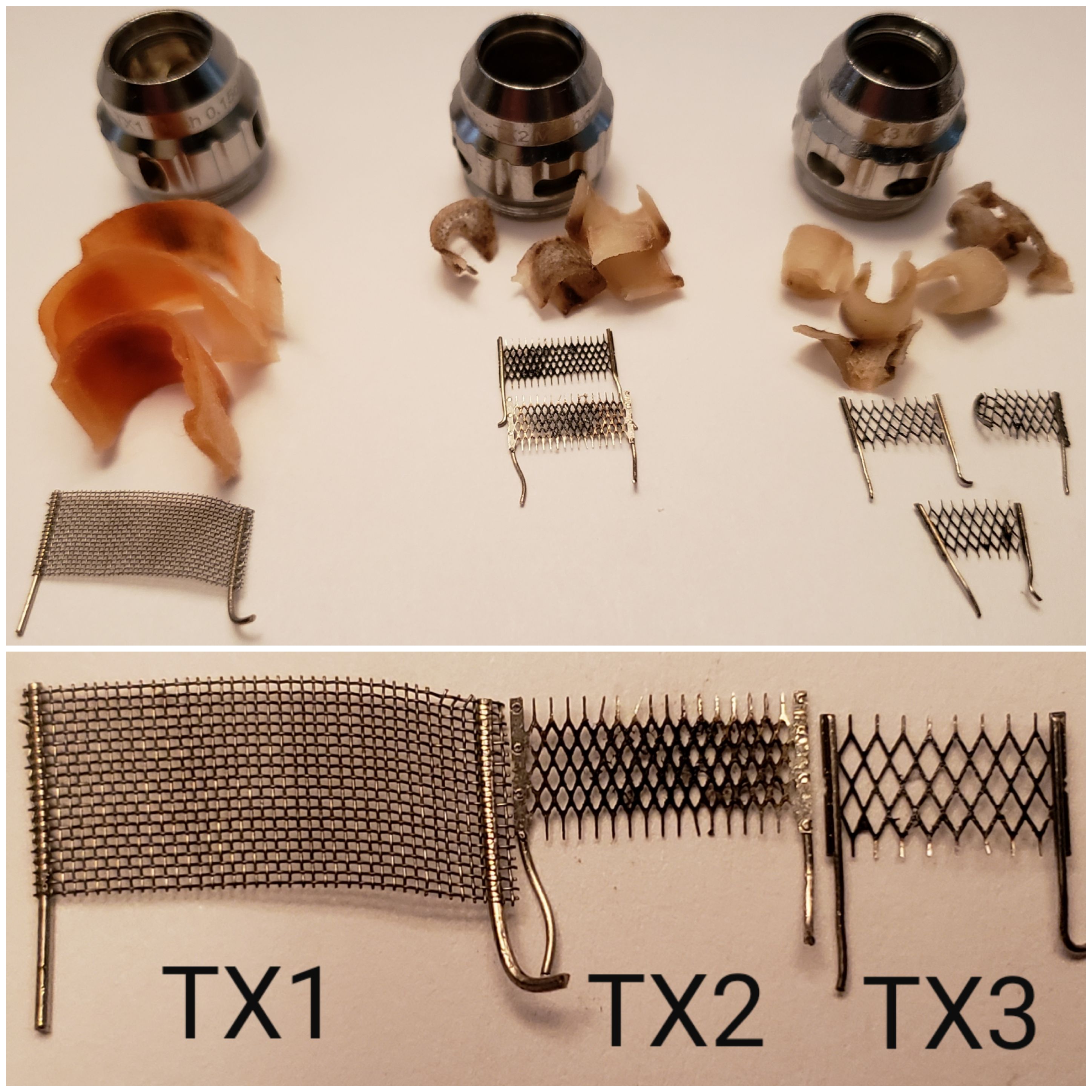 I preferred the TX3 when using the Fireluke 2 on a higher wattage mod other than the Twister, has the edge in flavor and performance. The TX2 is a better match for the Twister mod though, very good flavor at a reasonable wattage with better battery life.

For you Horizon Falcon tank lovers, I was included in that list as well. I recently installed the last of my single mesh coil in a pair of Falcons I have to test 2 recipes I have been working on. I am really shocked at how the performance of single mesh coils has just been smashed by the multi-coil mesh. Horizon does have multi-mesh coil options now but have yet to try them.

With the inclusion of the TX2 and TX3 coils, Freemax has significantly improved over the original. If you have an original Fireluke Mesh don’t worry, the new coils will work in it as well so no need to buy the new Fireluke 2.

When Freemax introduced the Fireluke Mesh Pro my original Fireluke Mesh stopped being used much. The original single mesh coils could not compete with the multi-coil Mesh Pro coils. The new TX 2 and TX3 coils have breathed new life and it looks like they will be adding more coils as well.

The Twister mod is a real decent starter mod, the main con being the battery life and how long it takes to charge. I wish this was available when I started vaping, what I had paled in comparison.

I would definitely recommend this kit to someone starting out, I have seen it online in the $30 range, that is a deal. I would only recommend the TX2 coils with the Twister mod though, the best mix of performance and battery life.

The star of the whole kit is the TX 2 and TX 3 coils, breathes new life in the original Fireluke Mesh tank. The Fireluke 2 is good but I still prefer the top cap on the original, just not a fan of slide top tanks. Get the new TX coils and reinvent your old Fireluke Mesh, might want to add a bubble glass to it as well if juice capacity is a concern. Just don’t get it if you think it is a Mesh Pro killer, it is not for me but it would be better for those that like to vape at lower watts.

I myself still have 3 more of the TX3 coils so will continue to use the Fireluke Mesh on my single 21700 mods, good match there as the Mesh Pro requires too much power to be used on a single 21700. If I find the TX coils at a good price I will pick up more too, I don’t use sub-ohm tanks often but sometimes don’t have time to build.