Wotofo has teamed up once again with Matt from the popular YouTube channel Suck My Mod. Wotofo was generous enough to send me the new collaborative design called the Serpent Elevate RTA for review. Let’s dive down and see if it deserves your hard earned vape dollars.

What’s in the package: 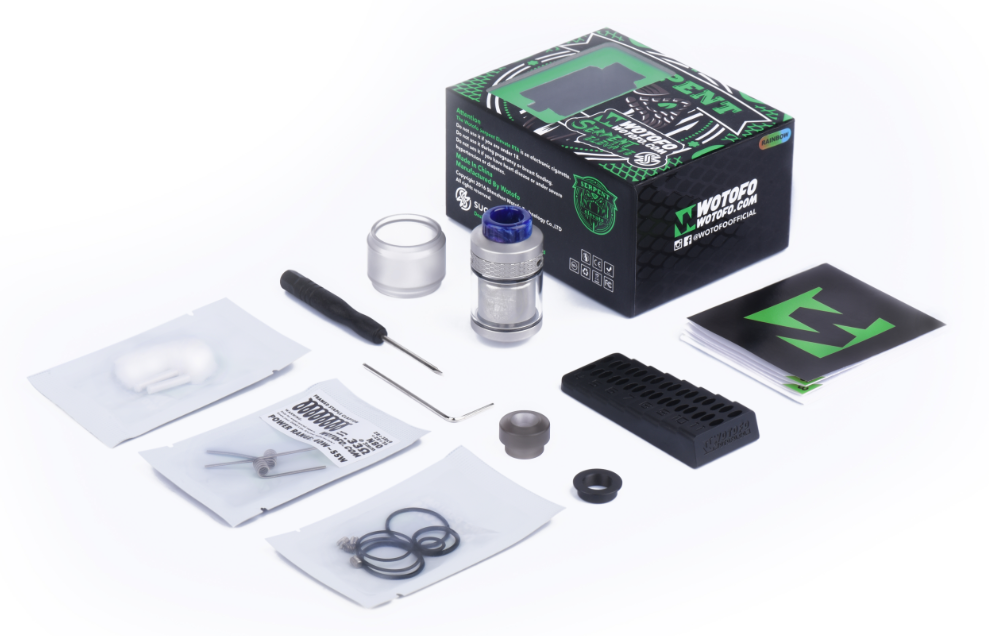 Getting to know the Serpent Elevate

The Serpent RTA has been around for a while now in various configurations but to my knowledge, it has always been a single coil RTA. You have had the original, the mini, the SMM version and maybe 1 or 2 others, I have owned a couple versions. The new Serpent Elevate differs as it is now a top airflow, the other versions being bottom airflow.

Being top airflow only on the intake as it is then diverted to the side and bottom of the coil in an interesting design. 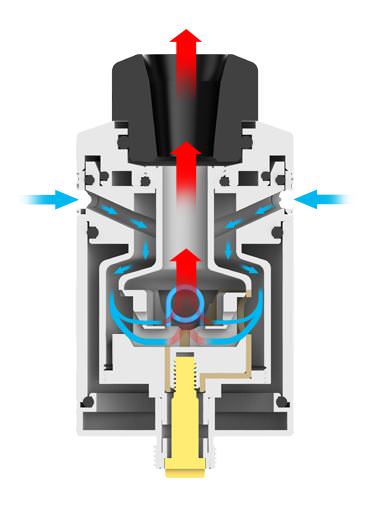 The airflow hitting the coils from the bottom will generally yield the best flavor, the sides being second best. Does it work? For the most part, yes but I will get more into that in the build section.

The build deck is definitely interesting and they provide 4 postless slots, not for building dual coils but to accommodate coils wrapped in either direction, smart on their part. 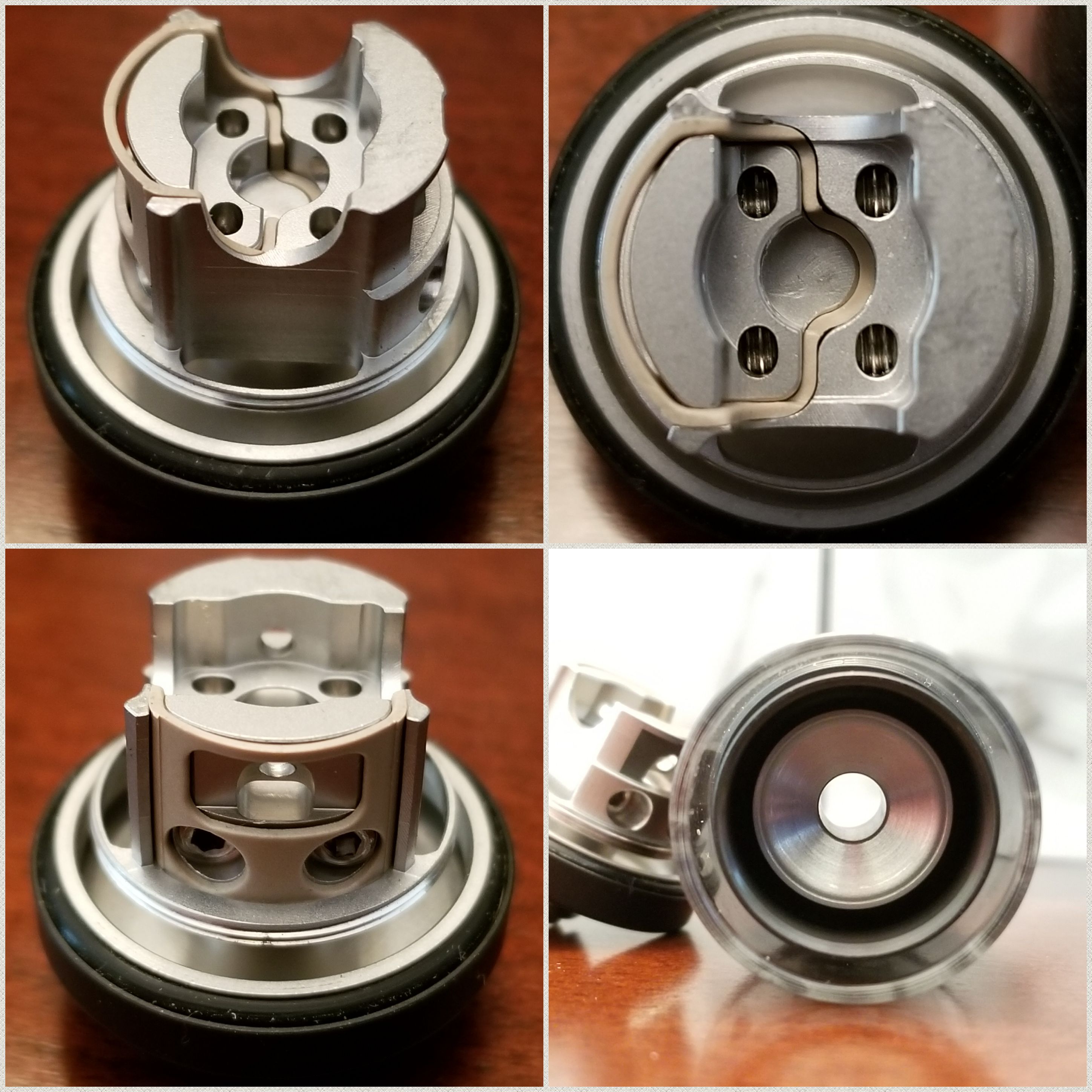 The posts also tighten from the sides so your wide builds don’t get twisted, all in all, it is easy to build on. You do have to cut your coils in advance being a postless deck but Wotofo has that covered as well. My review sample included the post that has a bend in it to show where to cut the leads. 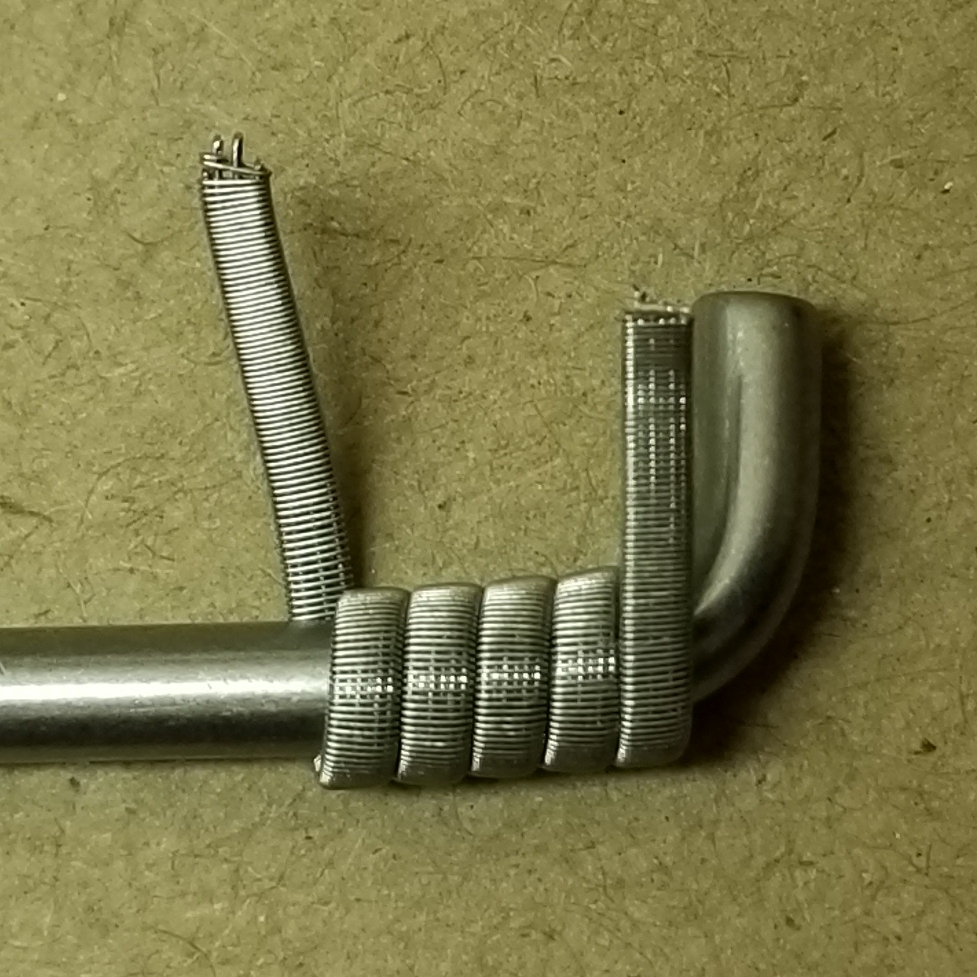 Judging by the pics on Wotofo’s site they have changed that to include a coil cutting jig which I think is a better choice. The post I showed above looks the same as the others I have received from Wotofo but there are no markings on them. That would be OK if they all had the same depth to cut but they’re not so it is easy to get them confused. I have since given up on using that post and use a coil cutting jig I already have so am glad they decided to go that route with the consumer version.

My reviewer sample also came with a plastic or polycarbonate bubble to increase capacity from 3.5ml with the straight glass or 4.5ml with the bubble PC. At first, I was told this would change to a Bubble Glass instead of PC but then got another email saying it was back to the PC bubble tube, I have no idea what you will get but this is what the PC bubble tube looks like installed.

Shown here on the Lost Vape Therion DNA75C on the left, Voopoo VMATE on the right 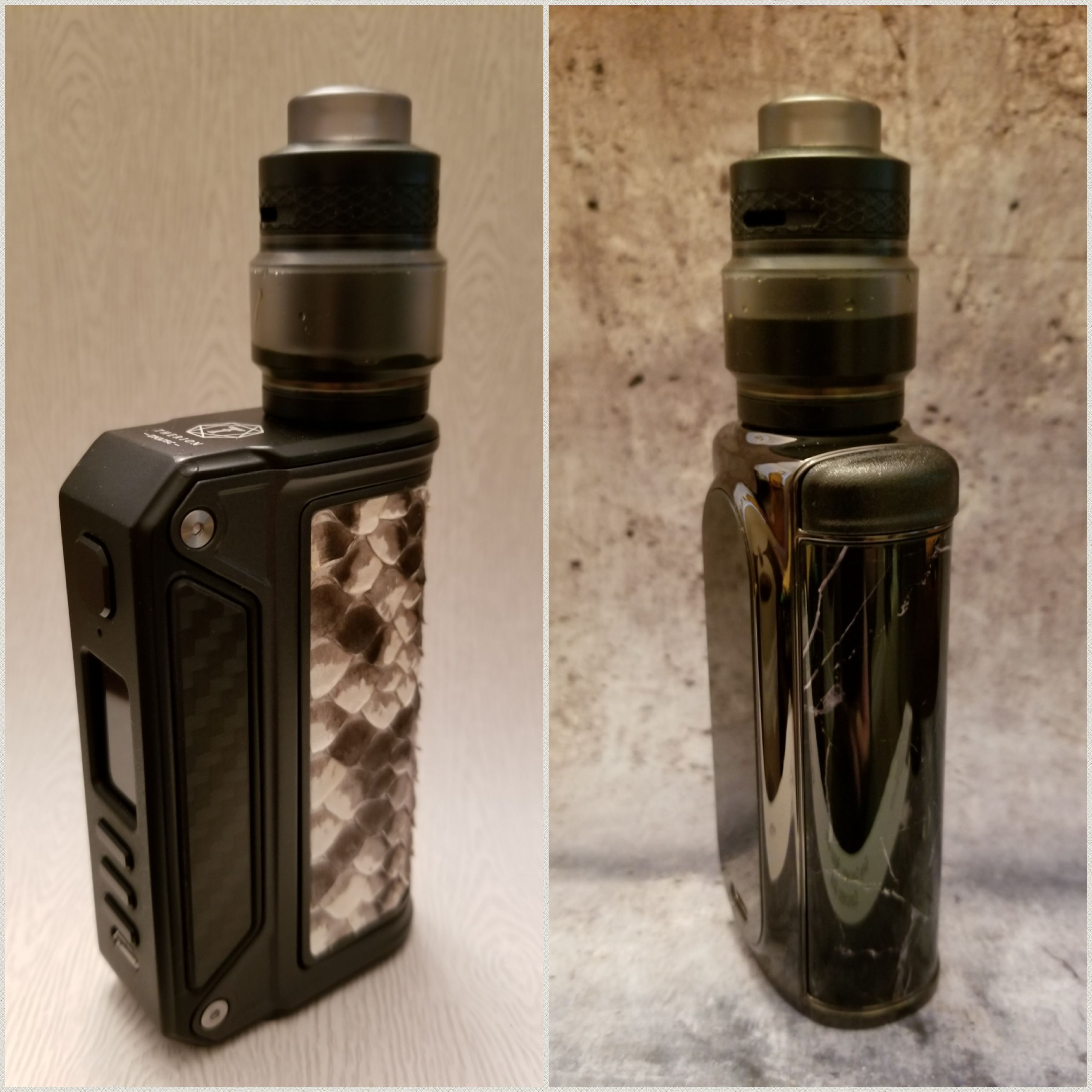 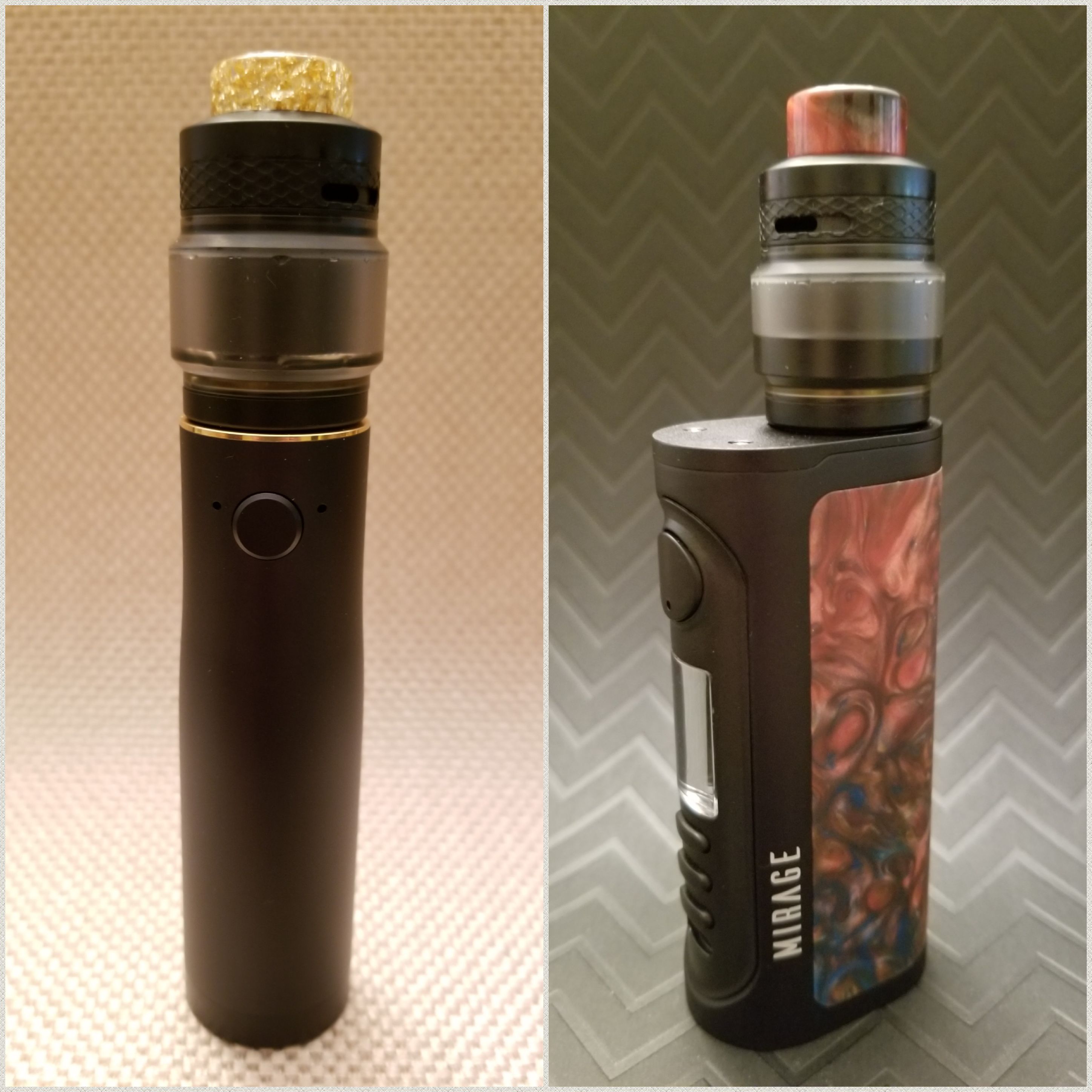 They include everything besides ejuice and a mod to get you started which is a nice touch. Not only do you get some decent coils but cotton as well. 2 nice looking 810 drip tips and a 510 drip tip adapter are also included, nice kit indeed.

I tried multiple builds with various wires and height on the coils, my favorite being a 3.5mm inner diameter fused clapton with dual 26g core and 36g Ni80 wrap shown below. 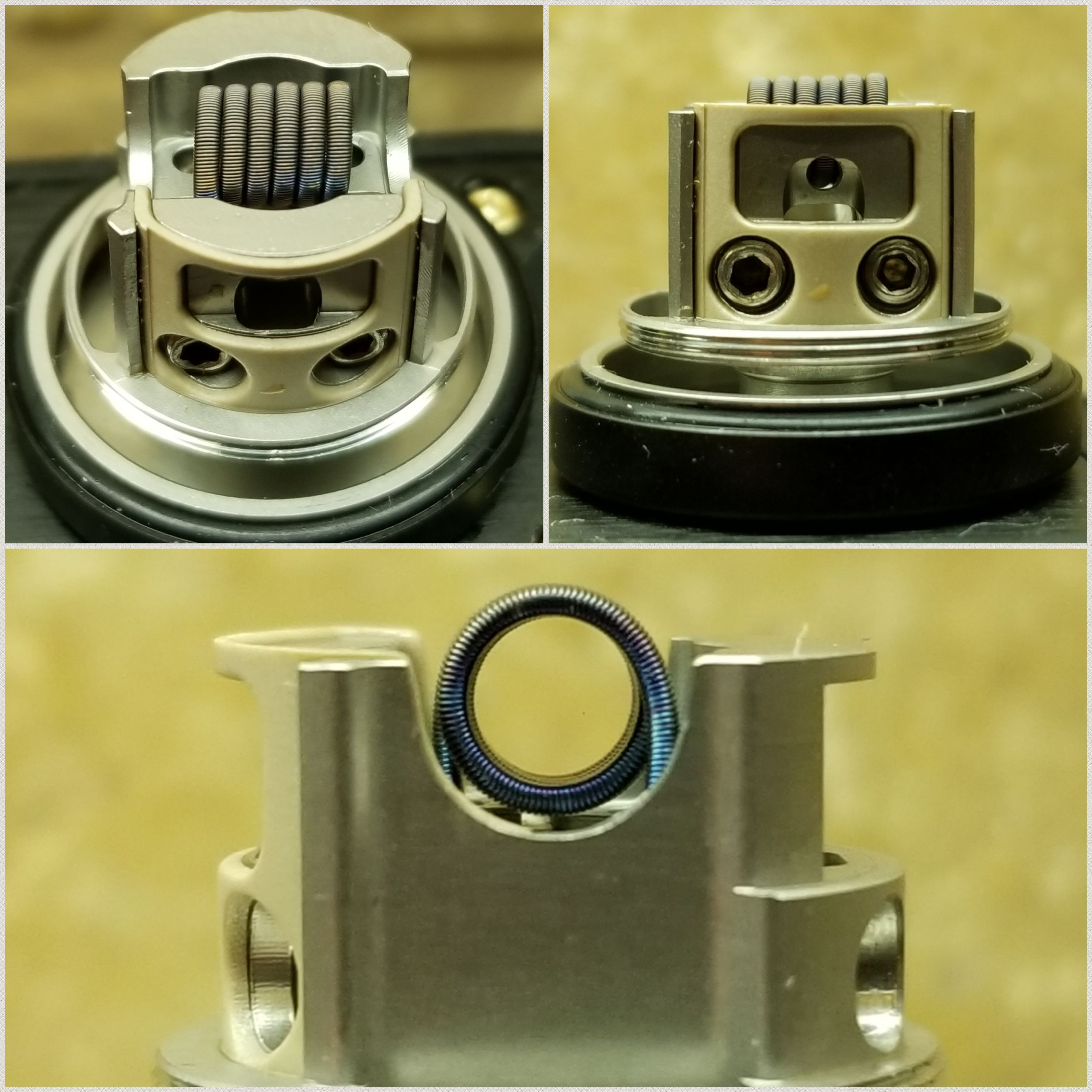 I also had to try a single wire build, in this case, 26g SS316L but I was not impressed. 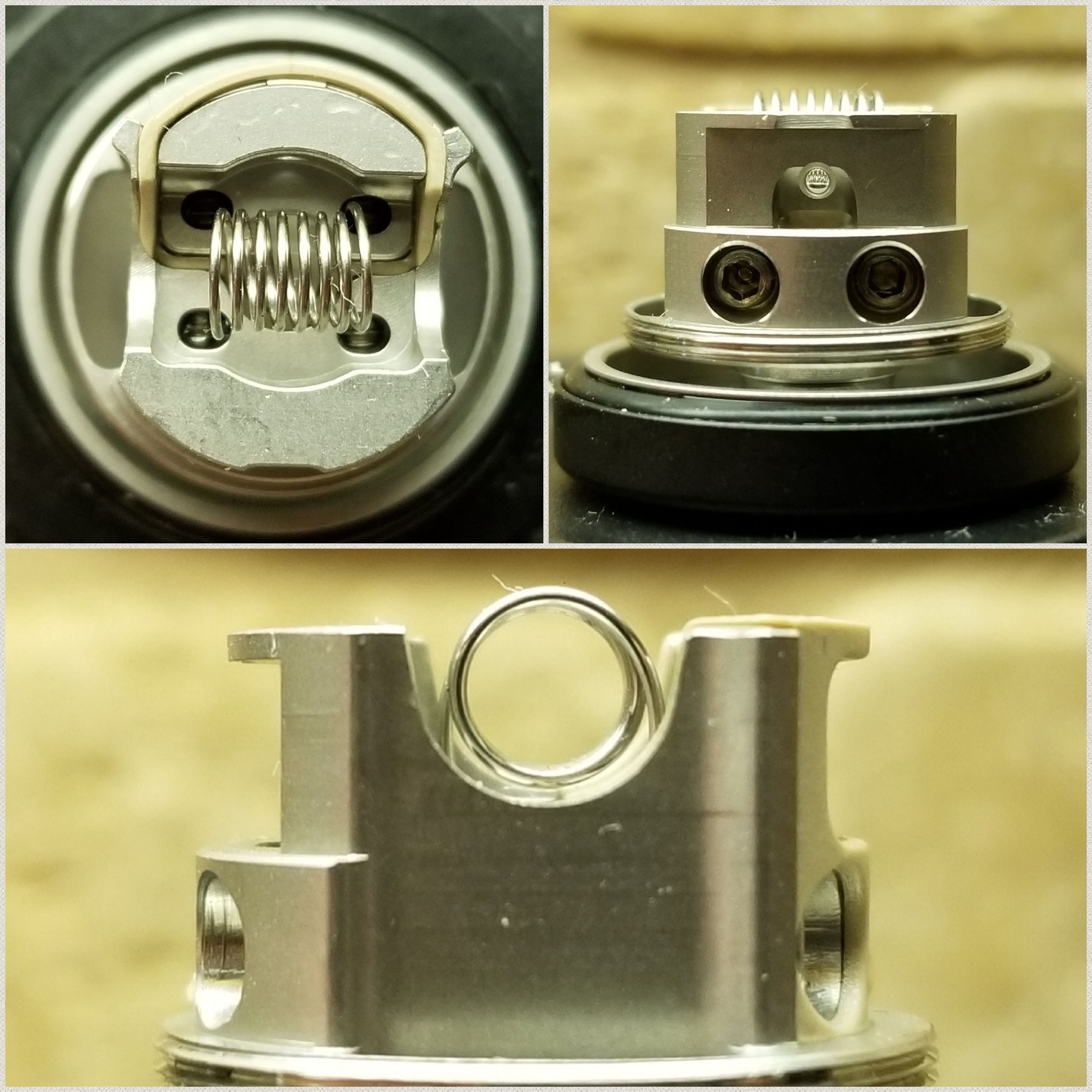 I also tried a quad-core fused clapton 3mm internal diameter but this time I raised the coil a little more. 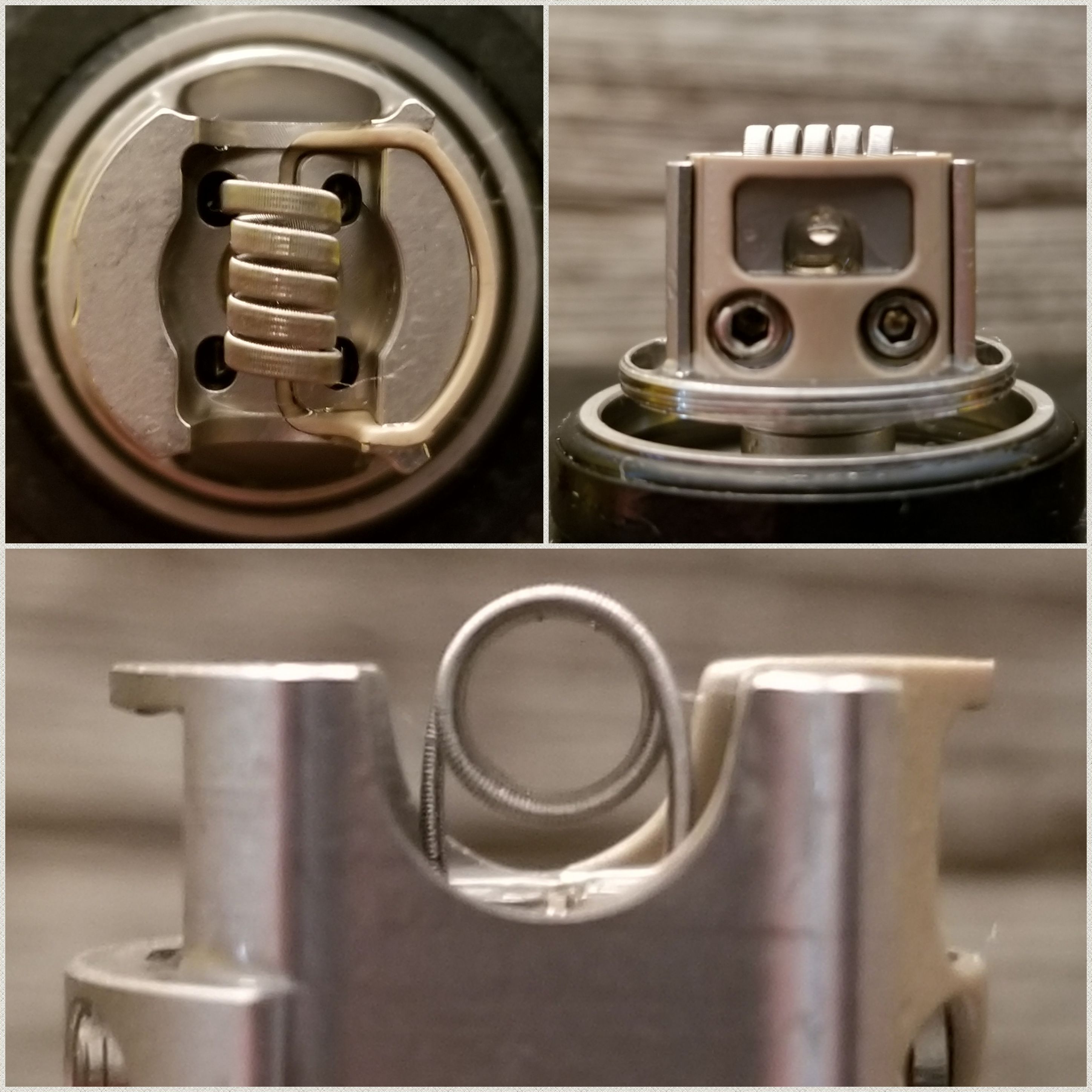 That last build was good but a lot better when I used the same wire but with a 3.5mm post and the coil low like on the first build I posted.

Normally I include wicking in the build section but this needs it’s own section as it is a pain in the ass. Not so bad once you get it right but it is really finicky. One of the main reasons I believe makes it tricky is your wick tails are longer than normal. 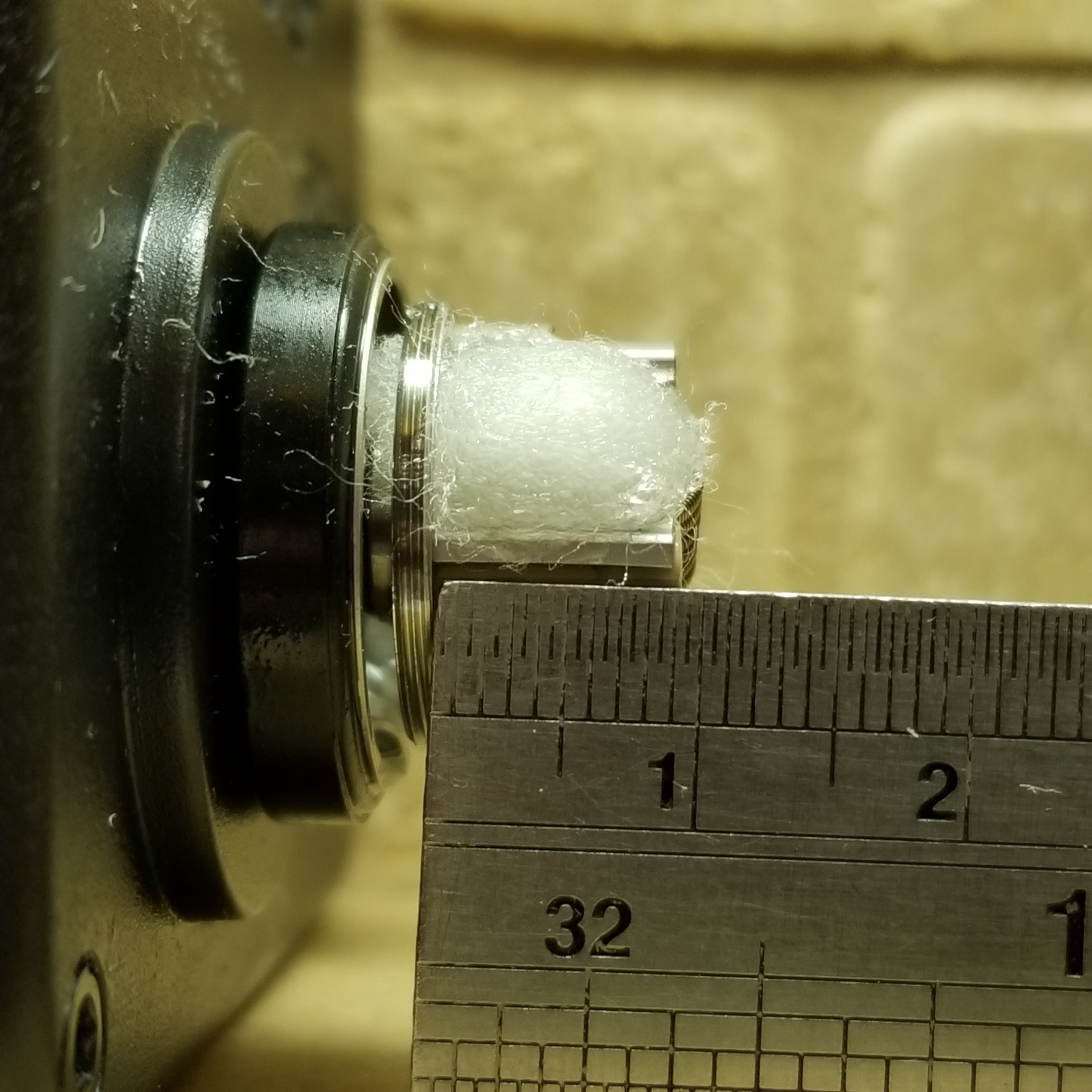 Look how far the juice has to travel, if your a chain vaper like me there is a definite possibility to get a dry hit on your 3 or 4th draw if not wicked correctly.

You also have to have enough wick as to not flood the chamber, if not it is a spity bastard and you will be drinking a lot of juice.

What I found worked the best for me is to use 3.5mm inner diameter coils so you will have enough cotton to cover the wicking slots. You do have to thin out your wicks though, you want it to cover the wick slots but not be tight in there. It is tricky to find the right balance at first but once you get it then it becomes easier but it is not very forgiving.

The length of the wicks is vital as well, not too short as you want to see a little bit of your wicks showing but do not let them touch the deck, that is too much. I found that placing your scissors at the base of the bottom will give you the correct length. 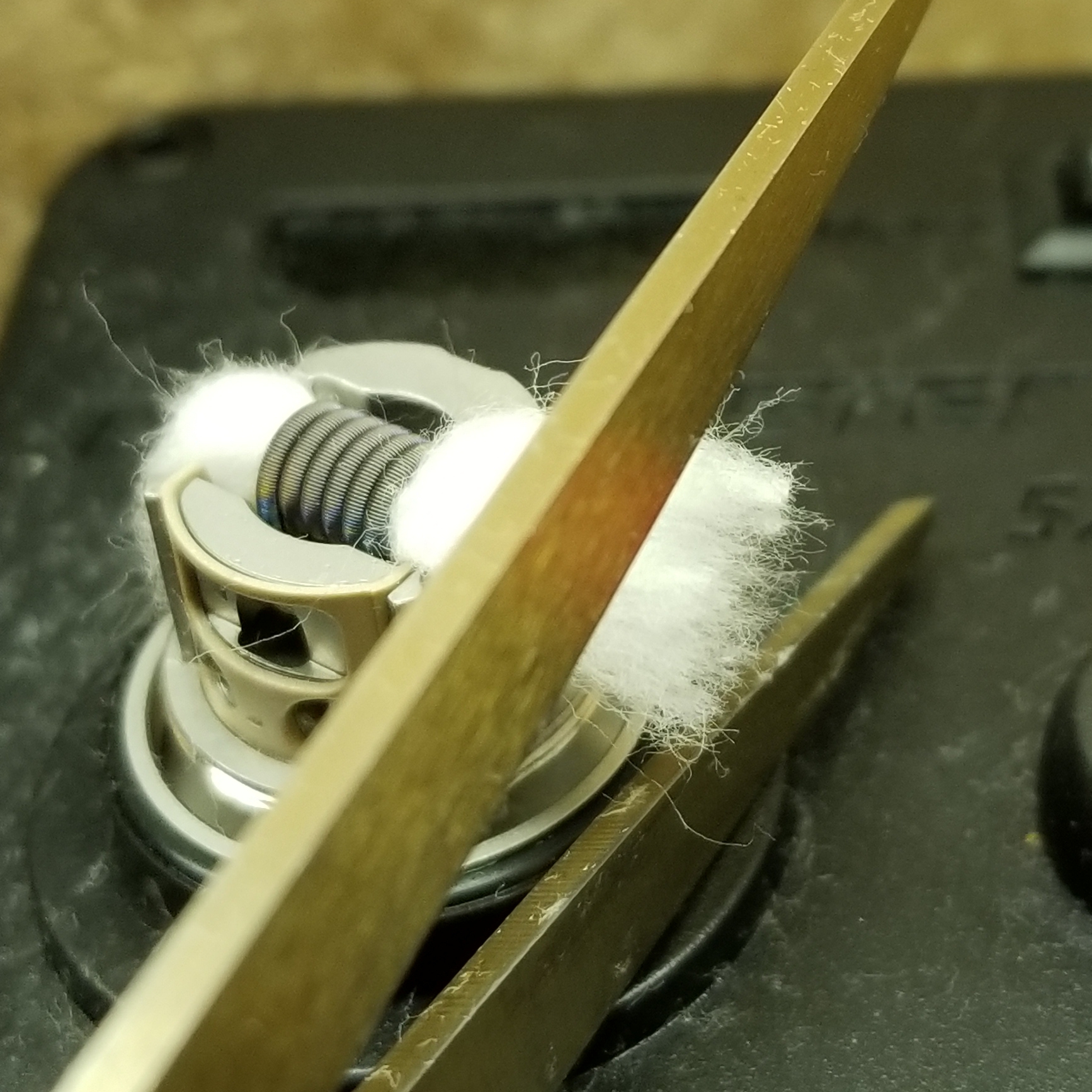 Here you can see the wicks just poking through but not touching the bottom. 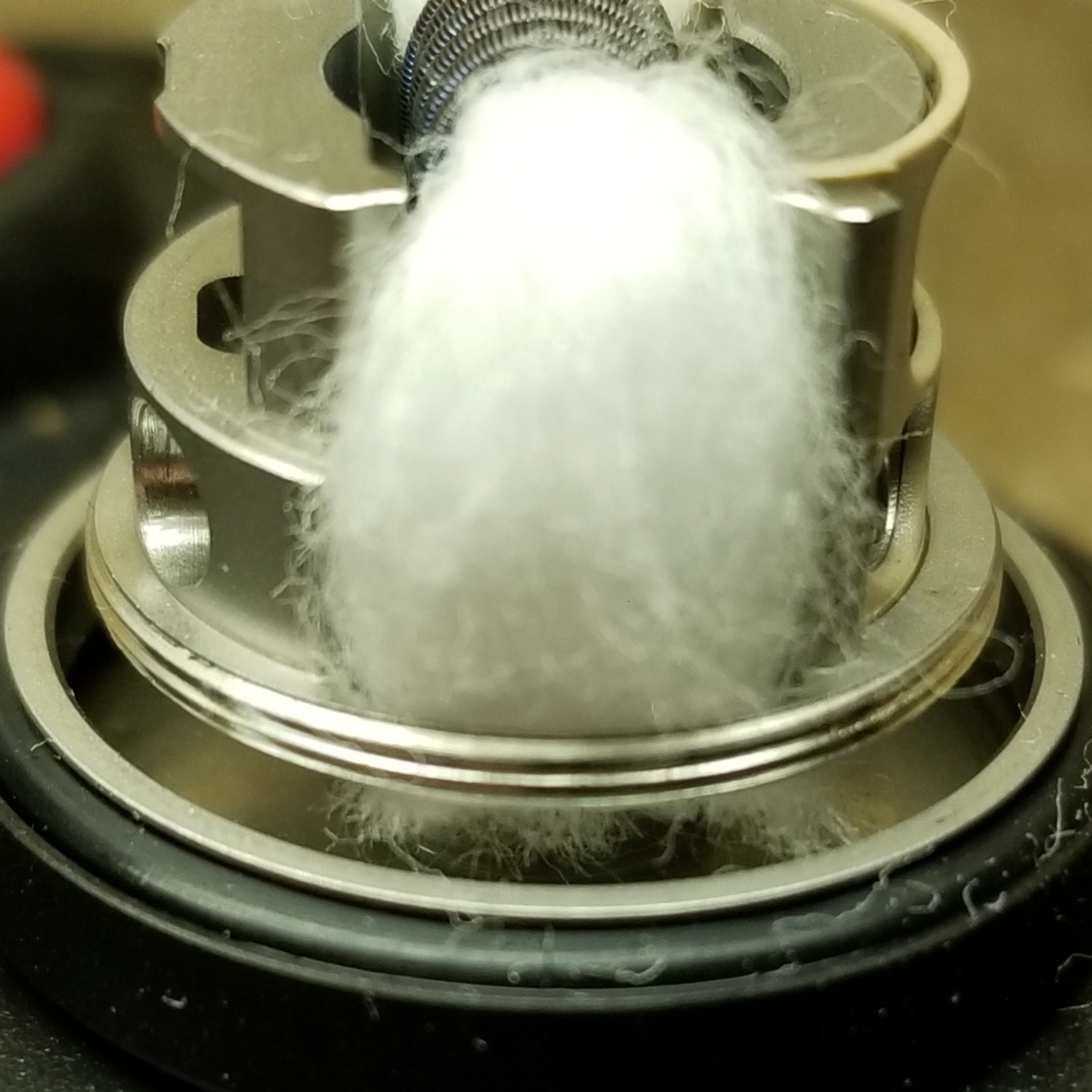 The wick does look thick in that pic but it is thinned out and you can easily poke a tweezer through the cotton at the wicking slots.

I am pretty good at wicking but my first attempt was too spity and my second was too dry, this was with using 3mm coils. I tried the damming technique at first which always works great for me but a little too short on the wicks. Then had the wicks touching the bottom of the deck….nope, dry hit city. Finally got it on my third attempt using 3mm coils but since switching to 3.5mm coils wicking is a lot easier each time.

I never like long wicks in an RTA, it makes for a trickier wick job and this tank is no exception. If your vaping at 25 or 30 watts it might not be a big deal, at those wattages the juice won’t burn as fast so it gives it time to wick properly. If you’re like me and you like to vape in the 45 to 60 watt range with single coils then long wicks need to be dead on perfect or dry hits will just be an issue.

With 3.5mm fused claptons and the wicking dead on the flavor and vapor production is pretty damn good. Flavor was a notch down from my favorite single coil tanks like the Asmodus Zesthia and Vandy Vape Kylin Mini but it wasn’t far off. Compared to other top airflow tanks like the Augvape Intake and Geekvape Zeus it held it’s own and in some ways was better, I compared the 3 with the same build. 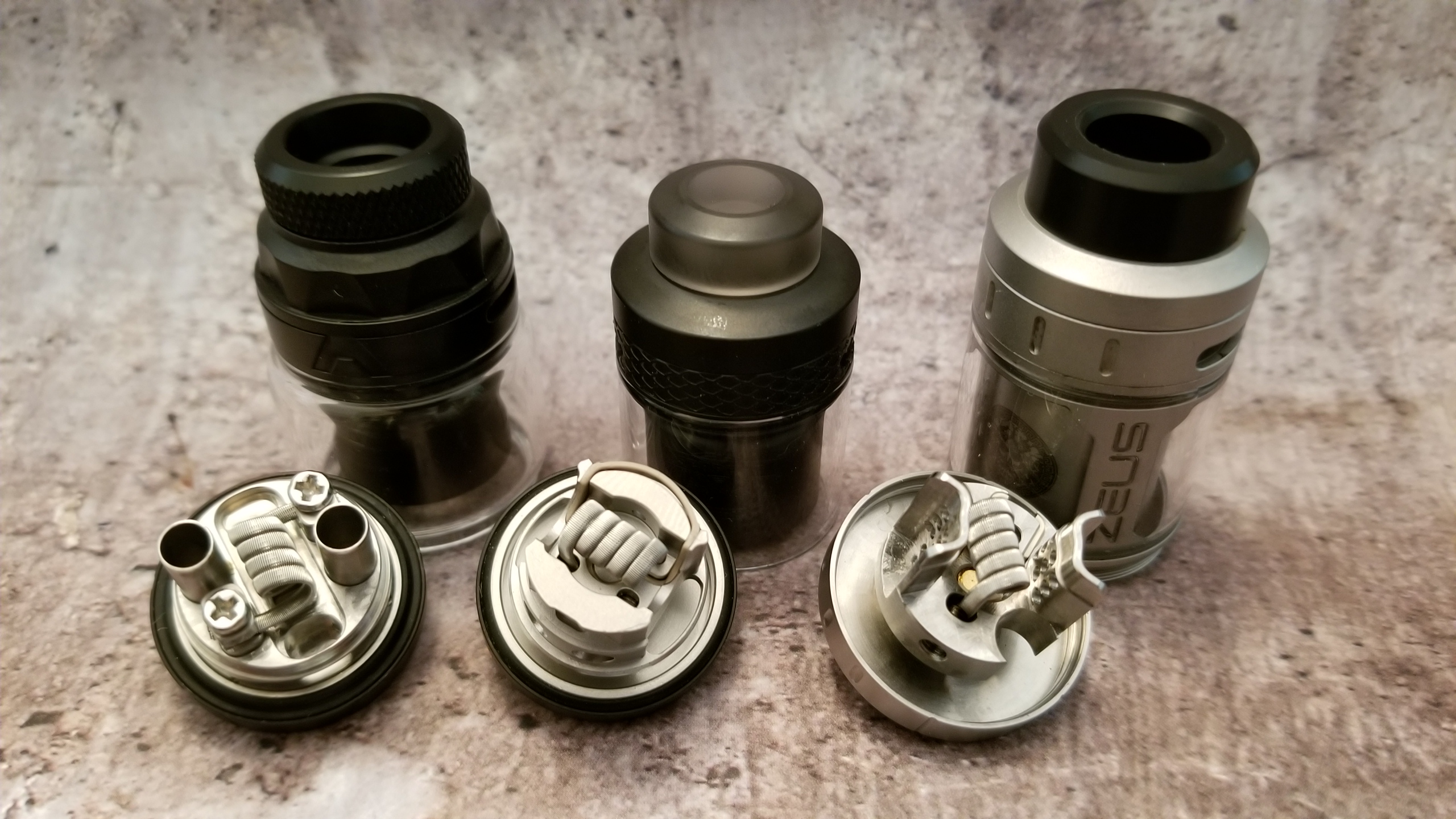 Both the Intake and Zeus are much easier to wick but the Serpent Elevate has more airflow than the Intake, a little less than the Zeus.

The Serpent Elevate is a pain to fill with the straight glass, easier with the bubble glass. The main problem is the small fill holes, if you’re in a hurry this won’t make you happy. 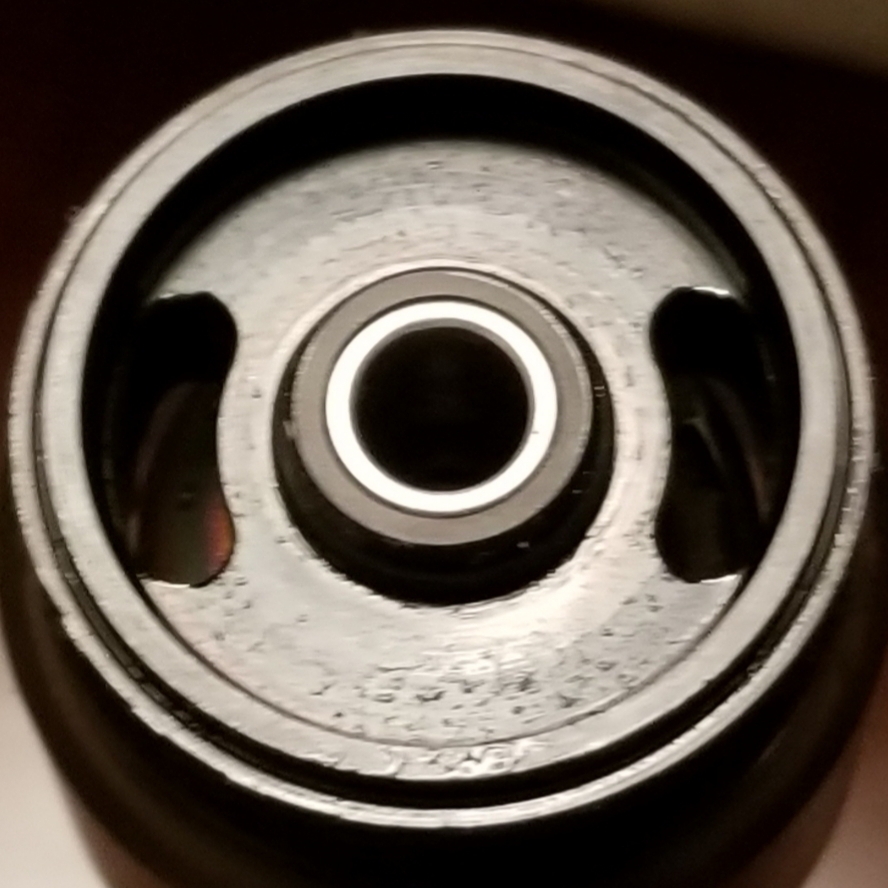 When filling the juice comes up on you quick and you think cool, I am full but nope. OK, I will try the other fill hole and the same thing, you are forced to go slow to fill it up completely. I constantly found myself getting frustrated as I am impatient, get in there you damn juice, that’s your home, don’t you like your home?

It has been a long time since I had a tank that pissed me off when I went to fill it but this one did it. Even when comparing the 3 tanks above the other 2 filled up quick, had to stop a few times to let the Serpent catch up so I could fill it to the top. I think that would have been alleviated had they just made the fill holes bigger.

Once you get the wicking down the Wotofo Serpent Elevate RTA is a very good tank except if you’re in a hurry and need to fill it up. I do enjoy using it but when it comes time to re-wick I am not a happy camper even though I have it down now.

This is not a tank I would recommend to beginners, a lot of other tanks out there that would be much easier to learn on. If there ever was to be a Serpent Elevate II just reducing the wick length would help out significantly, it is about 8mm that the juice has to travel up the wicks to your coil.

I do find it rather generic looking as well, a tank that no one asked me about as it doesn’t scream sexy. Maybe the other colors do it more justice but my black just looks like every other tank, doesn’t do it for me.

What I did like is the airflow, love how it comes from the side and bottom when hitting the coil. This results in good flavor and vapor production when wicked properly. I have it performing great right now, it is hitting like a champ but getting it to perform it’s best is not easy at first.

I want to thank Wotofo for sending the Serpent Elevate RTA and while not a glowing review it was at least honest. I hope they continue to develop this deck though and just fix the flaws, it would be a definite winner then. Put a little more sexiness into the design as well, do all that and I will buy the version II but as is it is a hard tank to recommend unless you are a pro at wicking.

You can find out more and purchase right here: https://www.wotofo.com/collections/rta/products/wotofo-serpent-elevate-rta#