Thank you for taking the time to view my review of the Desire Design X Mini 21700 Mod which was sent to me directly from Desire Design for the purpose of this review.

Getting to know the X Mini

I was fortunate enough to get 2 colors, the black and white. The first thing that impressed me was the finish, it has a pearl like reflection to it, reminds me of the Cadillac Pearl White that has a beautiful sheen when the light hits it just right. 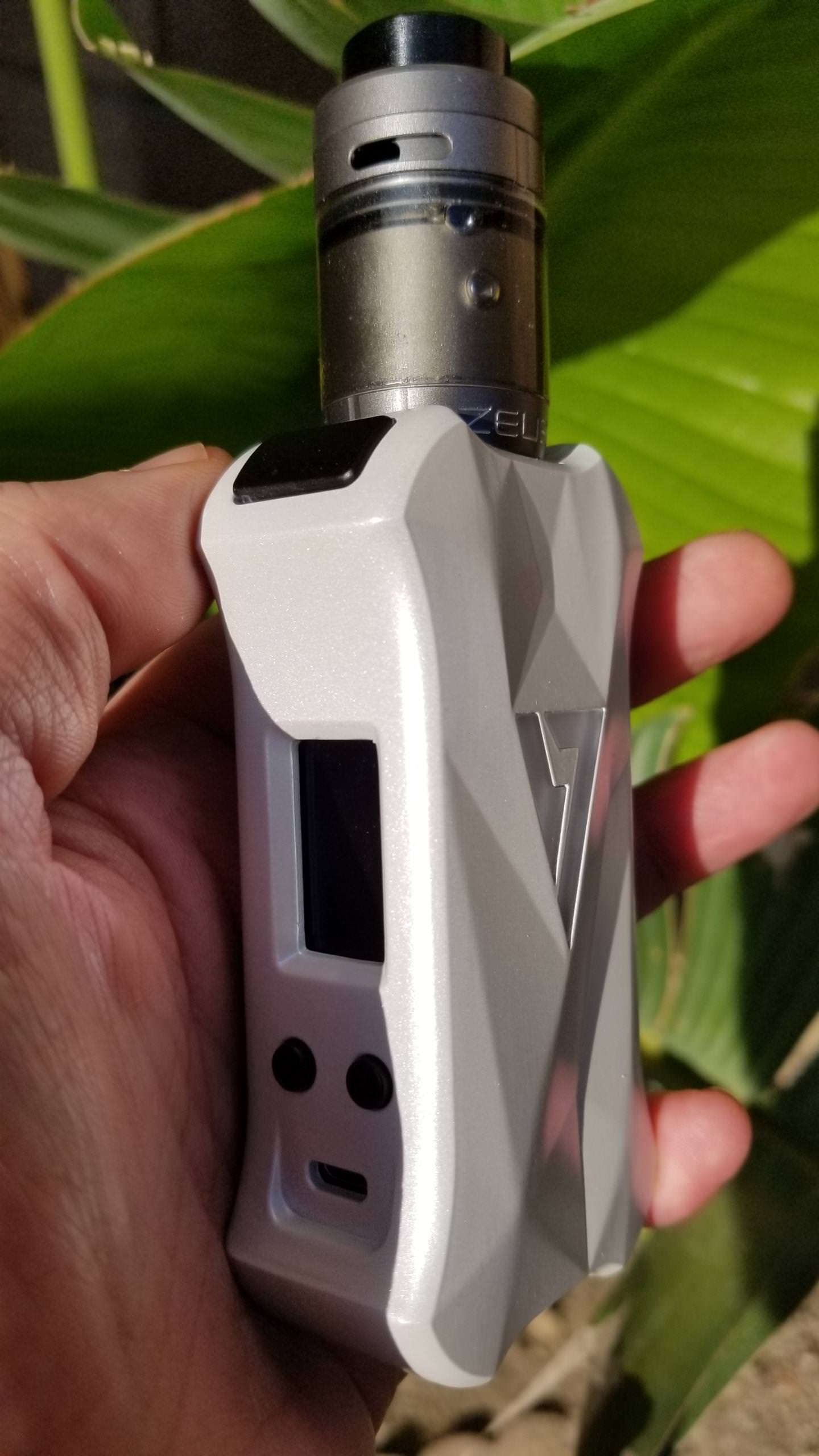 That was the best pic I could take but really, it is beautiful in person. All the colors use the same pearl, according to Desire, they blast the Zink Alloy with an abrasive and bake the paint and pearl finish in, very impressive. 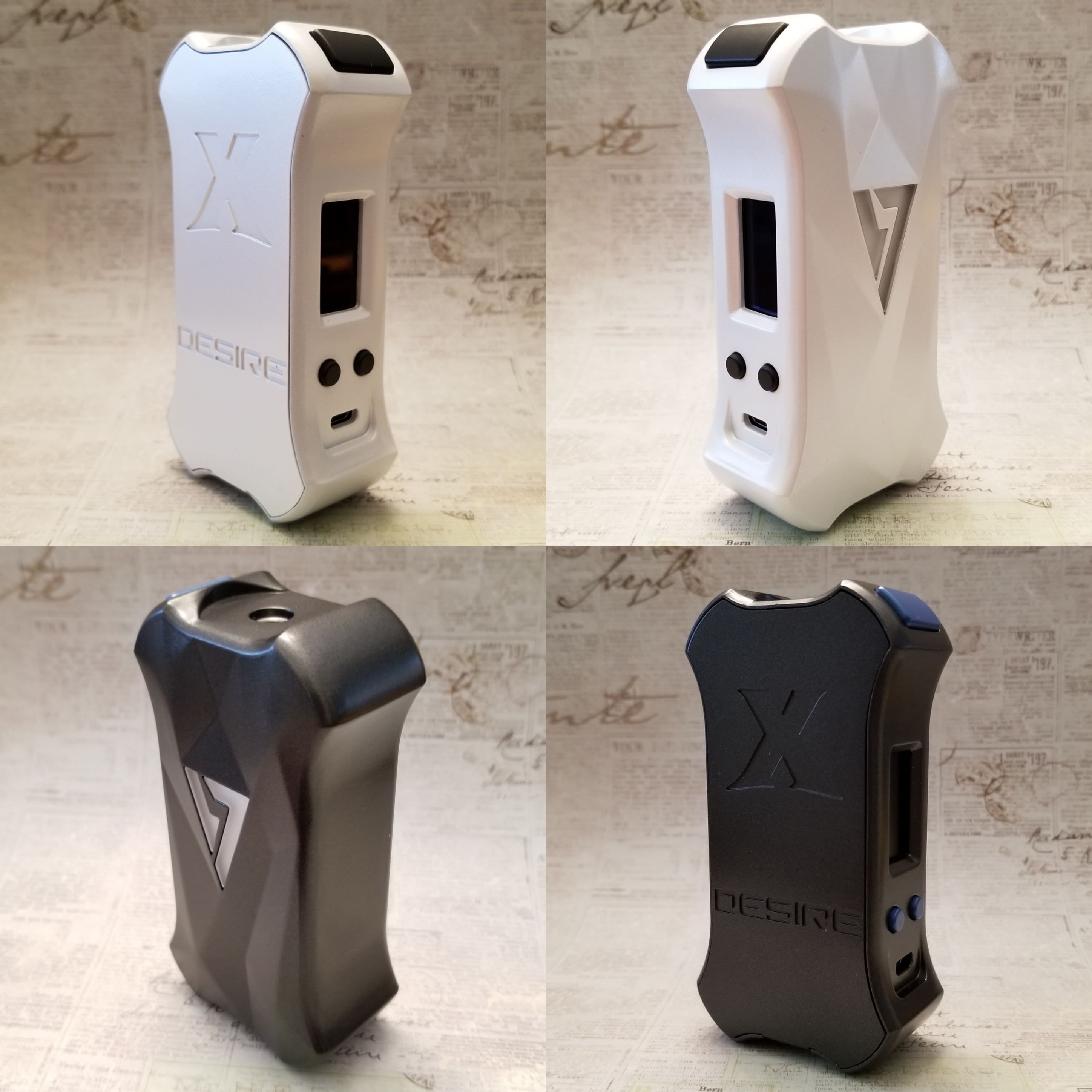 The white comes with black buttons which is a nice contrast and looks great with any color tank. I have to admit the white is just sexy, never been much into white mods but I am into this one. 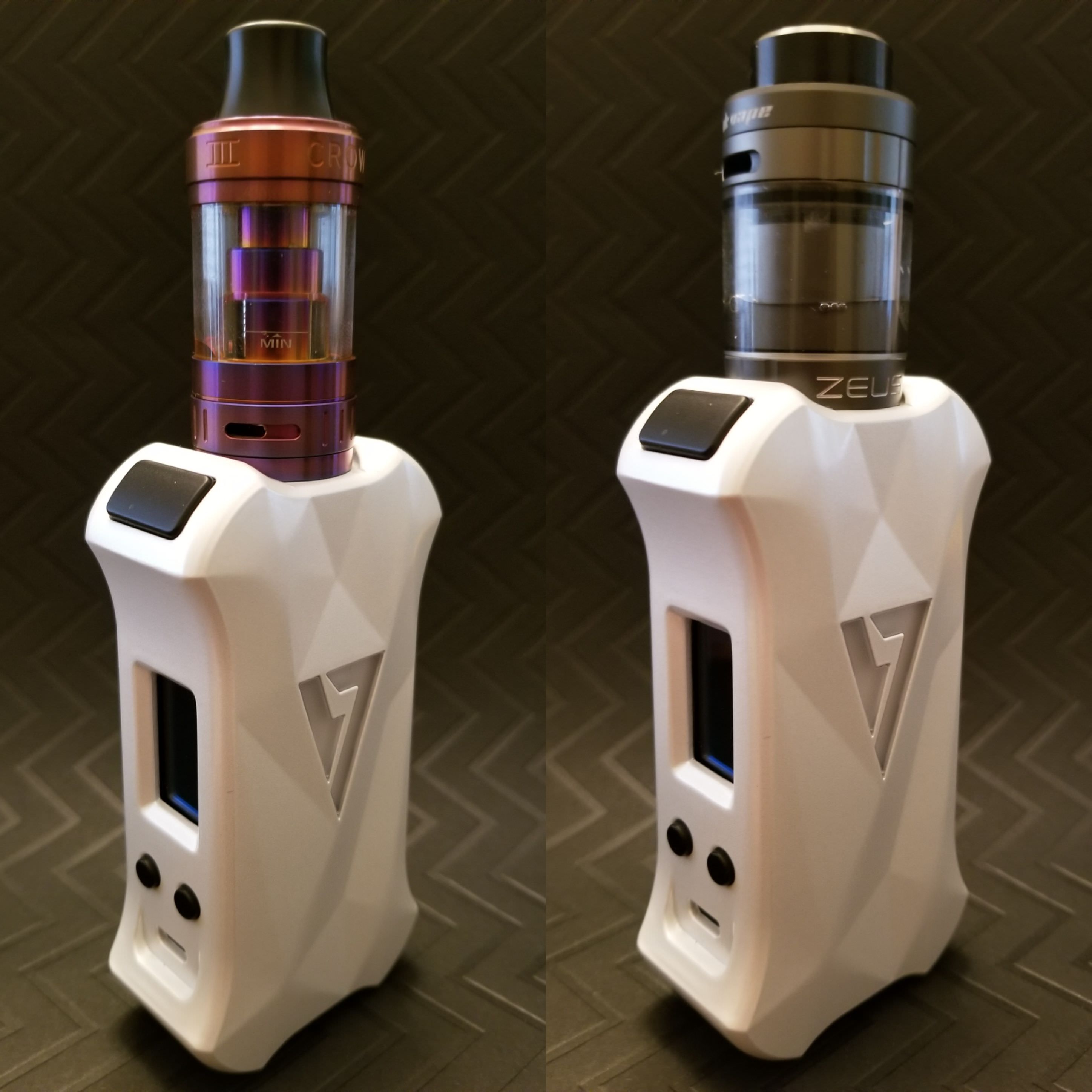 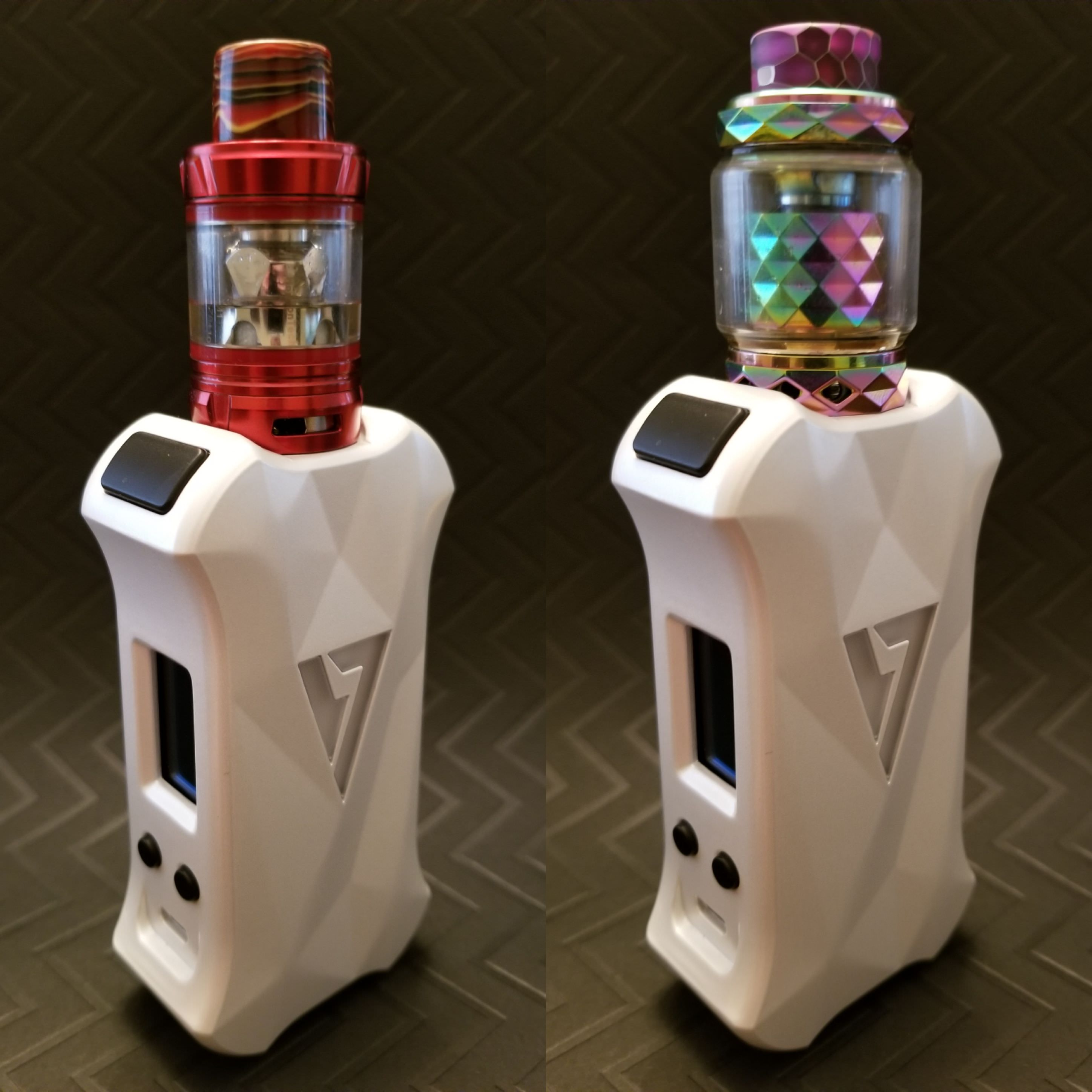 I love black tanks on it though and it fits up to 26mm tanks, my Ehpro Billow X which is 25.5mm at the base fit fine. 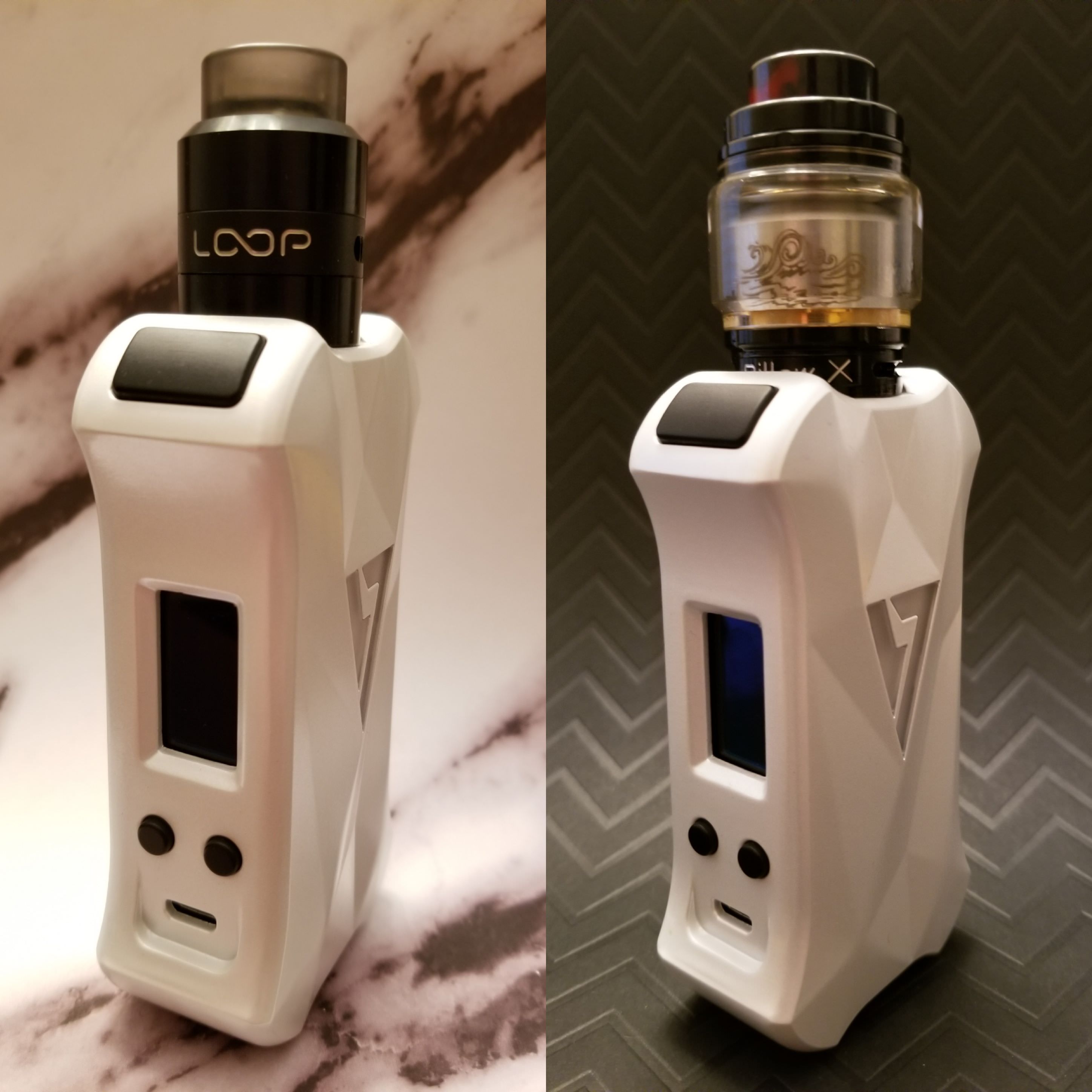 The black is almost more of a dark grey and comes with blue buttons, odd choice I thought at first using blue buttons but now I have something to put my blue tanks on and of course black tanks look good too. 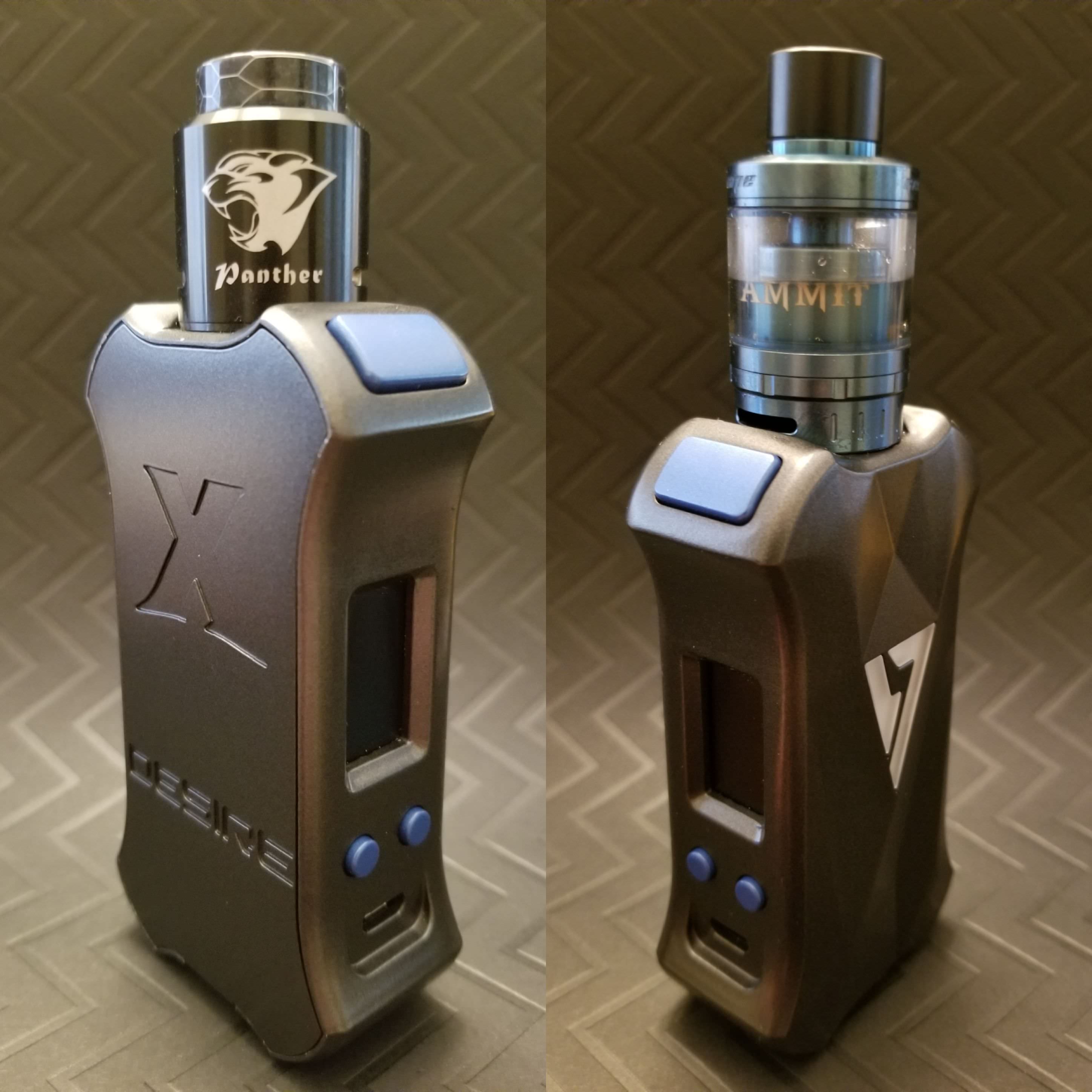 Screen is bright and easy to see in any lighting condition. It also has and LED that glows a bluish purple illuminating the logo on the side. The LED glows when hitting the fire button or you can get it to slowly pulse all the time by clicking the fire button 4 times. 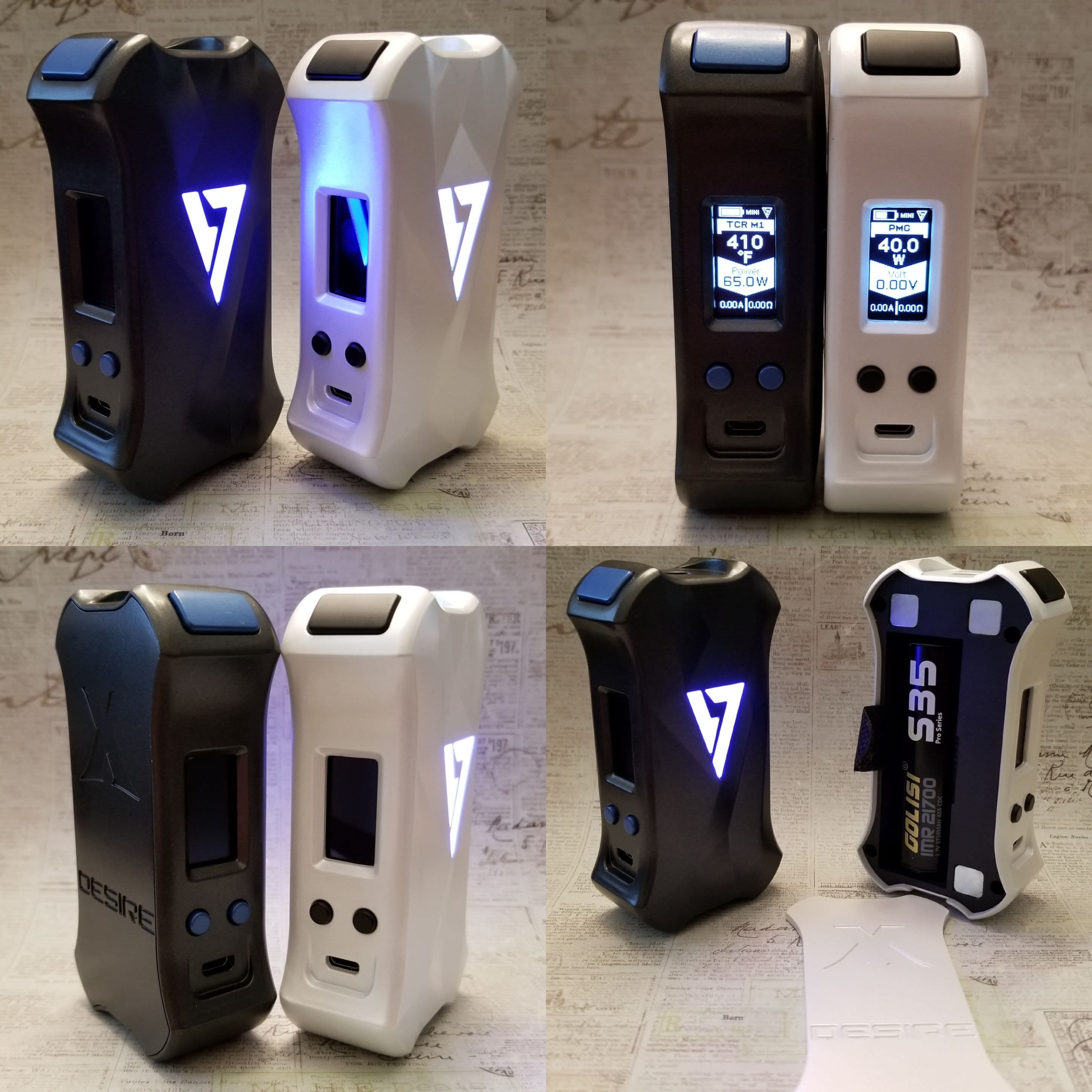 Not the best idea to have the LED glowing all the time unless you just hate long battery life. Sure did make it easier for me to take those pics though 😉

It is mini only in name, meant to only differentiate it from it’s big brother that shared the same style but housed dual 18650. Not light either, I weighed 315 grams with a 21700 installed, compare that to 236 grams of the Joyetech Espion with dual 18650 installed. To give you an idea of the size I put it next to the Espion, one of the smallest dual 18650 mods I have. 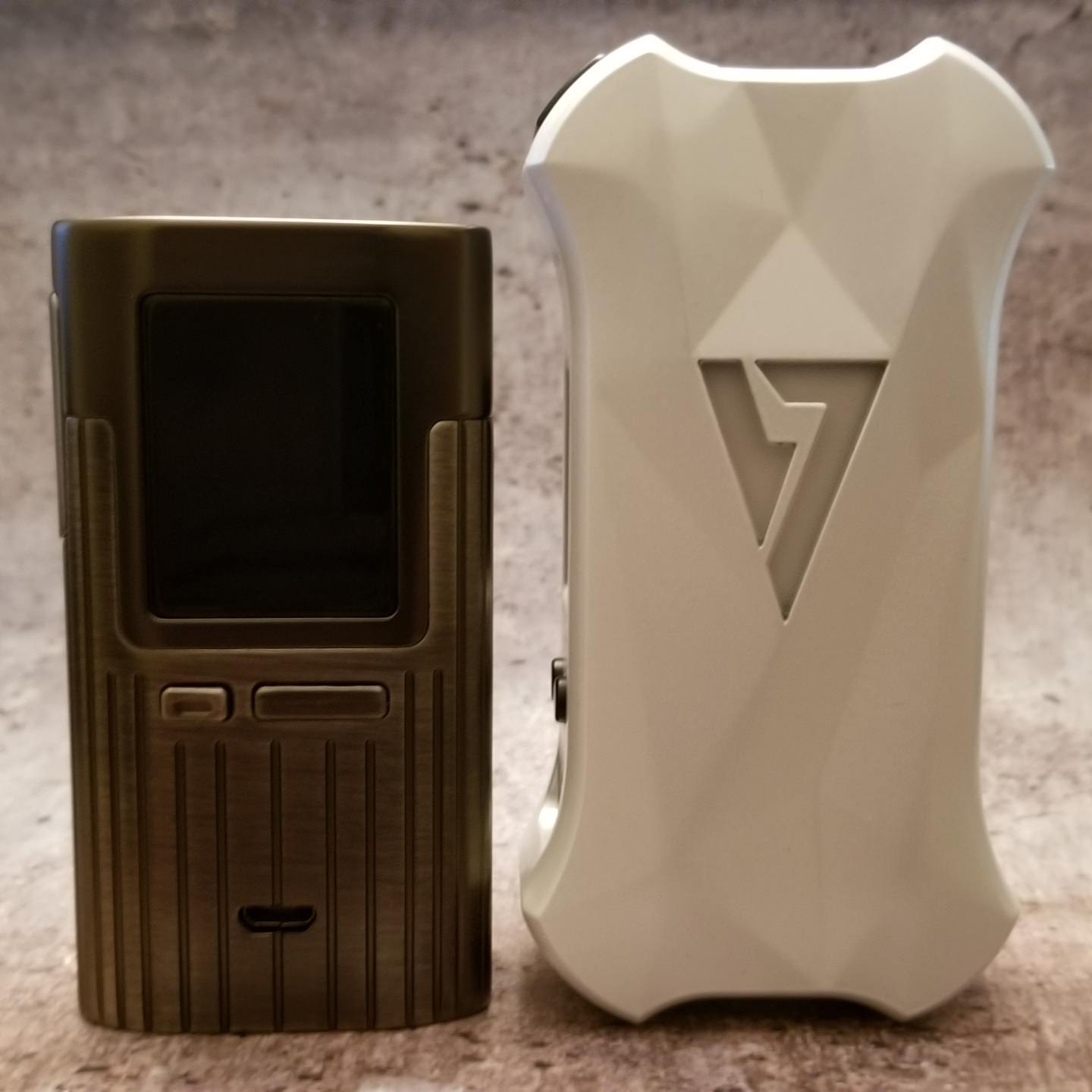 I did find it off putting at first, a single battery mod that size. It does house a 21700 though and also works with 20700 and 18650 with the included adapter that worked great for me. Overall it is a very sturdy and solid mod, I never really felt the weight or size was a con for me, I enjoy how solid it feels.

Battery door does have some play if you purposely try to move it, it has to so you can actually remove the 2.2mm thick chunk of metal. In normal use it did not move around at all for me and is secured by 3 strong magnets but the groove at the bottom makes it easy to remove. The magnets are so strong the bottom one came off just today while writing this review. 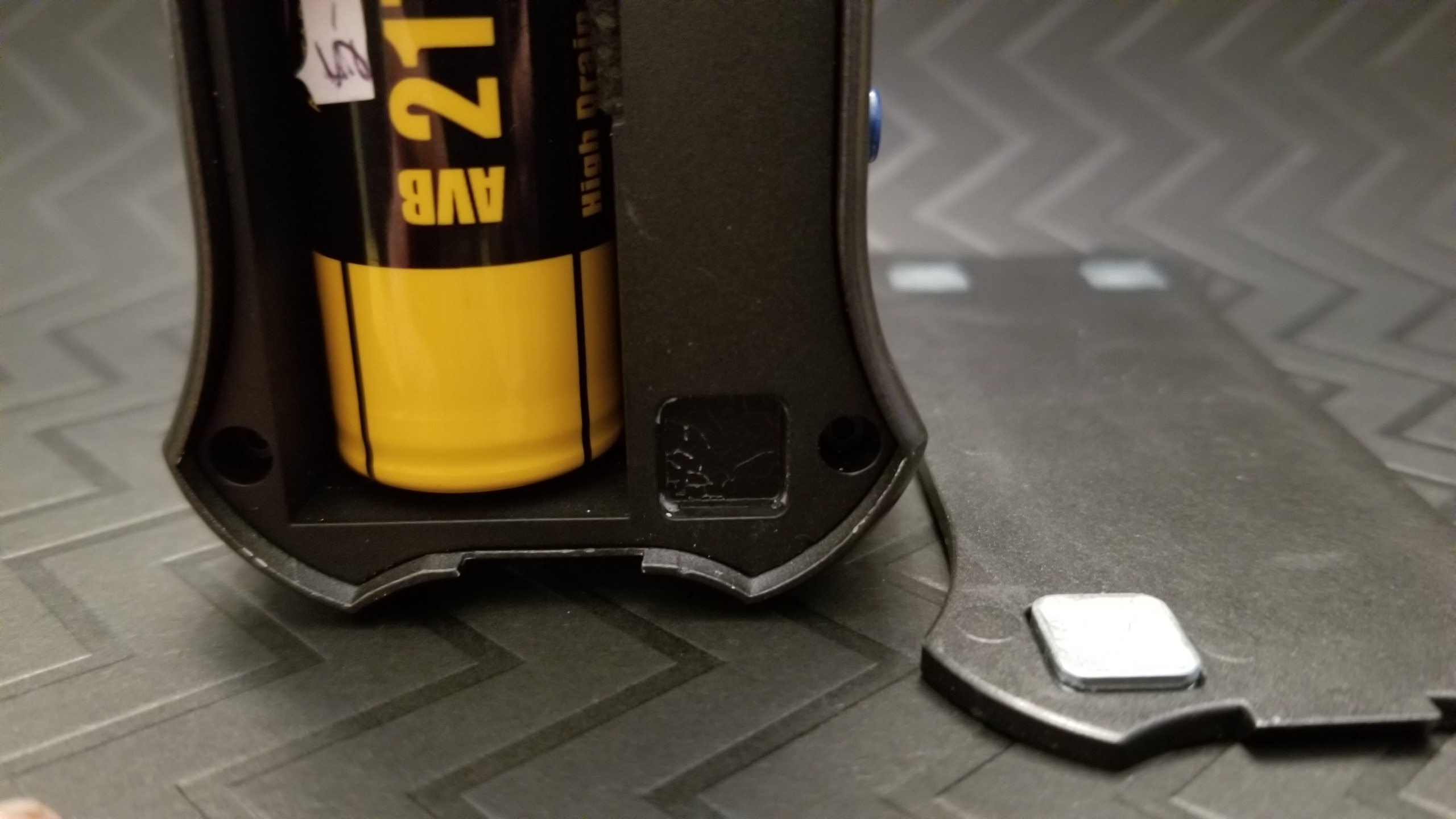 Not a huge deal, I just applied some super glue and put it back on but it held tough for more than a month and the white one’s magnets are all fine.

There is some button rattle on the up and down buttons of both samples, not anything I noticed in normal use, just the customary shake test. The fire button is solid and they all have a nice click to them. I like the location of the fire button as well, easy to fire with either your index or thumb and really easy to find without looking.

Comes with a 18650 adapter, USB cable, owners manual and 2 clear plastic mod protectors to sit under your tank. I never even used the mod protectors and just had slight tank rash. 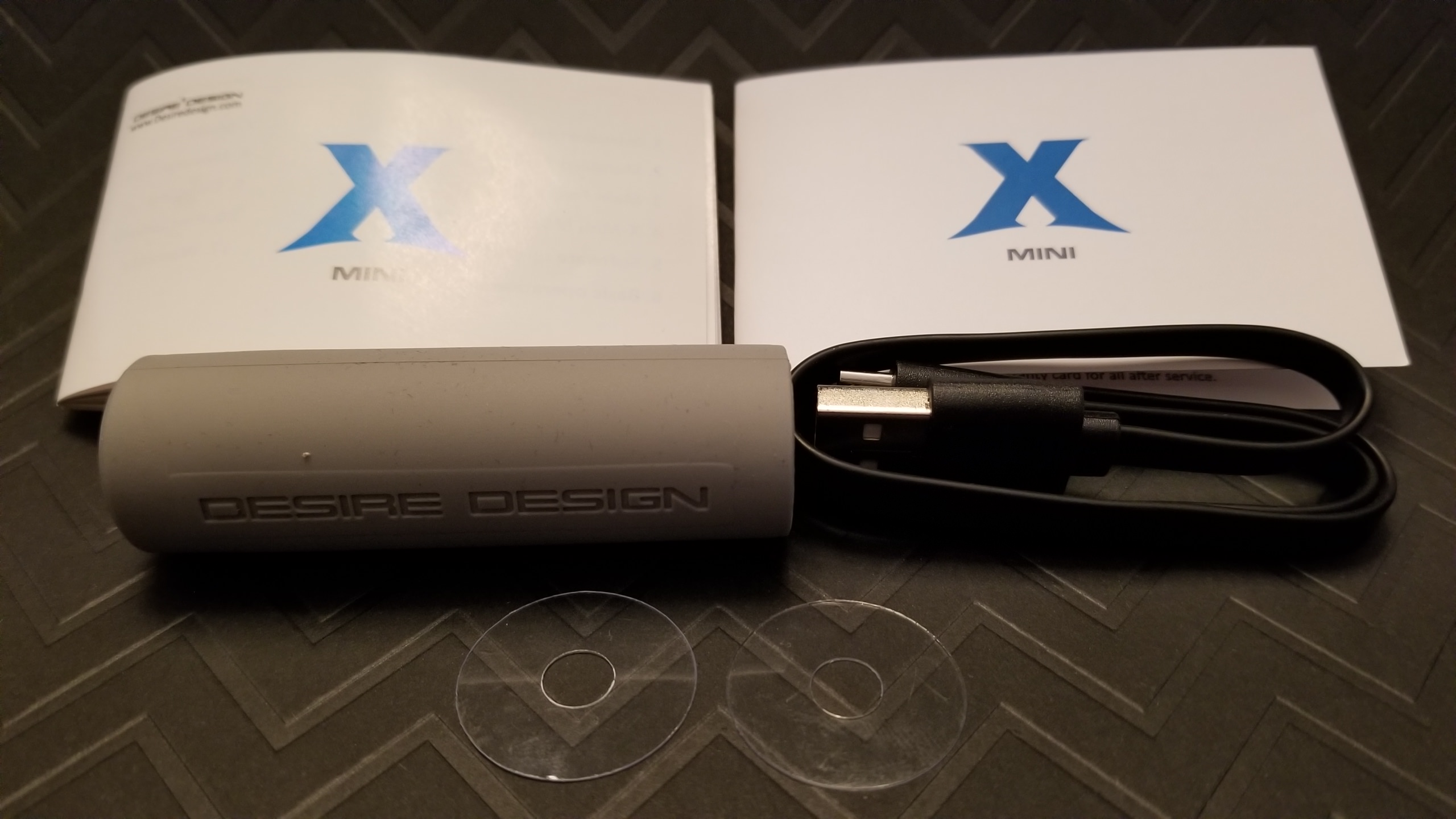 That is what I keep telling people, it is my insides that count, there just as messed up as my outside. Enough about my problems, let’s check out the X Mini insides.

Solid enclosure, this is where the weight comes in and it is a tough shell. 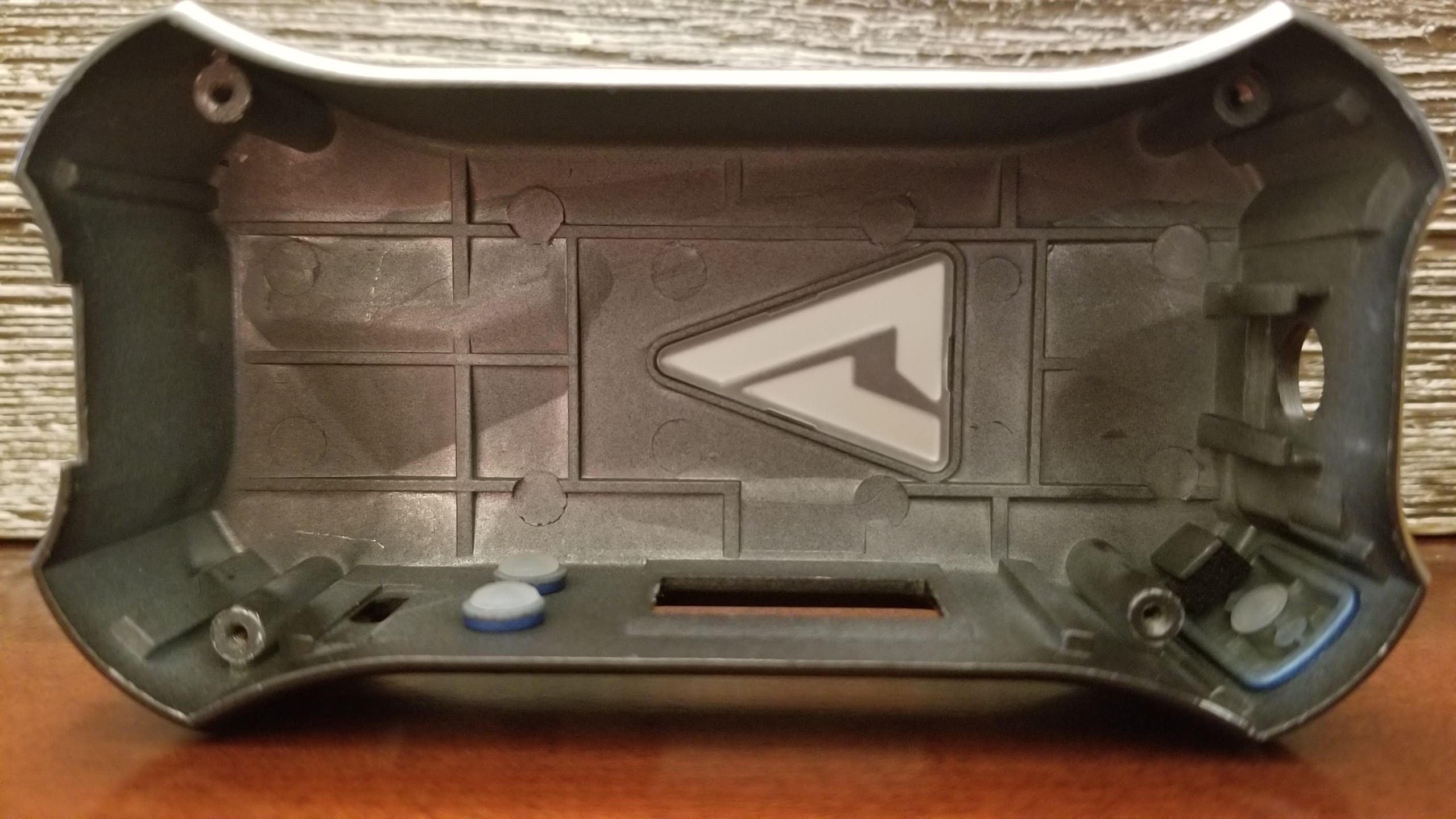 Thick gauge wire connecting the 510 and battery contacts, I like. 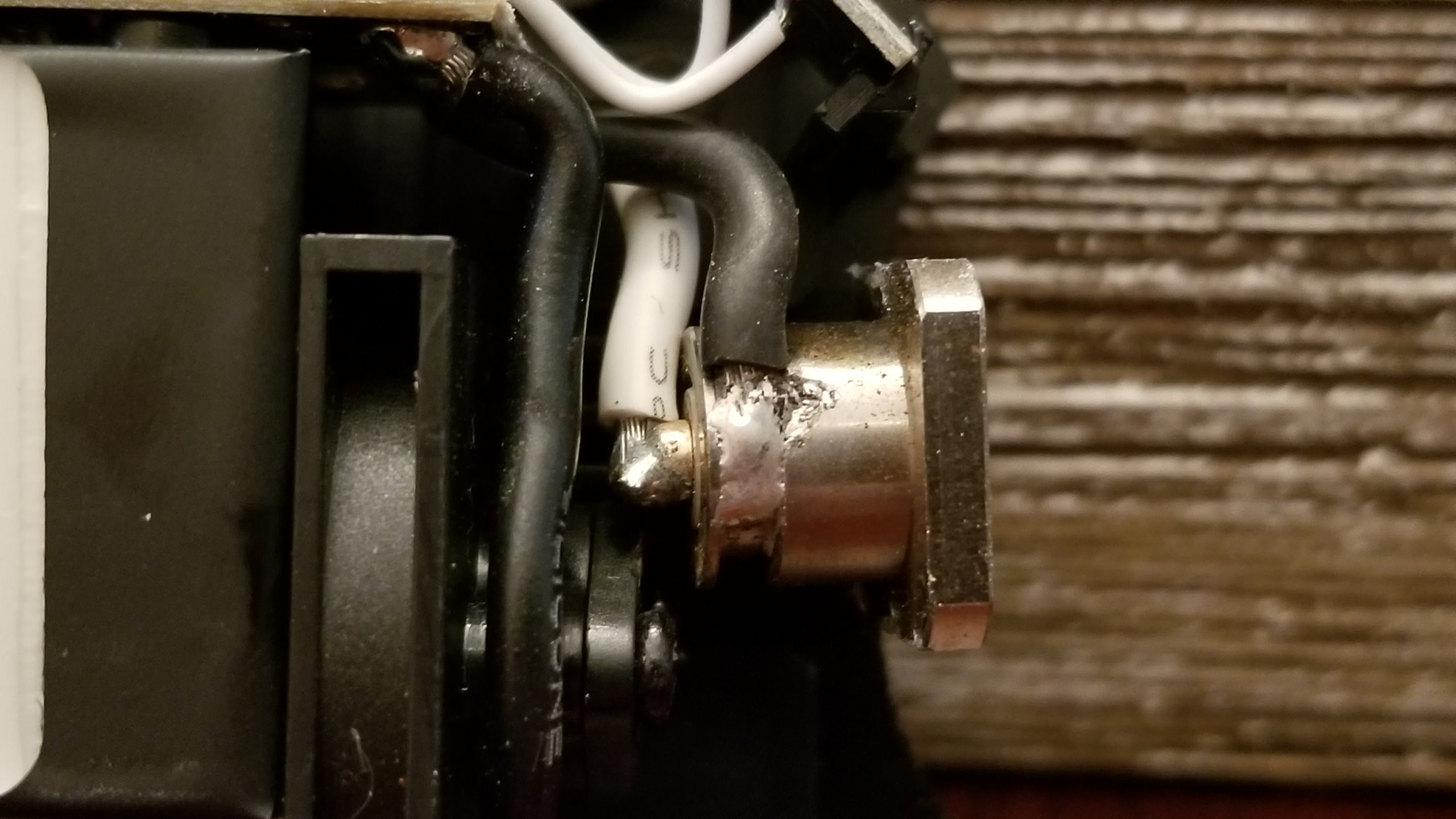 Stainless Steel threading and the 510 has plenty of travel, no problems with any of my tanks. 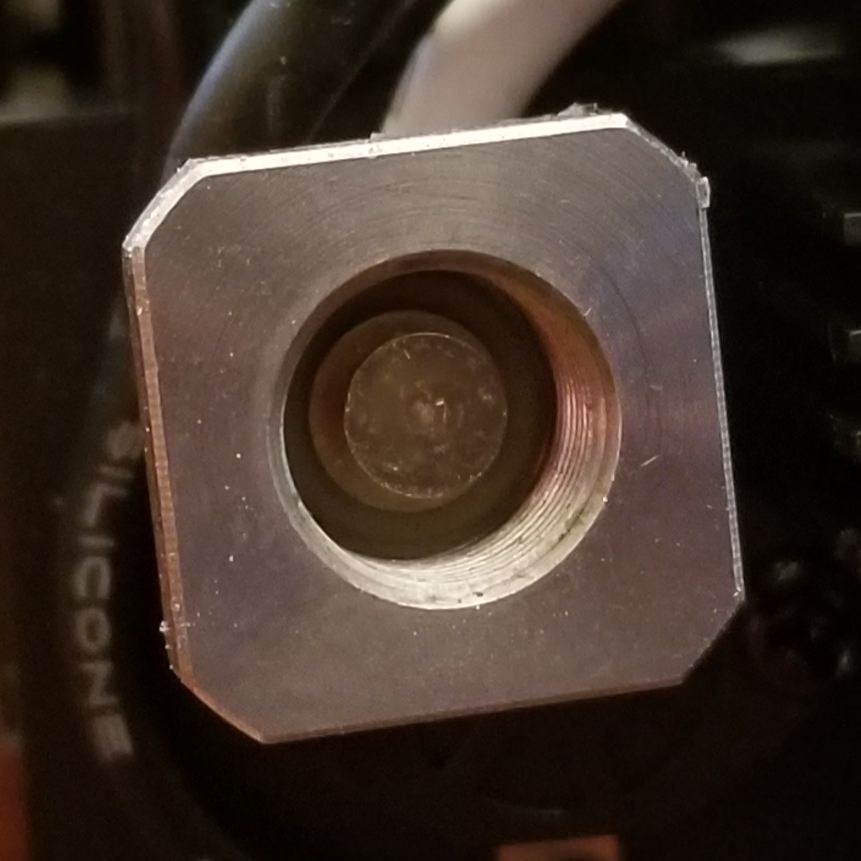 The 510 plate is secured into the metal groove in the body. First time seeing it done like that but sure does feel secure, no complaints by me. 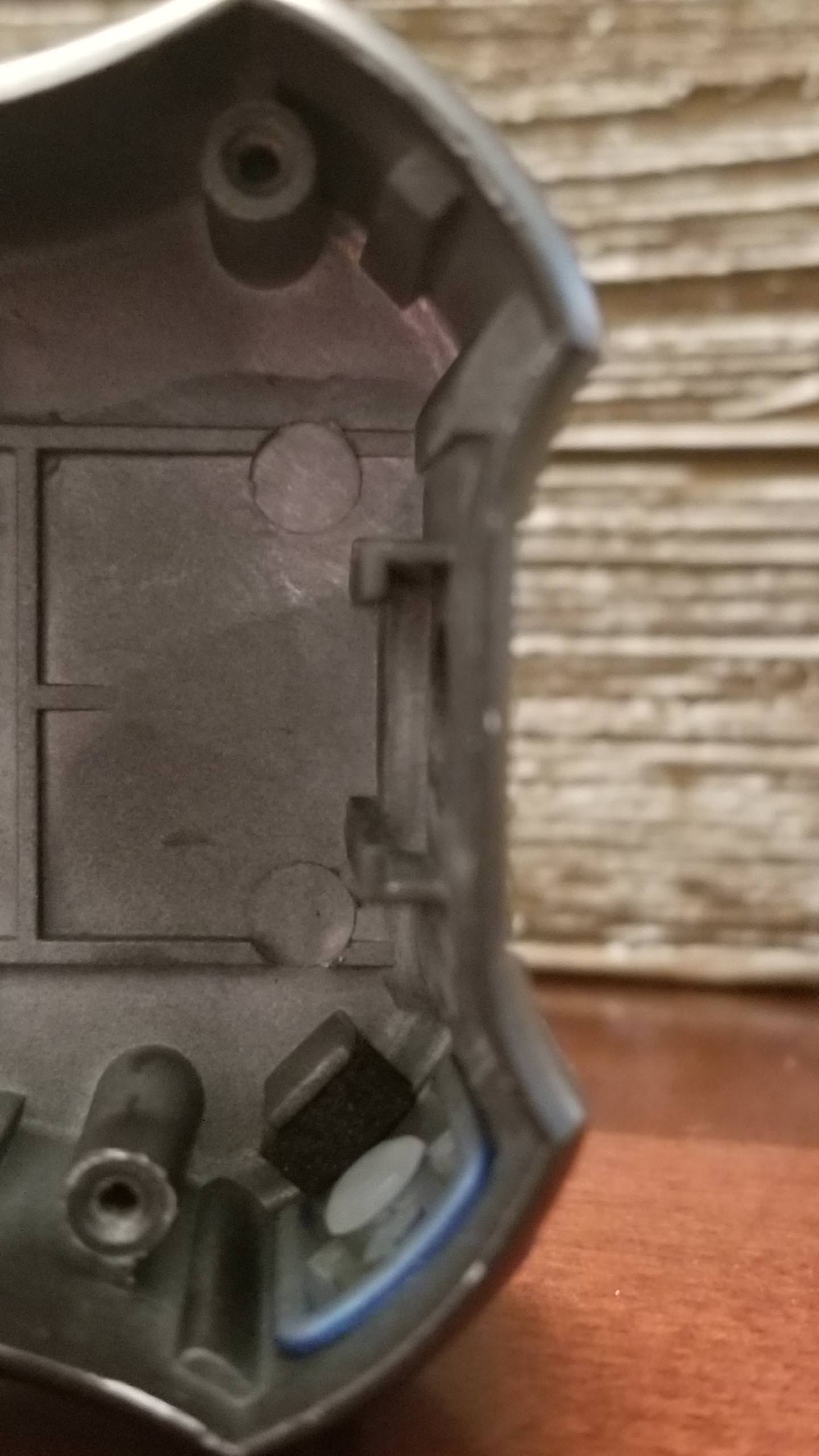 Clean looking board, I like there attention to detail. 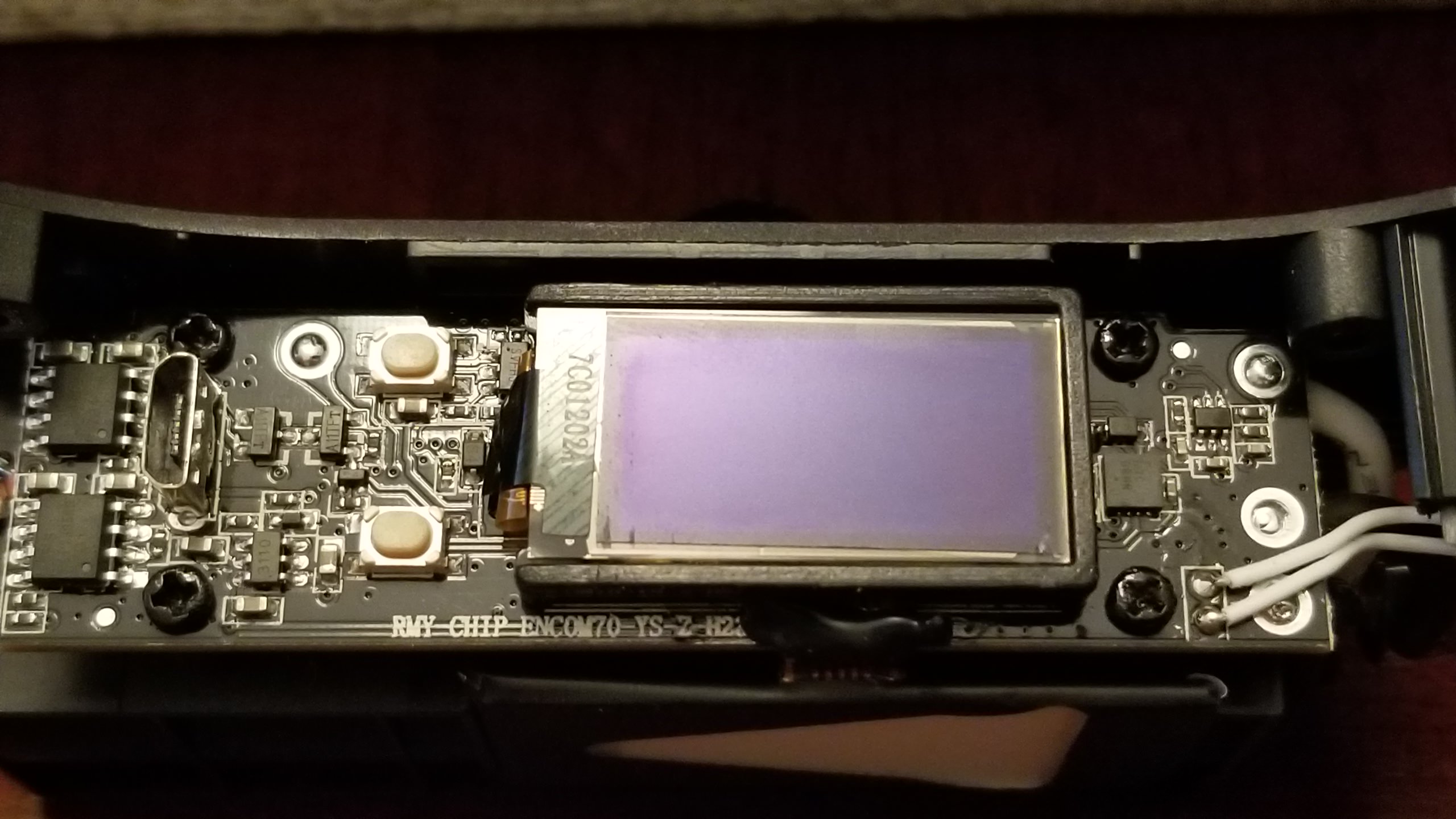 Overall this is a well built solid mod, the only problem I had was with the magnet coming off when I removed the door.

The finish has held up very well, just a small nick on the black is all I suffered in the month + of usage, barely a pin hole.

Not much to complain about, hits quick and hard, maybe a little too hard full out at 108 watts. Comparing to my SxMini G Class at 108 I was able to get dry hits quicker with the X Mini using the same tank. At least it is not whimping out but I would advise against getting this if you vape 100 watts all the time, battery life is going to suck. I wouldn’t recommend any 100 watt mods for vaping full blast though but I really enjoyed it at the 60 to 75 watt range I normally vape at.

No preheat options while in power mode but they do include a separate mode called PMG which stands for Power Multiple Graph. This allows you to set up a power curve and works in multiples. Starts at the first 0.05 second then goes to 1 second all the way to 4 seconds. Each one allows a multiple of the power you have set. It is a multiplier so 1.0 will be whatever you have your power set at, if it is 50 watts then 1.0 will be 50 watts. You can setup the multiplier up to 2.0 which would double the power your set at, 50 watts would then fire at 100 watts for that first 0.05 second. If you then set the 1 second mark to 1.5 then 50 watts would fire at 75 watts and so on a so forth. It works fine but not as easy to use as say the VPC curve in the GeekVape mods, I preferred using the X Mini in just straight power mode but hey, you may like it and it works.

Watts are adjusted in 0.1 increments until 75 watts then it goes in 1 watt increments. I would have preferred to have it begin 1 watt increments at say 30 watts but it does flip through the adjustments rather quickly so not a huge gripe. 5 watts to 108 watts and it does round robin so you don’t have to scroll back the other way.

A little bit of a mixed bag here depending on the build I was running. With some single coil builds the performance was spot on but some dual coil fancy builds were either hot or cold. Was never off big time and once I dialed it in it was a consistent and smooth TC vape. TCR didn’t help much, at .92 it was cold with the majority of builds. It comes with 3 TCR memory slots so I set one to 105 and another to a whopping 125 to deal with some trouble builds. I was able to get a very good TC vape with each and every build I tried, it just took some fiddling most of the time.

Once dialed in I have to admit that I enjoyed using it in TC and did so for the majority of my time with X Mini in the month I have had it. It is not DNA or Yihi quality TC but it was enjoyable nonetheless and I would put it in my 2nd tier of TC mods if you don’t mind tinkering.

For this you will need the owner’s manual which I normally detest, I am a man for God’s sake. I had to dig it out to find out how to adjust the TCR though. I will quickly go over that, turn off the mod with 5 clicks, hold the fire and right button 3 seconds to enter TCR adjustment mode. Once there use the fire button to switch between the 3 TCR modes and use the left and right to adjust. Once done press and hold the fire button to confirm and exit.

The owners manual is really good at showing you how to work the mod, don’t lose it if you memory is not that good. Not the most intuitive menu but once I had it all figured out it became easy, just different than a lot of other mods.

When I first got the Desire Designs X Mini I liked them on the first day. The TC was a bit disappointing but I was able to get it to give me really enjoyable results with just some tweeks. This has been an easy review to do for me as I have just been enjoying my time with the X Mini. Sure it is heavy and big for only having a single 21700 but I find myself reaching for it a lot and not just because it is a review item. I can honestly say I like the X Mini more now then I did when I first opened them up and I really like them then.

It is not a mod for everyone though, if you are a high wattage vaper, 100 watts plus then a 108 watt mod is clearly not for you. If you are looking for DNA or Yihi quality TC then this would be a step down. There are definite cons but I still enjoy using the X Mini so much that it will remain in my stable of mods for sure.

Desire Designs has been killing it lately, have you checked out the Rage Squonk yet?….I mean c’mon, I want one so bad and there Cut Squonk looks like a winner too. You can find all that info here: https://www.desiredesign.com/