Thank you for taking the time to read my review of the Ehpro Billow X RTA which was sent to me by Christina and the fine folks at www.heavengifts.com

3 colors to choose from: 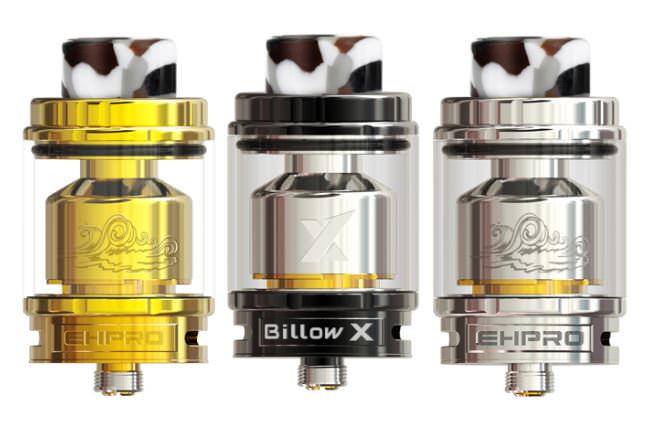 Billow, I hardly even know yow

I don’t even know what that title above means? Oh well, I am here to talk about the new Billow X from Ehpro. The Billow RTA has been around for quite some time and with various version over the years. Jogging my memory I did get a Billow V3 from a friend of mine but remember the airflow being a bit too tight for my style vaping. The Billow X is a different animal than the V3 I use to have, airflow galore and a bigger tank…..I was impressed upon opening the package. 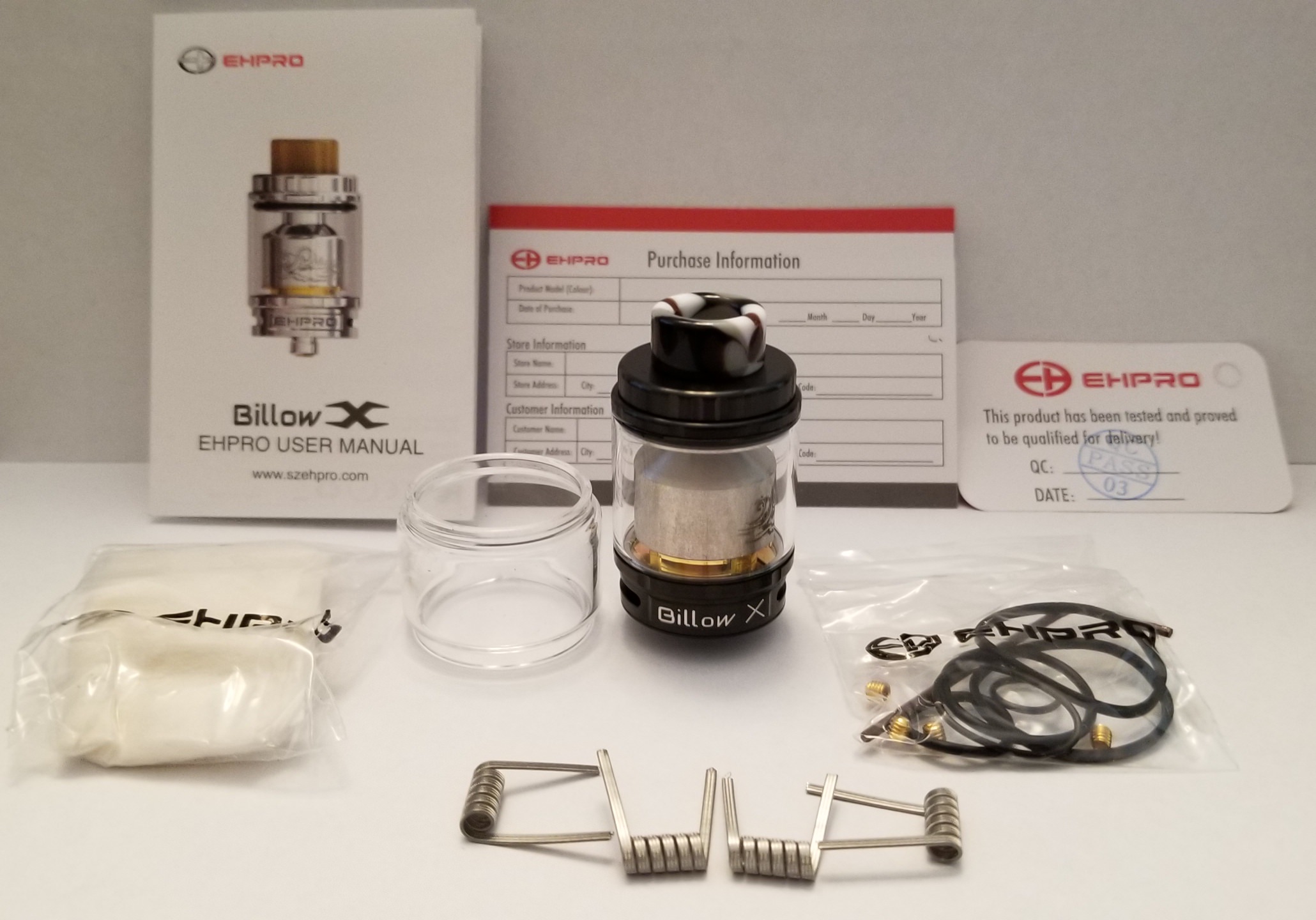 Measures 27mm with the normal glass and 30mm with the included bubble glass. It tapers down to 25.5mm at the base making it overhang friendly on a variety of mods. 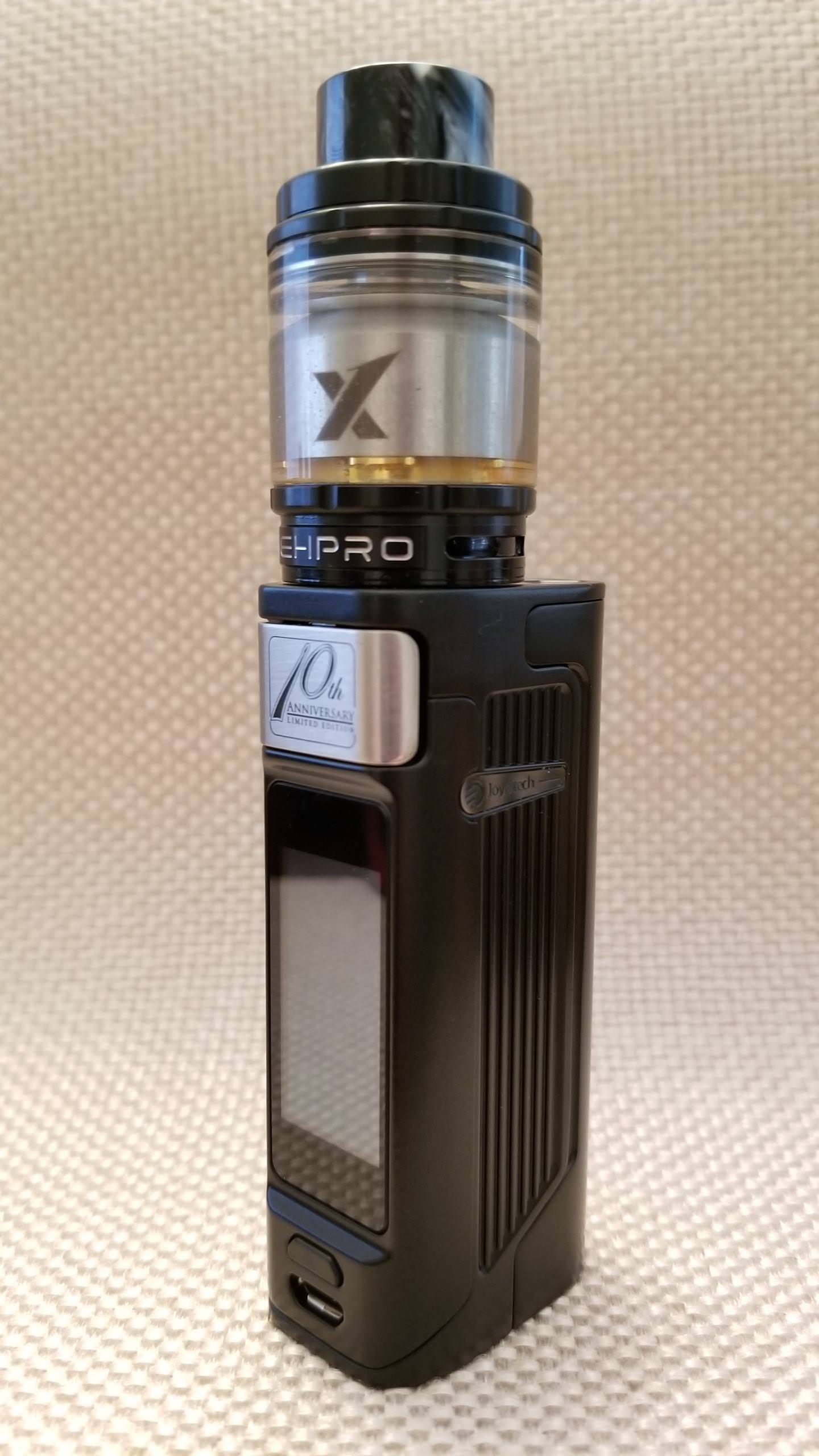 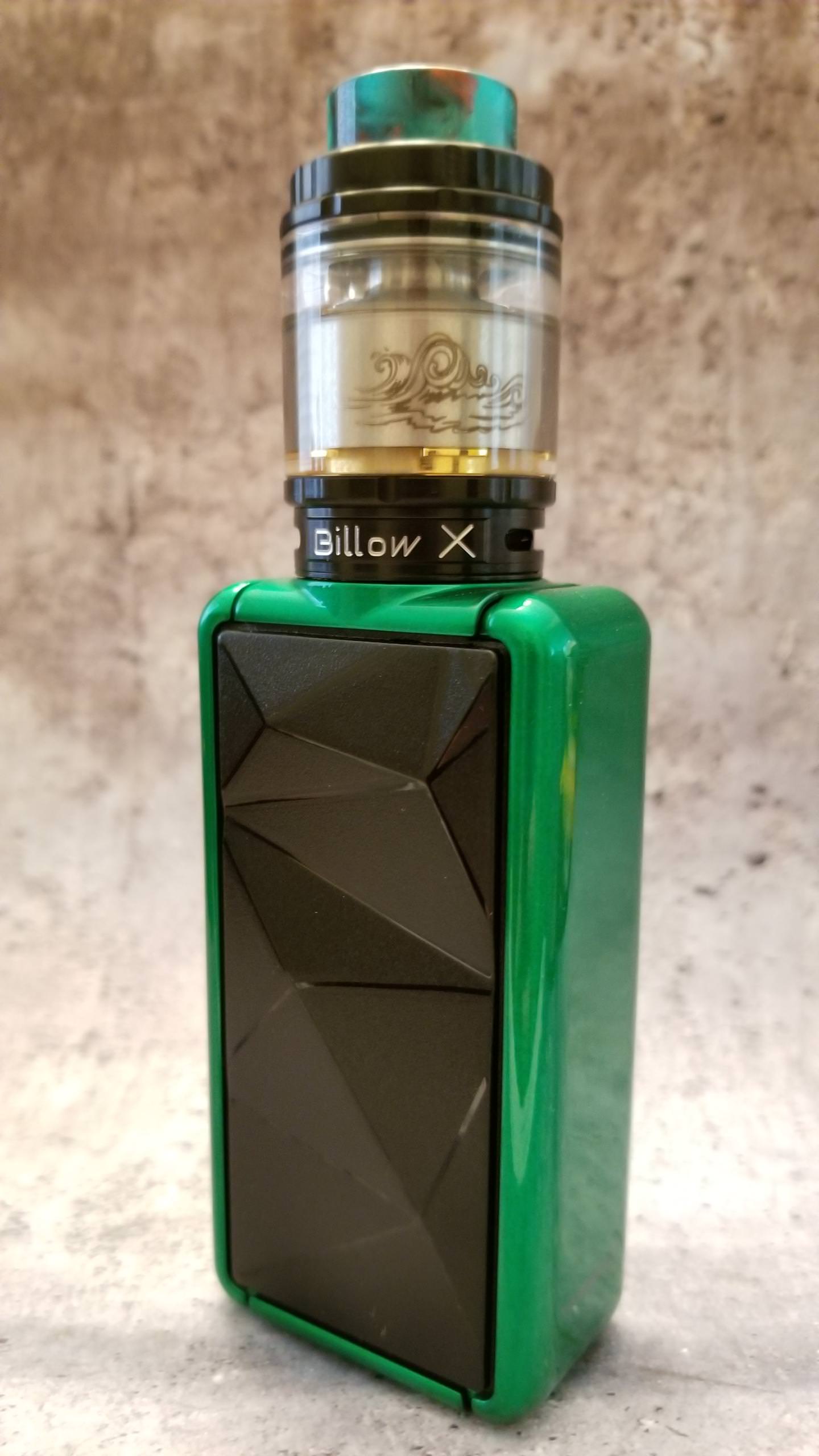 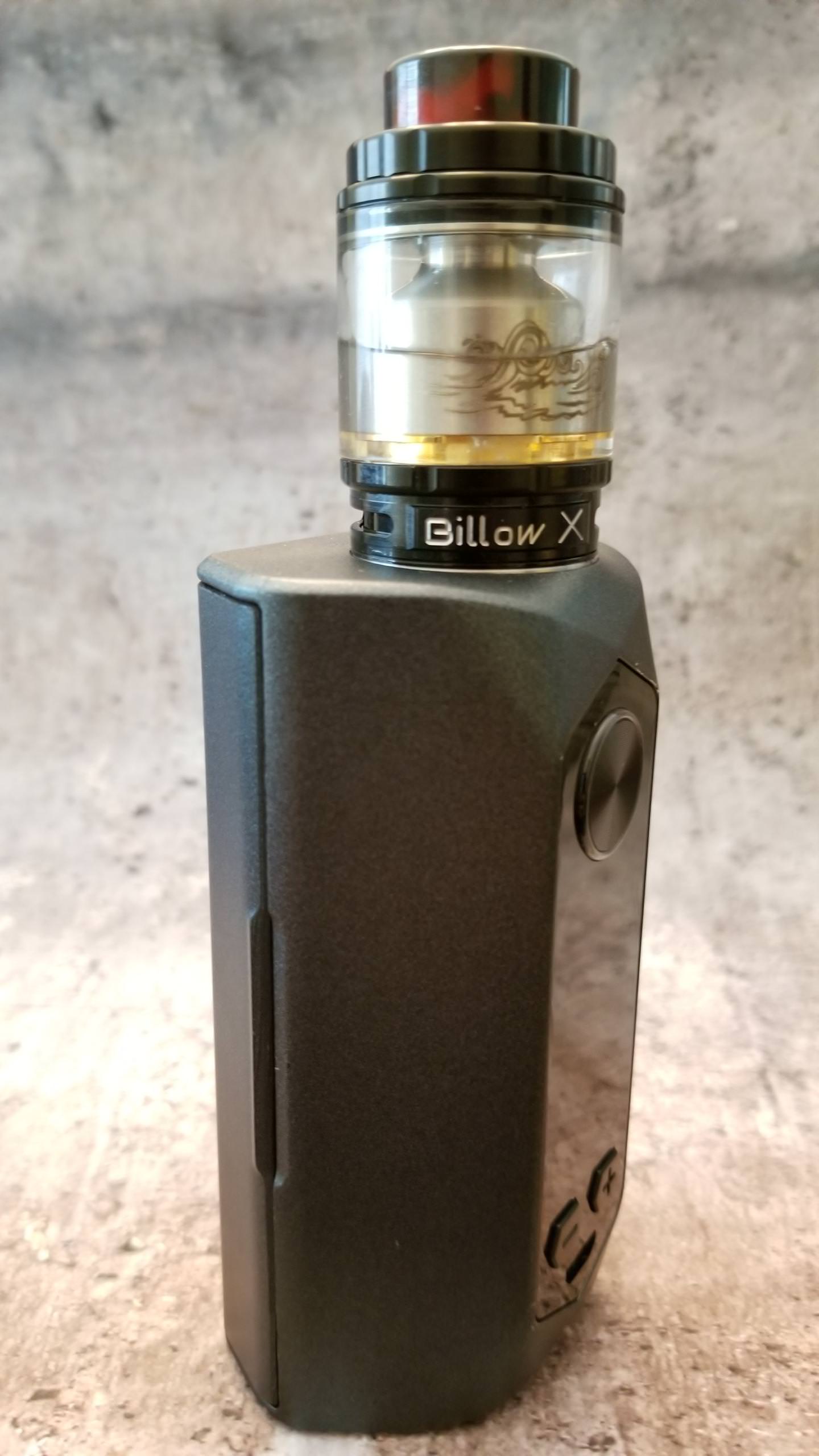 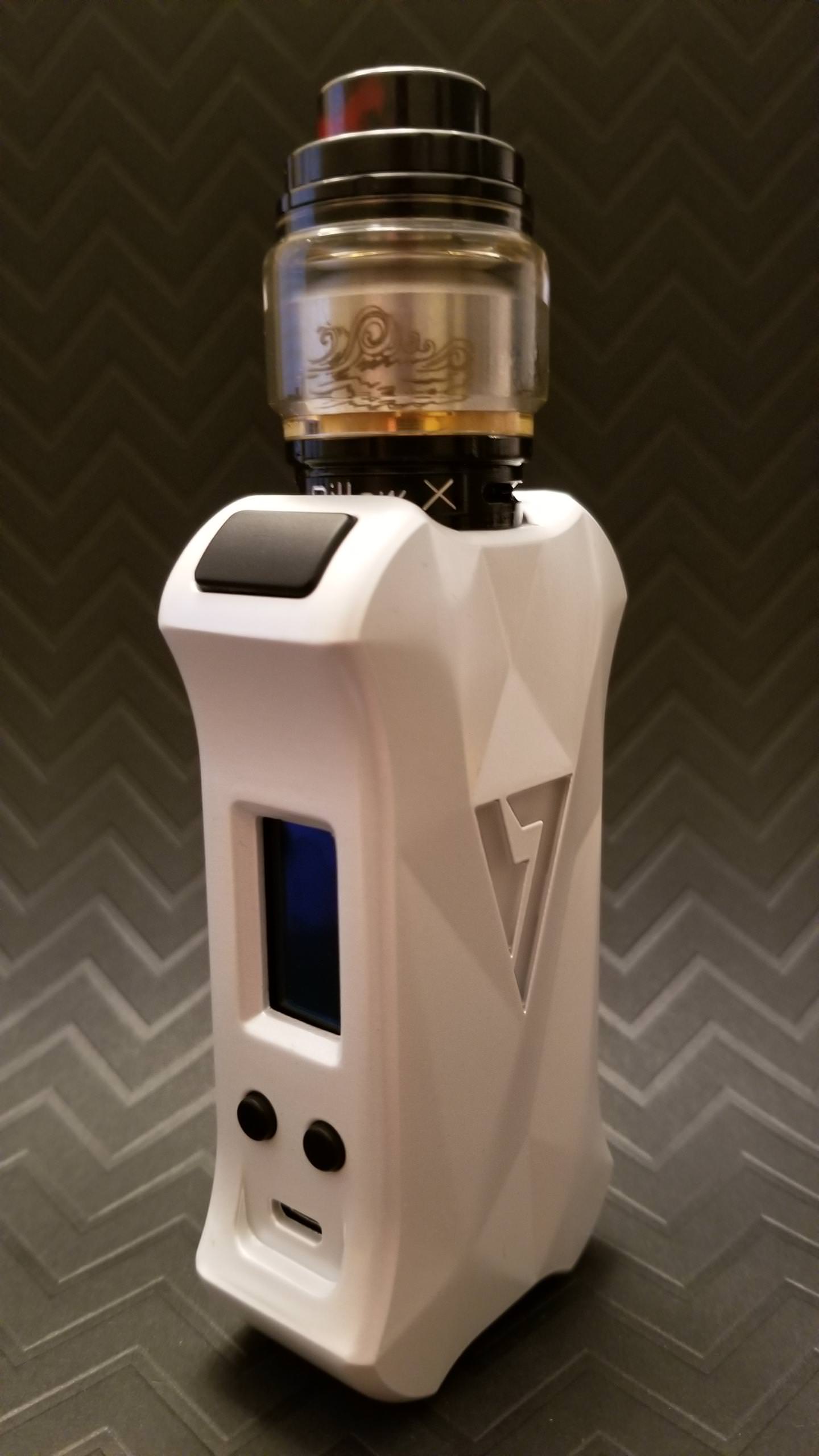 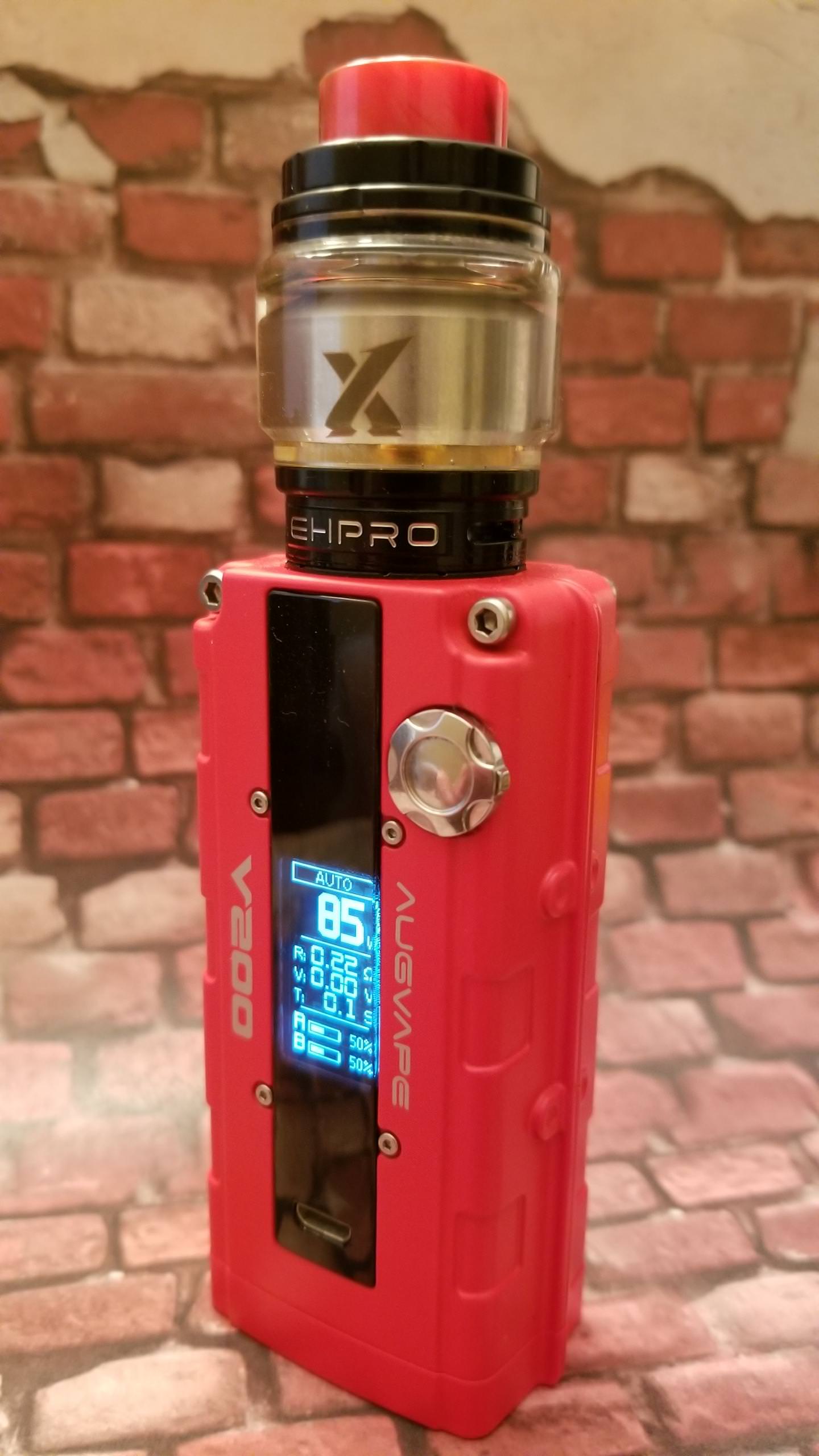 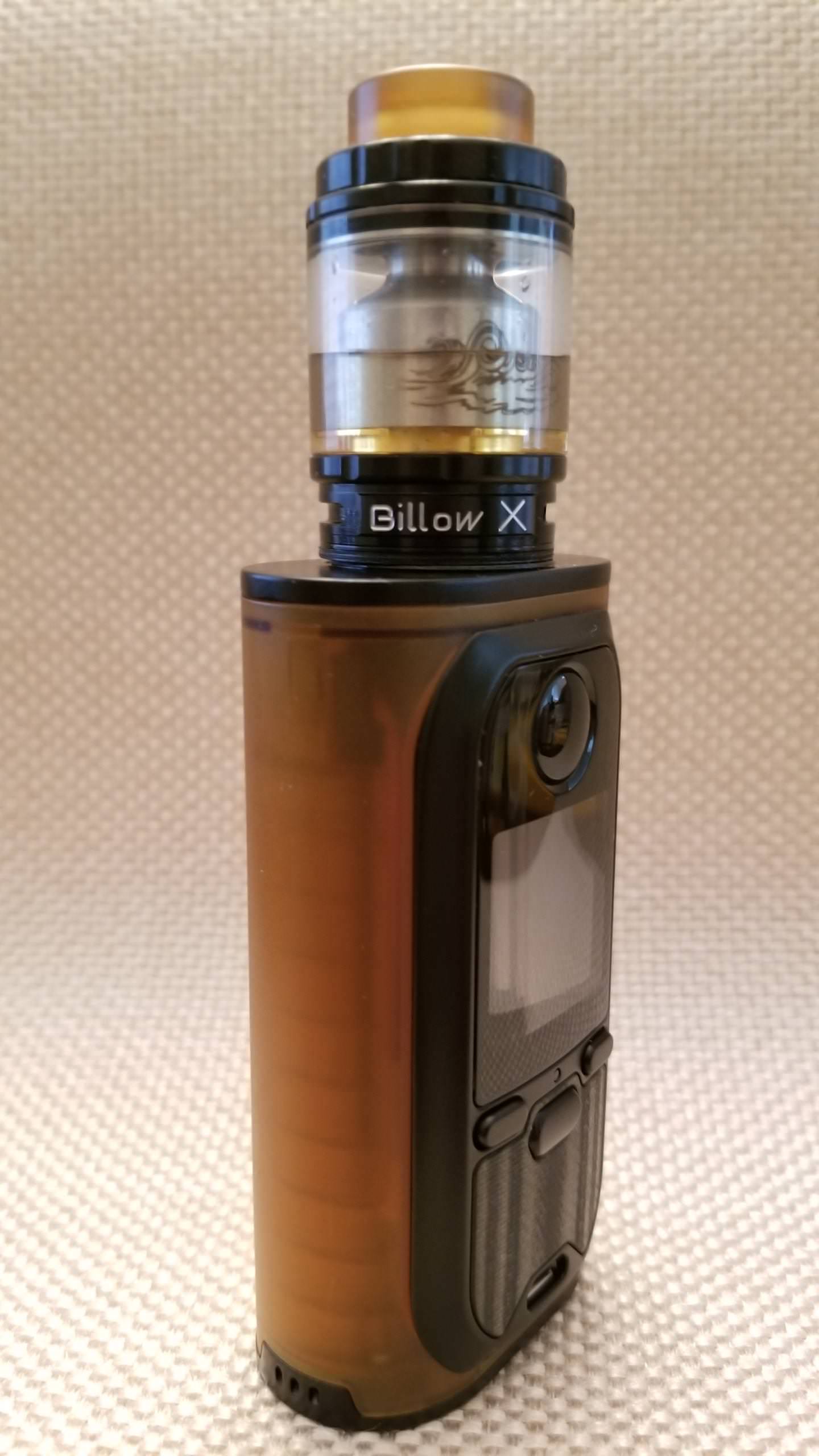 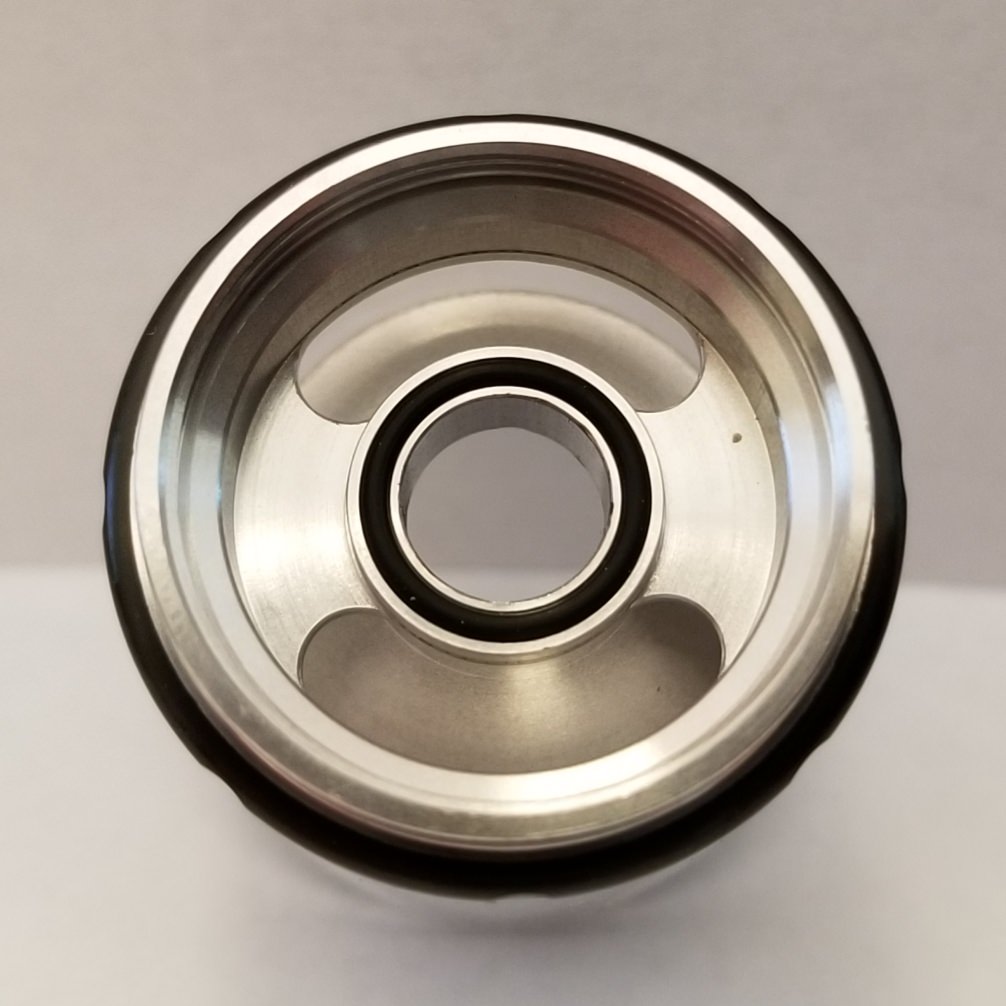 Tapered chimney for better flavor and a laser etched logo of a squid body surfing? 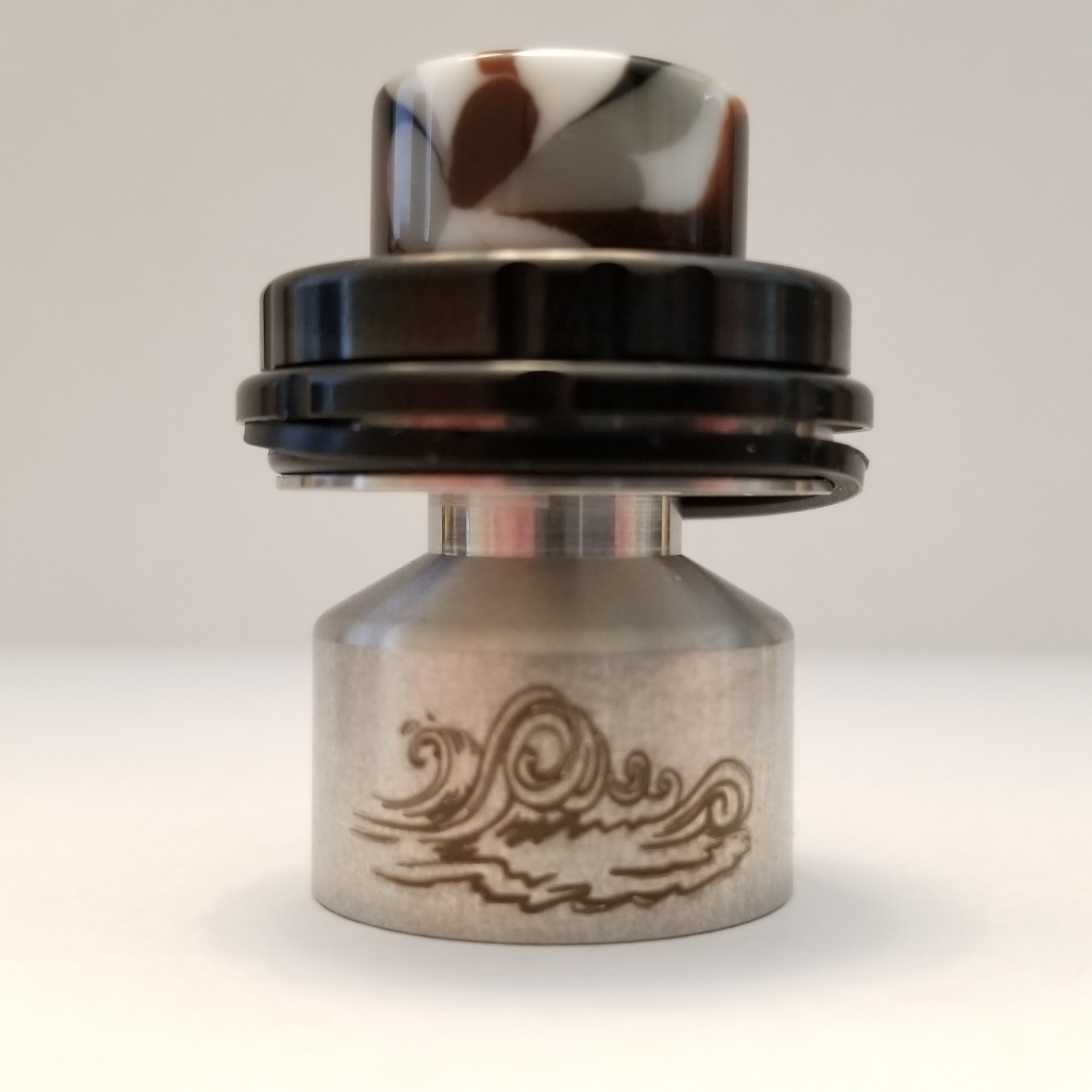 Big fan of the gold-plated deck which features staggered post holes for easy coil installation. Top down grub screws for wide builds so your leads don’t get twisted is always a good thing. 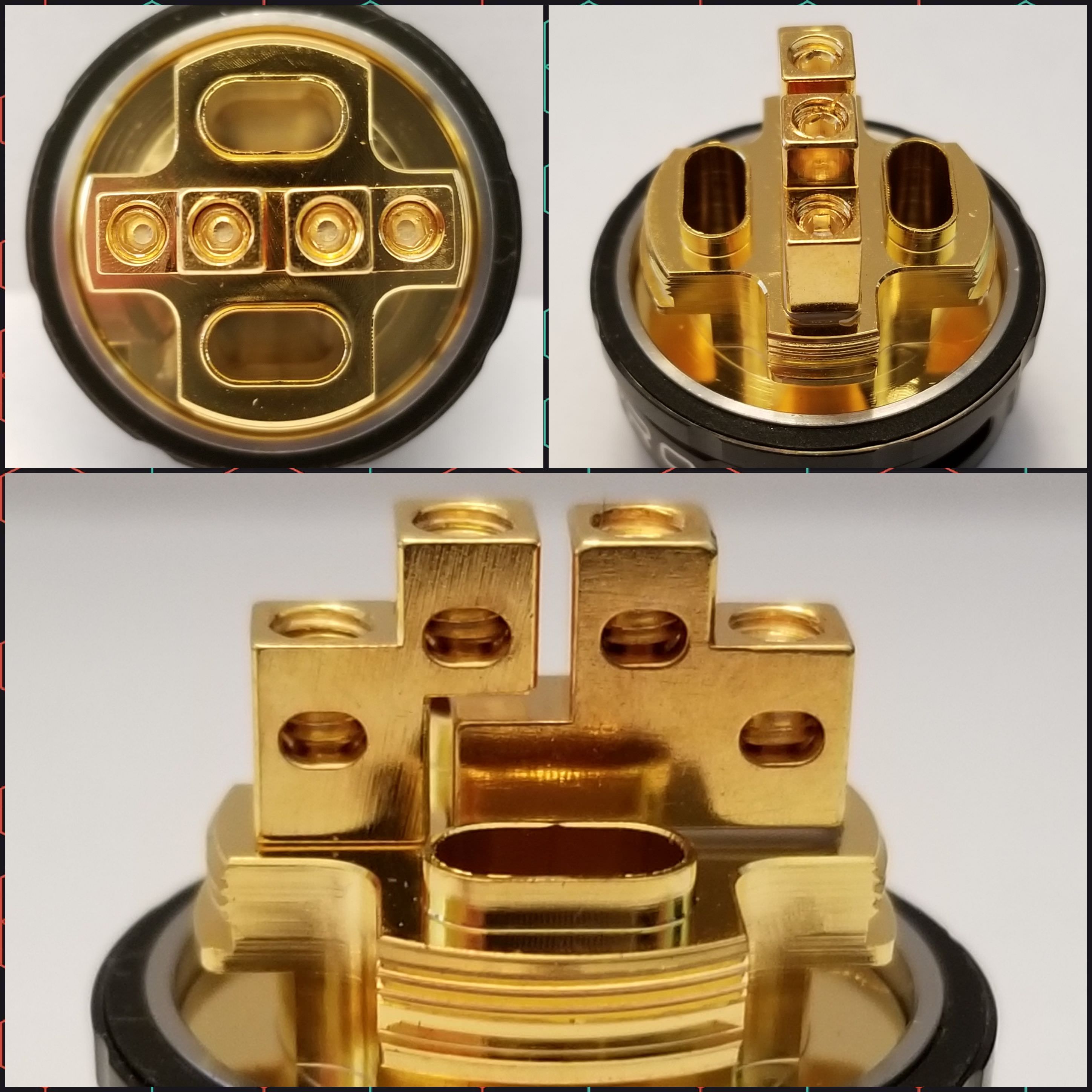 About the only thing I didn’t like was the included 810 drip tip, a bit too small for a big tank IMO. Didn’t have any problems using my friction fit 810 drip tips and most TFV style oringed 810 drip tips fit well, just a few would leave a slight gap.

Ehpro tanks I have reviewed in the past generally include nice quality coils in the package and the Billow X is no exception. 4 Triple core fused claptons is what you get, I am guessing Nichrome, I could not find the material listed anywhere. 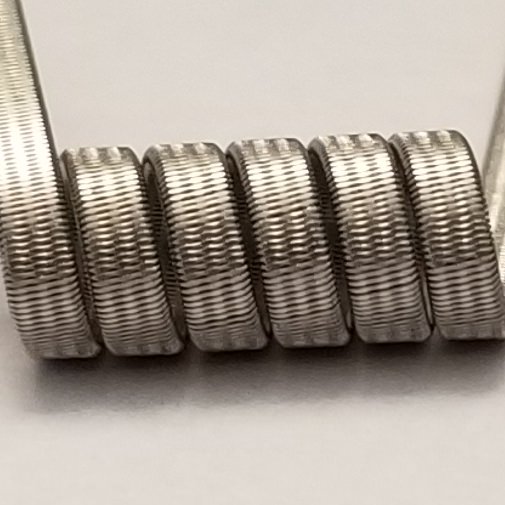 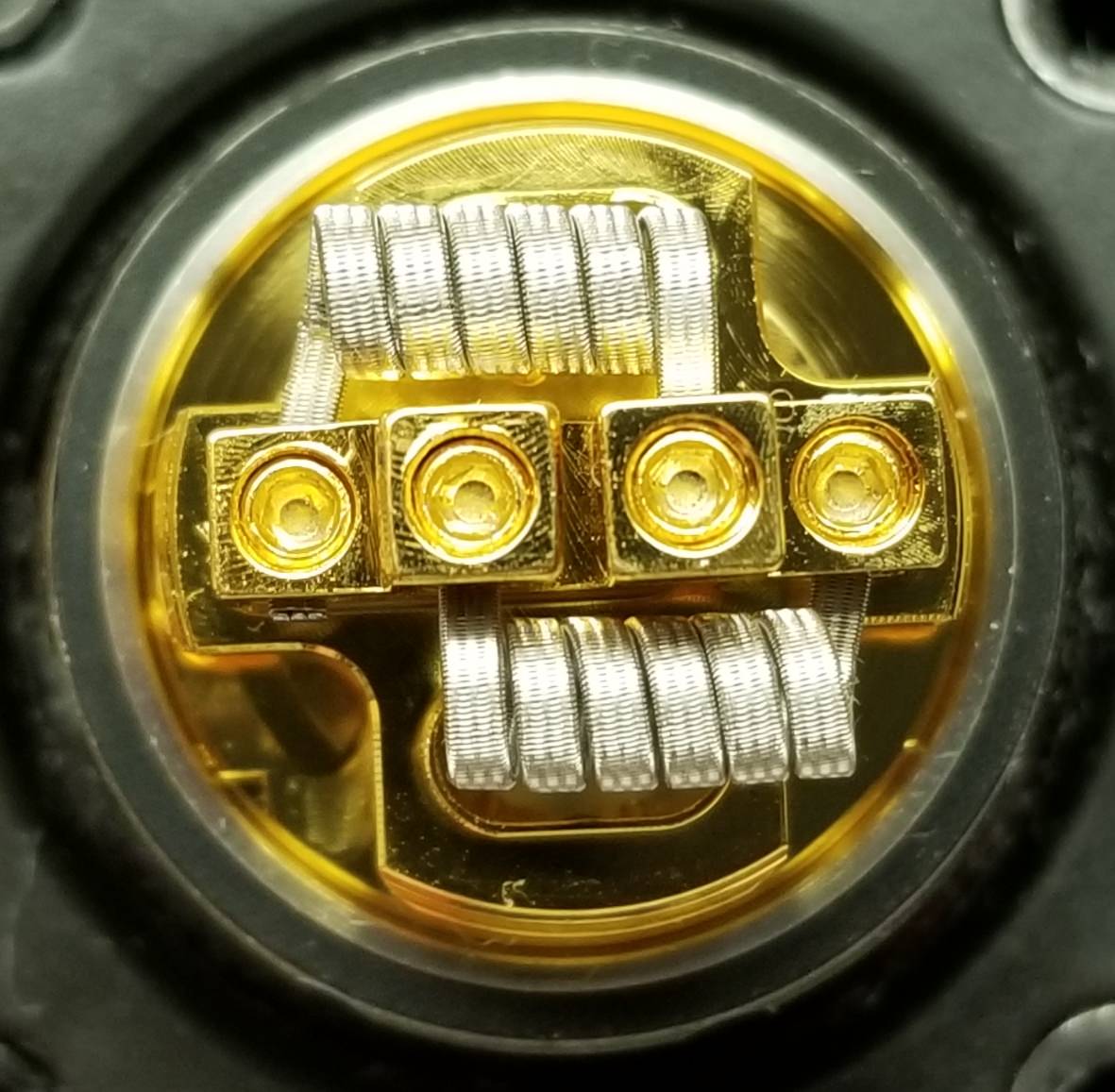 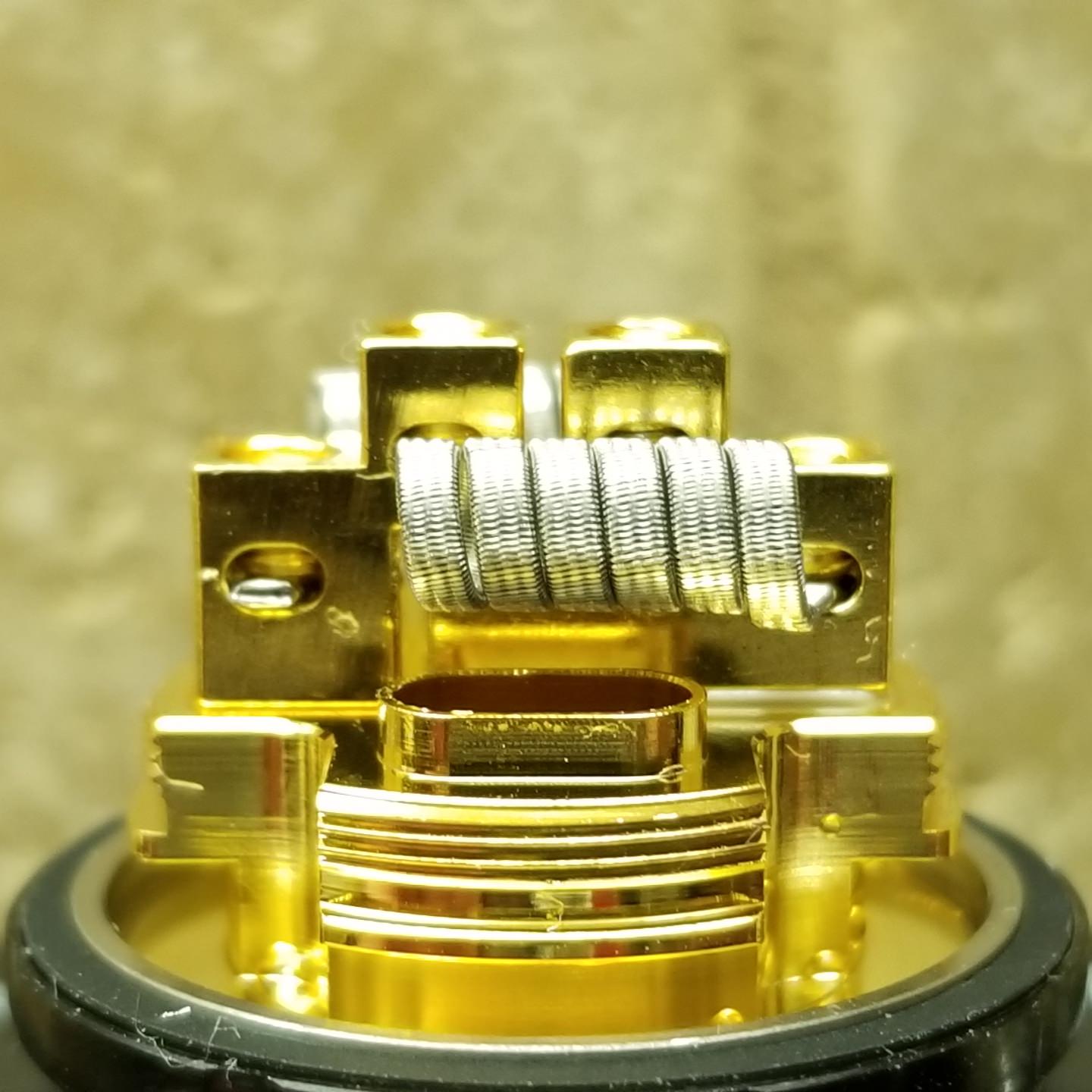 You will have to push your coils to the left to get them centered over the airflow. Not hard to do, just make sure you leave some room away from the posts.

Didn’t have any problems using 26g wire as well which can sometimes be a pain to trap your leads with decks made for wide builds. 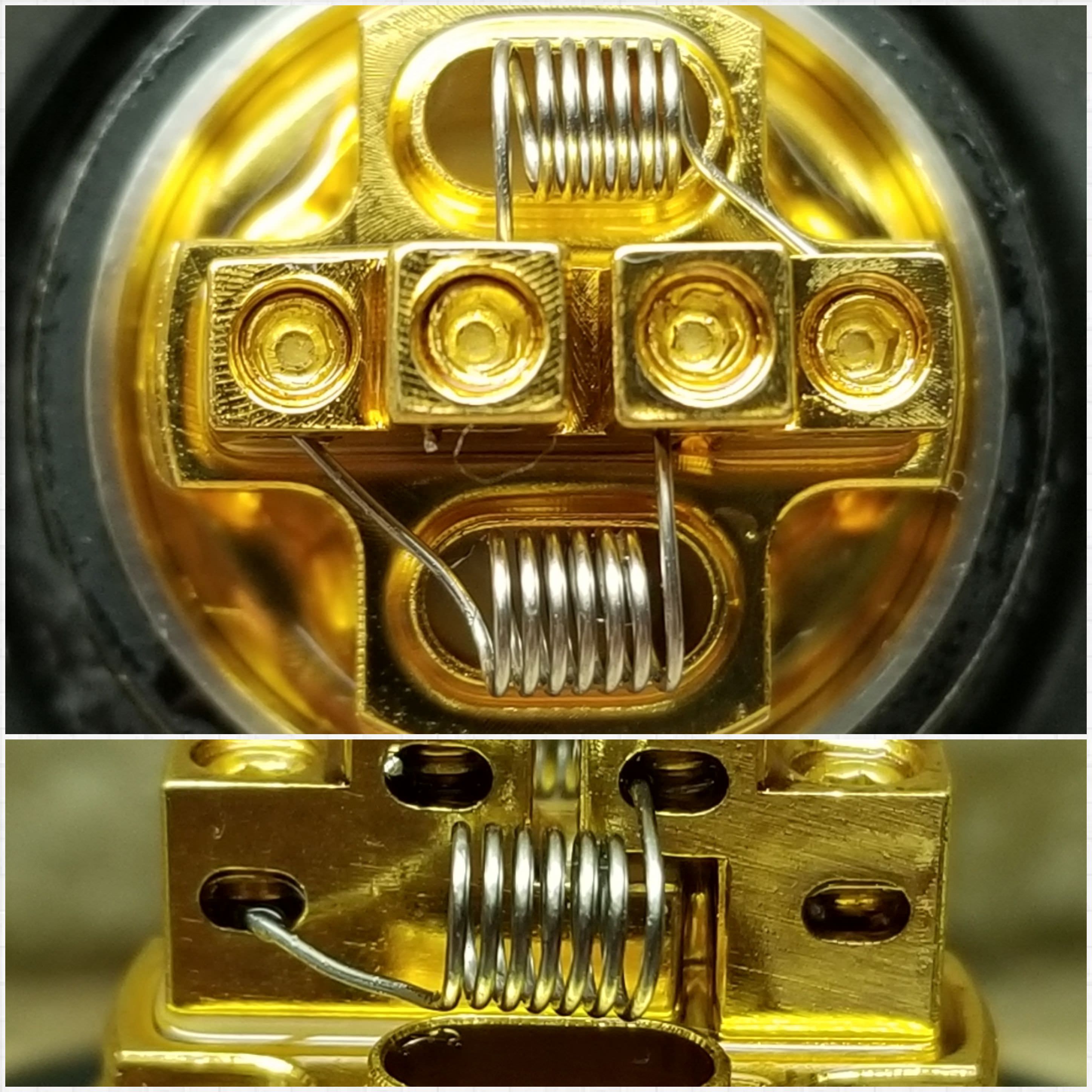 I wound up using more wick than usual due to the big openings. You do have to wet your wicks and tuck them in to avoid getting caught up in the threading. Also be careful when checking your build, happened to me once that the wick got caught up in the threads and caused a leak. Only happened once in about 6 to 8 builds but it is something to be aware of. 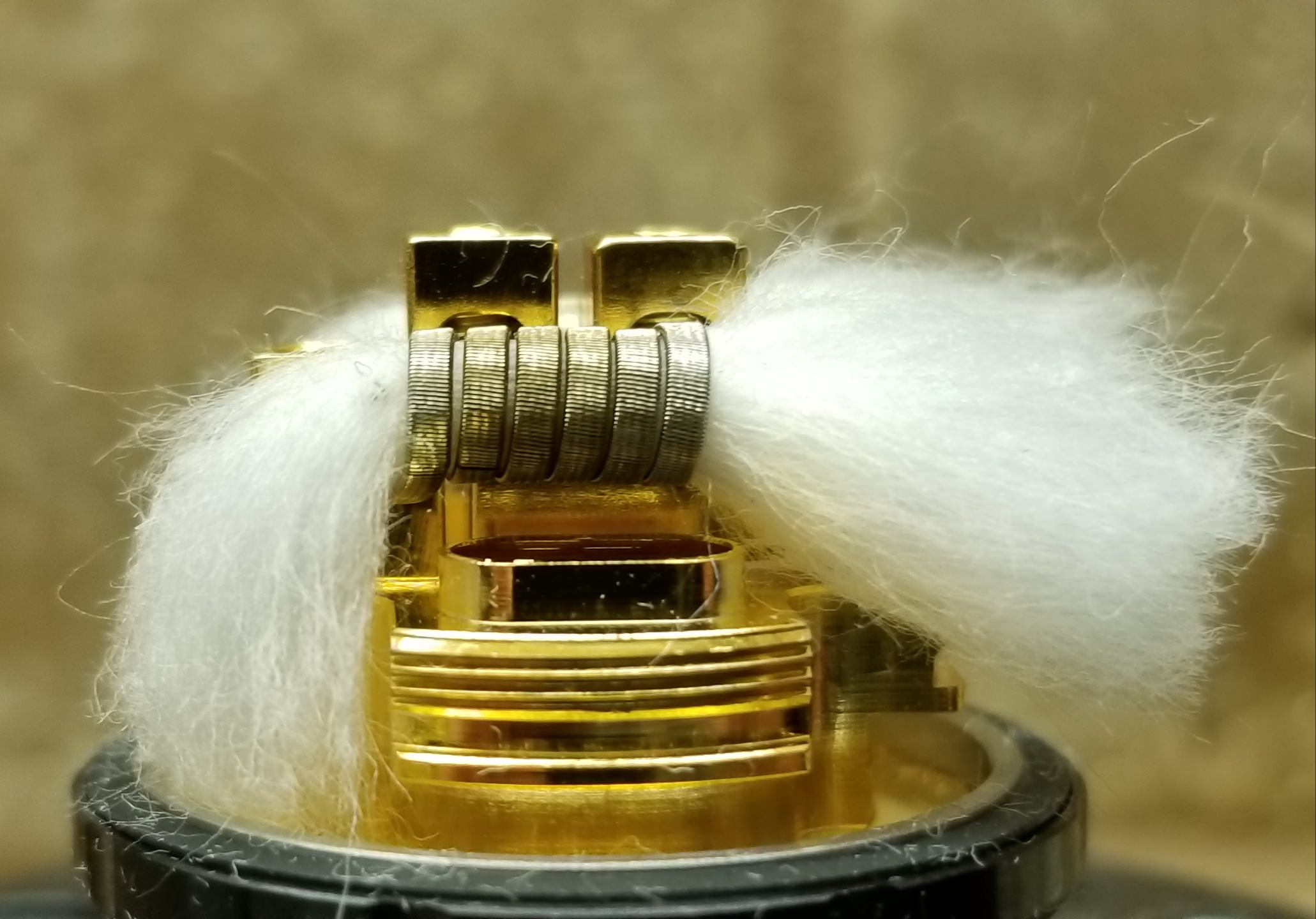 I like to chain vape, sometimes 4 to 6 long 4 second rips at 80 to 100 watts. I was really thinking I would run into dry hits near the end with the amount of wick I used but nope, the wicking kept up like a champ.

Great grub screws on the Billow X as well and they are holding up like champs, always appreciate that.

I tried a lot of different builds and the Billow X kept delivering, my least favorite being the single 26g dual coil build shown above. It wasn’t bad by any means, just felt underpowered having such a small build in there.

Airflow is plentiful, I generally ran the airflow about 3/4 to halfway open, wide open offered hardly any resistance. Wide open airflow also decreased flavor some which is does with most tanks, about halfway was my preferred spot with most juices to get the most flavor.

I purchased the Advken Manta RTA and it arrived almost the same time as the Billow X. Since I already have a Vandy Vape Kensei I thought a comparison would be good. 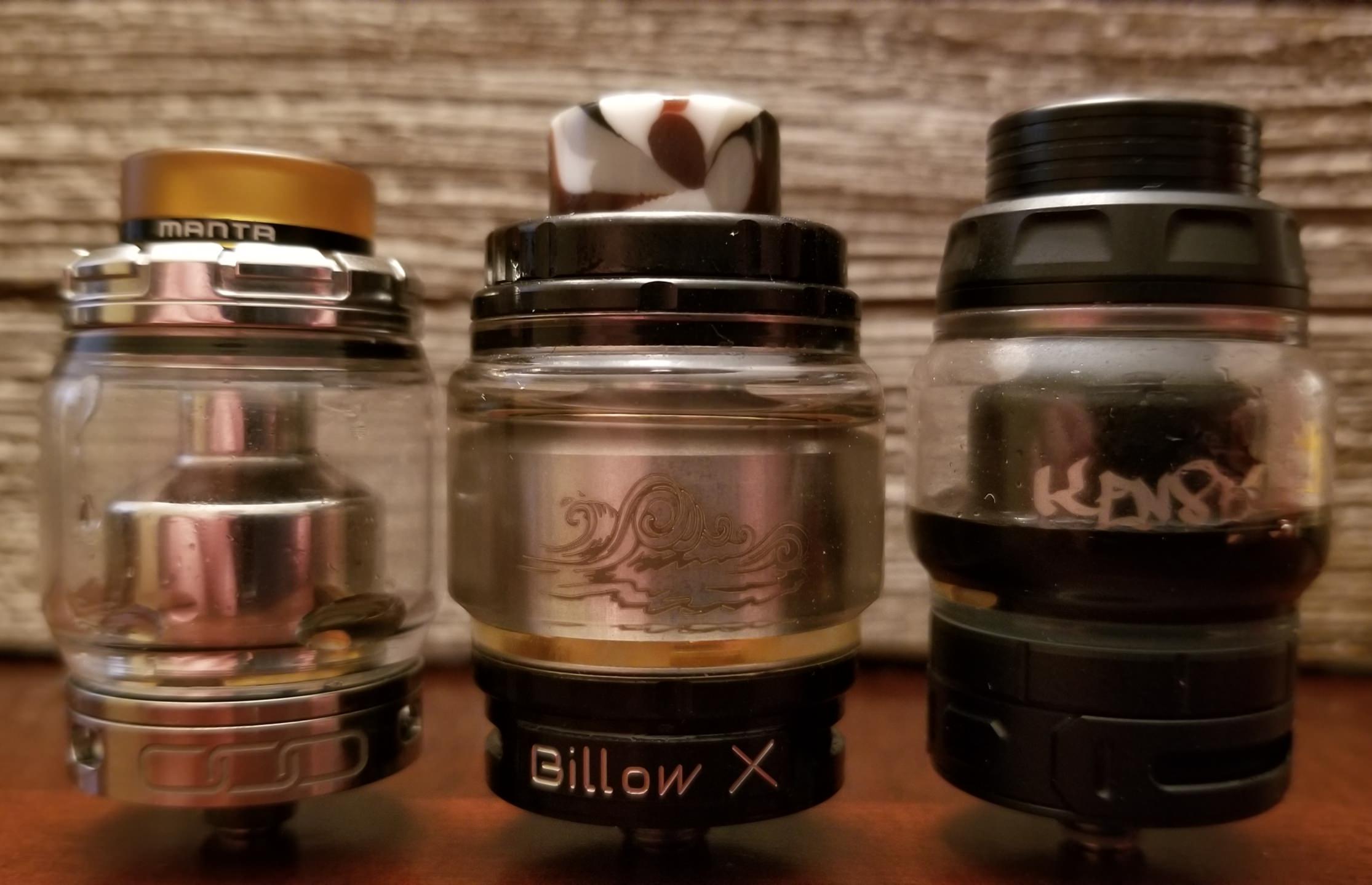 Same builds in all 3 tanks I loaded up the same juice and loaded them all on the same 3 mods so I could be as fair as possible.

Airflow on the Manta and Billow X is close wide open, a slight edge to the Manta there. The Kensei is noticeable tighter wide open, I had to close off the Billow X 3/4 to match the airflow of the Kensei. Matching the airflow on all 3 tanks the flavor was sooo close on all 3 with some juices, with other flavors the Manta had the slight edge with the Kensei and Billow X just about even. Cloud chucking honors go to the Billow X and Manta due to the increased airflow.

Building on all 3 tanks both the Billow X and Kensei have the edge as they are both top down screws, the Manta has side screws that will twist your leads with wide builds. 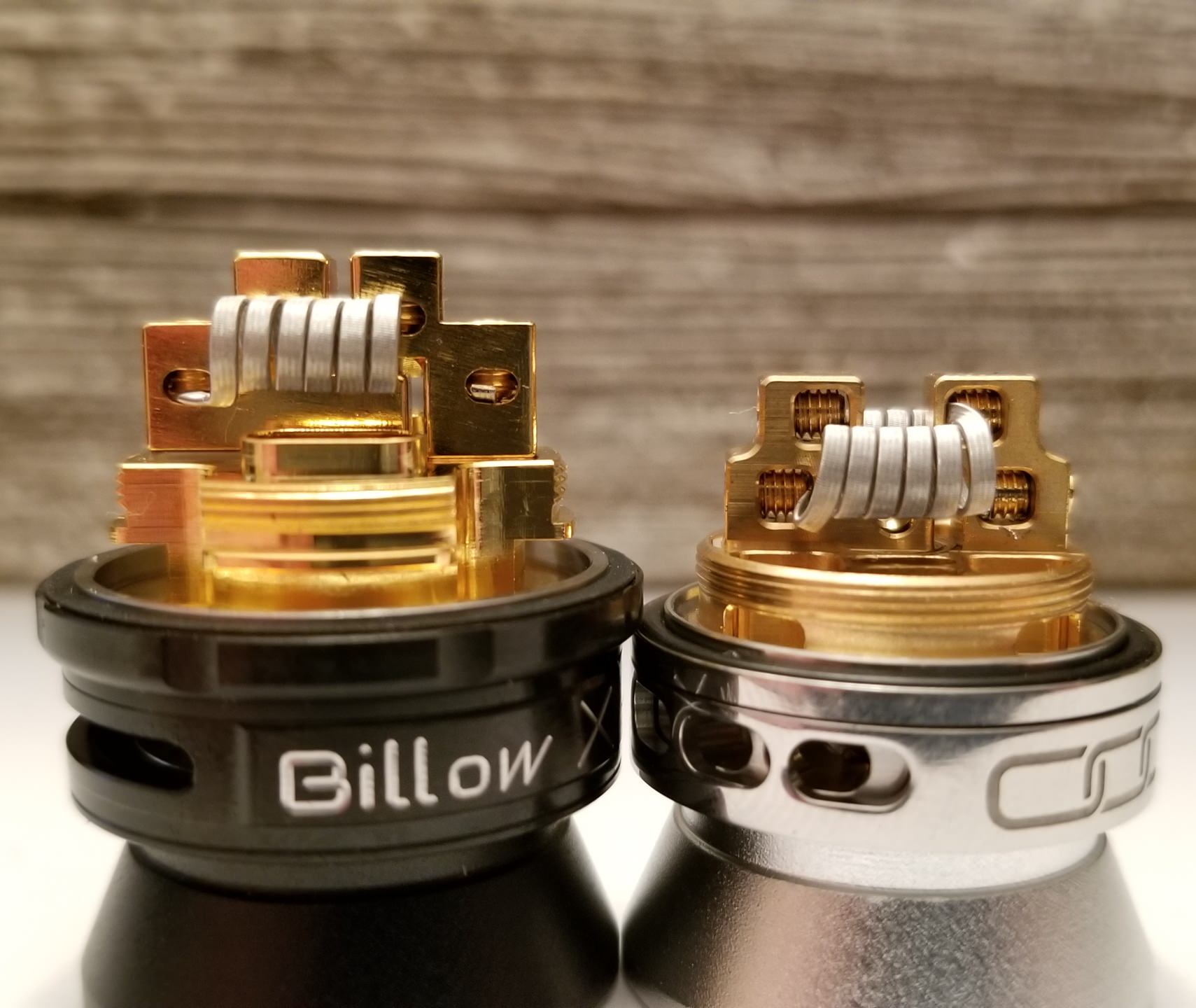 Wicking on the Manta is the easiest of all 3 tanks but none of them are particularly hard to wick, you just have to be careful to tuck your wicks with the Billow X.

I really like all 3 tanks but was surprised to find my least favorite being the Kensei which is a tank I love. There is a flavor edge with the Manta and some juices but it is so close, I would say it is a coin flip for me between it and the Billow X. The Billow X does have more juice capacity with both the straight and bubble glass, 1/2 ml more with the straight and 1ml with the bubble glass. The Billow X is easier to build on with wide builds as well over the Manta, I like wicking the Manta more though. If someone held a gun to my head and made me choose it would be the Billow X for the ease of build and juice capacity but I would be happy with any of these tanks.

I am sitting here thinking…..are those the only cons I have? Racking my brain trying to think of more things to complain about but coming up empty. Oh wait, I did chip the 4ml straight glass when removing the Billow X from a mod and since there is no replacement I am stuck with the bubble glass….damnit, I liked using the 4ml glass better. I guess that is not really a con as most tanks with straight and bubble glass only come with 1 each, just sucks for me.

I am not going to sit here and say the Billow X is my favorite RTA, my favorites happen to be 30mm. In the 25mm range of RTA’s the Billow X is a great choice though and it will stay in my line up for sure. If you’re a Billow fan then the new X won’t disappoint as long as you want an airier tank than the V3. I like it a lot better than the Billow V3 for my style of vaping, it is a big upgrade for me.

I want to thank Christina at www.heavengifts.com for sending me the Ehpro Billow X to review. It is always a bonus when you get something you will continue to use after the review is over. They have it in stock in SS at the moment but should have the other colors soon: https://www.heavengifts.com/product/Ehpro-Billow-X-RTA.html

I also want to thank Ehpro, they have been killing it lately with great products that I have been really enjoying.