Hello once again and thank you for taking the time to view my review of the Lost Vape Therion BF DNA75C Squonker Mod which was provided by my friends at www.healthcabin.net . They are currently having a 10% of sale (except Clearance) from Feb. 10 – 25 2018 Coupon Code: CNY2018 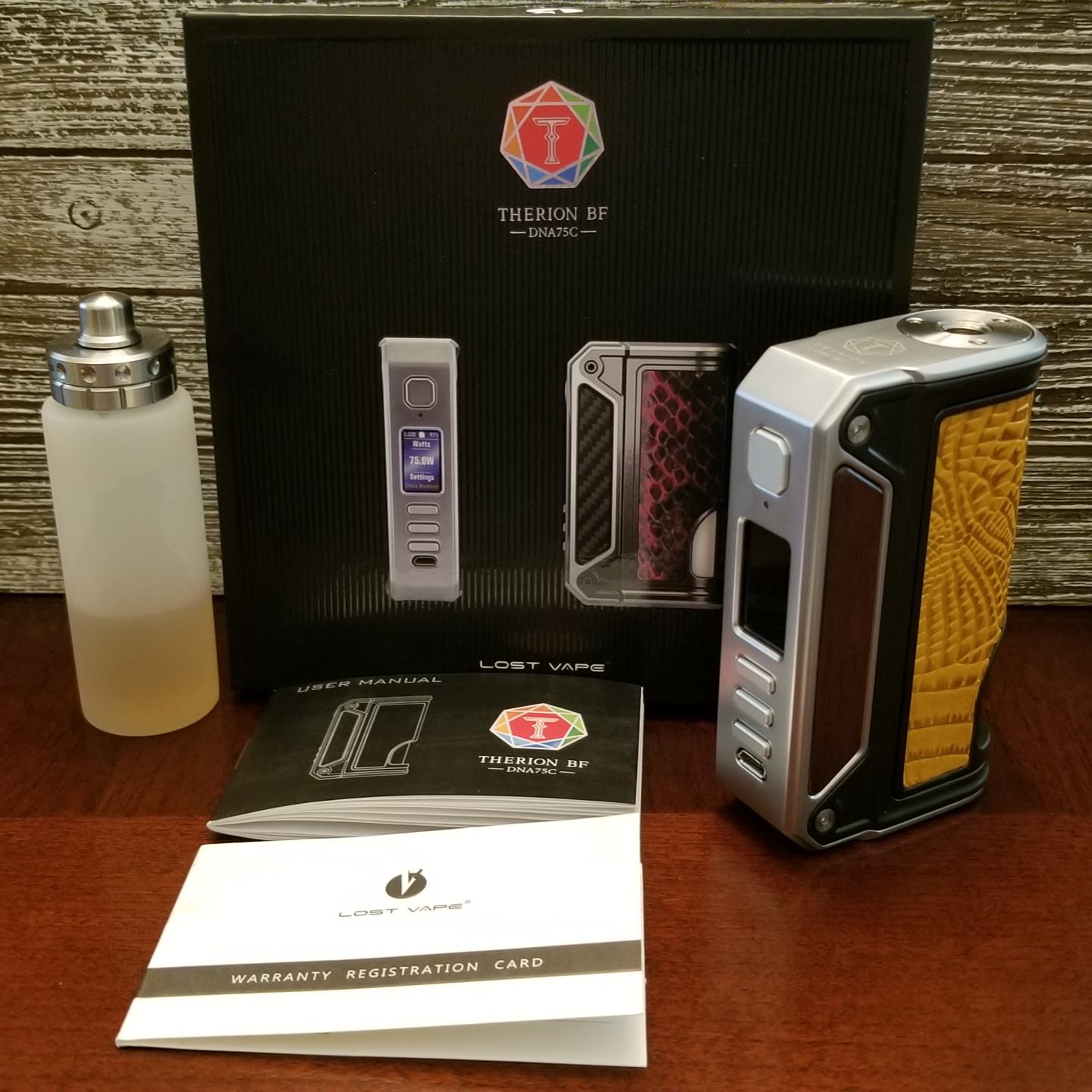 Available in Black and Silver and a variety of leathers, not all colors shown below.

Getting to know the Therion

The Therion in its various configurations is well know, no doubt about that. First available with the DNA75 chip it has had several versions after that. This is there first BF or Bottom Feeder version and it utilizes the latest DNA75C chip which offers a color screen, ability to make changes via the mod instead of having to plug it in via escribe and ups the voltage output to 9V, the previous DNA75 was only 6V. Unfortunately the efficiency of the board is still the same, only 85% which is a shame. 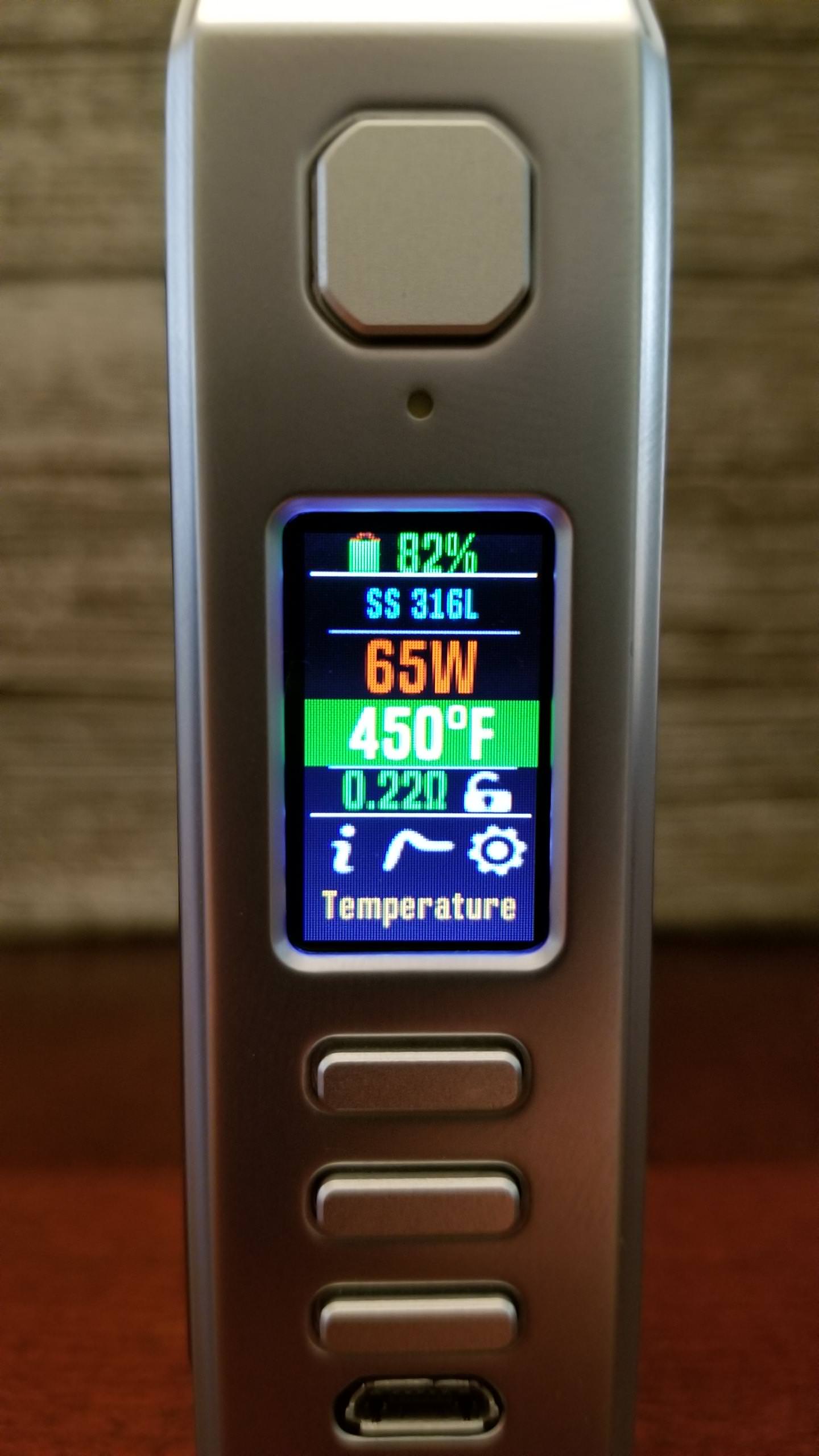 Now the DNA75C uses themes and Lost Vape had Daniel Djlsbvapes make a custom theme for the Therion BF DNA75C, when you open escribe, plug in the mod and click the Theme tab you will see this.

I love that they did this, it is set up wonderfully and I felt no need to make much changes at all. This is great for those that either do not know or don’t care to use escribe, it is setup great right out of the box, well done Lost Vape. About the only thing I made changes was to remove the Ni and Ti profiles as I never use those metals, change my battery profile and also remove the Auto lock when idle.

Getting the battery in is a pain, there is reverse battery protection via a ring around the positive end that just makes it tough to get you battery in and out. You also have to take care to not rip your battery wrap. 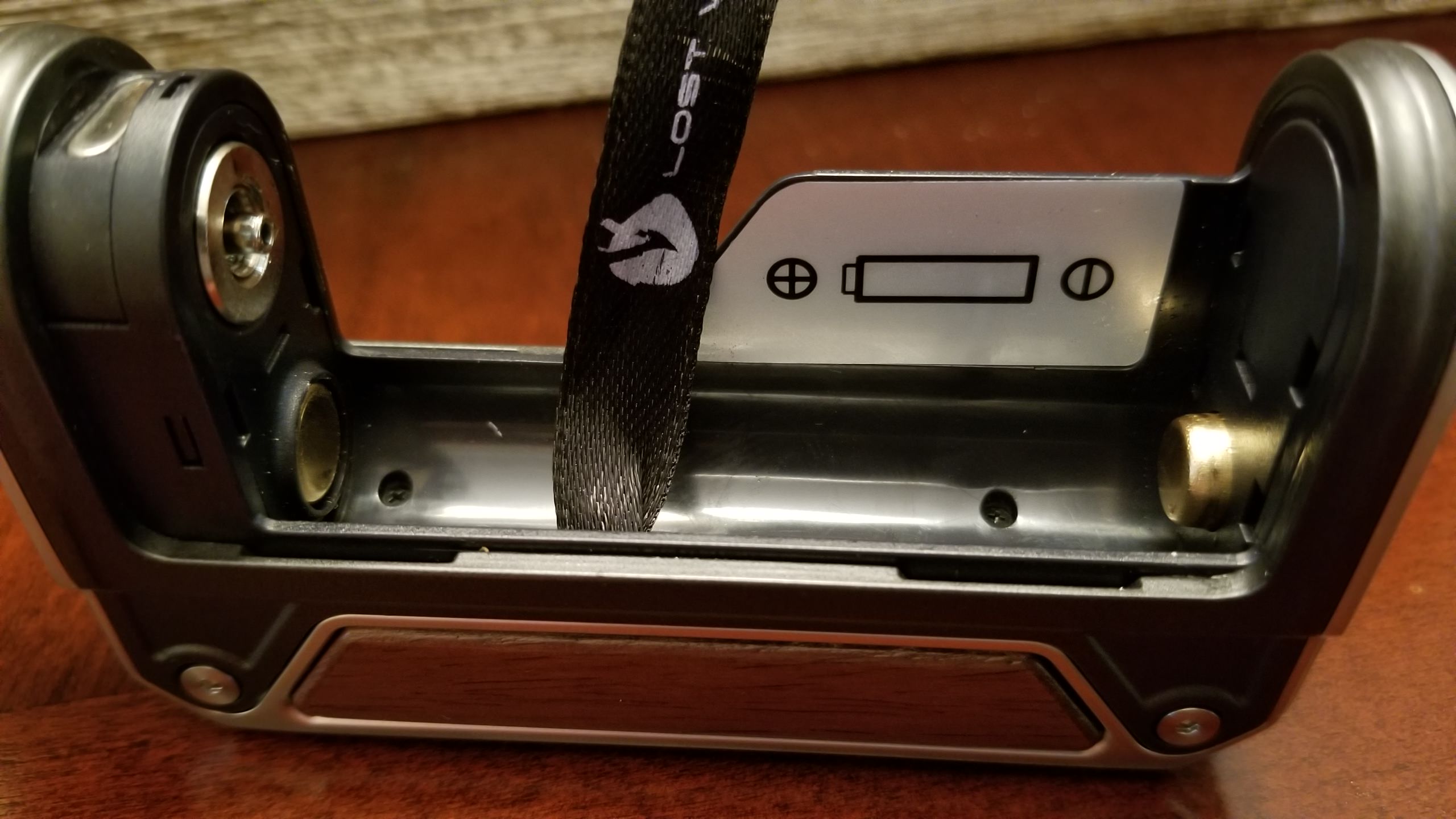 Once your battery is in there is a plastic piece that is installed to go between the battery and squonk bottle. 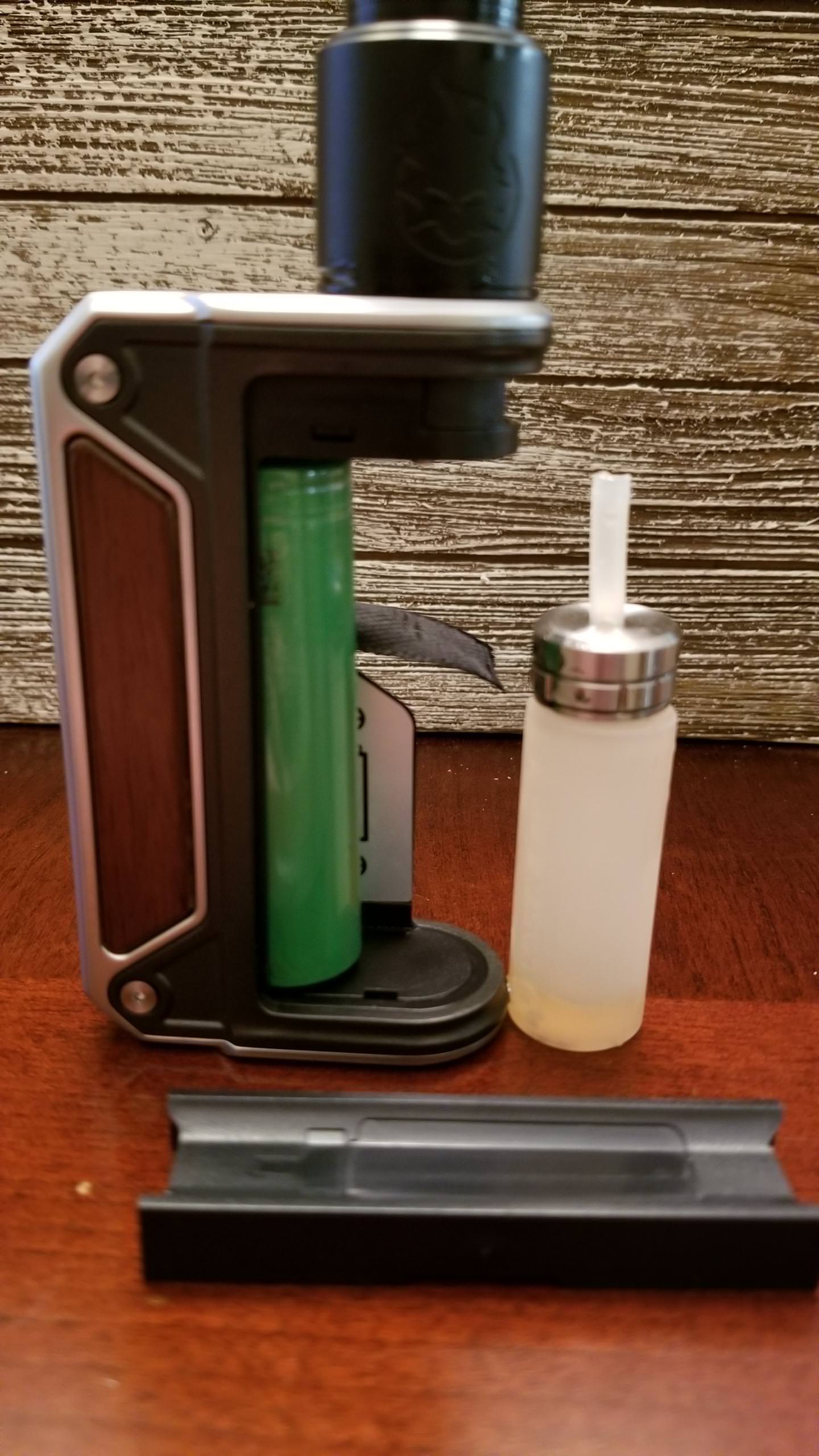 Then just reinstall the bottle which is easy enough. 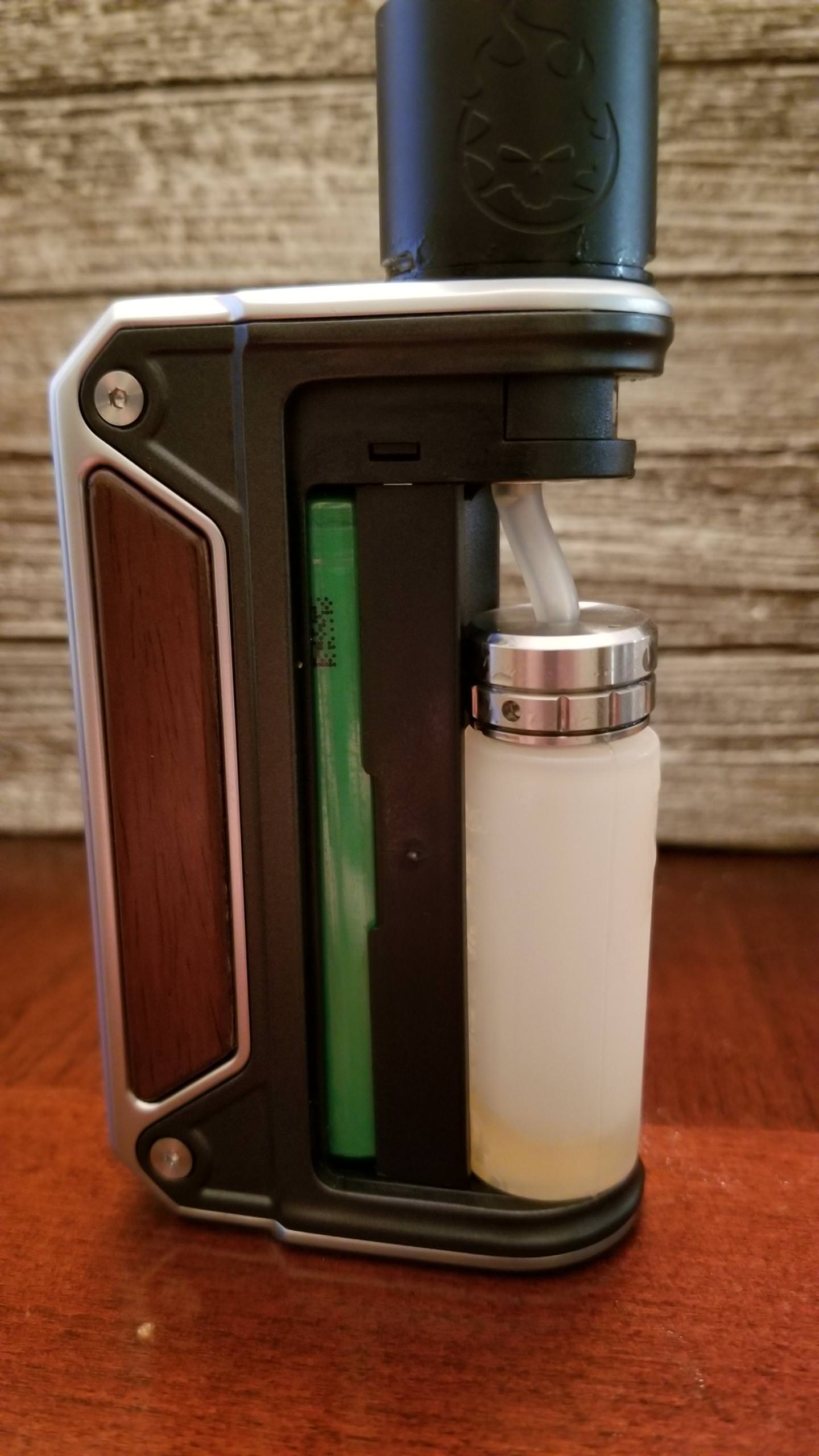 They also include a 30ml refill bottle which comes in really handy. There is a process to refilling which they cover well in the owner’s manual.

There is a hole and notch that when under normal use you would have them separated like this: 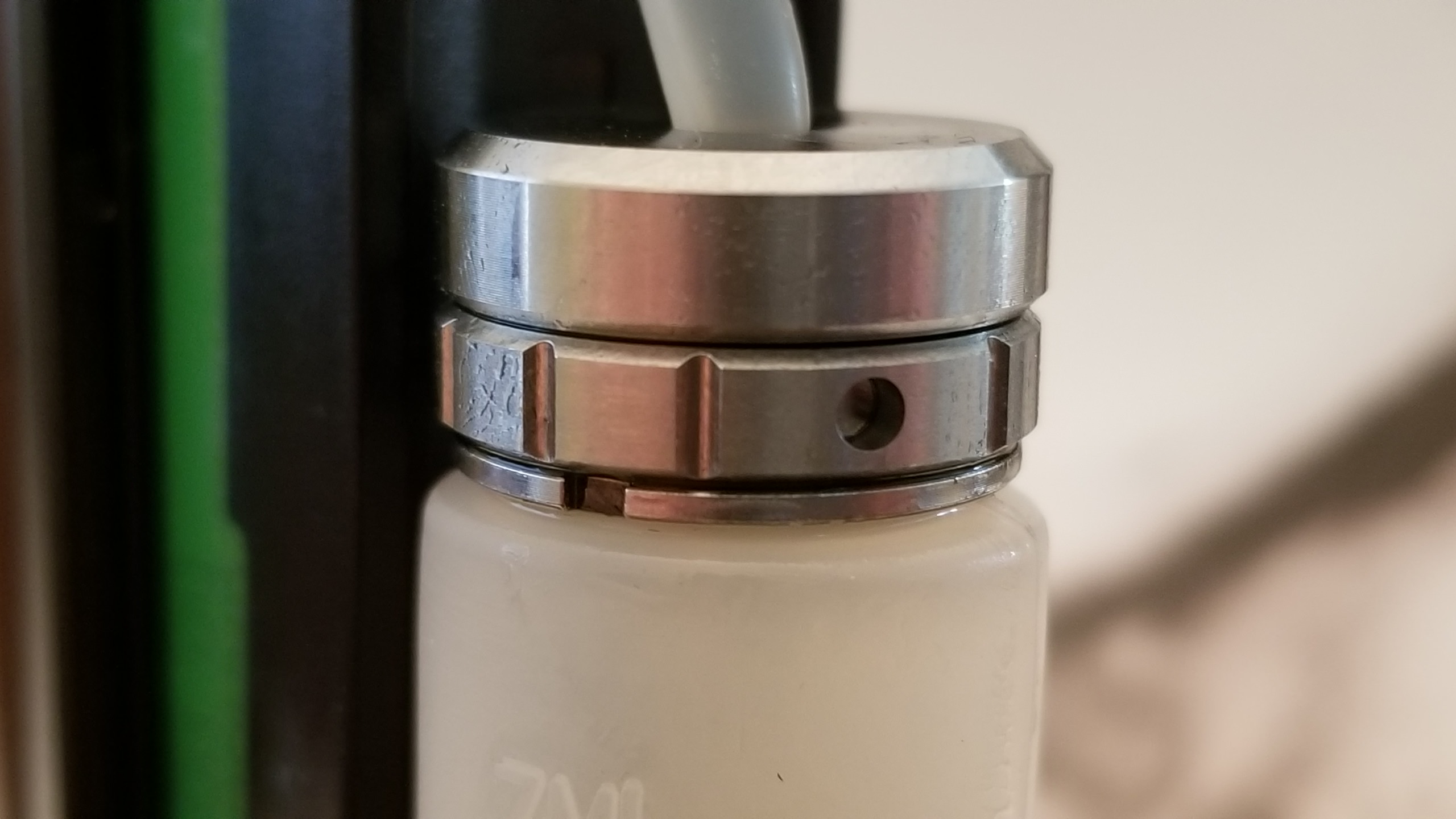 When it comes time to refill just line up the hole and notch so that there is air to escape when refilling, it would look like this. 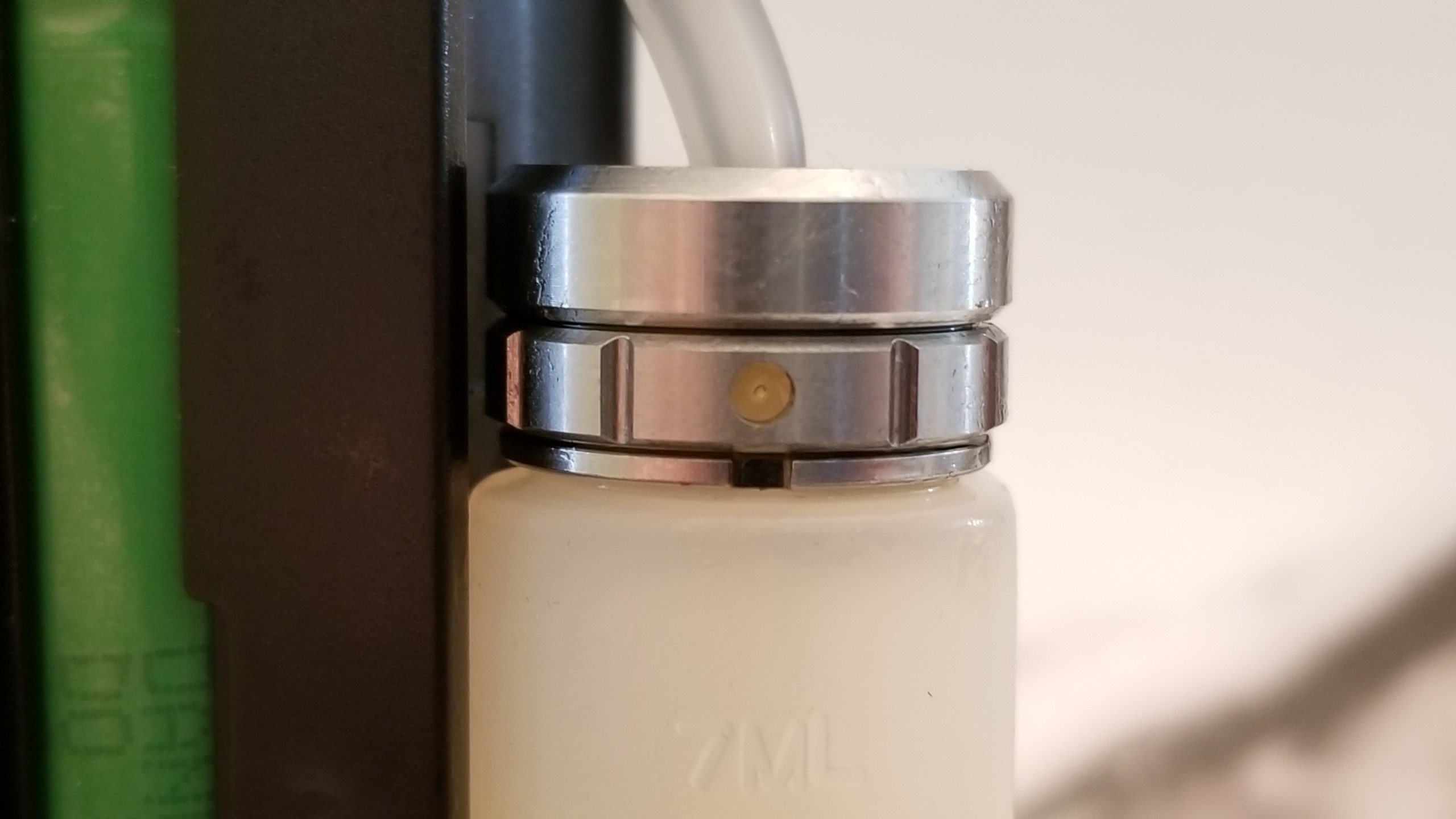 Then you just unscrew the 510 cap on the refill bottle and thread it on the Therions 510 and squeeze away. 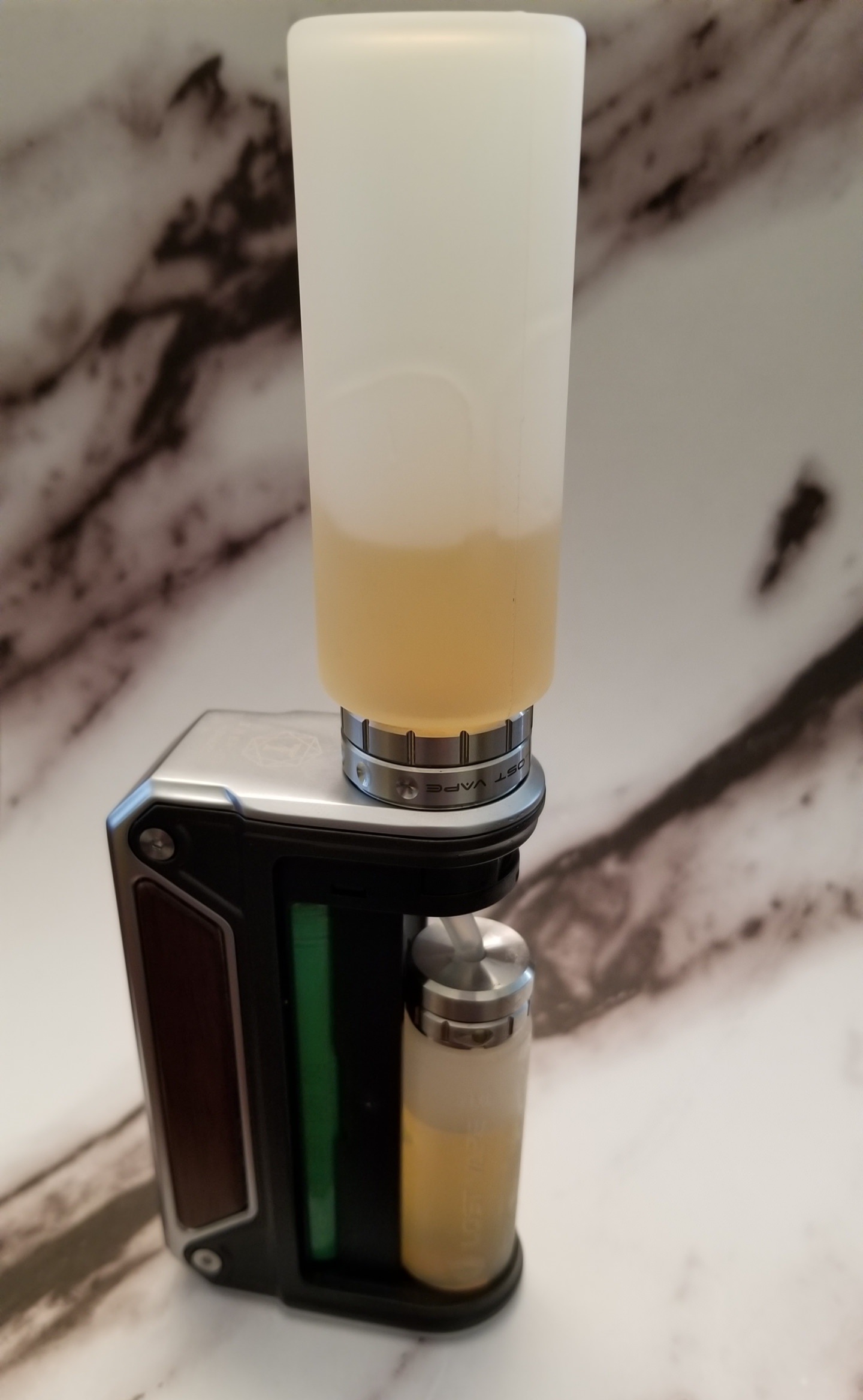 Just make sure that once you are done you turn the hole away from the notch on the squonk bottle again, if not then air and juice will escape from that hole.

It is not hard to just remove the bottle and refill it that way but the refill bottle is a really nice touch and works great.

If you have never held a Therion in your hand the fit and finish is just beautiful. Lost Vape has stepped up there game with the finish on my silver, far and away better than my Lost Vape Triade which starts to chip paint just by looking at it. In a months use I have not gotten a single chip and the alligator leather is holding up just fine. Buttons are nice and clicky and not rattle whatsoever, just a really solid mod and well worth the price they are asking.

It is a beautiful mod for sure and the battery covers can be purchased separately, here is the original I got in Yellow Crocodile with the QP Design Kali 25mm RDA on top. 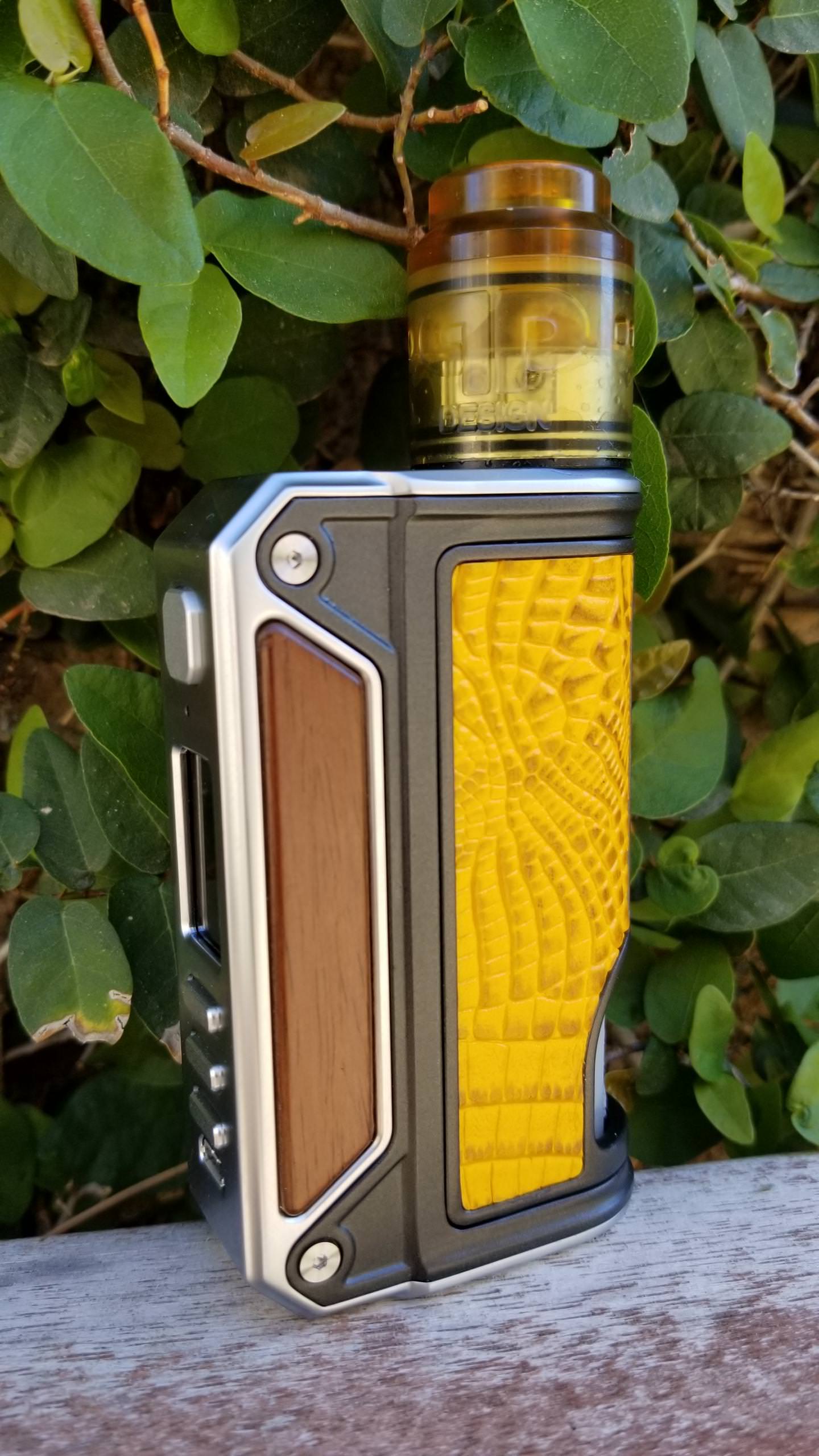 And here it is with the Crown Bull battery cover I found at a local vape shop with the Vandy Vape Maze 24mm RDA. 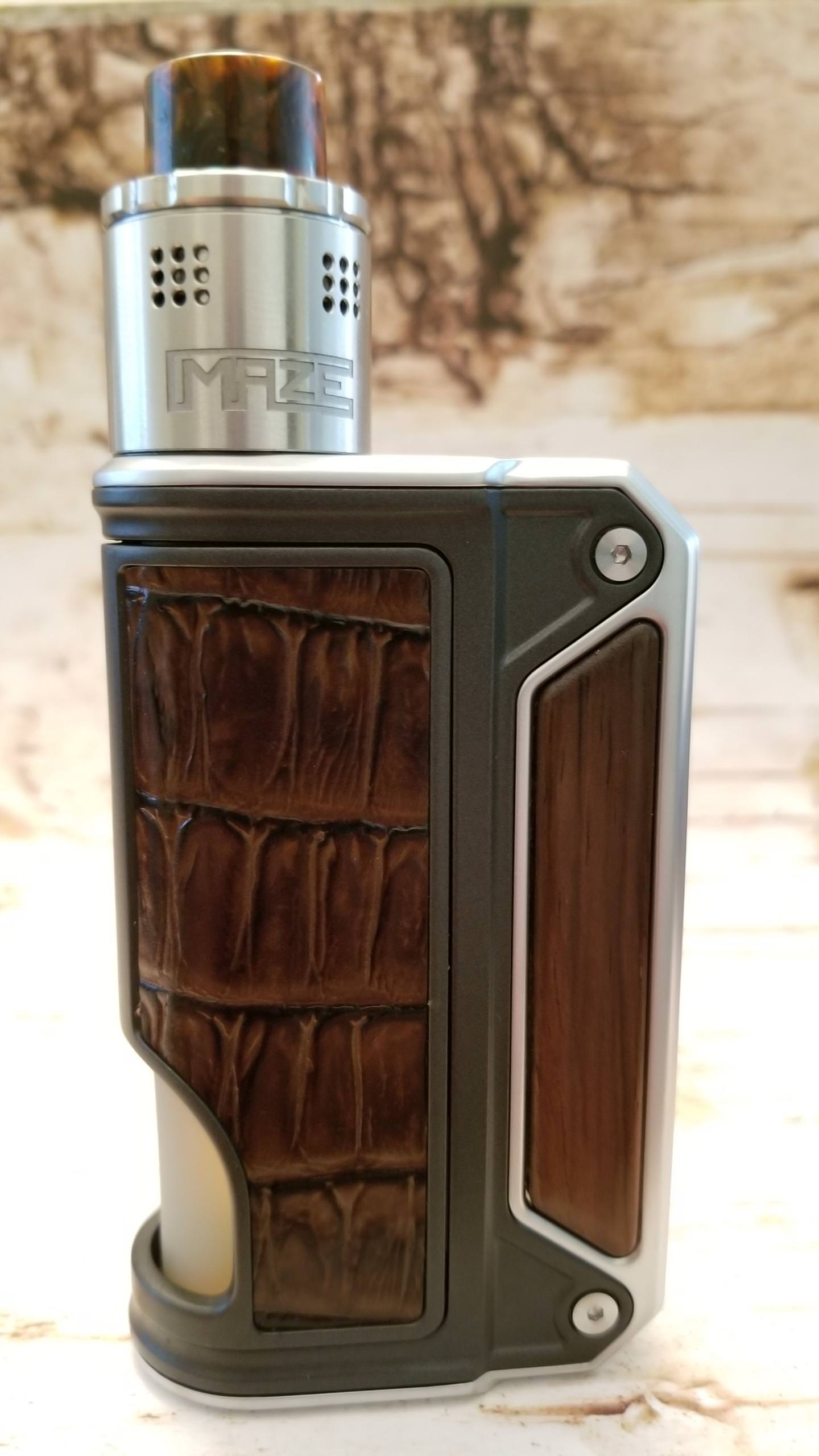 24mm tanks look the best on the Therion but as you can see above 25mm tanks looks good as well, just a bit of overhang on the bevel, not the mod itself.

I don’t have a 28mm RDA but I tried on the 28mm Triple so I can show you what it would look like. 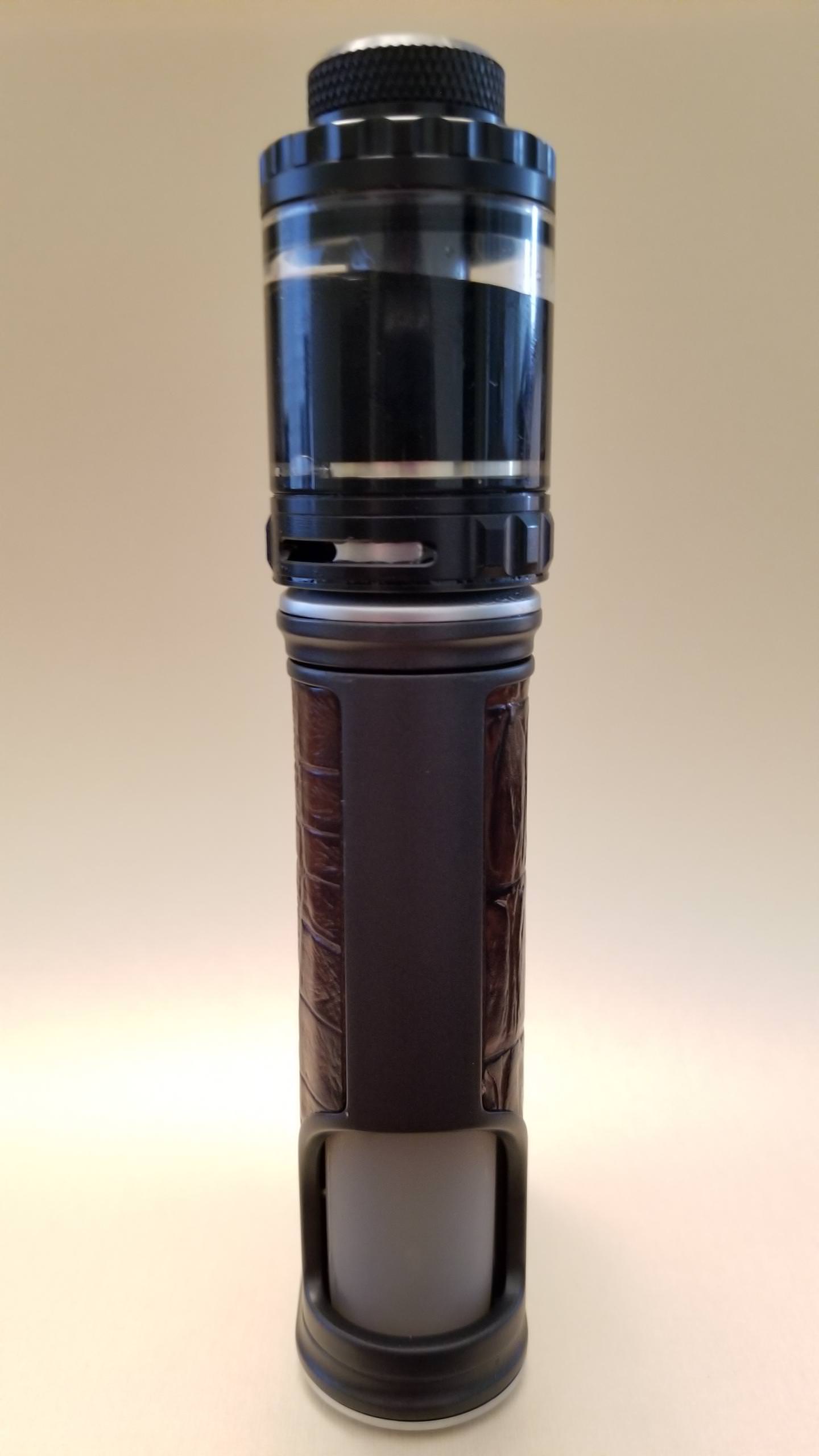 I am not going to dive down to deep here, it is a DNA board which has proven time and time again to be one of, if not the top board in the market. I will mainly speak to its out of the box performance which has been excellent seeing as they had DJLsb Vapes write a custom version for it. For those of you who don’t know he is a technical reviewer on youtube who knows his stuff.

Having owned 3 previous DNA75 mods, 2 of which I sold due to lack of use, the new DNA75C is a worthy upgrade. I was never a big fan of the original DNA75 and if you bought one that was not set up like the Hcigar VT75 then you had to get into escribe to get the most out of it. Sure you could get outstanding TC performance if you knew what you were doing with escribe with the DNA75. With the way the Therion DNA75C chip it setup you get excellent performance right out of the box, this is the way all DNA mods should be setup.

I love the added mode button of the DNA75C, makes it so you can make changes directly on the mod, no need to plug into your PC or Mac to make routine changes like preheat. You also don’t need to remember all the different button combinations to change temp, power, mode and materials, that was a pain prior to the DNA75C, really makes me look forward to the DNA250C which should be releasing soon.

SS316L TC performance has been outstanding, Daniel did a great job there. Even if you don’t like it you can always go into escribe and make changes but for me there was no need.

Power performance is what you would expect from a DNA mod, it is just solid, not much more needs to be said.

As far as squonking, it just works really well with the soft silicone bottle and removing and replacing the bottle is a snap. A little bit of juice was present in the case but that may have been from my mistake of forgetting to the move the hole from the notch after refilling, I forgot a couple of times….whatcha gonna do?

Every tank I had worked fine with the exception of the Wotofo Nudge 24 I reviewed a little while back. The Nudge worked on all my other mods but would not connect to the Therion for some odd reason. It was baffling, would not connect with the squonk pin or non squonk pin installed, I just got the “No Atomizer” screen when I went to fire. Even the new Nudge 22 worked, just not the Nudge 24 but it does have a shorter than normal 510.

Keeping in mind this is a single 18650 mod it is good, not great and that has a lot to do with the 85% efficiency of the board. This is not a mod you want running full bore at 75 watts unless you love swapping batteries all day. I could go nearly all day with a single coil at 0.60 ohms, this was my favorite setup vaping in TC. I am running a dual coil at 0.16 ohms at the moment and it fires it fine but there will be at least 3 to 4 battery swaps in a day.

I have already mentioned it but it should be said again, swapping batteries in this thing just sucks. One time a battery was really in there, the battery ribbon would not get it to budge. I had to use ceramic tweezers to finally wiggle it out. I normally don’t recommend charging via the USB but this does have balanced 1 amp charging and it is only a single cell. Now I just plug it in via USB instead of removing the cover, removing the bottle, taking off the cover and wrestling with the battery to get it out. You have to be careful of the protruding squonk pin as well, if it is still connected to the bottom negative and you hit the squonk pin on the way out it will fire your atty, happened to me once.

Being my first DNA75C mod I was not sure what to expect, the original DNA75 mods I had were mostly disappointments to me. I have to say that the month I spent with the Lost Vape Therion BF DNA75C has been a great time and I have so enjoyed using it. It is definitely a mod I will continue to use and in a lot of ways I like it better than my Lost Vape Drone DNA166 BF mod. My Drone hasn’t seen a lot of use in the last month, that is how much I have been enjoying the Therion.

There are downsides though, installing and removing the battery just sucks, I hate doing it so much that I usually charge via USB. You have to build higher for better battery life as well, I have really been enjoying it with a single coil in the 0.40 to 0.60 ohm range with excellent results.

All in all it is a beautiful well made mod with a lots of pros and little cons that can be overlooked for the performance it provides. If I was to lose this mod tomorrow in a freak fishing boat accident I would buy another in a heartbeat, I don’t say that often about any products.

I want to thank Maggie from www.healthcabin.net for sending me this to review, it will get a lot of use from here on out. They are having a 2018 Chinese Spring Festival Sales with 10% off using Coupon Code: CNY2018 and the Lost Vape Therion BF DNA75C Squonker Mod can be found here in a lot of different colors and options: https://www.healthcabin.net/lost-vape-therion-bf-dna75c-squonker-mod-kit-p/15866.html Hurry though, the sale ends February 25th 2018. They carry the spare bottles as well, great for quick flavor swaps.
Make sure and check out there clearance section too, great deals for sure: https://www.healthcabin.net/clearance/

Pics with other toppers: 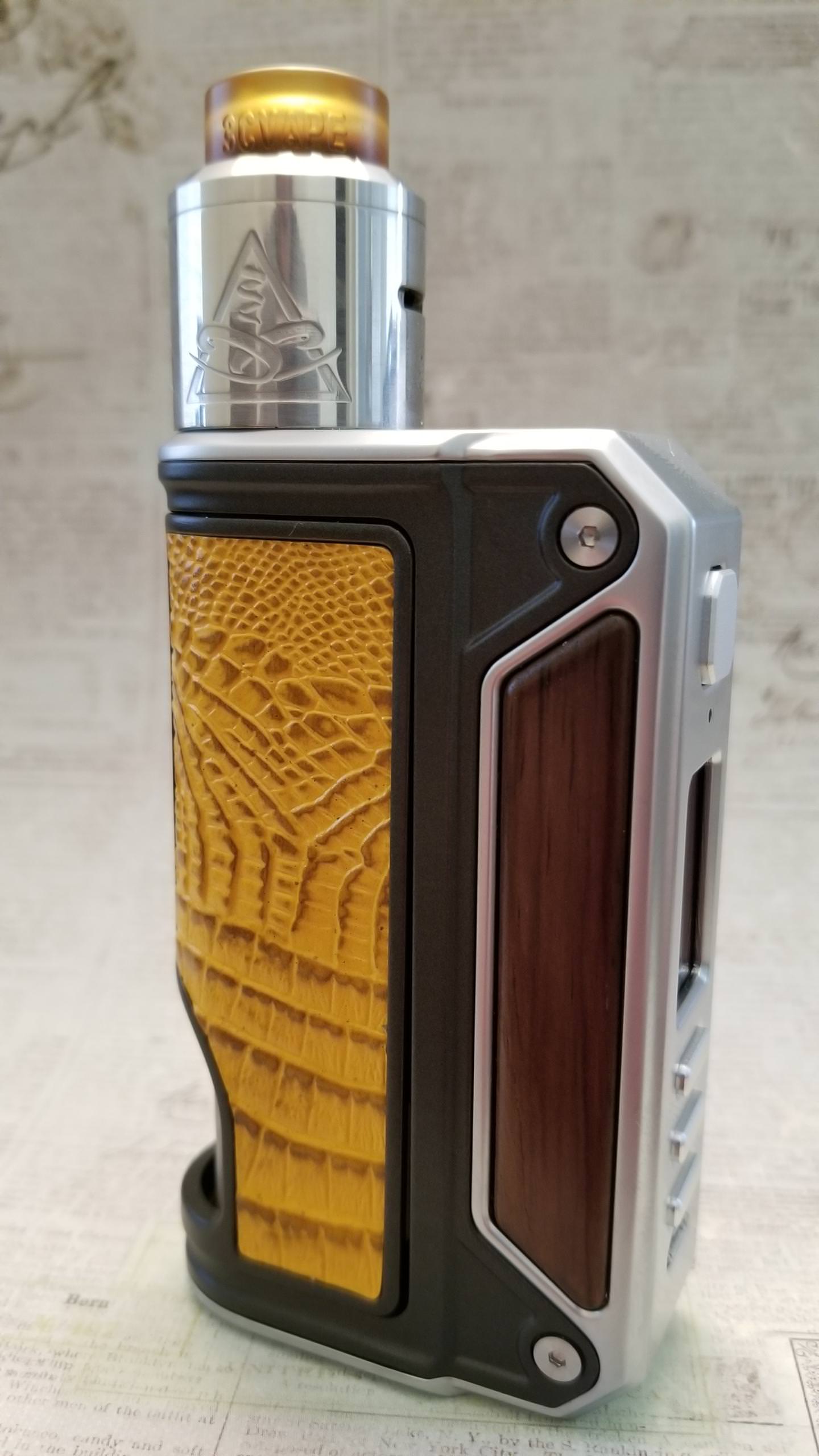 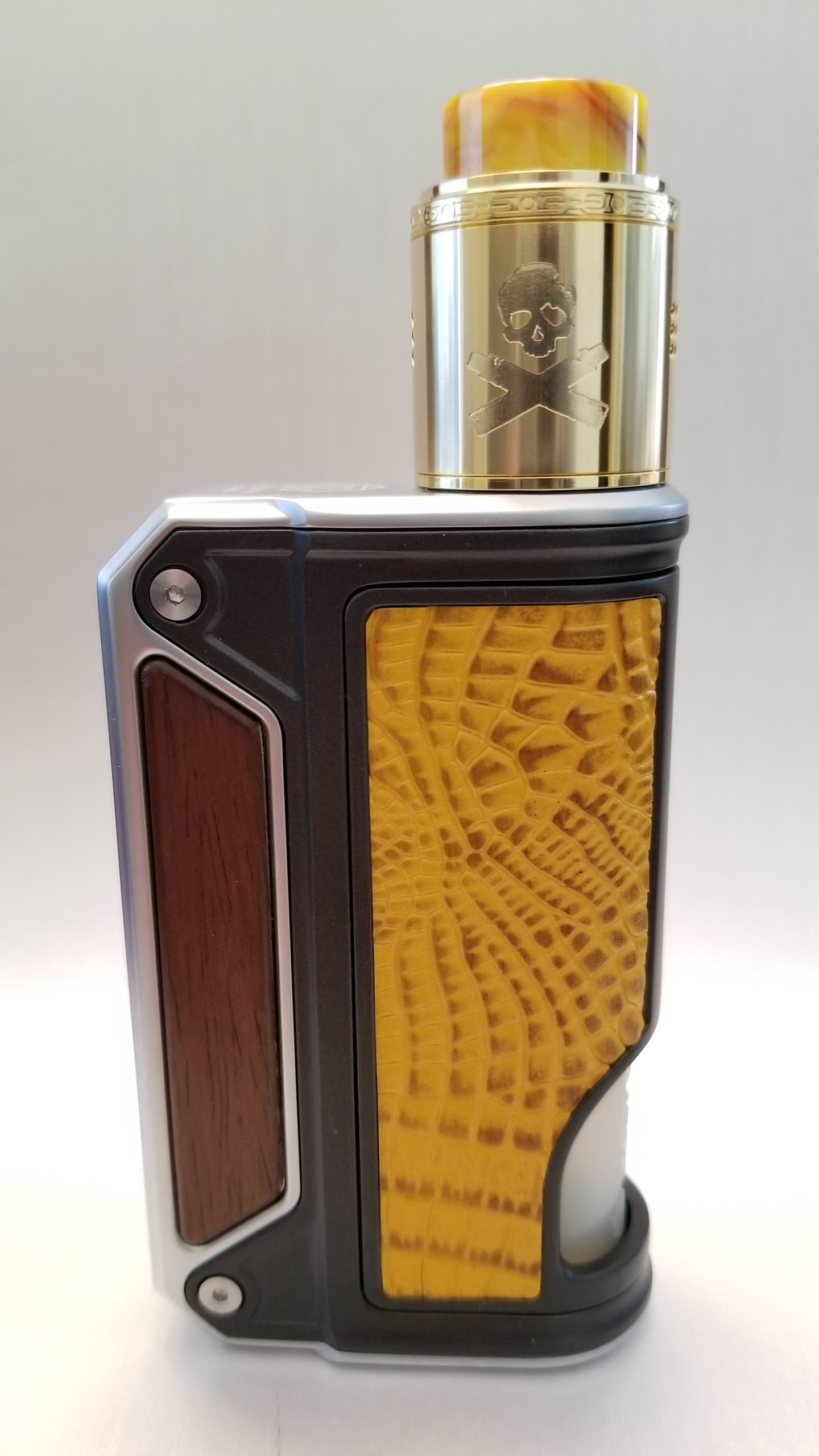 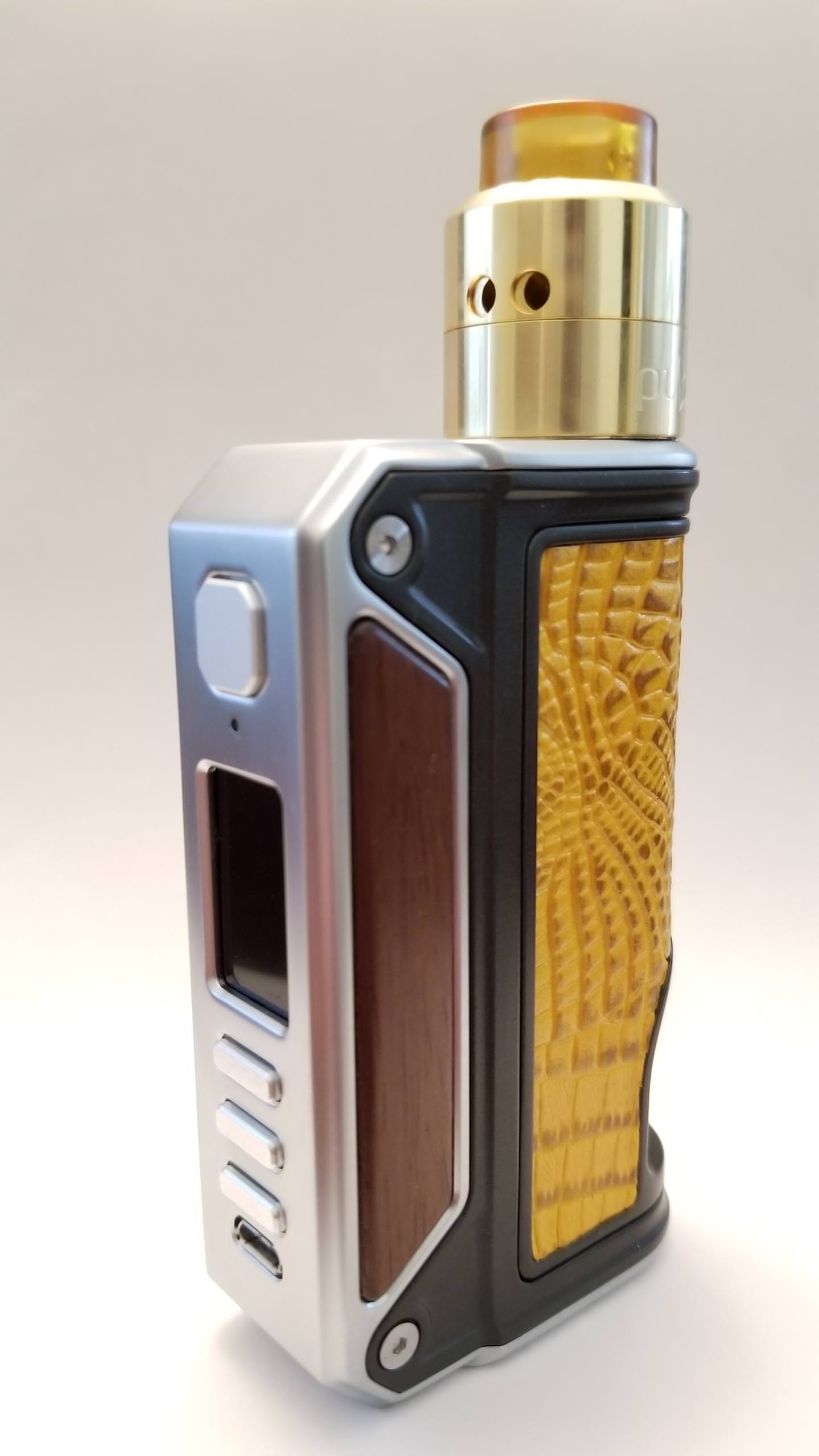 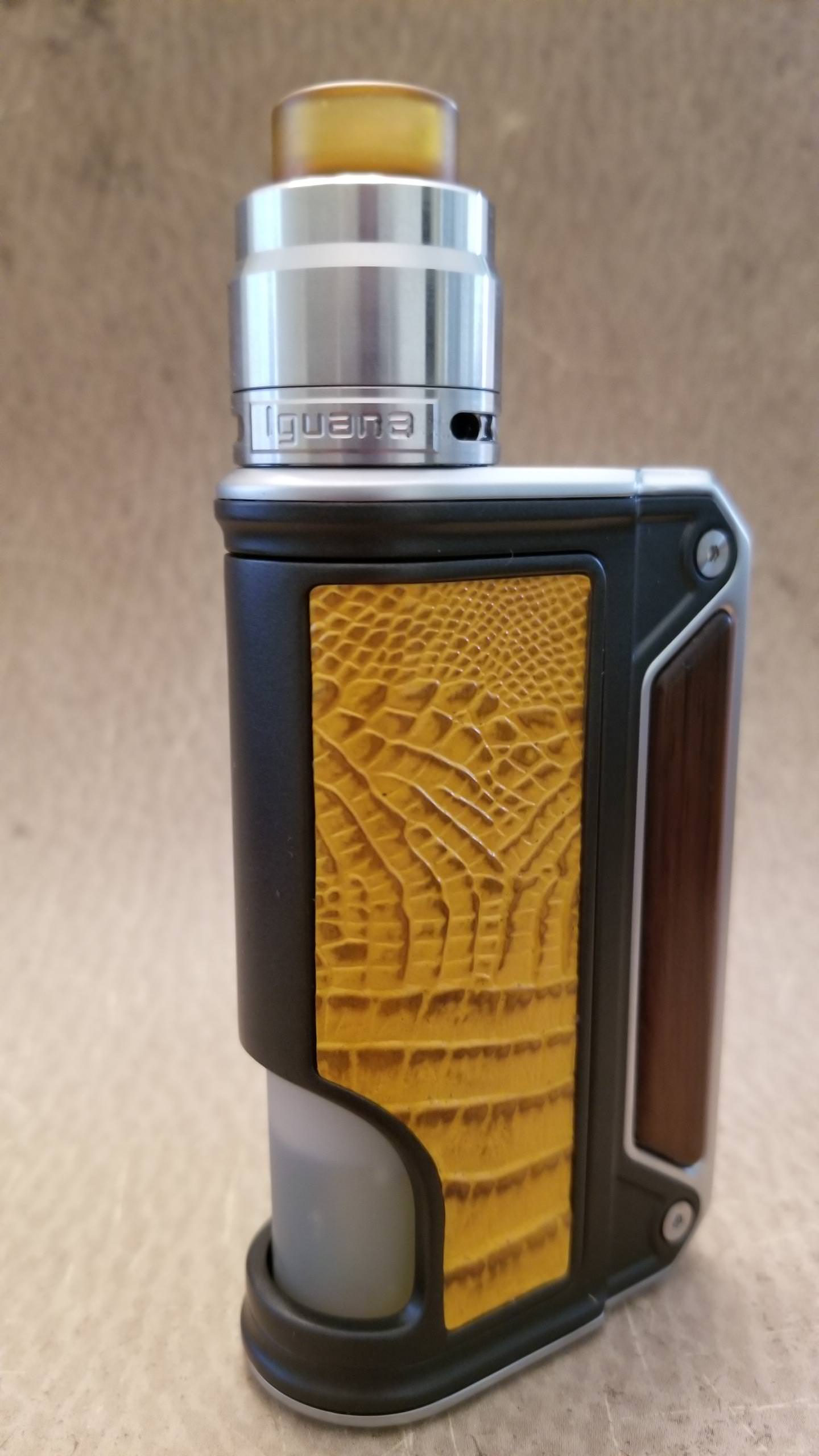