I received this from…..not sure exactly who, it came to me as a surprise in the same package as the Artery PAL AIO (review coming soon) so I am going to assume it is the same company, Artery and Ehpro? Ehpro does have a website that happens to be down as I write this though: www.szehpro.com but they have an active instagram: https://www.instagram.com/ehproofficial/
Now if your like me and you go to google it the Ehpro Fusion 2-in-1 Kit will be the prominent links you get….This is NOT the 2-1, it is a standalone mod with only 1 power setting, not 2 like the 2-in-1 and it does not come with a tank.
Here is what I got 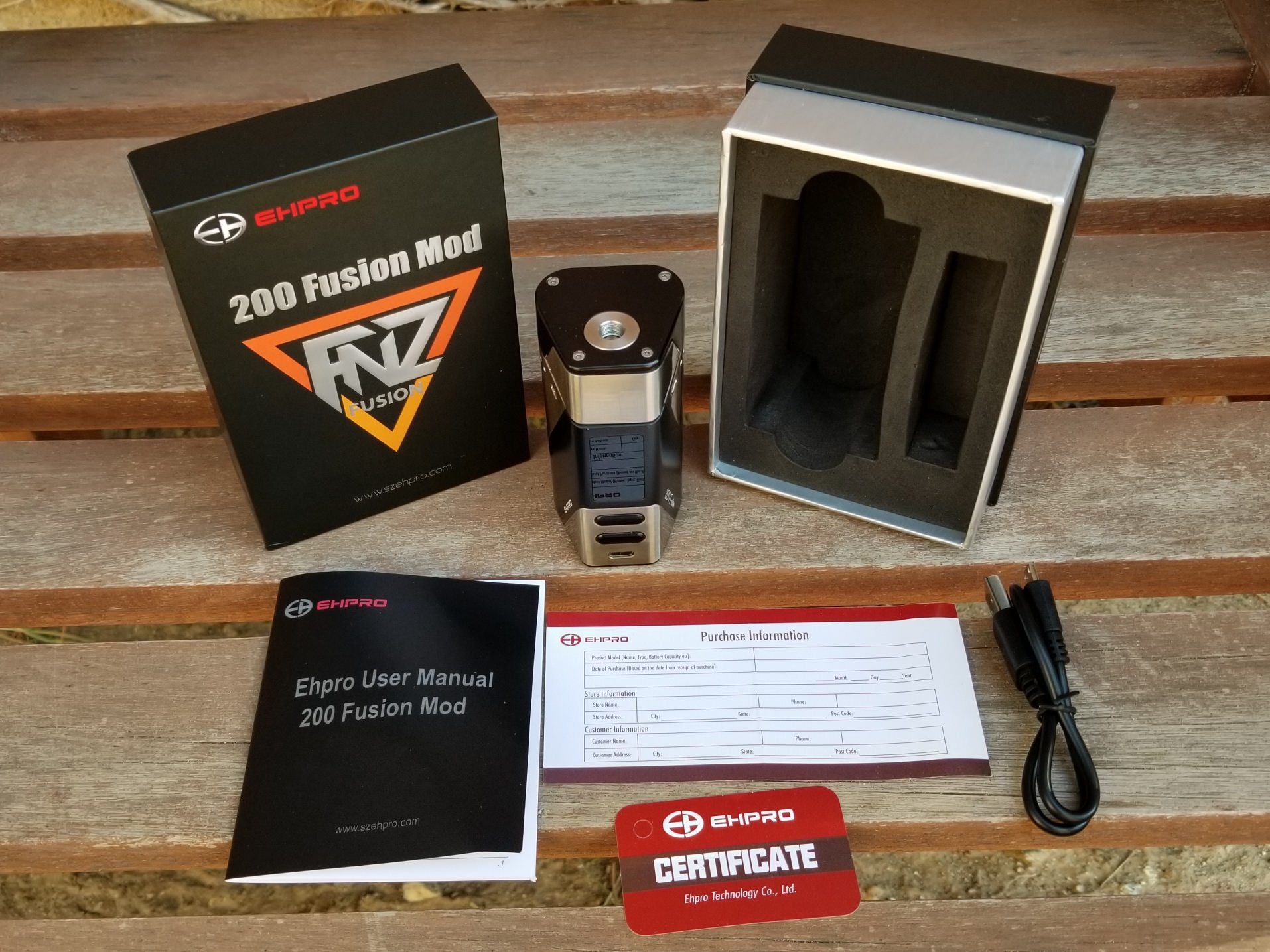 And the available colors I was able to find 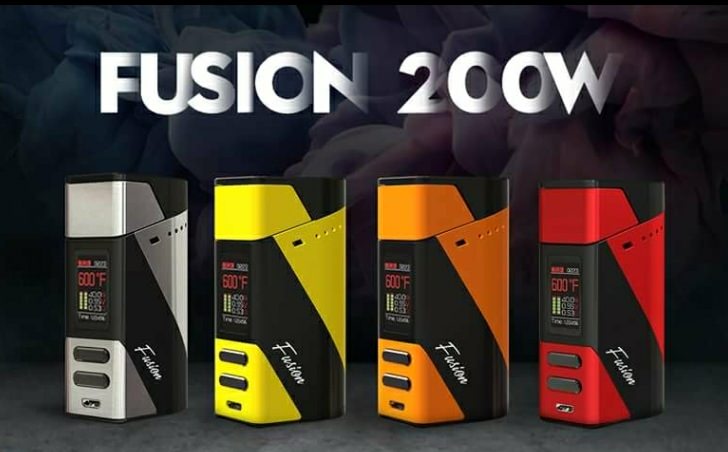 Specs:
First impressions
First thought when I got it was a bulkier Smoant Battlestar. Was a little meh on the looks at first, not the biggest scifi fan but it looked like a baby Cylon. I was thinking…hmmmm, I would like it better if it was all that really nice brushed stainless steel, it is probably a coated zinc alloy but they sure did a nice job.
Luckily I got the SS Drop RDA from Digiflavor that made me go ohhhhh, matchy matchy. 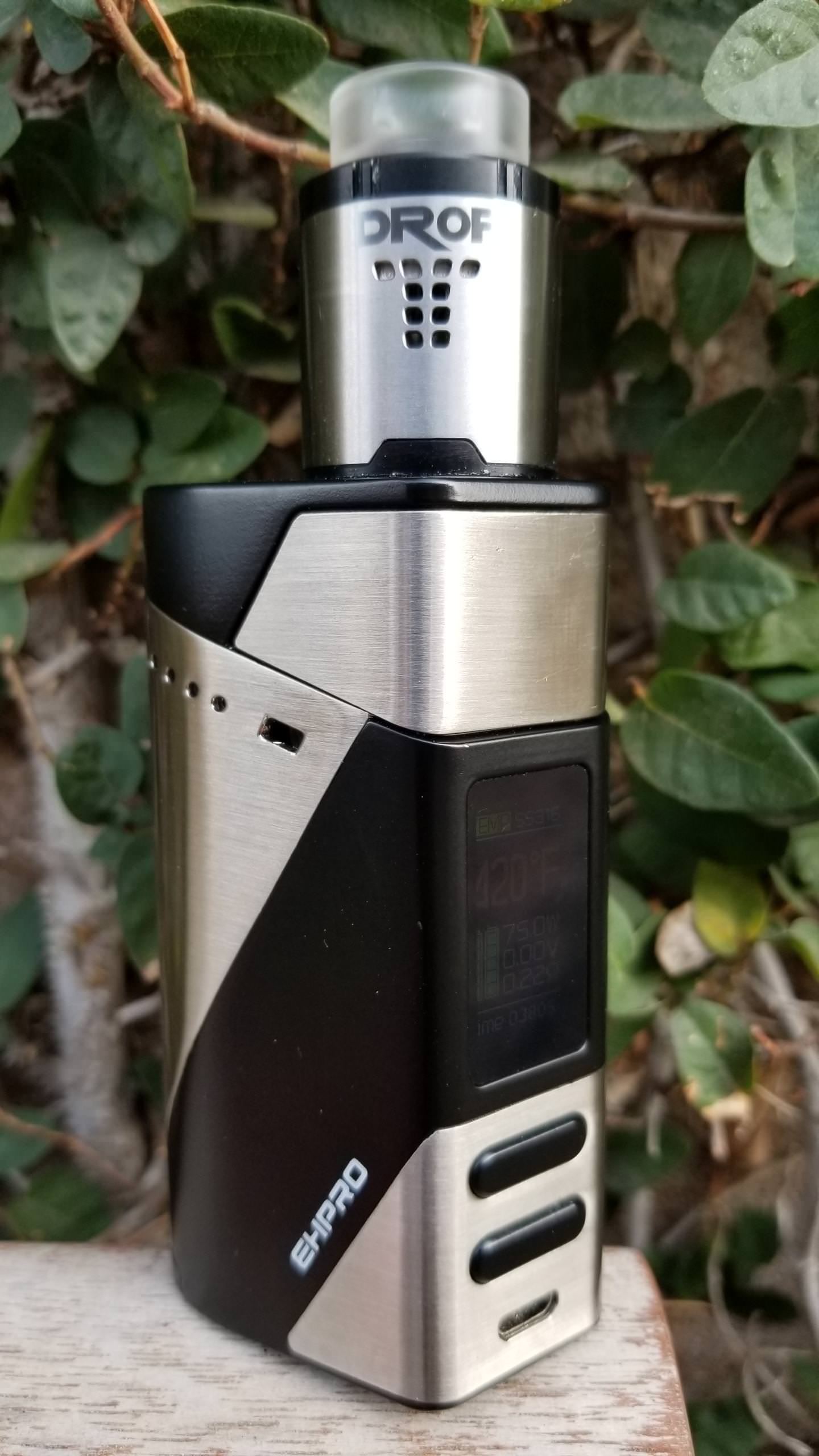 Hell, even a black Dead Rabbit RDA with this hollow aluminum drip tip was a nice match. 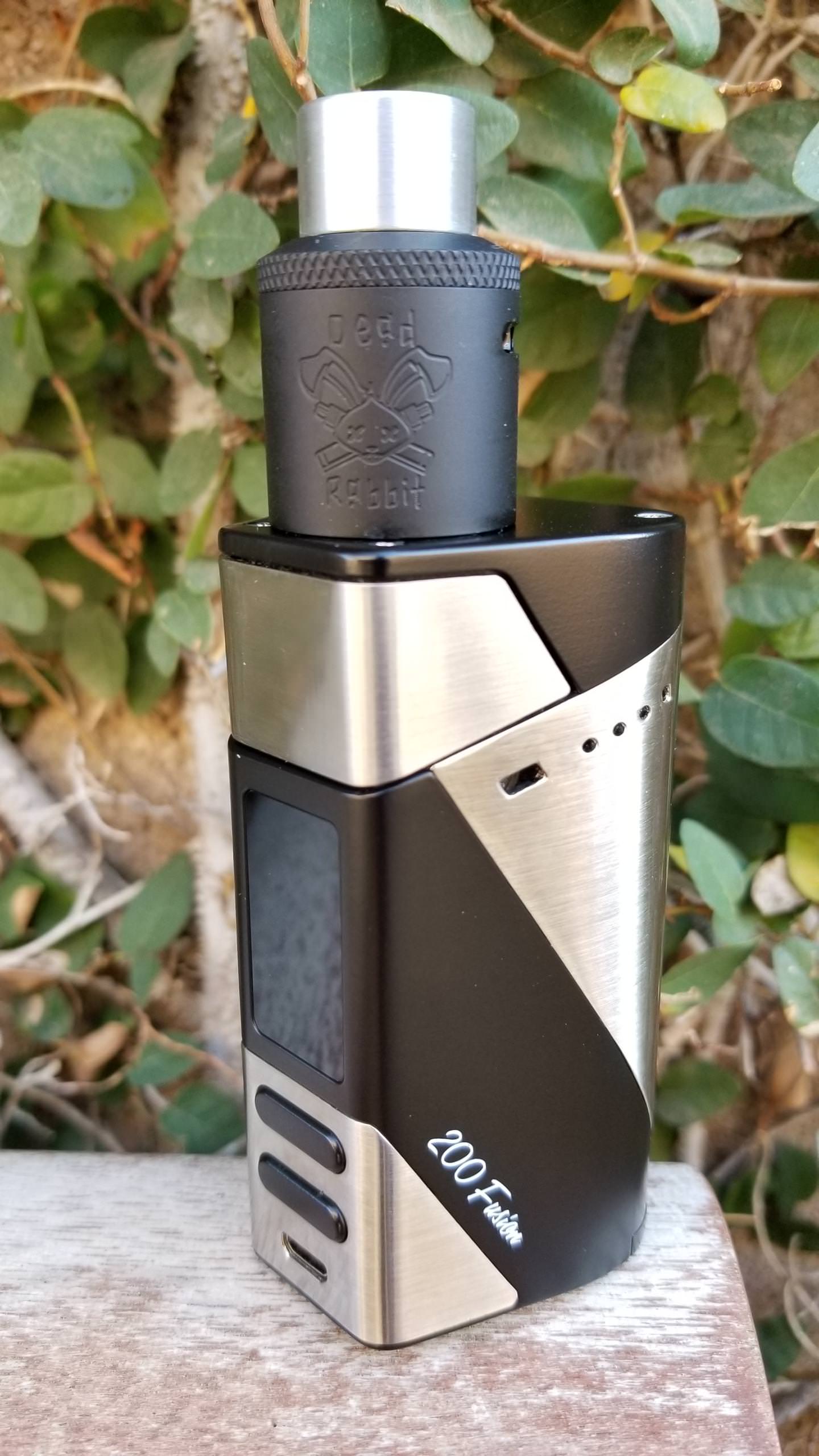 Hmmm, since I am a 30mm tank fan gotta try that right? 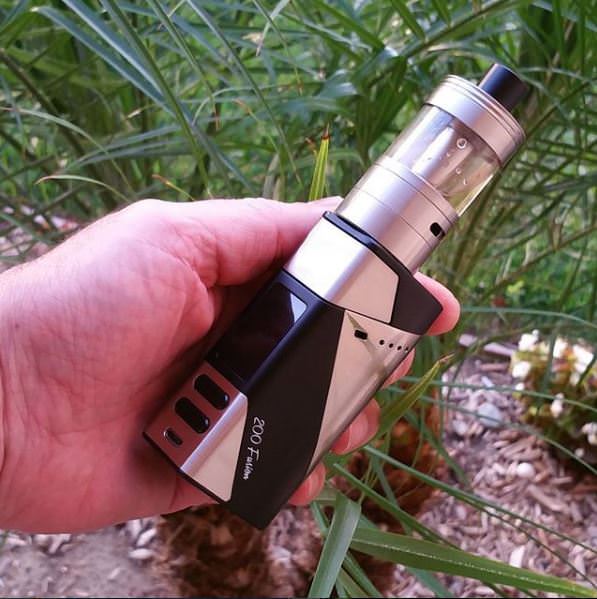 1mm overhang in the front, not bad and that means 28mm tanks fit with no overhang, ok, so far so good.
Since it reminded me of the Battlestar I thought it would be a good idea to give you an idea of the size compared to it and the Asmodus Minikin V2 since they all share a similar shape. 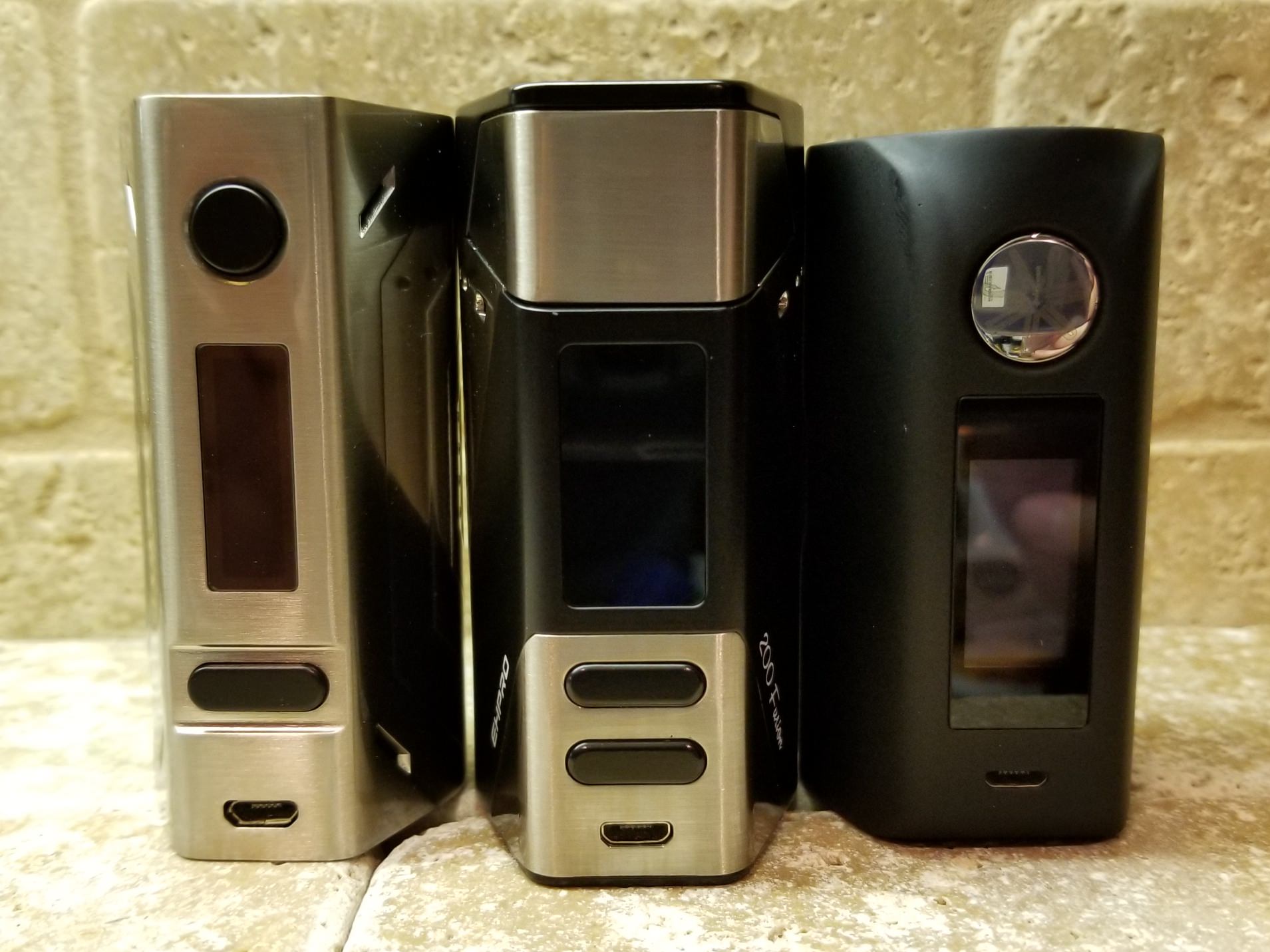 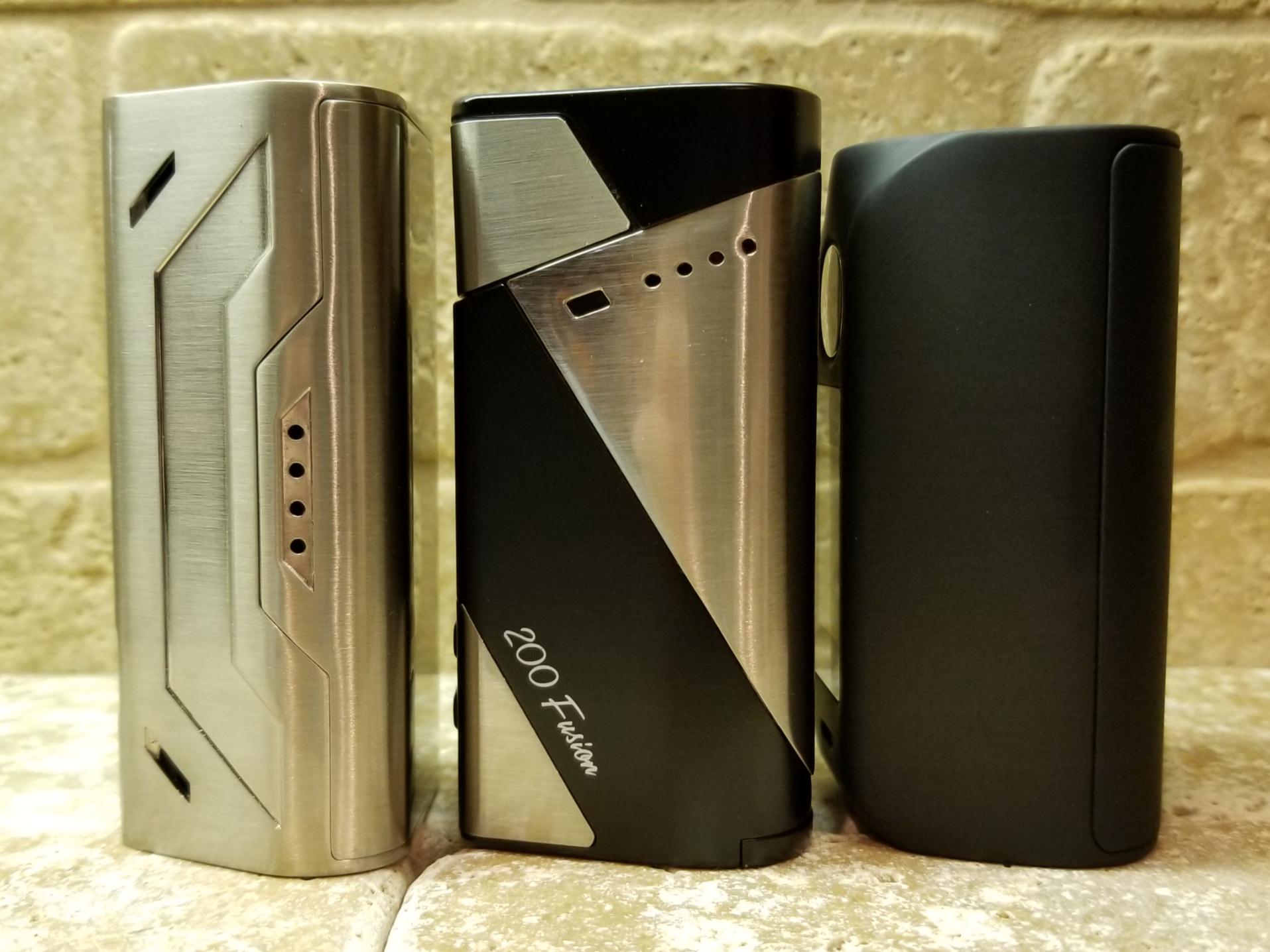 As you can see the Fusion is the same height as the Battlestar but taller than the Minikin. The Fusion also has more depth than the other 2 mods, it is just a bigger mod overall. What you get with that bulk though is a mod that can hold up to a 28mm tank without overhang, the other 2 you are limited to 25mm.
The Minikin V2 is the most comfortable to hold followed by the Battlestar. The Fusion is by no means uncomfortable to hold, just that it is bulkier than the other 2 and a little more heavier, 11 grams heavier than the Minikin V2.
Build quality
I have been using the Fusion daily for almost a month now and the finish has held up nicely aside from some light scratching on got on the back of the brushed finish SS and a small pin size nic near the display. All the pics were taken today so that is what it looks like after a months use.
The 510 has been solid and every tank fits oh so close to flush, the reason for this is the 510 is slightly raised so no fear or tank rash. 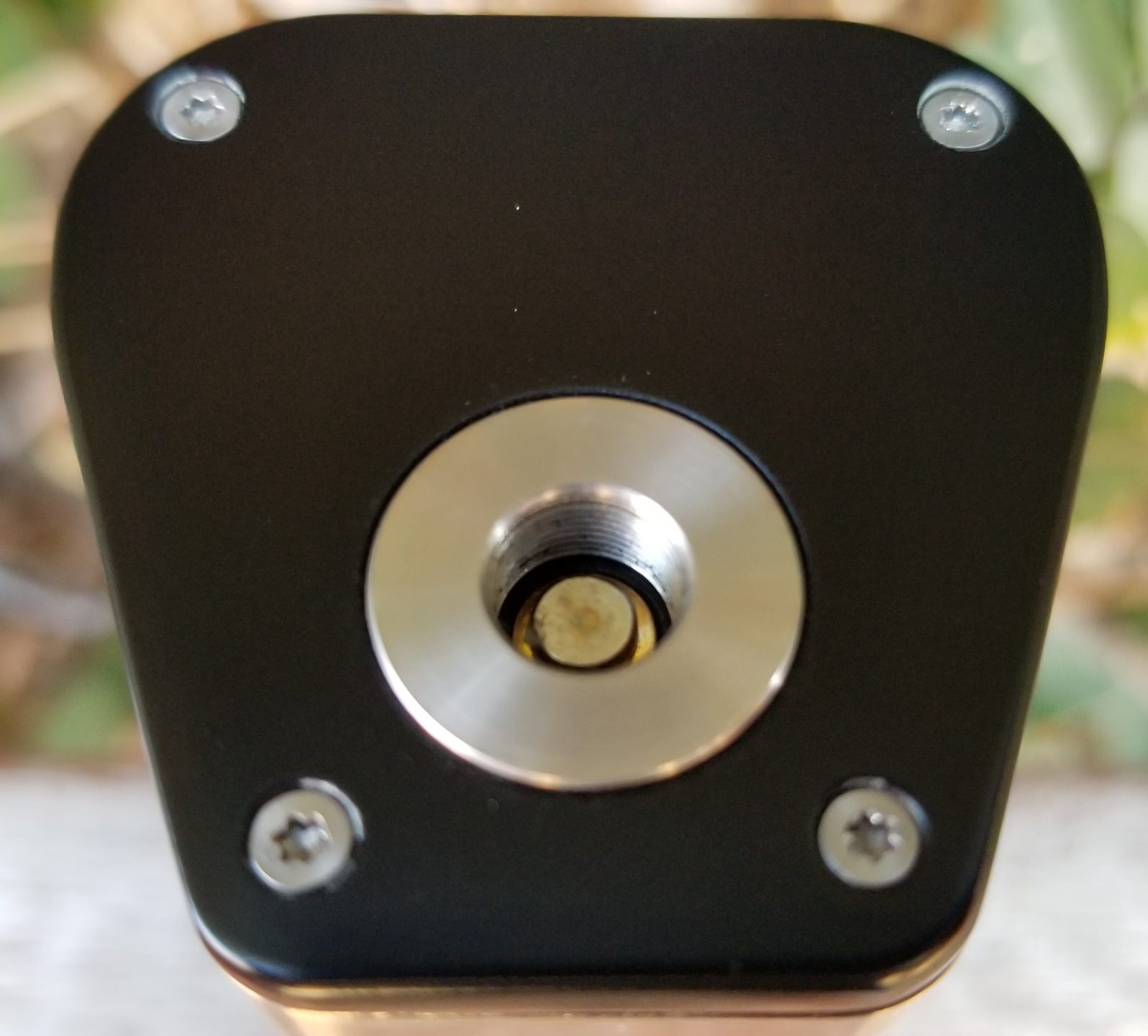 Here is a pic of the inside of the 510. Doesn’t appear to be a nut but is secure and yanking on the 510 with a tank attached it did not move at all. 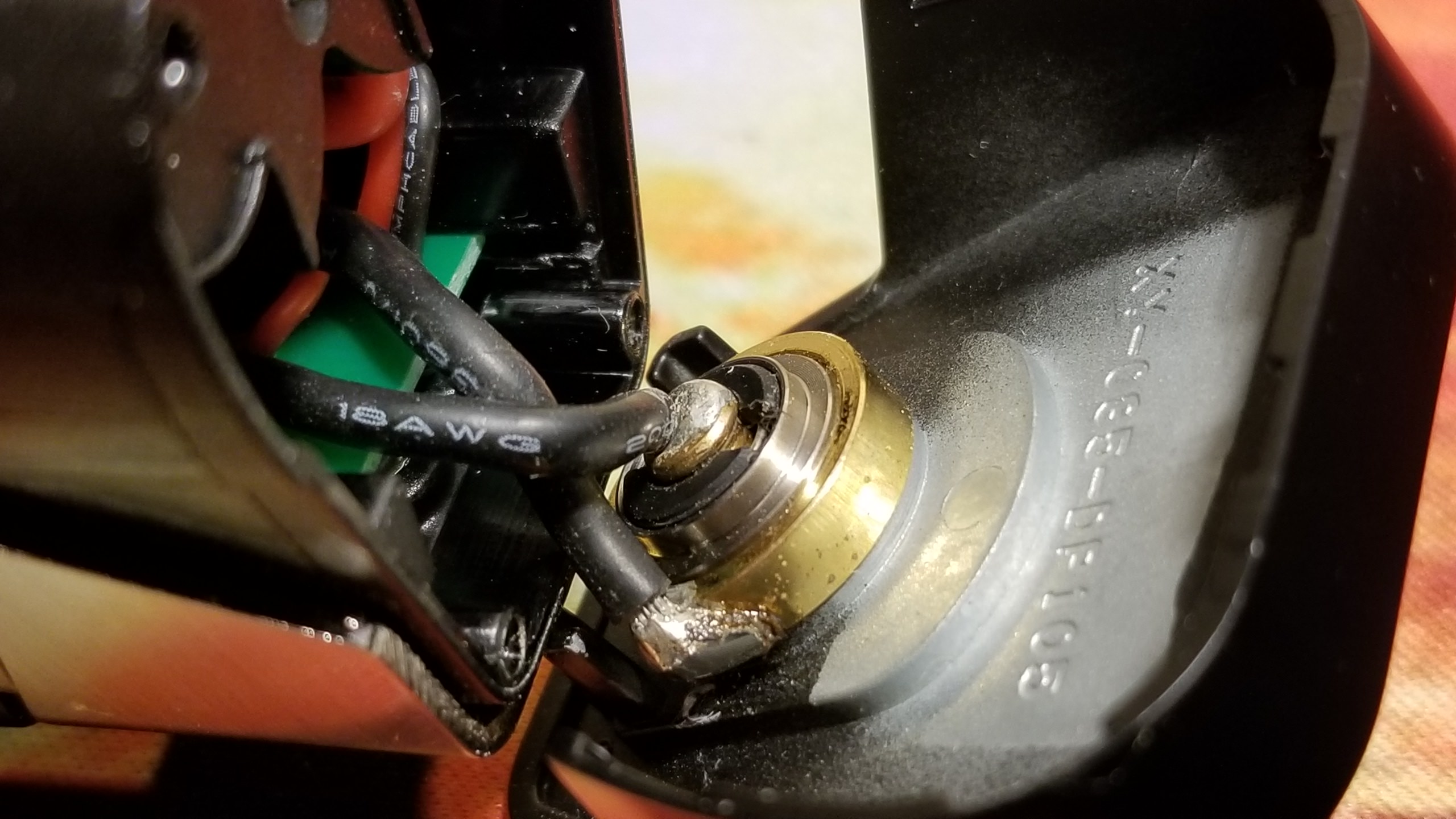 I have not had any problems with the battery door opening up, it has been secure the whole time I have been using it. I did try pulling the mod back while on a mouse pad, took a few tries but did get the battery door to open which might be a problem for some. 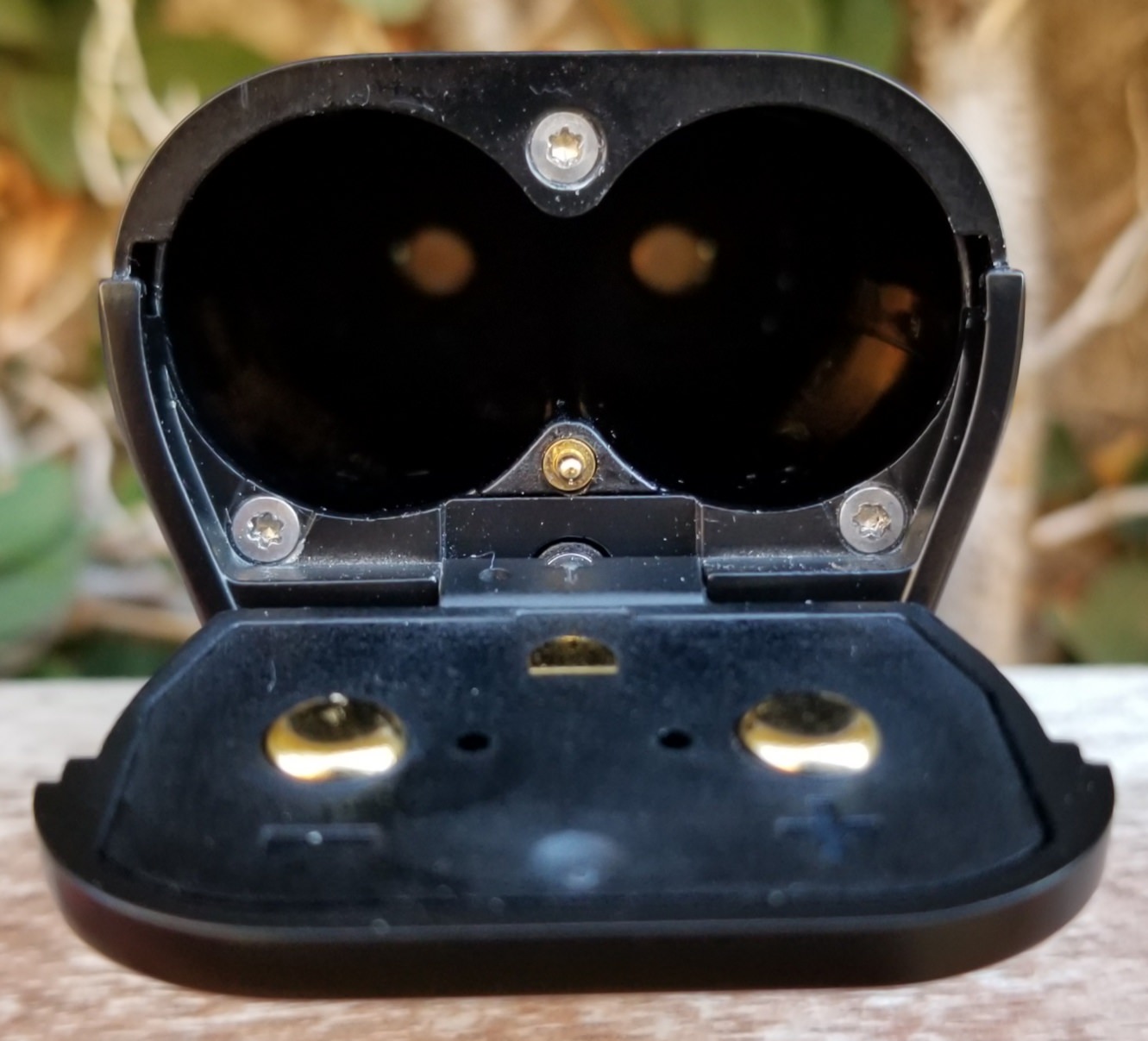 No rattles at all, phew, I thought they would have me join a Latin music band to play the maracas with it.
Buttons work well but are a bit squishy, not the highest quality click. The up and down buttons are interesting, as you know this shares the same body as the 2-in-1 which had dual power modes so needed 2 sets of up and down buttons. I was noticing when pressing either the up or down button it felt like I was pushing 2 buttons, I would hear a click click sometimes. If you click to the right or left of the up or down button you get a single click, if you click to the center of the buttons it sounds like 2 clicks. Not really a problem, the watts did not go up twice when I heard the 2 clicks but I know that will drive some peoples OCD up the wall.
Decent color screen and indoors or outdoors when not in direct sunlight is easy to see. 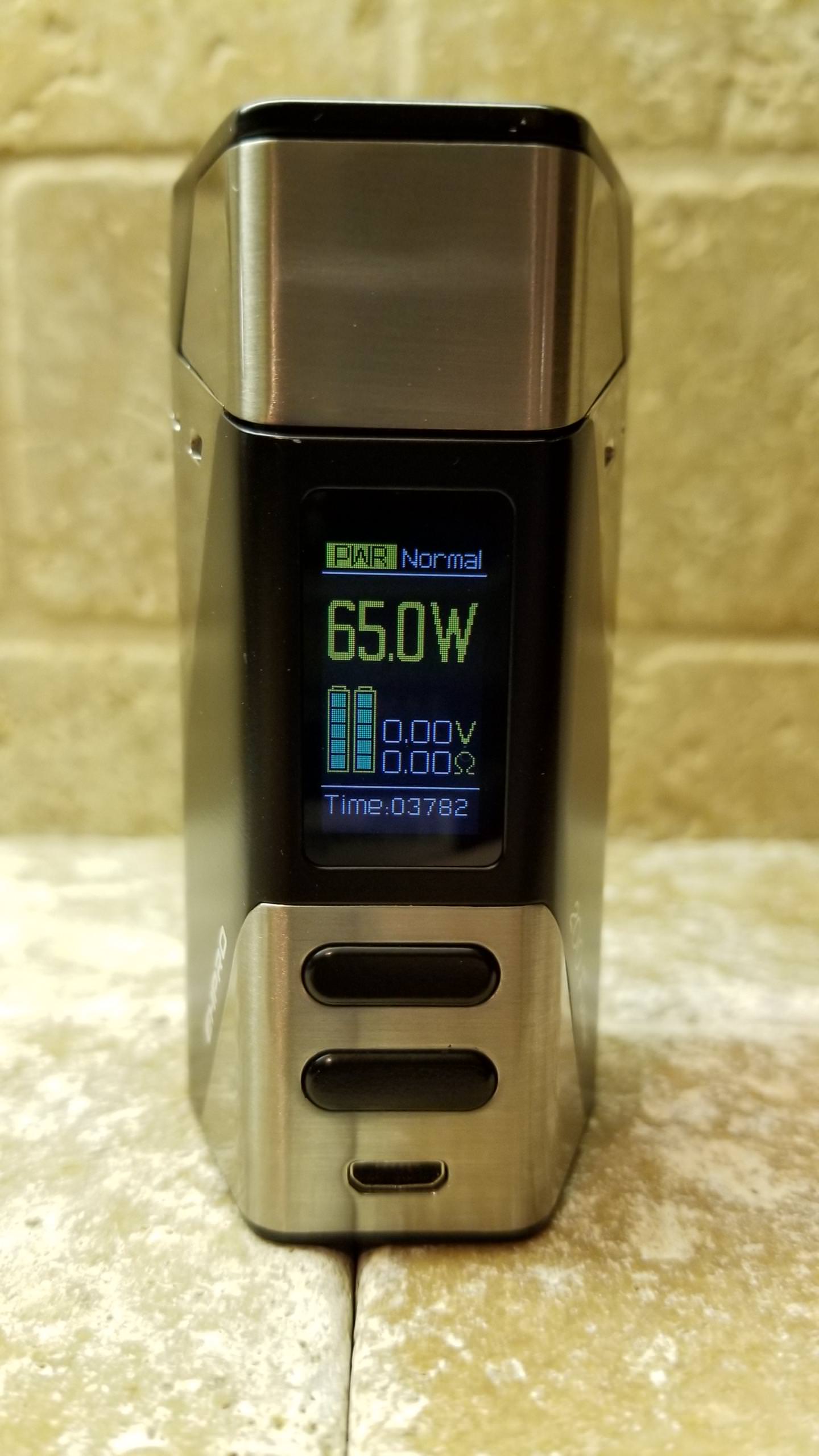 You can also change the screen color by clicking the fire button 4 times. It has 5 color options but the one that is really helpful is the black which helps you see the screen better in sunlight. That first screen can really get washed out in direct sunlight. 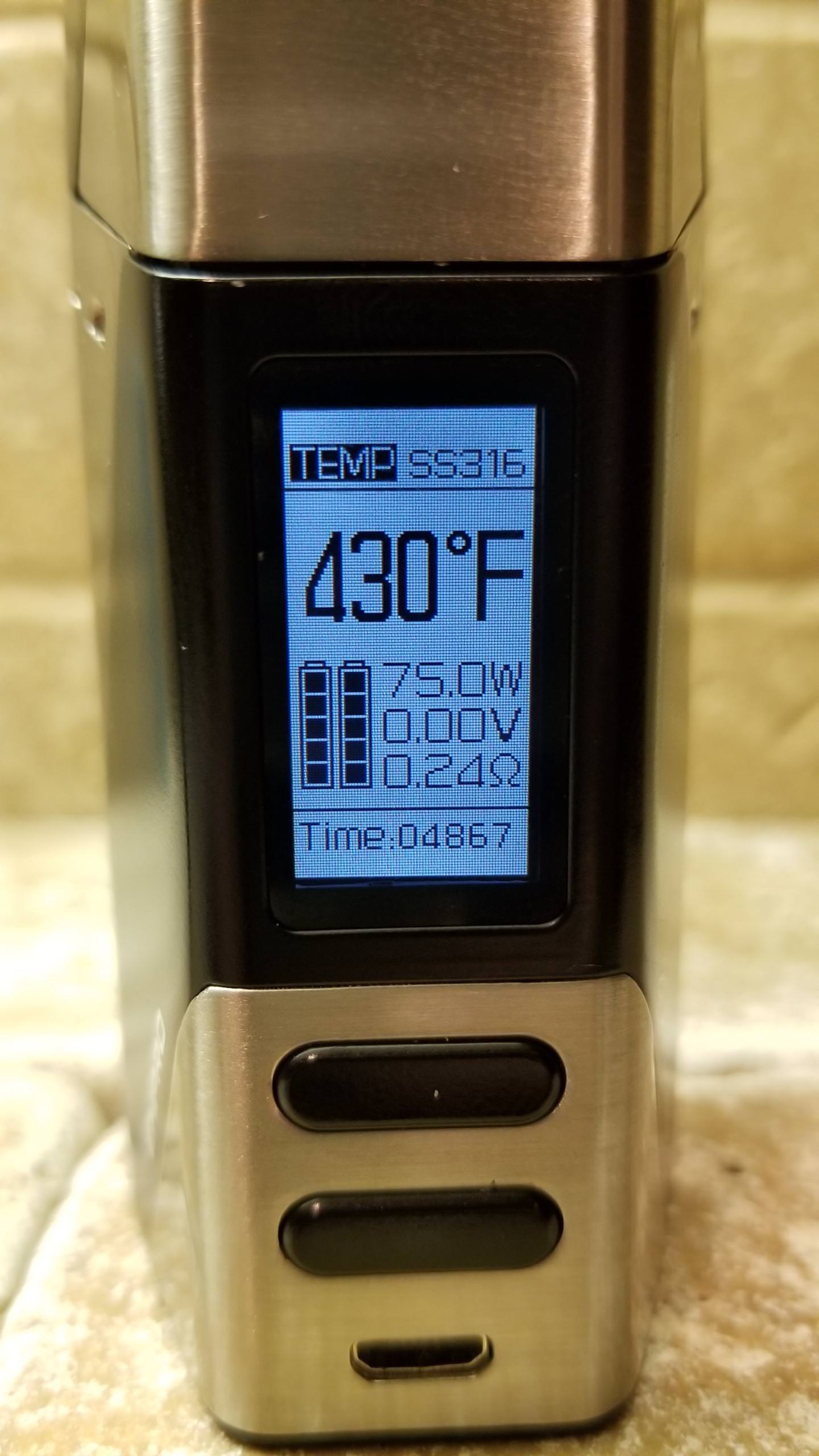 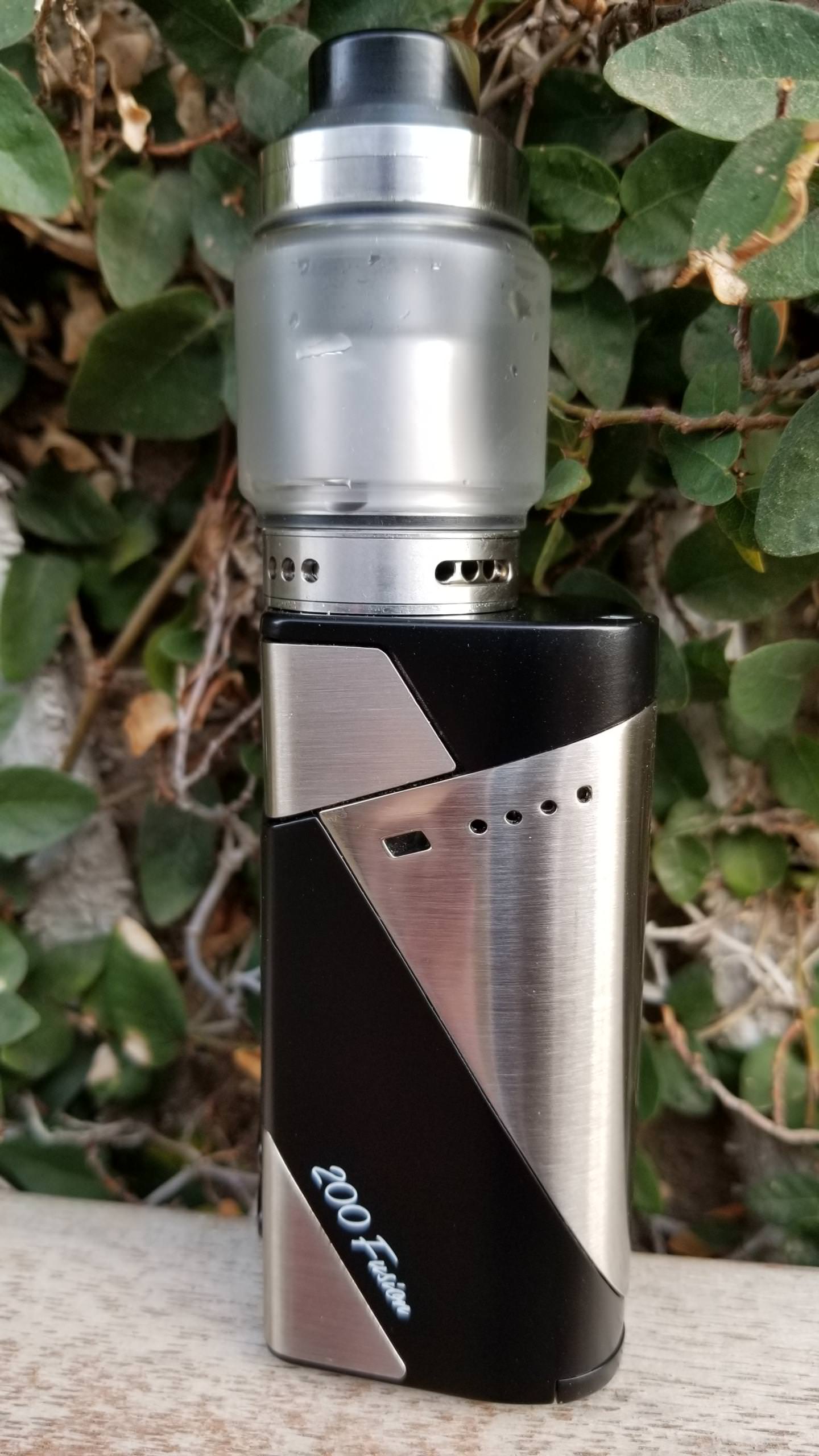 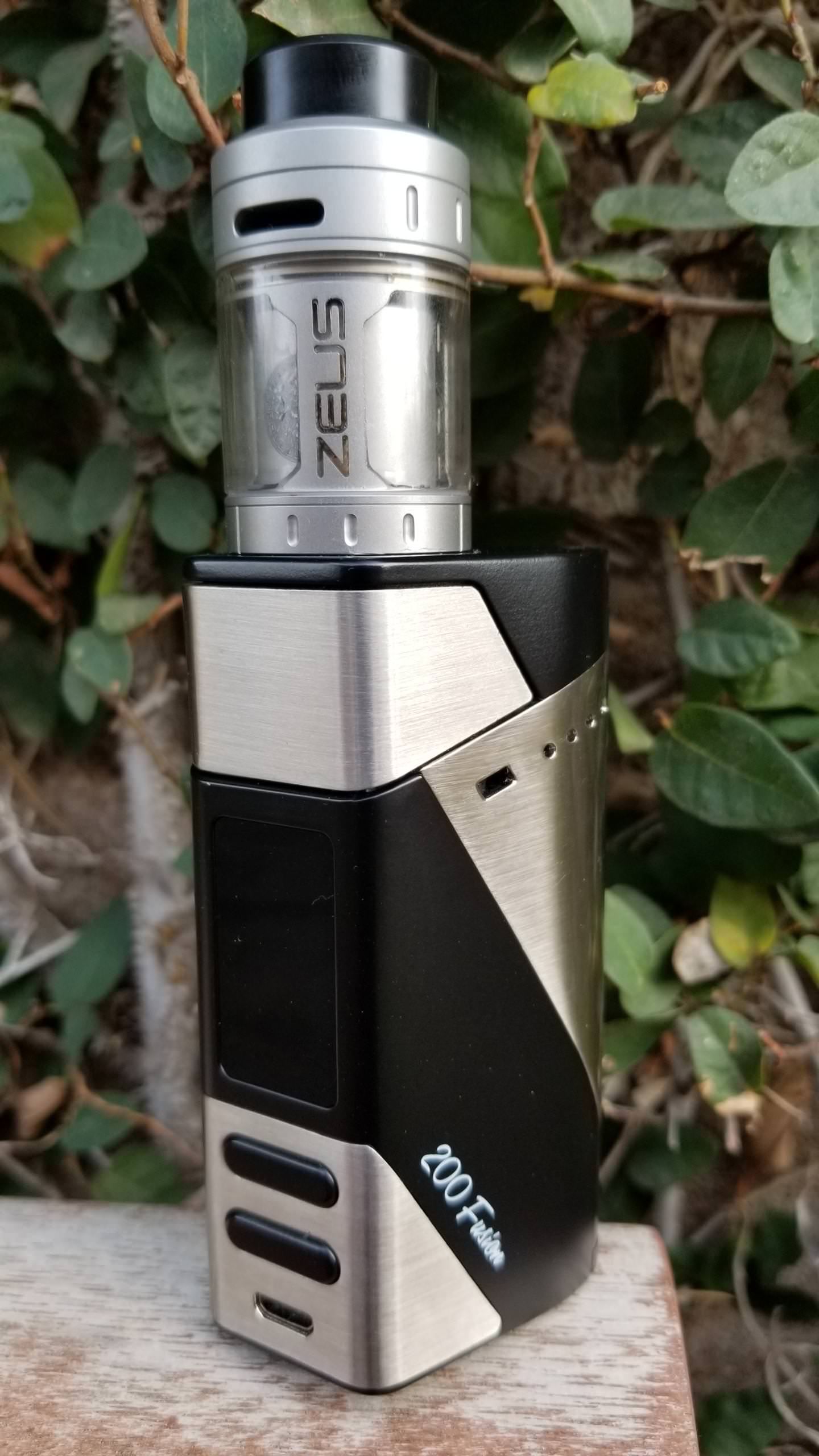 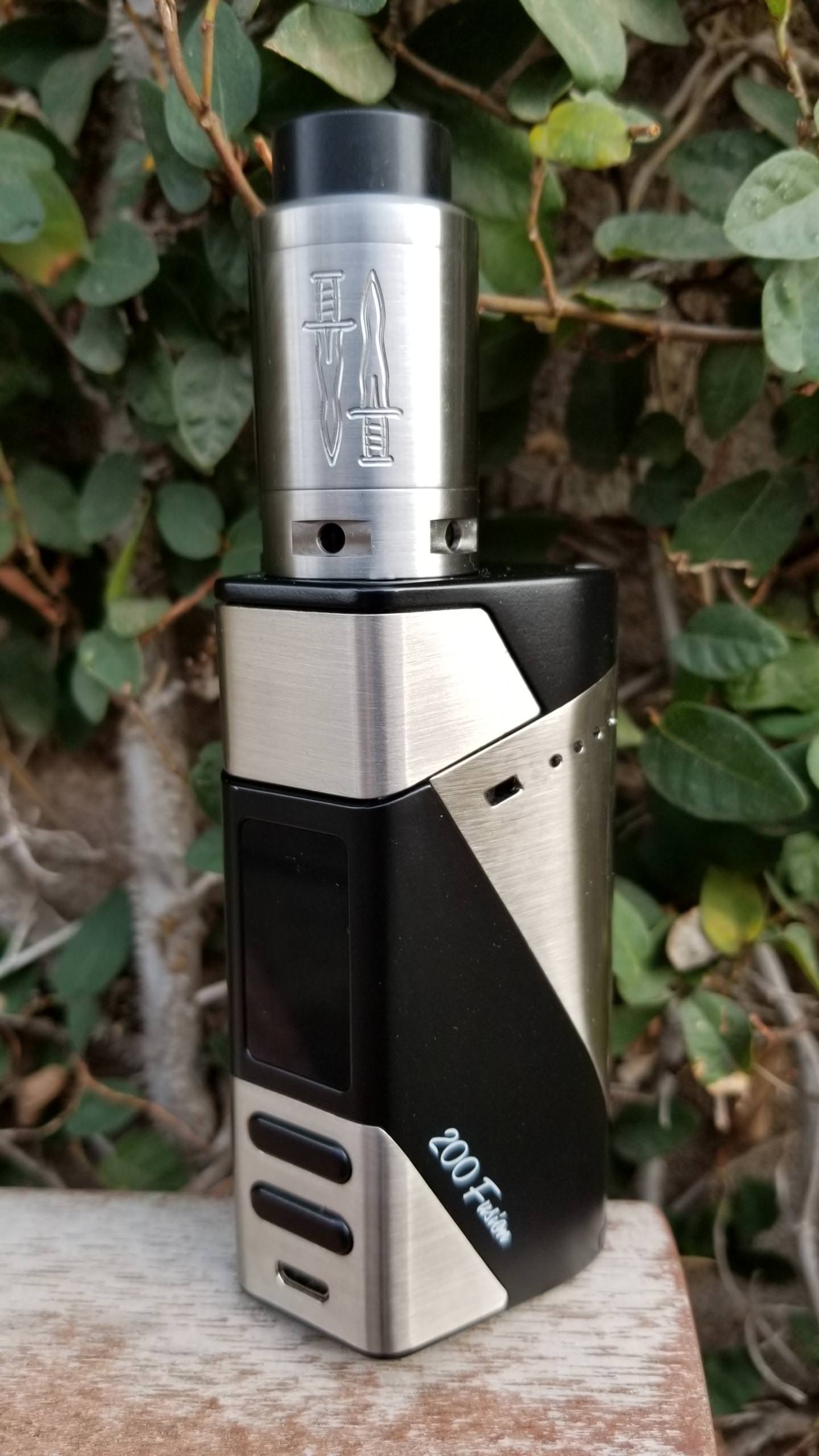 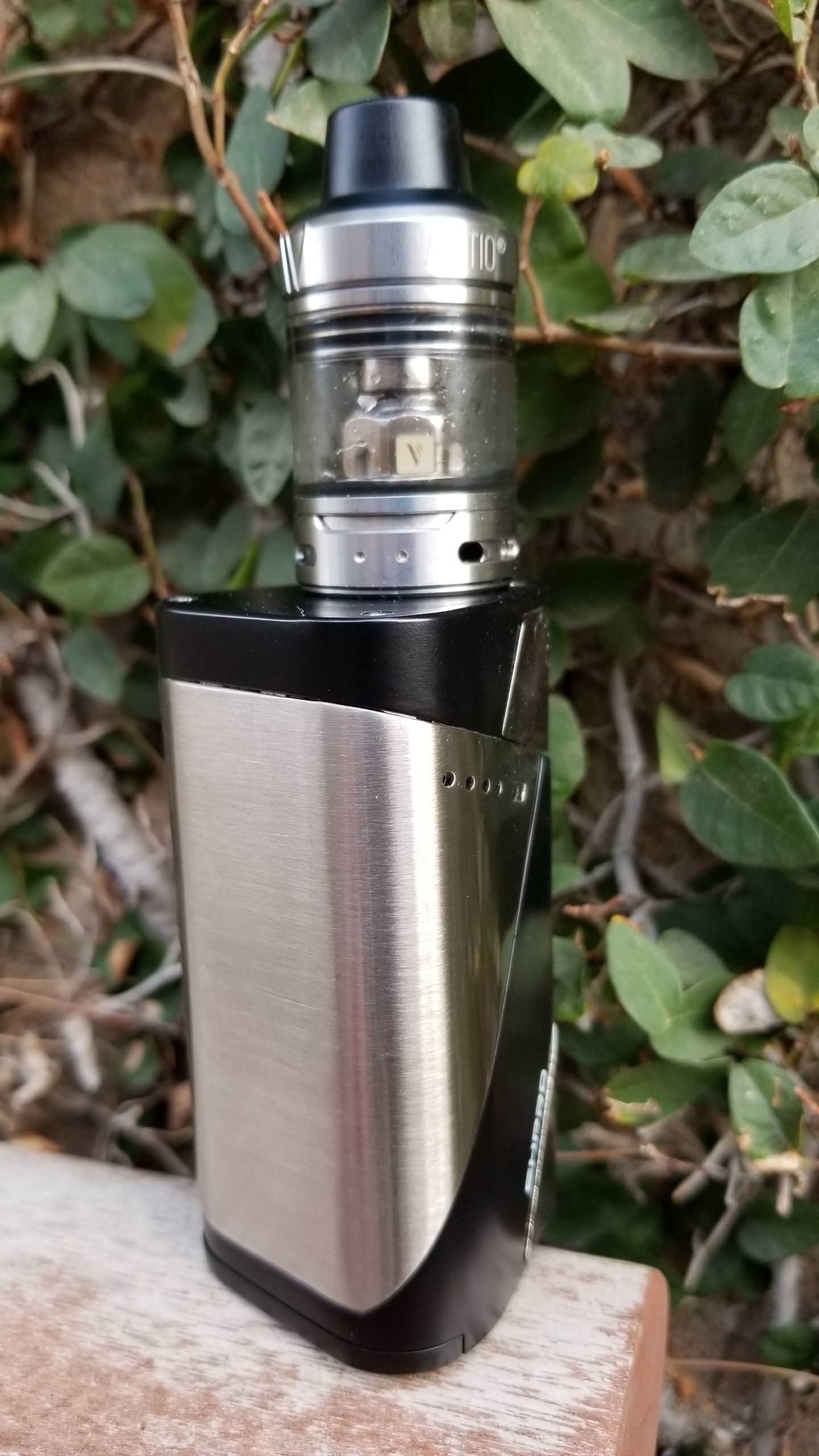