Hello once again and thank you for taking the time to read my review of the Steam Crave Aromamizer Titan 41mm RDTA sent directly from https://shop.steamcrave.com/ for the purpose of this review.

If you want to find out really quick my overall conclusion you can scroll down to the Pros and Cons section and Conclusion to save you some time.

Want options and versatility, this is the tank for you! 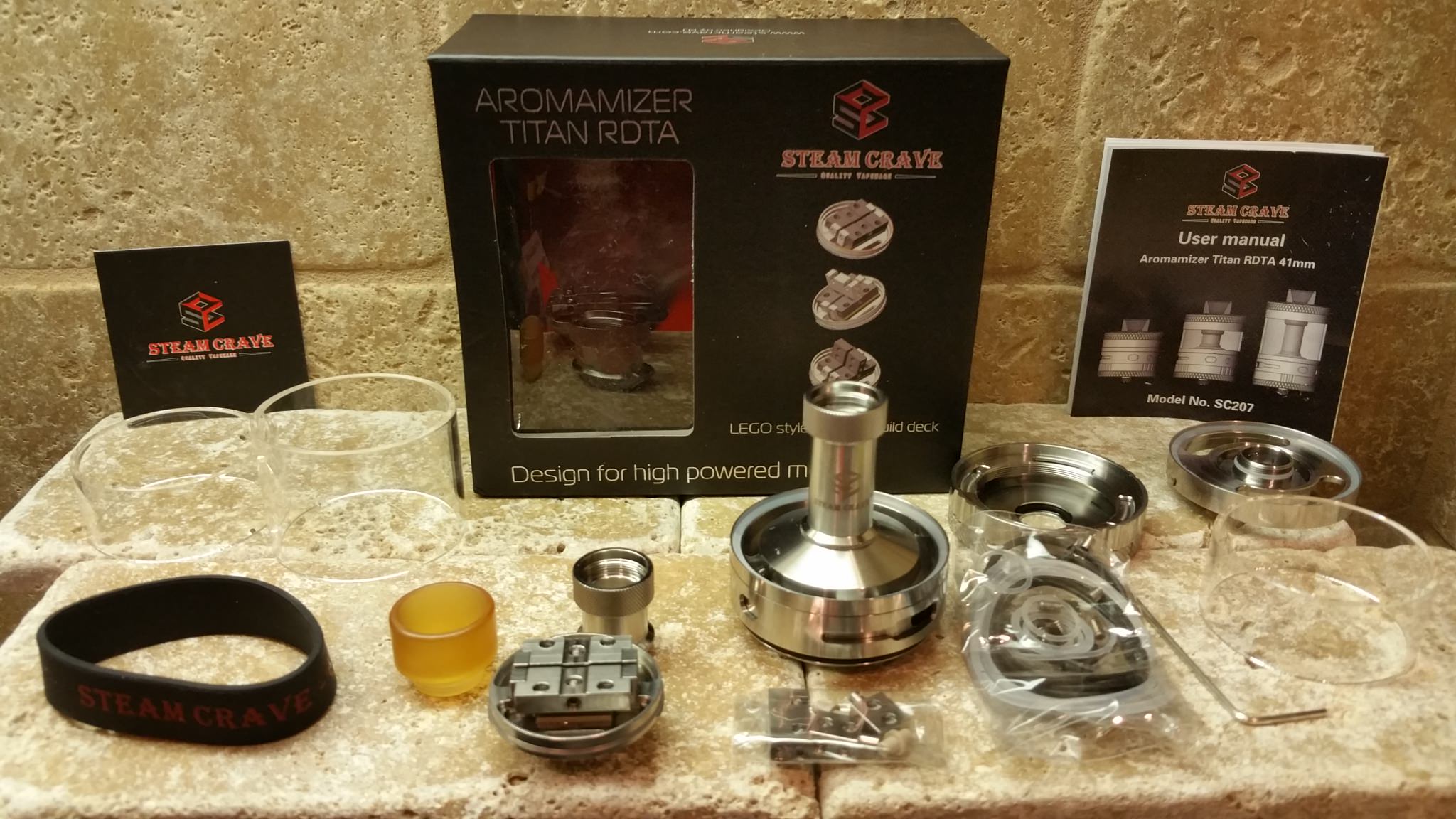 The Titan comes with a ton of stuff:

The really cool thing is the innovative Lego build deck which can be used as a postless, velocity or series deck and can accommodate single, dual or triple coil builds. If you like to build a lot then your gonna love it. 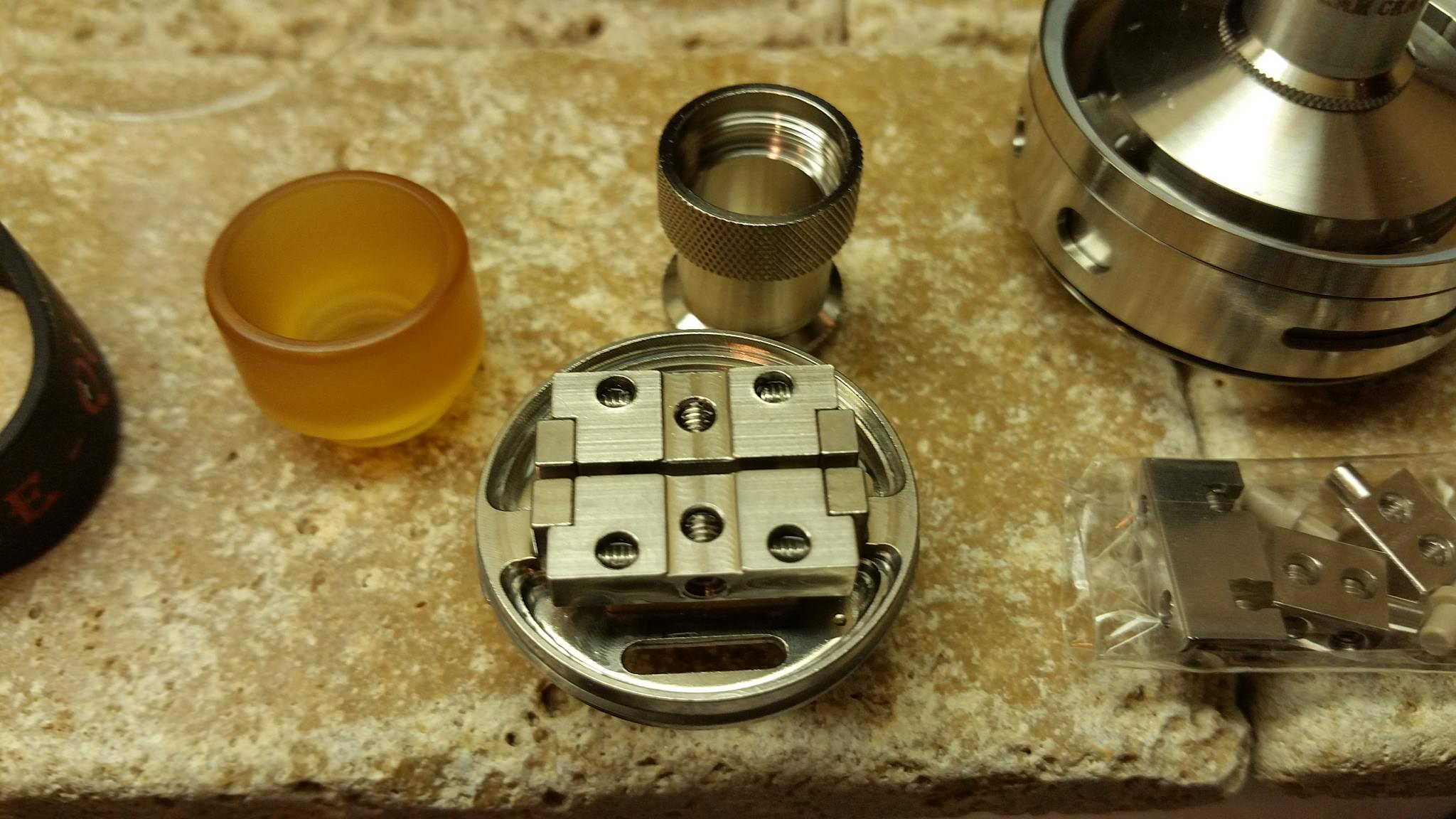 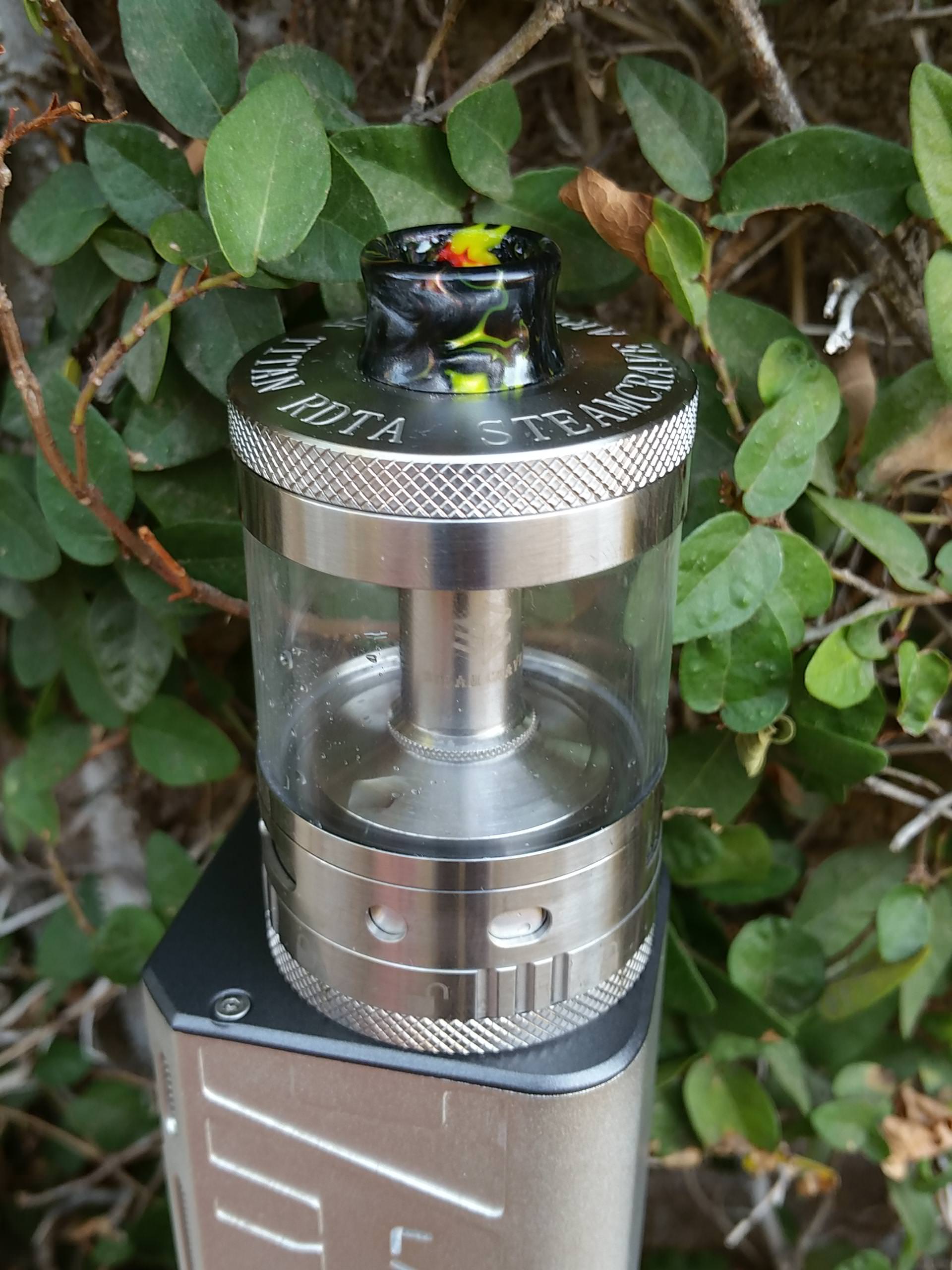 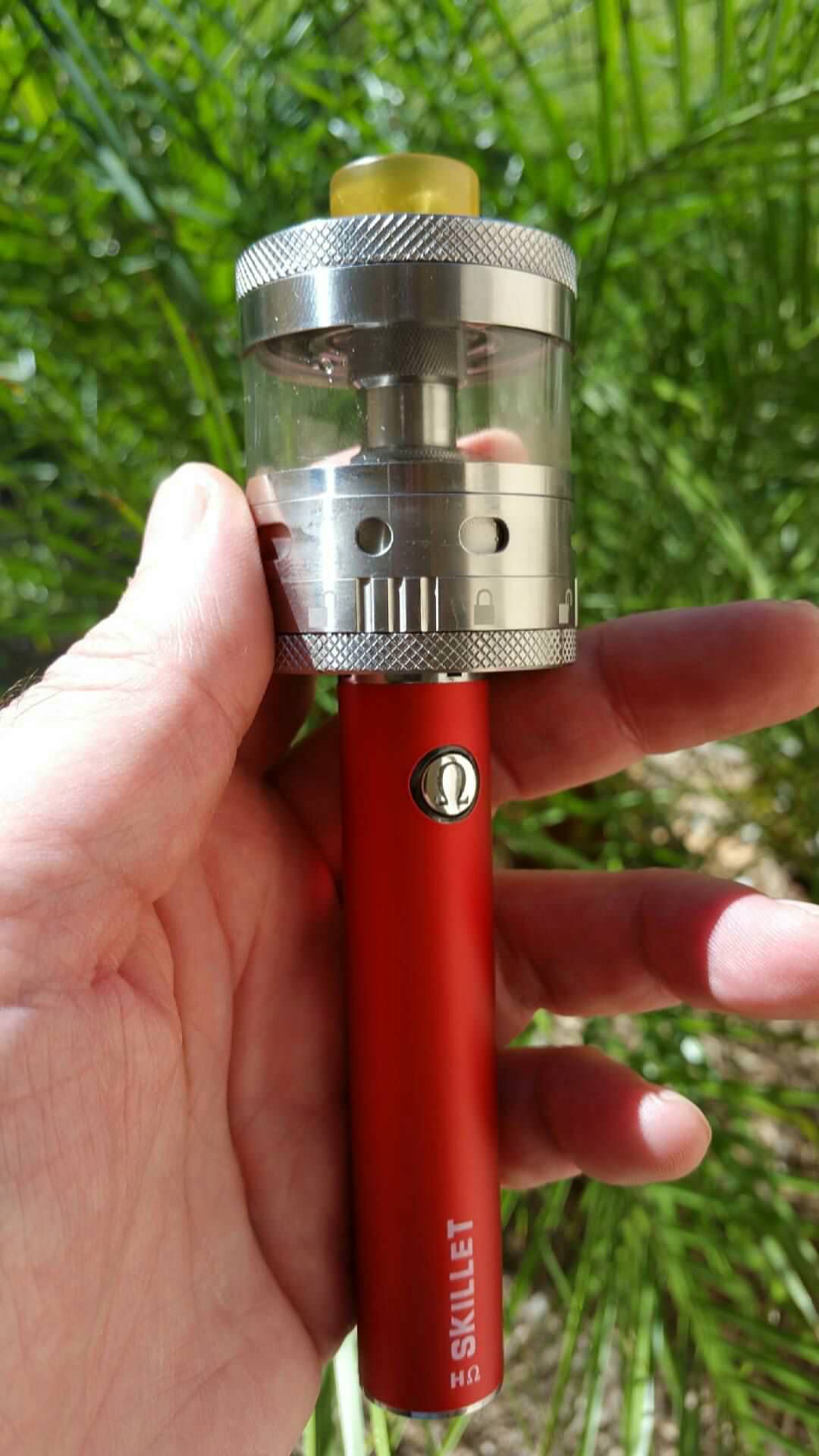 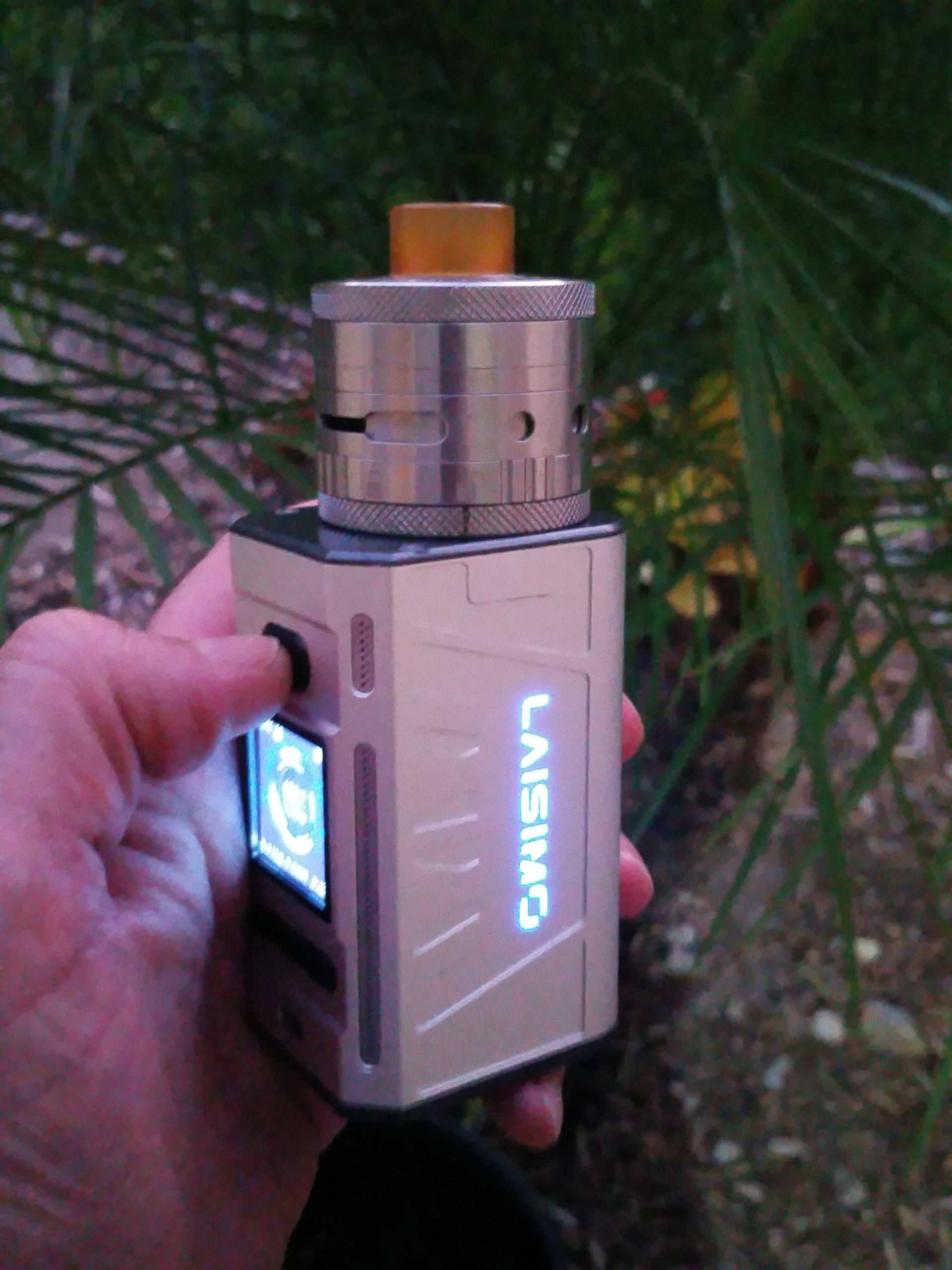 The build deck and oh so many options

There is so much to cover as there are so many options I am just going to show the builds I tried in the month I have been having fun with this monster.

Postless with SS316L Aliens from BDBuilders 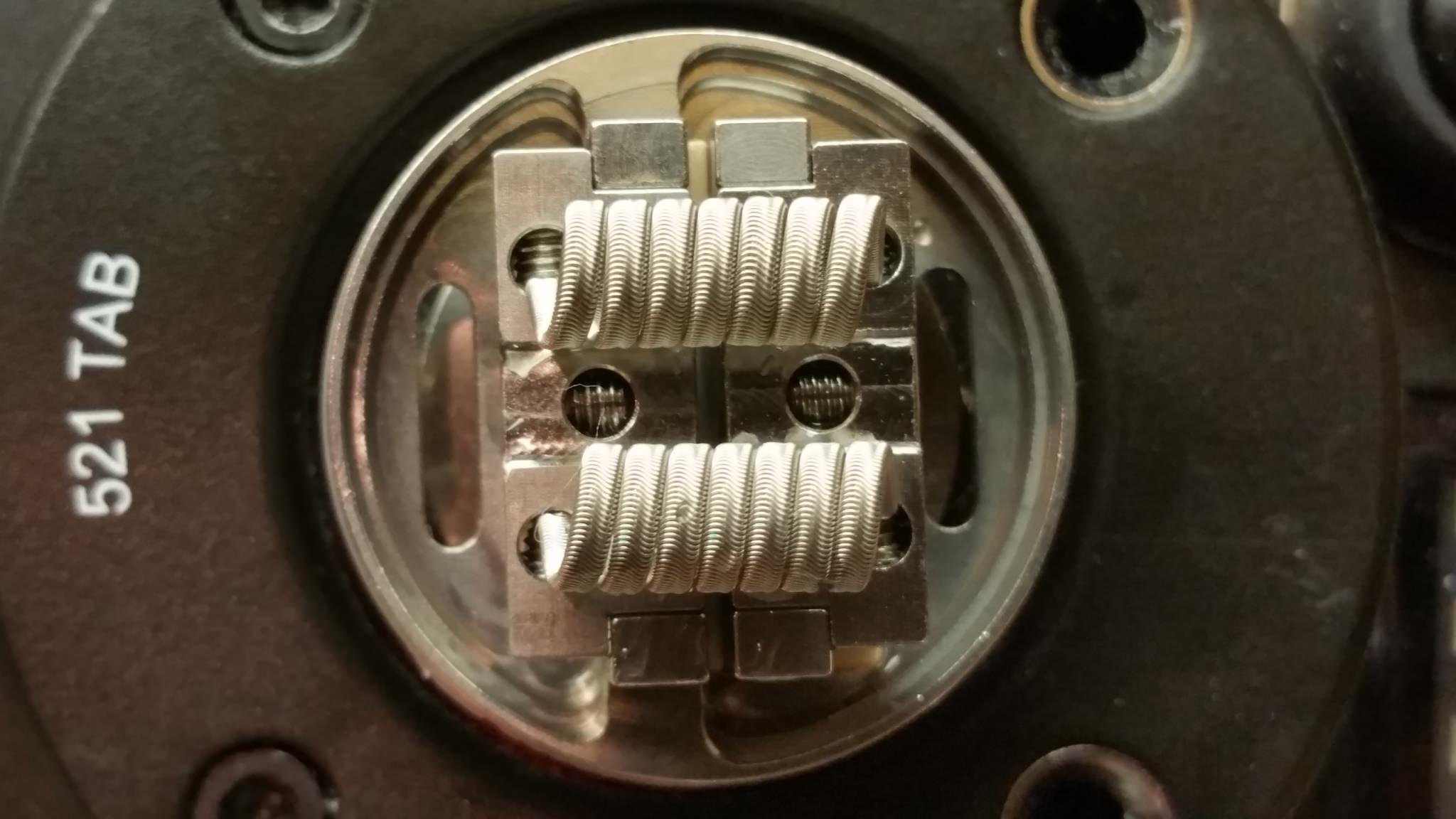 I prefer to have my coils mounted high so the side airflow comes in and under the coil rather than hit the coil on the side and top. It helps with flavor I find and this worked well for me. 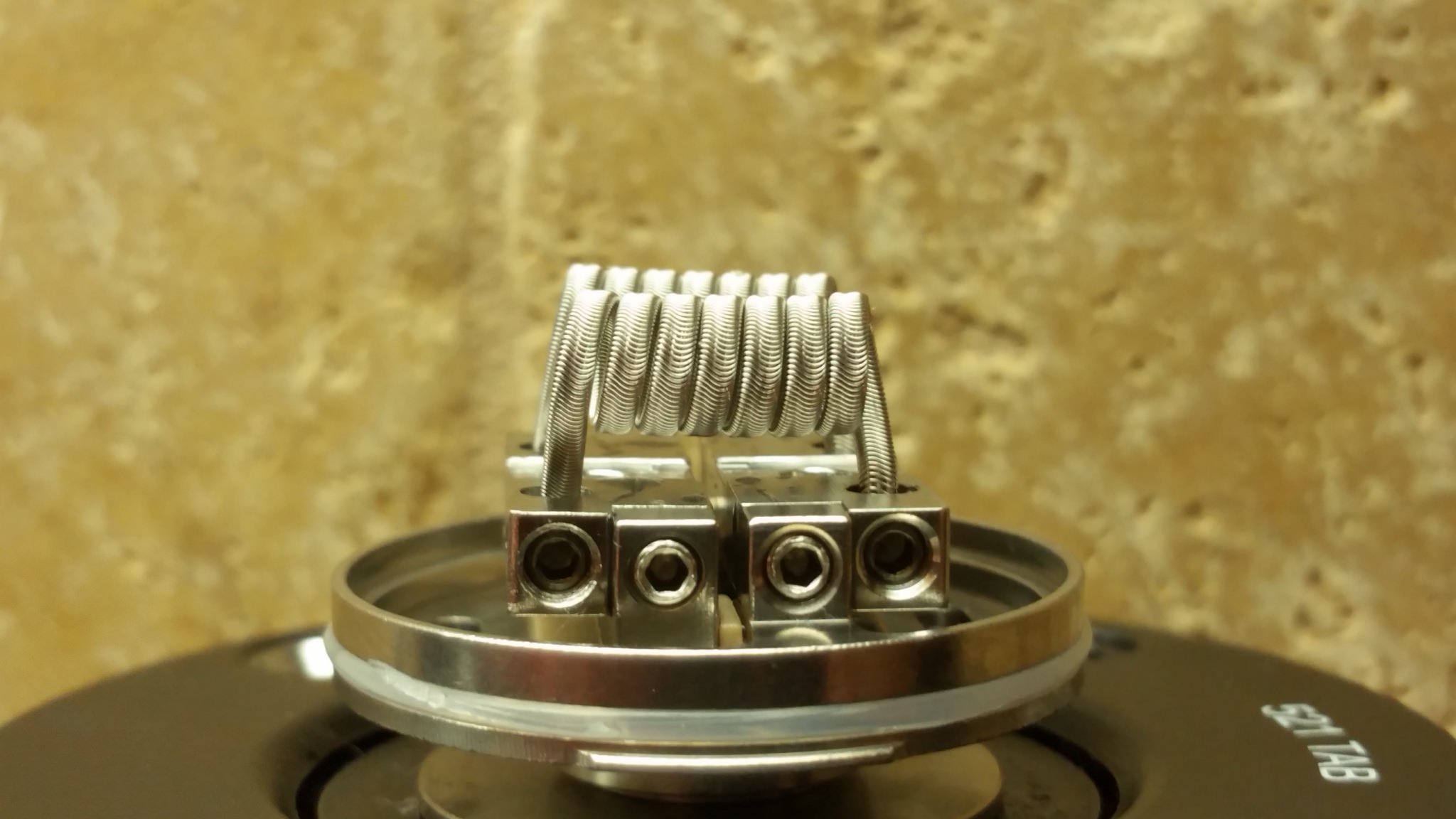 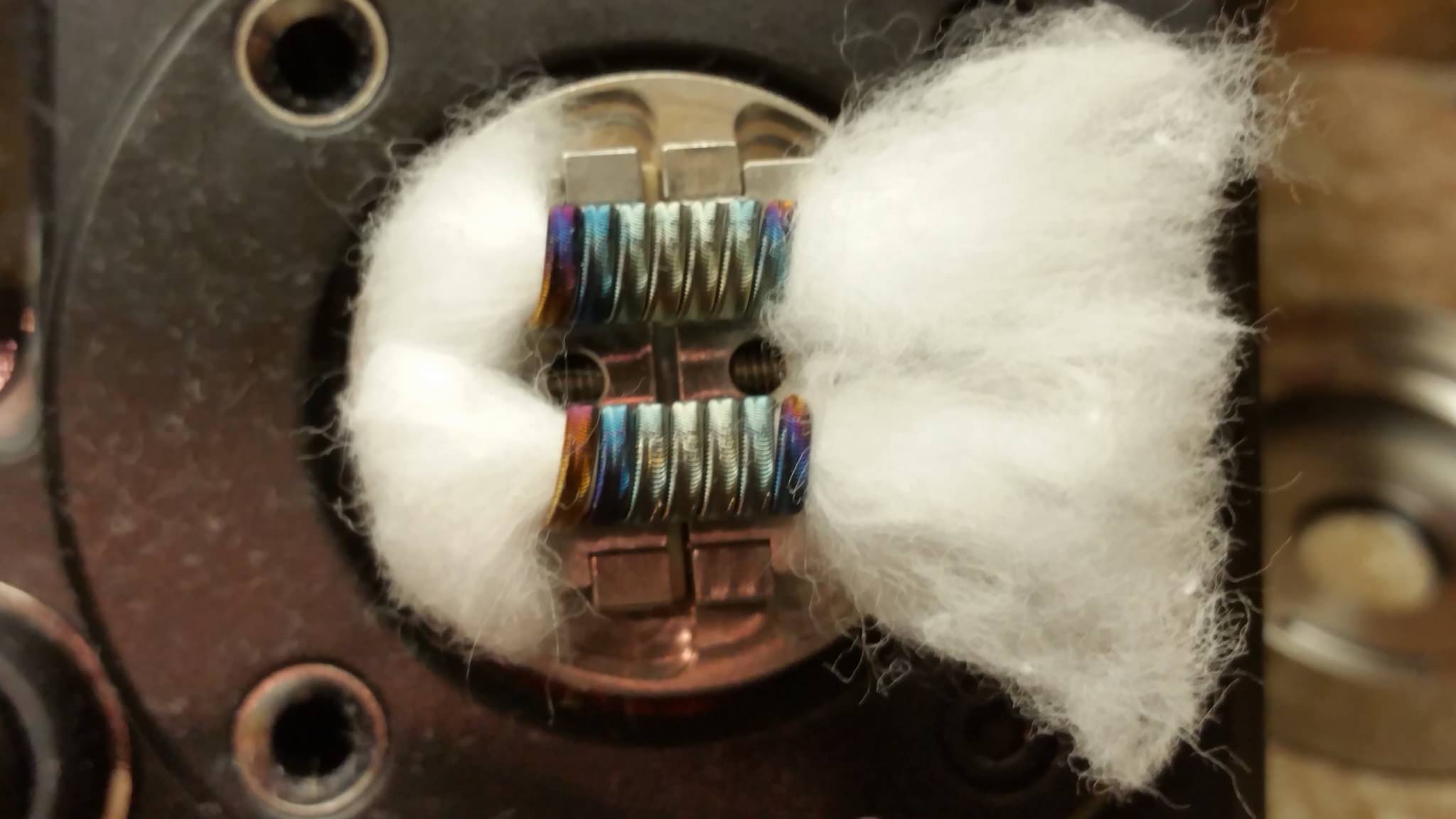 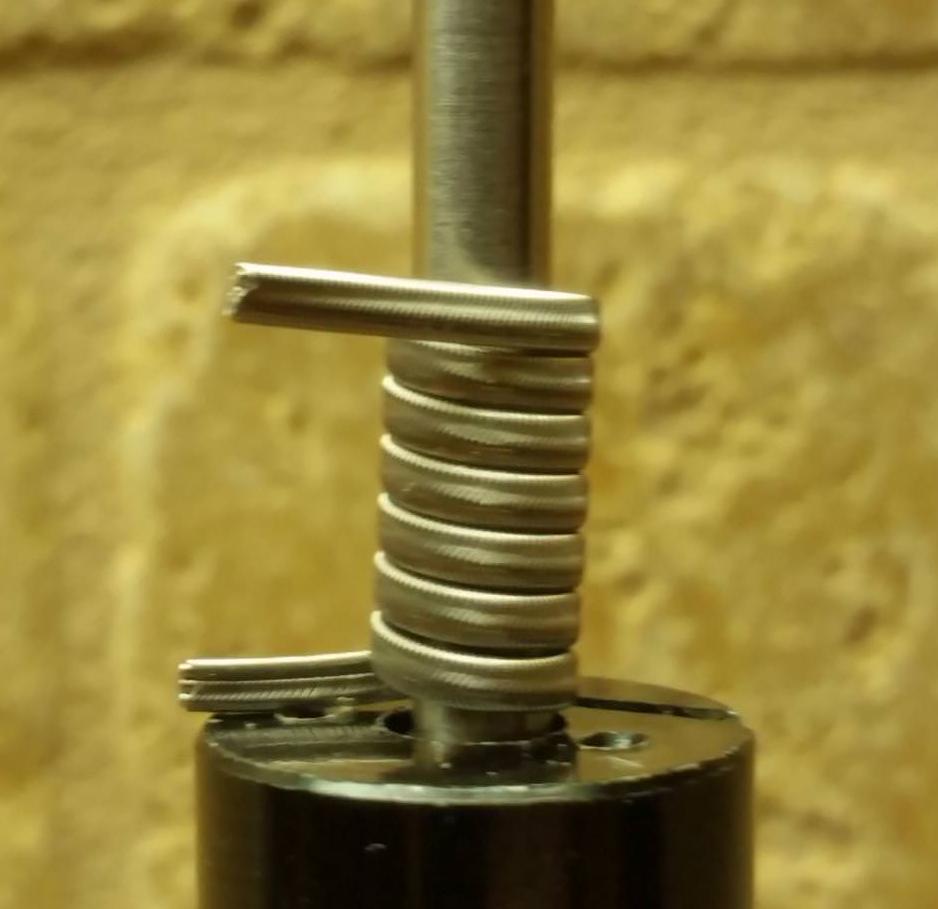 That is on a coilmaster jig just clipped to the end of the barrel.

Great vape and good flavor right off the bat but I expect as much from BDBuilders Aliens and they did not disappoint in the Titan. 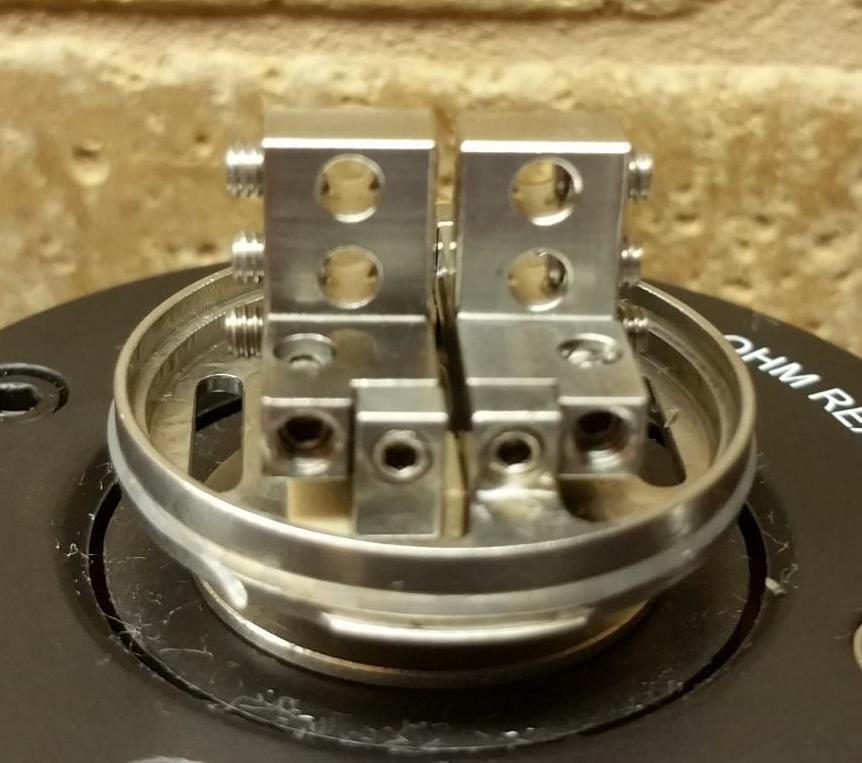 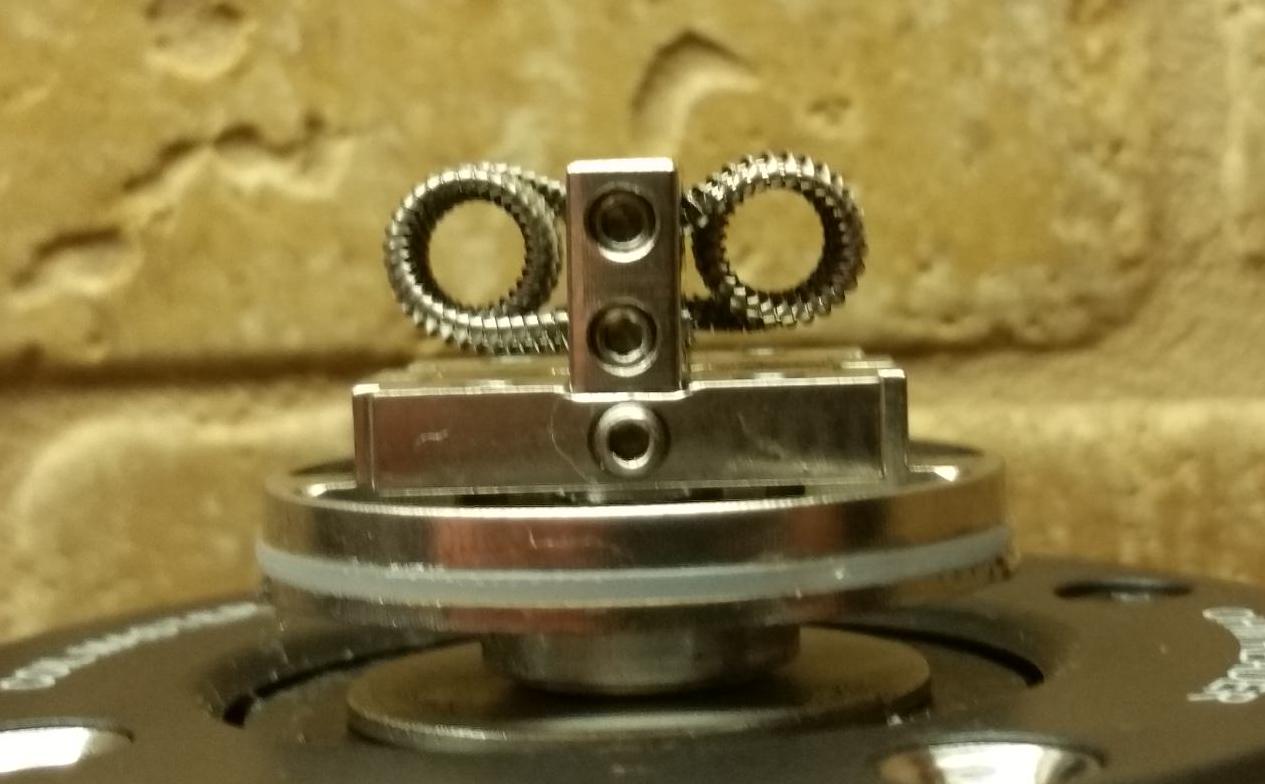 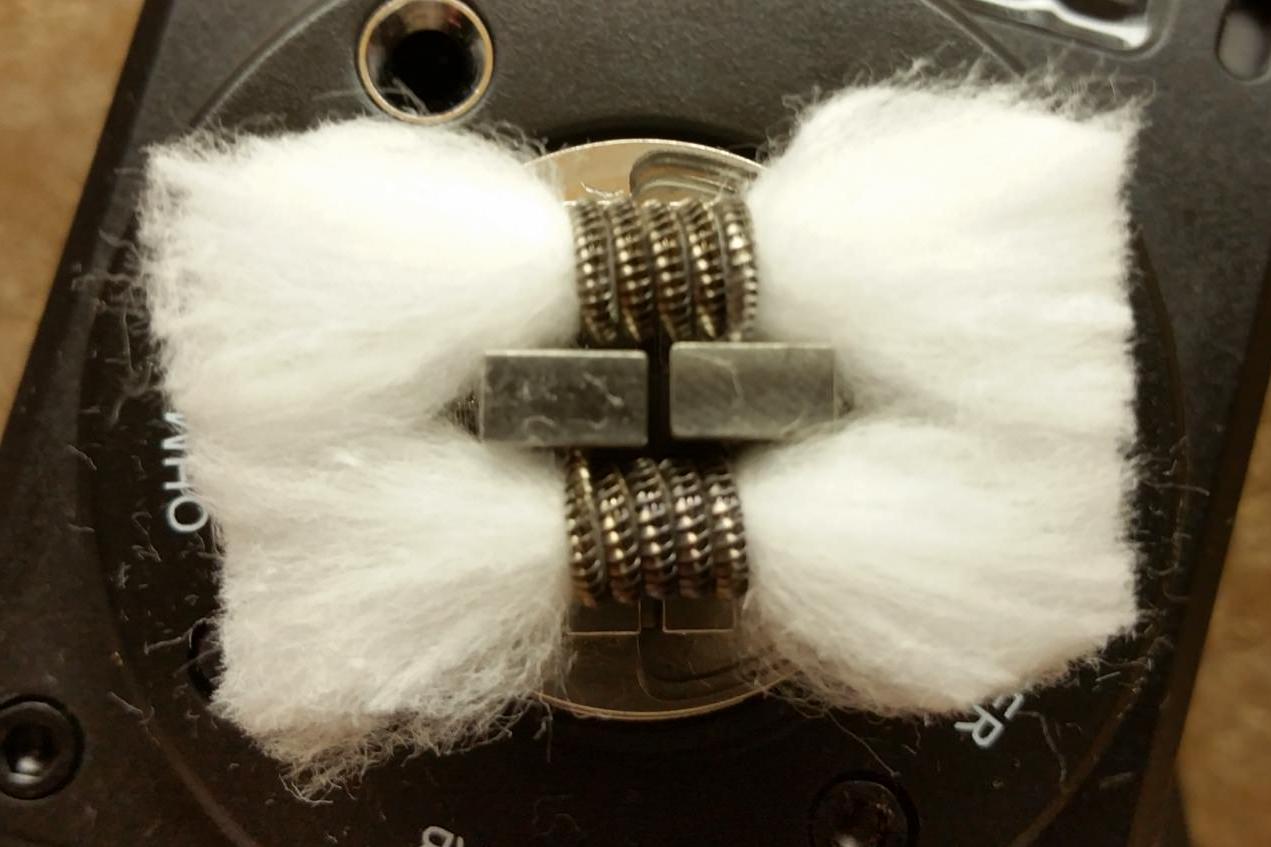 I can’t remember where I got these massive coils from with with a 5mm ID never had a tank I thought they would work well in until now. These monsters wanted 200 watts easily and the Titan just laughed at them telling me….that’s all you got punk….puhlease.
More of a fog machine than the previous Alien build which had better flavor but still a lot of fun to vape on. 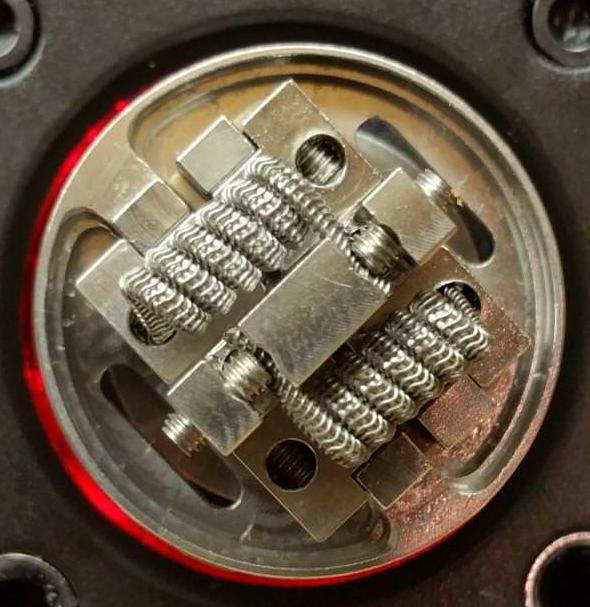 Here is something that needs to be shown or you will get pooling of liquid and possible leaking. You can see in this photo below that one side has a much larger area and unless you cut your cotton to account for it the pooling will equal leaking. 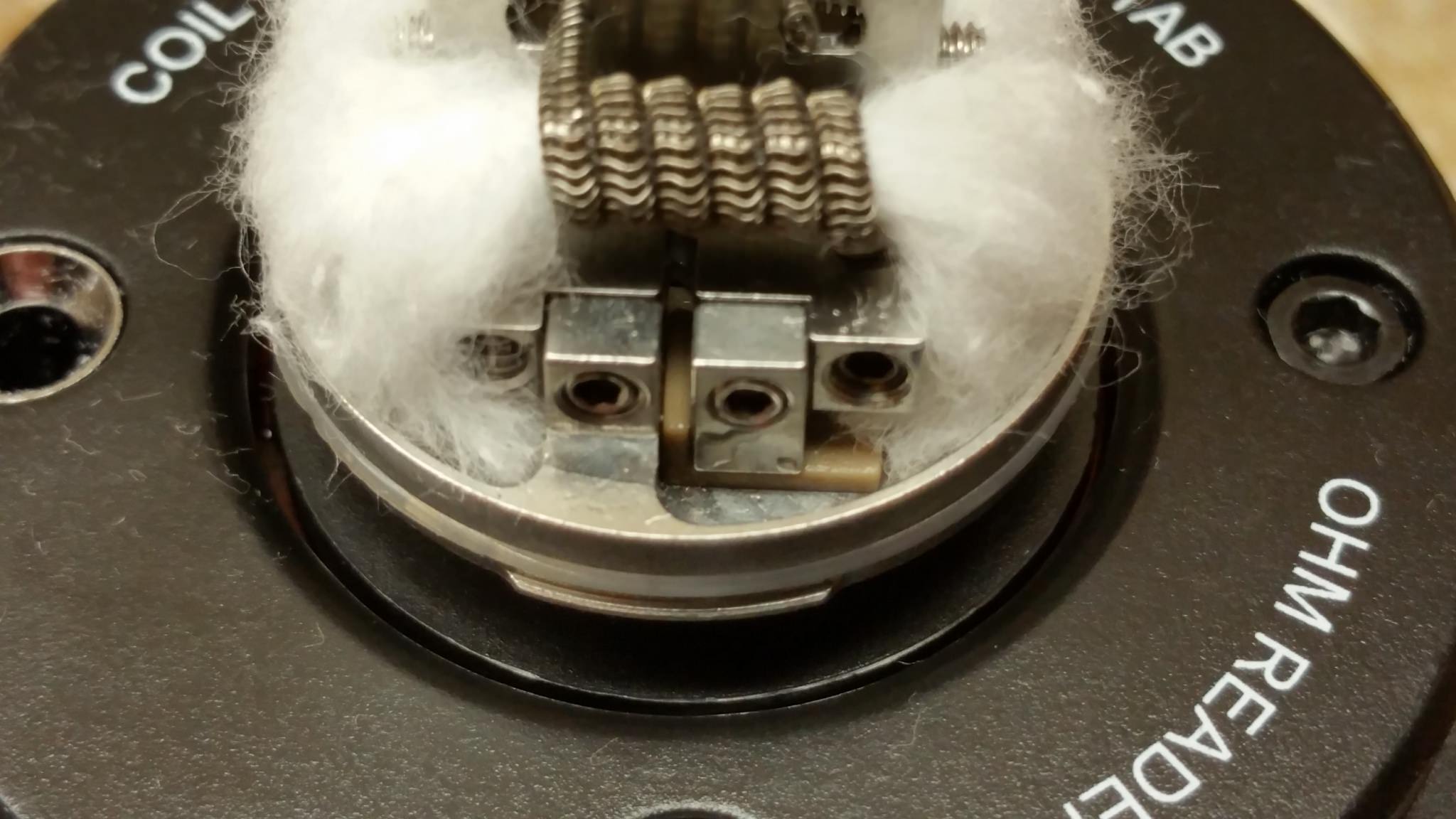 I found it easy to just cut a small piece of cotton and put it down in that area on both sides, a lot easier, no leaks and no adverse effects on the vape. 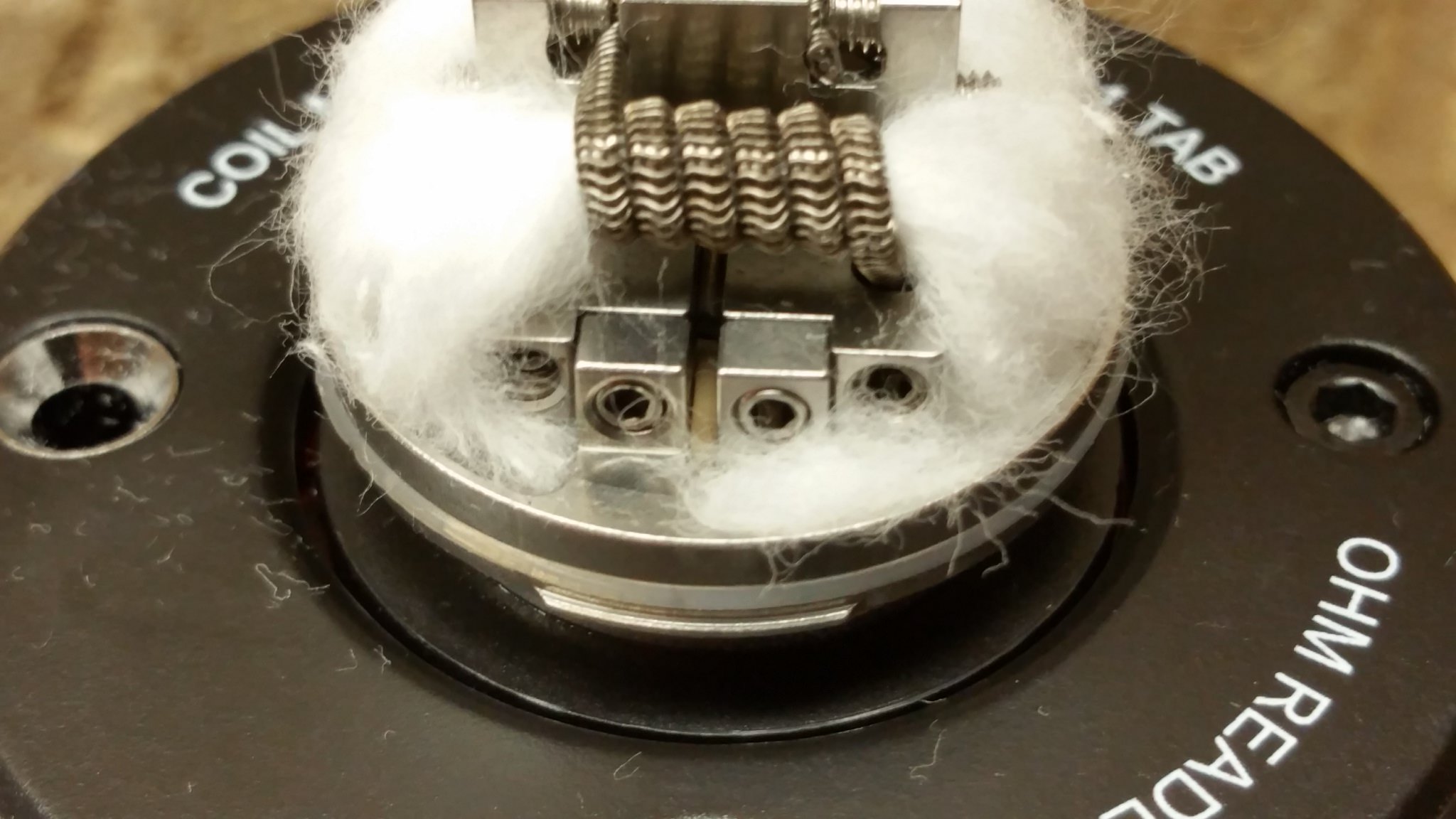 There are several reasons why this would be needed, the main benefits of the series deck would be for mech mod users especially if using a series mech mod. Good idea for Steam Crave to include this as one of the only mods that will handle the size of the tank if the Hammer of God which is a dual 18650 Parallel-Series circuit mech mod putting out a whopping 8.4volts. For this you definitely want to build higher for safety and please for God’s sake know your ohms law and use quality batteries with known measurements by Mooch.

Yep, the center holes on the deck which secure the velocity and series deck can also be used to build a triple coil setup. 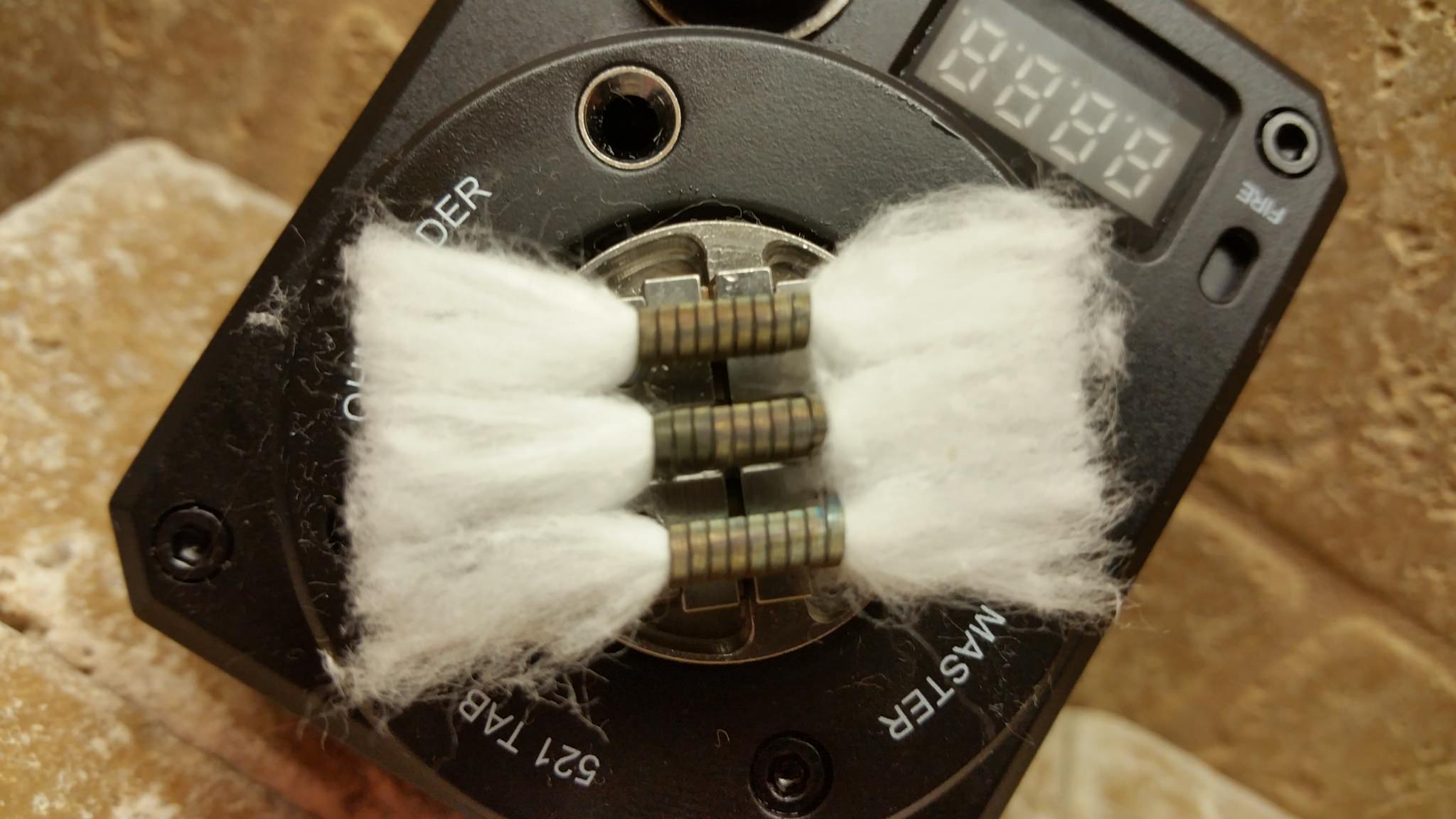 I tried to get the coils as high as I could so I could get the maximum amount of air under the coils. This was especially important for the center coil. 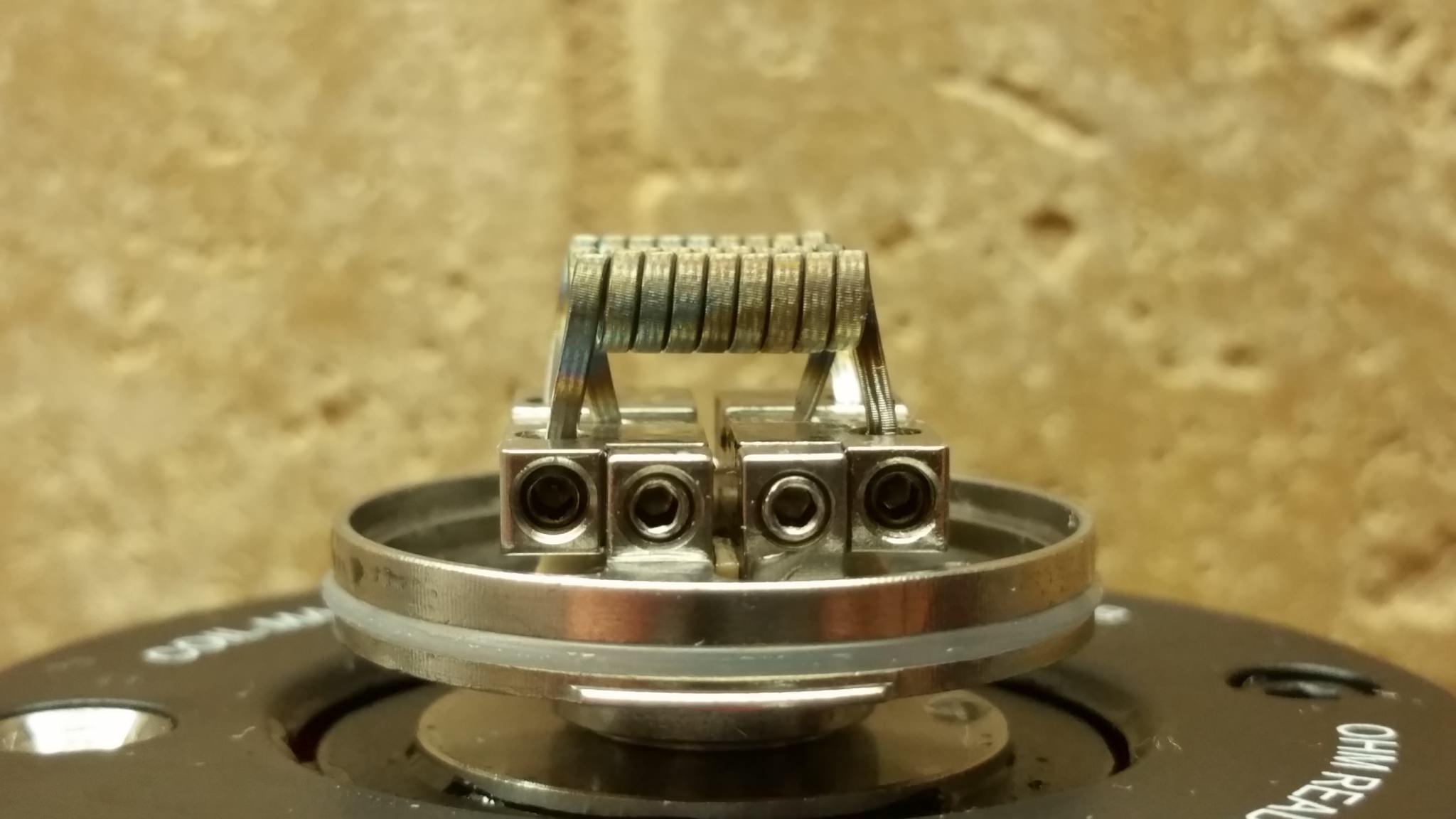 I had to use 9 wraps which is more than usual but this way I wound up with 0.16 ohms when it was all said and done.

Talk about power, 250 watts was no problem albeit a little too hot for my tastes. Around 150 watts with this triple coil setup was about where I liked it and it wasn’t hot at all, just a nice warm vape with clouds for days.

The Triple coil build wound up being my favorite but the dual Aliens were not far behind.

I know a lot of people are going to say clouds sure, but no way you can get any flavor from such a huge tank. I don’t find that to be the case, sure it won’t be as flavorful as some of the best RDA’s on the market but the flavor is there for sure and better than a lot of 25mm RTA’s. The thing is you can build a lot bigger with the Titan, putting the same build as your Griffin tank would not make sense, go big or go home with the Titan.

The Titan lives up to the Steam Crave reputation for excellent quality, the thing is a put together really well but there are a few exceptions.

The Juice Flow Control and Air Flow Control are tight as hell and can be tough to move but when you get them moving they are smooth. I tried lubing them up with juice but after a month of use they are still really tight to get moving.

The grub screws are also below par, one on the first build was already loose and to try and remove it called for a special tool as it was stuck. On my 4th build another grub screw began to give me trouble too so I replaced that one before it got stuck as well. This drove me a little nuts and I plan on replacing all the screws with better quality ones on my next build.

Filling the Titan is a breeze with the huge kidney shaped openings. I didn’t even bother to use the dropper, I just tipped the bottle of juice directly in. If I would have used the dropper it would have probably taken a half hour to fill this juice whore anyway, damn it holds a lot.

So what you gonna put it on?

For now the only thing that is actually available for sale is the Hammer of God mech mod if overhang is something you cannot deal with.

The Laisimo F4 that I recently reviewed here fits the Titan perfectly but a date of release has still not come from Laisimo but am told there engineers are working on it. 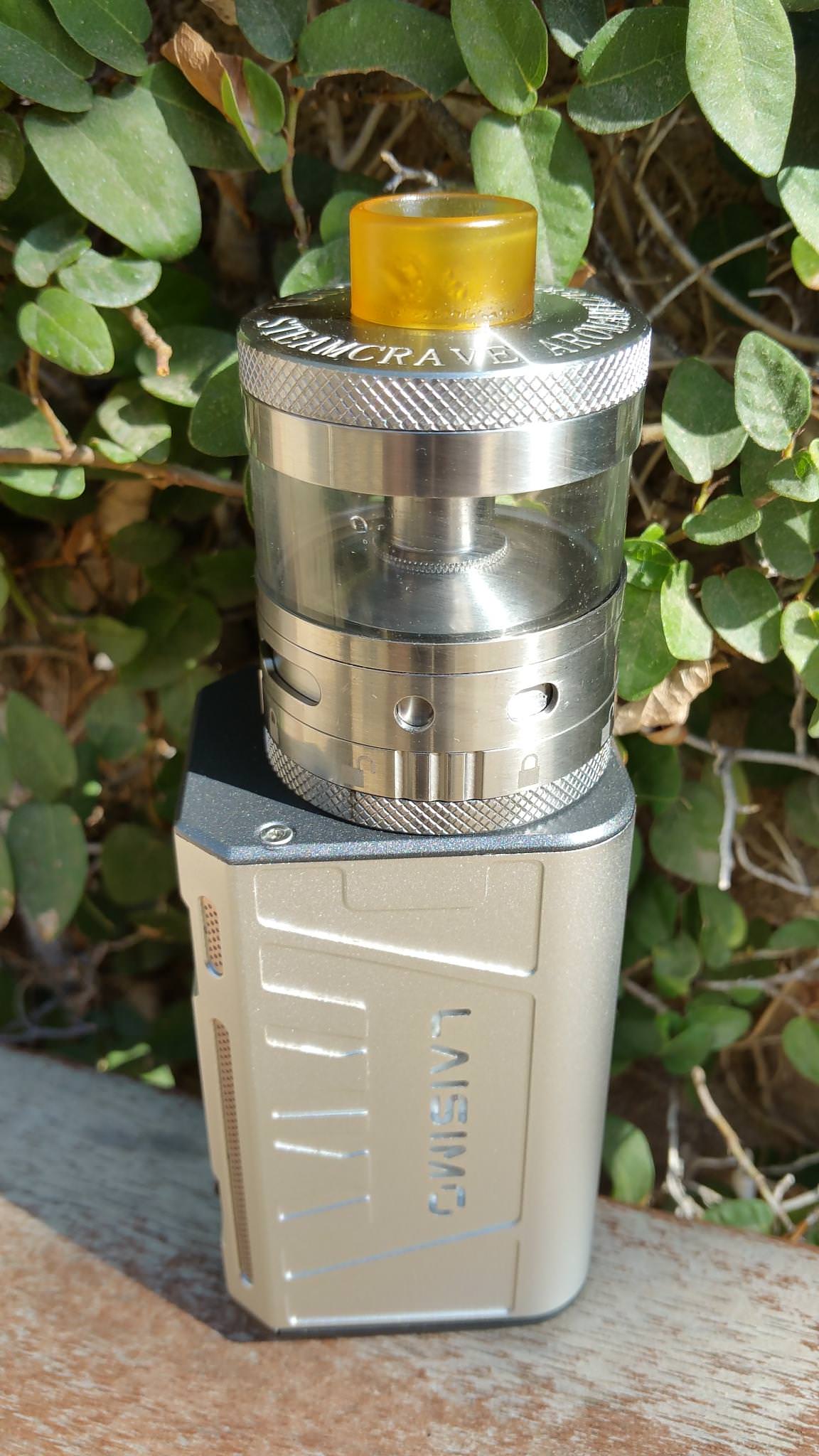 Now I know the Titan isn’t for everyone, in fact it isn’t for the vast majority of vapers out there. It is for the people who love to build though, almost more than they love to vape. Those are the people who will have a ton of fun with the Titan as it probably has the most build options of any tank out there.

The naysayers are going to say no way to get any flavor from a massive tank like the Titan, not true. While it is not the best flavor I have ever gotten the flavor is there. I would say it is on par with something like the Smok TFV12 for flavor. When it RDA mode your not very far from your massive coils so think about it, your gonna get flavor.

It is not practical, looks ridiculous, I must be compensating for something to have such a massive tank….yada yada yada. Yes, yes and YES……It is a lot of fun if you like building though, you will love it. Just get some higher quality grub screws, you will thank me later.

You can find it here in Stainless Steel, Matte Black and Matte Gun Metal https://shop.steamcrave.com/aromamizertitan_p0962.html

Thanks to Steam Crave for sending me this beast for review, damn them too as I will probably be buying the Matte Black soon.

You can follow me on various social media with the links below: